The elderly are at the center of Columbia’s housing crisis 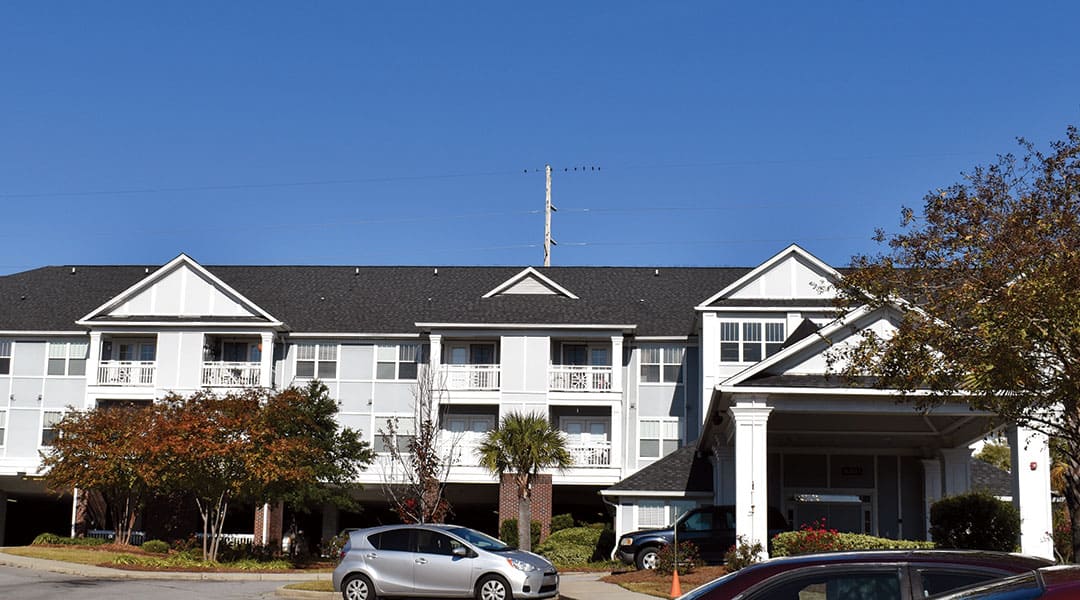 The Rosewood Hills High-Rise is one of the newer housing complexes built by the city. It is reserved for senior citizens and residents had to wait on a waitlist to get accepted.

In the blink of an eye, Louisa Gantt was homeless.

She was working a steady job with a Columbia law firm, a job that she had held for 20 years. In addition to this, she was taking care of her grandson, Larry.

Then, as Gantt says, “Life happens.”

Her husband died, limiting her to a single-person income. Then, the recession happened and she had to dig into her 401k retirement account. To make matters worse, her law firm cut back on her hours. Already struggling, she had to have three surgeries.

Gantt says the last surgery put her over the edge. Although she was still working, she lost her house and she and Larry moved into a motel. After staying for three weeks, Gantt found herself out of money and a week away from payday. She was referred to the volunteers at Family Promise, a faith-based nonprofit that works with homeless families, and they were essential in getting her back on her feet.

While homelessness is an issue that plagues the U.S. today, it is an even more difficult situation for women in their 60s, like Gantt. In situations like hers, senior resources and outside funding can be fundamental in helping senior citizens to live a more comfortable life.

Help from the community

Family Promise is a faith-based organization that brings congregations together to take in homeless families until they are able to provide for themselves.

There are also some organizations that are purely aimed towards senior citizens. The Midlands has a non-profit organization called Senior Resources that, according to their website, benefits more than 4,000 Midlands residents.

James W. Alford receives daily meals through the Meals on Wheels program. He waits by his door every day for the volunteers to show up with his meal.

While these organizations provide material things like food, housing, and clothing, their impact is so much greater than just that.

In just 14 weeks, Gantt was back on her feet and living in her own apartment with her grandson. The program was so meaningful to Gantt that she brought it back to her church and now gives back by helping other families.

The volunteers and employees at Senior Resources work to maintain the independence of senior citizens in the community. By providing daily “check-ups,” transportation, and other assistance, they are still able to live in their homes and take care of themselves. They also offer support and hope to help them get through low points in their lives.

Living on a Fixed Income

While these resources are enough for some senior citizens, others need more assistance.

Despite their career path, elderly people fall in the same position when they retire- they are receiving a pre-determined amount of money every month, and their incomes rarely increase over time. At this point, it depends on all of their life and finances leading up to this point.

Alford, and others, talk about the importance of budgeting and coming up with a plan to prepare for this point in life.

However, preparation doesn’t guarantee that it will make this point any easier. For many, while their income stays the same over time, the housing market prices and costs of rent are constantly increasing.  This is when people rely on national funding to pay for necessities.

The federal poverty level is $12,490, and many senior citizens are falling below that.

According to Columbia’s Consolidated Plan for 2015-2019, the biggest housing problem that Columbia faces is cost burden. A person is cost-burdened when they are spending 30% or more of their annual income on housing.

More than half (55%) of renters in Columbia are cost-burdened due to housing costs.

When elderly people find themselves unable to afford a home, they can apply for national funding from the U.S. Department of Housing and Urban Development (HUD) through the Columbia Housing Authority (CHA). There are two routes that this person may take- public housing or Section 8 Vouchers.

Right now, there are 7,300 people waiting for public housing in Columbia. 10,000 people are waiting to use Section 8 Vouchers.

For many, public housing and the Section 8 Voucher program are viewed as a temporary solution to a large financial problem. Middle-age, able-bodied adults foresee themselves just passing through on a longer journey to owning their own homes. But for elderly people, their journey tends to end in public housing.

Columbia has a housing crisis, and the elderly are finding themselves in the middle of it.

Realization of a need for assistance is just one step in a typically long process. With the high demand for housing in Columbia, it is nearly impossible for HUD and the CHA to keep up with the demand.

As a result of their significantly high demand, there tends to be extra funding and special considerations for senior citizens. Due to the fact that they’re not just “passing through,” but rather, are aging in place, the turnover tends to be very slow in public housing facilities. While they wait for housing to become available, senior citizens and the rest of the applicants are placed on a waiting list. While they wait, they are expected to look elsewhere and make other arrangements.

“It’s not unusual for someone to expect to wait several years,” said Cynthia Hardy, director of communications for CHA.

One woman who lives at the Rosewood Hills Senior Highrise said that it took her ten years to be chosen for assistance.

There are separate waitlists for each housing route. Since both programs are supported by federal funding, the waitlists only open when the funding is available. For those interested in the Section 8 vouchers, the waitlist was last open in 2016. The public housing waitlist for four to five-bedroom units and seniors was opened in 2017 and was open once a month until August of this year.

Due to the extremely high demand for housing and the long periods of time that people must wait for the waitlists to reopen, these lists fill up fast. Once on the list, people will be chosen through a random lottery for housing.

Public Housing in a College Town

Despite their age, there is a relationship between college students and elderly people when it comes to housing, says Pete Neiger, a data analyst for Civitas SC.

They are creating an extremely high demand for housing, and growth is outpacing production.

Both demographics also tend to have a lower and more restricted income.  While students have something similar to a fixed income, they are usually heavily subsidized by parents or student loans. Other than federal help, elderly people typically do not get outside assistance and are very limited on how they can spend their money.

Since landlords and private complexes tend to profit more off of college students, they aim their efforts towards them. For senior citizens who use vouchers, it is not unusual for them to face discrimination based on the fact that they use a voucher. Since there is a high enough demand for housing in Columbia, landlords have little motivation to get involved with Section 8 and they do not have to accept them into their property.  This makes it difficult for some seniors to even find a place to use their voucher, once they finally receive one.

With the increasing number of students at the University of South Carolina, many of the new complexes that are being built are targeted at college students and boast luxurious amenities and increasingly high costs to rent. Since they require national funding, there are very few new public housing complexes that are being built, especially ones specific to the elderly.