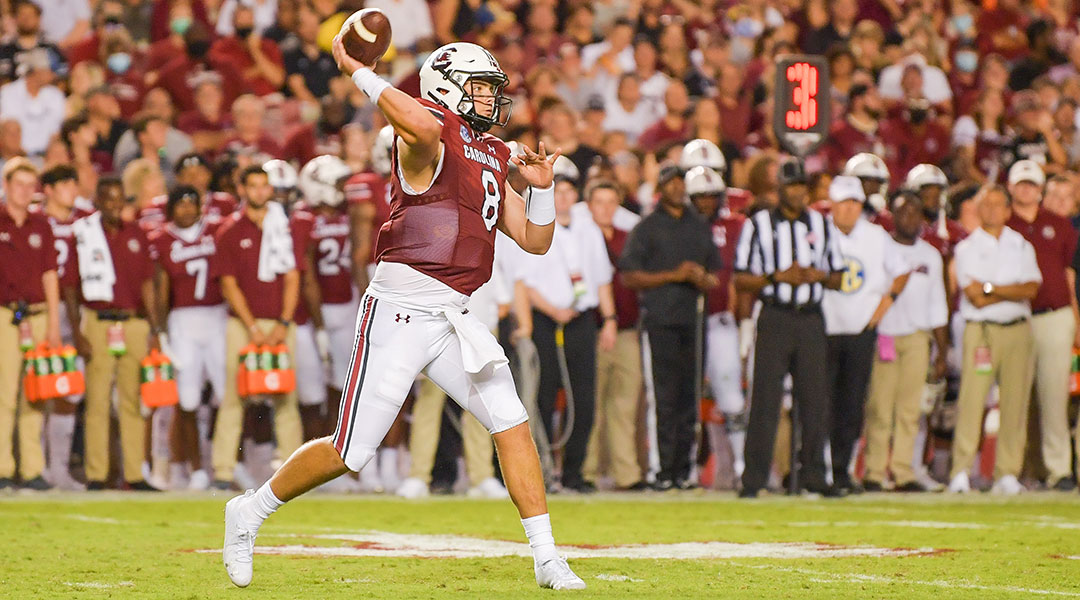 Graduate student Zeb Noland has started three games so far this season and is expected to make his fourth start against Texas A&M this Saturday. Photo courtesy of SEC media portal

When Zeb Noland traded his football pads for a clipboard in June, he never expected to play again.

Little did he know, his playing days were not over yet.

Noland started his football career at Iowa State in 2016 after attending Oconee County High School in Georgia. He then decided to transfer to North Dakota State University in 2019 and played for the Bison through the spring of 2021. Once he left NDSU, that’s when he decided to become a graduate assistant for the Gamecocks, assigned to help with the offense.

During preseason camp, sophomore Luke Doty was expected to start at quarterback for the Gamecocks. However, Doty suffered a foot injury that would keep him on the bench for at least the first two games. Head Coach Shane Beamer and the offensive staff decided they needed Coach Noland to become QB1 Noland.

“He’s got great experience and most importantly he has played in a football game a heck of a lot more recent than anybody else on this team,” said Beamer in a press conference on Aug. 17. “I think he is a great resource for our young quarterbacks right now. He’s played in a lot more football games as a starting quarterback then probably all of them combined at the college level.”

Noland, who started the first three games of the season, is grateful to have another opportunity to take the field.

“I never thought I’d put on the pads again and never get the opportunity to do this again,” Noland said in a press conference after the Vanderbilt game. “I came back just because I love these guys. I truly love every one of them.”

Your triumph rings throughout the land. Father and I are so proud of the entire Gamecock regiment. I send to you a portrait of true love and adoration. Treasure it always.

After Noland and the Gamecocks went 2-0 in their first two games, they traveled to Athens to take on the Georgia Bulldogs. Noland started the game but suffered an injury on the first drive and didn’t return to the game. Now recovered, Doty took his place and once again, Noland thought his playing days were over.

The Gamecocks were 3-3 entering Saturday as they took on the Vanderbilt Commodores at Williams-Brice Stadium.

As the game progressed, the offensive line struggled to protect Doty. Down by one touchdown late in the fourth quarter, Beamer decided to give Noland another shot at leading the Gamecocks to victory.

Noland led an eight play, 75-yard drive that ended in a nine-yard touchdown pass to Xavier Legette, resulting in a win for the Gamecocks.

“Surreal, it’s those moments you dream of as a kid,” said Noland after the Vanderbilt game. “I’m in my, whatever, year of playing and you still dream about those moments, even at practice every day, you think about making those throws.”

Senior defensive end Kingsley Enagbare said he wasn’t surprised by what he has seen out of Noland.

“It was definitely a great moment,” Enagbare said after the Vanderbilt game. “Just Zeb being Zeb. He started as a coach and ended up becoming part of the team as a player. And just his leadership, his composure throughout this whole time of him being on our team or being a part of our team as a player.”

Beamer announced during his teleconference on Sunday night that Noland would be the starter for the upcoming game against Texas A&M.

“I lay down at night and I think to myself, holy cow, put the pads back on, and just soaking it all in,” said Noland in a press conference after the Eastern Illinois game.

“The last time I took my pads off, I looked down, and cut my tape off, and I was like, ‘this is the last time I’m ever going to do this.’ It hit hard and I didn’t want to leave and say goodbye to all my teammates. But I got great teammates here, and they have accepted me with open arms.” 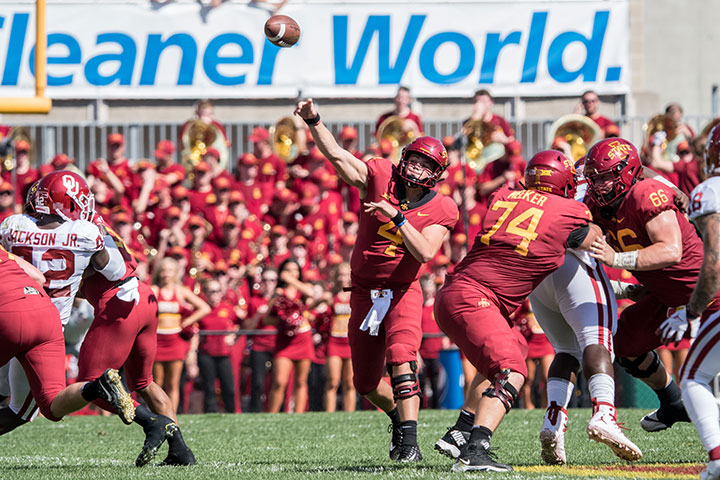 Noland threw for 360 yards and two touchdowns versus Oklahoma in 2018. Shane Beamer was the tight ends and H-backs coach for the Sooners in 2018. Photo courtesy of Iowa State Athletics Communications 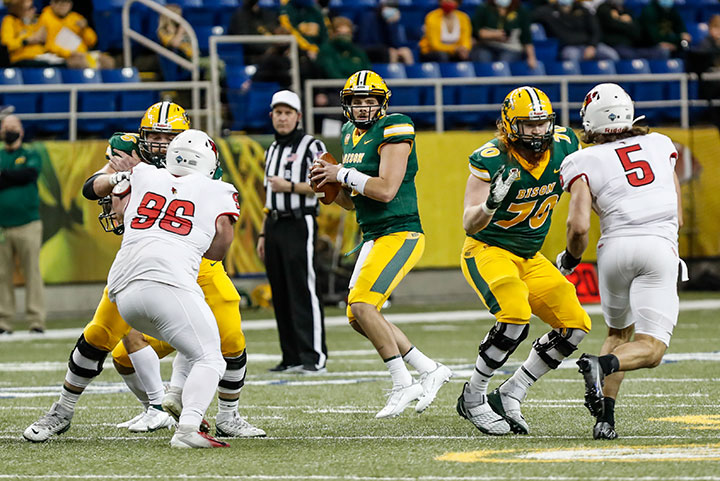 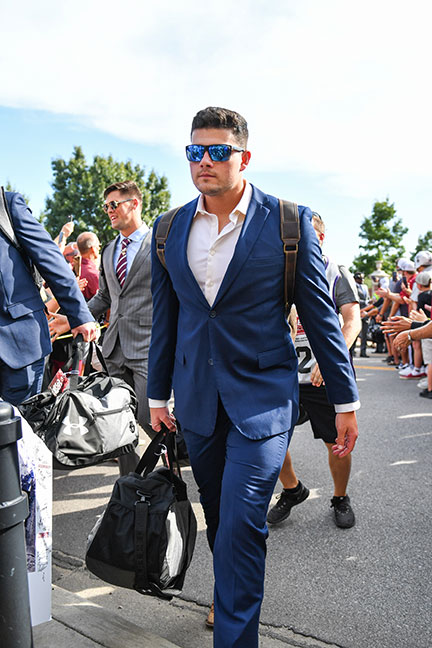 Noland confidently walks through Gamecock Walk after arriving at Williams-Brice prior to the Eastern Illinois game. 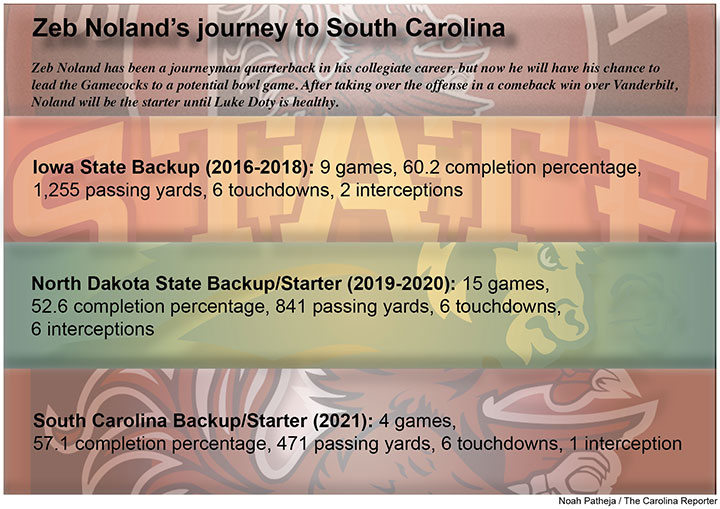