A look into “the most exclusive club in Columbia” 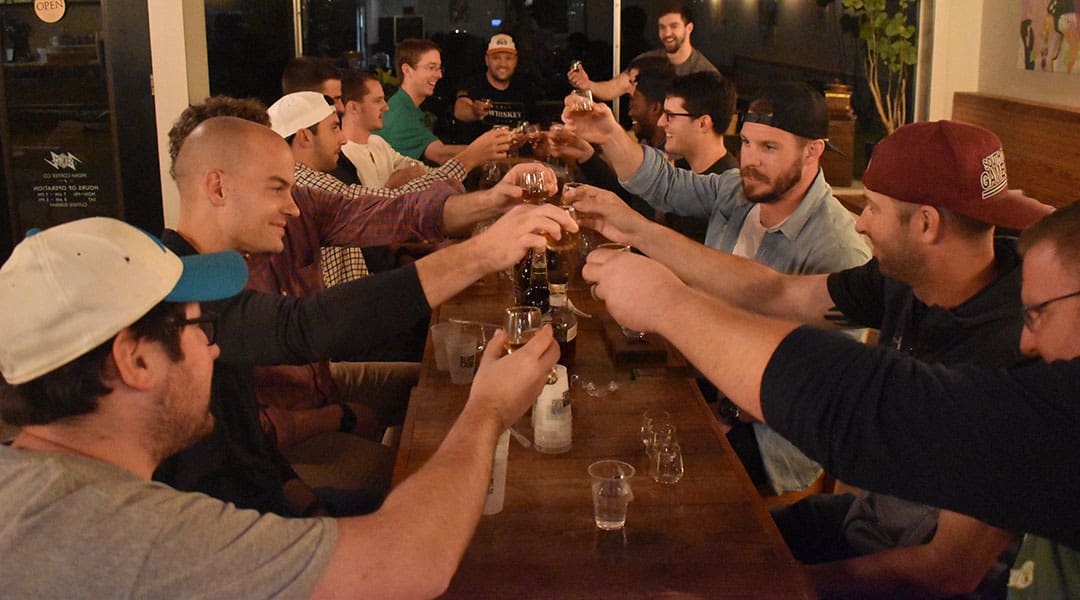 Cola Whiskey Club has grown to more than 20 paying members and are joined by guests of members at every meeting. The club started in founder Michael DeVita’s backyard a few years ago.

The first Monday of every month a group of men gather after hours in a dimly lit coffee shop in Columbia’s historic Cottontown neighborhood. They’re drinking something a little stronger than coffee though.

“This is the most exclusive club in Columbia — so welcome,” Michael DeVita tells visitors. DeVita is the founder of Cola Whiskey Club.

He looks around at the group of nearly 25 men, members and guests, and explains to the newcomers the informal rules of the club.

“This is a place for dudes just to be dudes.”

Cola Whiskey Club started in DeVita’s backyard a few years ago. The group formalized nearly a year ago and has more than 20 paying members now.

Tonight, it’s a little different. The men sit around a length of wooden tables they’ve pushed together at Indah Coffee, a coffee roaster planted in an industrial section north of Elmwood Avenue. In front of each member’s place, a handcrafted, wooden flight tray is arranged with tasting glasses.

DeVita is seated near the middle of the group with five bottles of whiskey carefully arranged in front of him.

Three of the bottles DeVita brought with him, two of them were supplied by other members. On this night, they have a bottle created by actor Matthew McConaughey, a limited release of Maker’s Mark, a bottle of Old Forester Single Barrel Bourbon, a bottle of Belle Meade Cask Strength Reserve Bourbon and a once per year release from a Utah’s High West Distillery called Yippee Ki-Yay.

Dave Crossland says buying better whiskies like these is one reason the club has formalized and has members pay dues.

Crossland helped DeVita start Cola Whiskey Club. He was a part of the original gatherings in DeVita’s backyard. They weren’t just drinking whiskey then.

“We were meeting once a week. One week we’d do whiskey, the next week we’d do beer and so I was on the beer side of it,” Crossland says.

He had a home brew kit and was making his own beer. The group would grab a six pack of a craft beer and sip on it. Crossland says once the group really got into whiskies, he realized that he favored whiskey more than beer.

Crossland contributed the bottle of Belle Meade to the gathering. As is tradition, he takes the bottle he brought, tells a little of the backstory of the whiskey and why he brought it, opens the bottle and passes it around.

The men make a toast and take a swig.

At the end of the table in a dark corner, wearing a ball cap and a Cola Whiskey Club T-shirt, Nick Hauser takes his sip. He looks around at the men on his end of the table and takes another. He likes it. It will turn out to be his favorite whiskey of the night.

Hauser is the owner of Indah Coffee. He can’t recall where he met DeVita, but he said they began talking about coffee, which led to whiskey.

Hauser is attracted to finding out why he likes different flavors. He likes to reflect and think about what makes one thing stand out from another.

“I think it’s really enjoyable to kind of slow down — it’s been a busy day today — and kind of think on what are some of the little details that make an experience great,” Hauser says.

He loves the exercise of sensory analysis, scientifically unpacking the tastes he experiences. He compares it to working out. He said you get more tuned in when you pay attention to little things and dive into something.

As the club moves to sampling a bottle of Maker’s Mark’s 2019 limited release Wood Finishing Series, Hauser breaks out a stave from a barrel of Jack Daniel’s for the club to smell. Staves are the thin pieces of wood that form a whiskey barrel. The verdict from the table is that it smells like burnt wood.

Making the connection between coffee and whiskey isn’t exclusive to Hauser. Will Unthank, a newcomer to whiskey, said the two taste experiences are very similar.

Unthank joined Cola Whiskey Club because he was invited by Hauser. He attended one of the club’s first official meetings and was hooked on the camaraderie, but he couldn’t taste flavors in the whiskey.

“All I tasted was alcohol,” Unthank says.

“When I first tasted coffee it made me awake,” Unthank recalls. “It took me a little while to start tasting the underlying flavors of coffee and it was very similar to whiskey.”

As the men sip, different conversations pop up along the table. Their conversations are about the whiskey, about work and about life.

There’s a cop speaking with a preacher, a coffee shop owner having a conversation with a paper mill worker and a real estate agent talking to a medical student. Most of the men are around 30, but some are much older and some are much younger. They’re all whiskey drinkers together.

“It’s turned into a great outlet for guys to come and hang out and meet new people and network and be with a group of guys they’re not typically around,” DeVita says.

Matt Torchia joined Cola Whiskey club at the launch of the formal club. He said DeVita reached out to him and he latched on.

“I kind of took it as an opportunity to really kind of meet new people because it’s easy to stay in your clique I guess you could say and it’s hard for people to branch out,” Torchia says. “That’s really why I kind of came along.”

Torchia got into whiskey because of his mom. After he and his siblings were adults and out of the house, his parents started giving bottles as gifts. Torchia says he uses what he learns in whiskey club as a way to connect to his family. He shares his experiences in the club with them.

Torchia and DeVita share a passion for finding new whiskies. They take great joy in hunting down something new, interesting or hard to find. Torchia doesn’t dismiss the quality of familiar brands.

“Some of my favorite whiskies are ones you can pull of the shelf any day of the week,” Torchia says. “There’s a lot of just really good whiskies out there; don’t be afraid to go through and try a lot of stuff.”

As the night rolls on, the men enjoy their drinks and turn their attention back to the center of the table.

DeVita reads a review of the whiskey they’ve just tried and speaks of the flavors the distiller says are in the whiskey. They exchange small fist bumps and celebrate those around the table who tasted what the description says they should taste. DeVita tells the score of the drink from different whiskey reviewers, then they move to the next bottle.

DeVita said he doesn’t quite know what’s next for Cola Whiskey Club. He said the club is growing by a member or two each month. The club has remained invite-only — a member can invite a guest — so that they’re able to manage their growth. DeVita believes that Cola Whiskey Club could be a force in the future.

“A particular goal I have is that it would be around a long time and it would become kind of a staple of Columbia,” DeVita said.

As the night wears down, the men go around the table one-by-one and describe their favorite drink of the evening. They pour themselves another taste from their favorite bottles, clink their glasses, and enjoy one last drink. 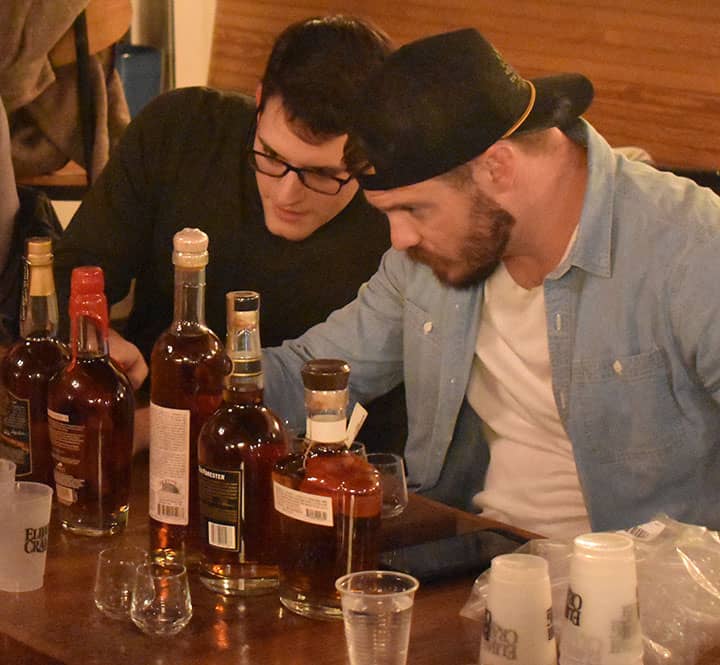 Cola Whiskey Club member Will Unthank, left, fell in love with the Limited Release Wood Finishing Series made by Maker’s Mark. Club founder Michael DeVita tells him Maker’s Mark released this series in October of 2019 nation-wide. Only 255 barrels of this bourbon was produced. 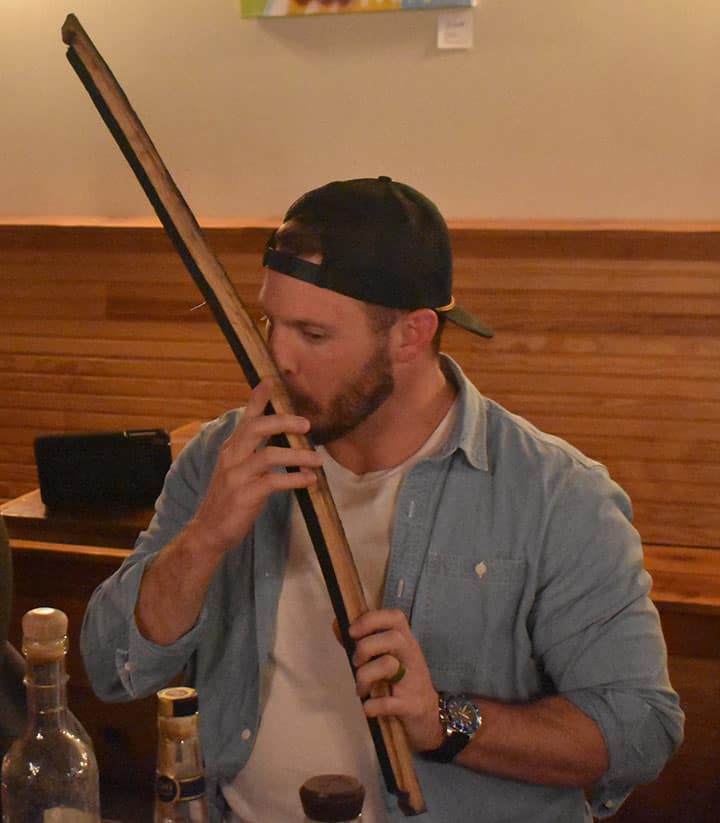 As Cola Whiskey Club samples Maker’s Marks’ brand new Wood Finishing Series, club members break out a stave from a barrel of Jack Daniel’s to smell. Club founder Michael DeVita takes the first whiff. This edition of Maker’s Mark puts staves inside of the barrel to enhance the flavor during the aging process. 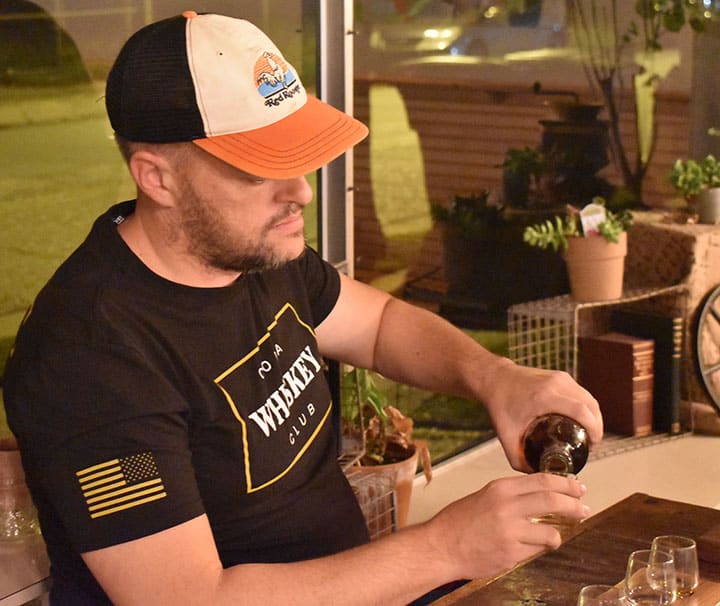 Cola Whiskey Club hosts its meetings at Indah Coffee. Nick Hauser, Indah Coffee owner and club member, enjoys the science of finding the notes of flavor in both coffee and whiskey. 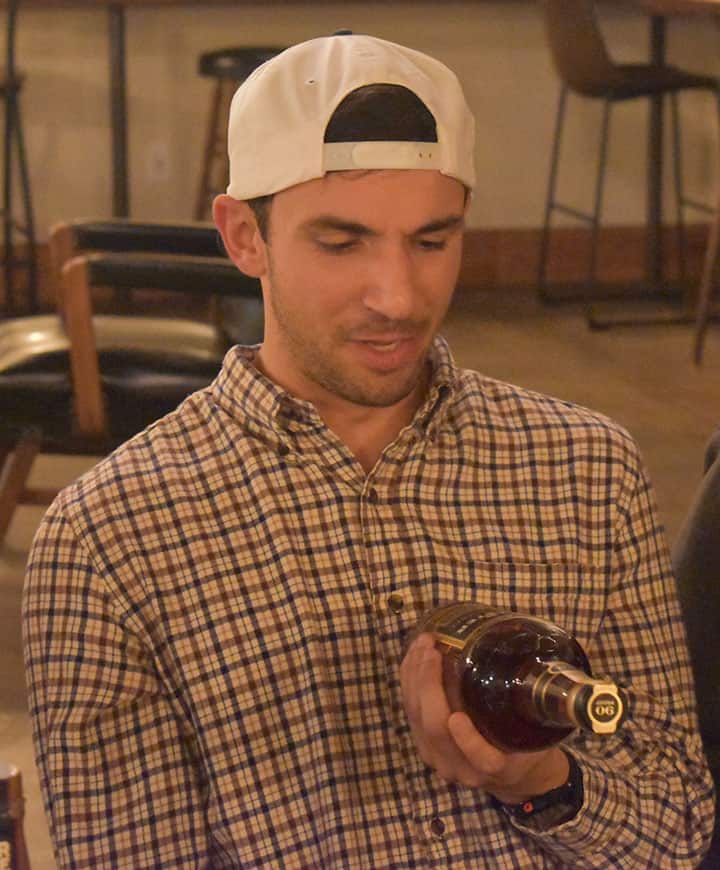 Matt Torchia joined Cola Whiskey Club in the early days of its formalization. Torchia got into whiskey because his mom started giving bottles as gifts.