A national champion coach takes on the State House 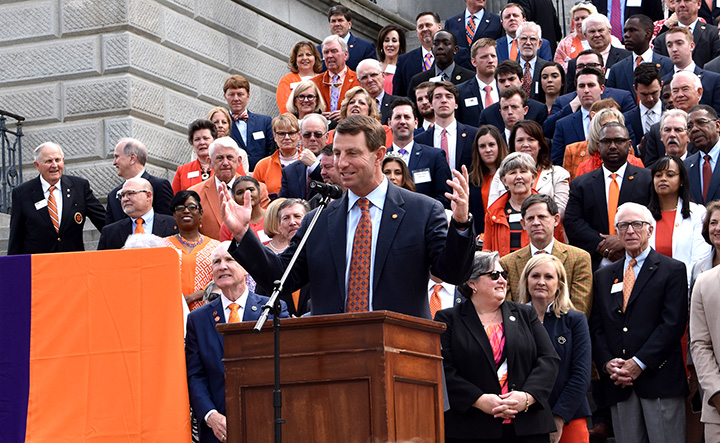 Clemson football coach Dabo Swinney addressed Clemson fans and alumni on the steps of the State House to thank them for their constant support.

A sea of orange flooded the State House Tuesday afternoon as lawmakers and Clemson fans saluted Clemson University football coach Dabo Swinney, who led the Tigers to their second national championship in January.

Swinney received a standing ovation and thanked legislators for their investment in education in South Carolina. He was accompanied by Clemson players Tavien Feaster and Will Swinney, his son.

“Football unifies. Football is a game, but it is one that provides us with a road map of things we can accomplish when we believe, when we love and when we sacrifice in the pursuit of common goals,” Swinney said as he addressed a joint session of the Legislature on Clemson Day at the State House.

Swinney stressed the importance of education over athletics and said he wants to use the success of the football team to elevate not only the university, but the state as a whole.

“The student part is the financial security for the rest of your life,” Swinney said. “The  athlete part is just those extra skills that help you compete a little bit better.”

Those in attendance agreed that the recent national championship win elevated the state and “boosts morale.”

“Even people that aren’t Clemson fans benefit from what happens at Clemson. This should bring us all together as South Carolinians,” said Martha Neal, a life-long Clemson fan.

Neal, accompanied by her niece Emily, a 2017 Clemson graduate, attended the 2017 and 2018 national championship games. Emily Neal missed the State House celebration in 2016 because of her class commitments and told her family, “we are going this time, we are not missing it.”

Following adjournment, Clemson alumni, fans and trustees met on the steps of the State House to unveil the national championship welcome sign that will be place at the entrance to the city of Clemson.

“We couldn’t be more proud of the accomplishments of the university and Coach Swinney with his awesome leadership and inspiration to others,” Hall said.

Swinney has used his high-profile platform to praise his players, university and state.

“We’re all on the same team, we’re all South Carolinians,” said Swinney. 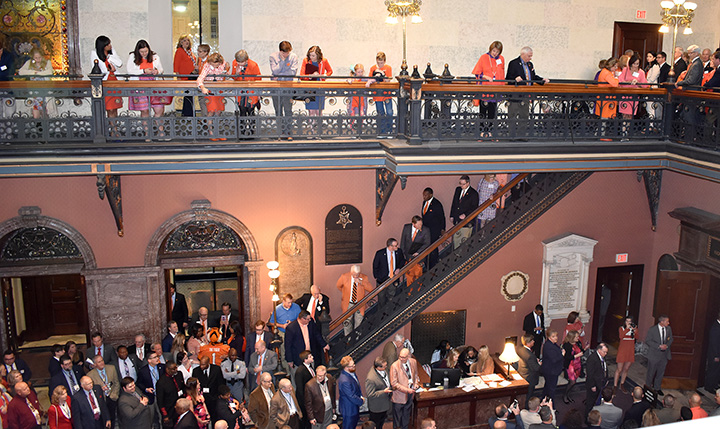 Clemson fans decked in orange and purple took over the State House to hear Dabo Swinney address the session of the legislations.

The House was open for all spectators, mostly dressed in orange, including Clemson’s mascot The Tiger.

Christy Hall, state secretary of transportation, presented Clemson Coach Dabo Swinney and Clemson University with the new road sign marking the national championship wins. It will be visible from I-85.

Following the joint assembly at the State House,  fans and The Tiger mascot took to the State House steps to celebrate the national championship win.