After bumper 2018 harvest, peach farmers prepare for next spring

While peach season is technically over and autumn crops now headed to market, grocery stores around the state are still carrying modest stacks of the stone-fruit, thanks to this year’s particularly robust peach crop.

The fruitful peach harvest of summer 2018 was a much-needed rebound after the state lost the majority of its crop to an unusually late frost in 2017.

“A freeze affects everything all the way down,” Roger McCarter, partner of the produce wholesaler Red Rack Boys, said. “We went from a season last year where we lost maybe 70 percent of the crop across the state to a season like this summer’s where we’re selling 70,000 baskets. This year’s peach harvest was as good as any we’ve had in the last five years.”

McCarter has worked in the Red Rack Boys warehouse at the South Carolina State Farmers Market for ten years, unloading crates of peaches and other fresh produce to sell to grocery stores and other buyers. The peaches he sells at the market are sourced in South Carolina, from local farms such as Titan Farms in Ridge Spring.

The largest peach grower in the southeast, Titan Farms’ peach orchards cover over 6,200 acres, and produce “as many or more” peaches as the entire state of Georgia. Their presence in the South Carolina peach community is a large one, with their orchards supplying several grocery stores and a few fruit stands and their crop creating business in many industries.

“The crop loss that we had last year not only affects our farm but is a ripple effect — you have to think about the number of workers that we bring in to our community who we weren’t able to bring to harvest our crops,” Titan Farms Director of Packing Operations and Food Safety Ross Williams said. “The transportation community [was affected]. We weren’t booking as many truckloads so there was reduction in fresh produce movement out of our area. And then grocery stores obviously did not benefit from stone fruit movement.”

That loss across industries was remedied this year with 2018’s abundant peach crop, one that is leaving South Carolina grocery stores with some peaches available even into late September. While not one of the top ten agricultural commodities in the state, peaches are an important part of South Carolina’s economy. A good year for the South Carolina peach industry generates around $90 million, and the state’s economy reflected the fruit’s economic impact after the successful 2018 harvest.

“When we don’t have peaches, retailers have to pull peaches from surrounding states or from California and that adds cost,” Kyle Tisdale, a marketing specialist for the South Carolina Department of Agriculture, said. “When we have peaches, it fills that spot where we’re supposed to have peaches and it helps not only locally but also nationally, because South Carolina is the second largest peach producer behind California.”

Peach farmers in the state are not spending time dwelling on 2018’s ample crop, however. Peach harvest in South Carolina runs from May to September, and as soon as harvest for this year ended, farmers began preparing for next year’s crop.

In addition to readying the soil by adding lime, gypsum and various fertilizers, farmers are conducting field cleanup and preparing for new wintertime plantings as well. With the average lifetime of a peach tree ranging from 13 to 15 years, it is crucial that fields are rotated in and out of production each year.

“The peak production of a peach tree is typically between year six and nine,” Williams said. “The production per acre gets down to a certain point where it just makes sense to go ahead and push that field out. We’re actually pushing those orchards up and preparing the land in the wintertime.”

In addition to thorough preparation on the part of the farmer, peach trees require delicately balanced environmental conditions in order to flourish. As evidenced by 2017’s ruinous late freeze, seasons must flow in a certain pattern to allow trees the proper time to rest in a dormant state over the winter months, blossom and, finally, produce fruit.

“Peach trees need what we call chilling hours and chilling hours are essentially hours below 45 degrees for the tree to go into dormancy and really just to get the proper rest it needs in order to produce a good crop,” Williams said. “Each variety has different requirements but the majority of our varieties need between 800 and 1,000 chilling hours to produce a pretty good crop. We will start recording those typically mid-November and then we stop recording them at the end of February.”

The reliance of peach trees upon a set of proper conditions each year leave the success of a peach crop not up to farmers, but instead up to environmental factors. With two very different years of peach harvests behind them, all those involved in the South Carolina peach farming industry can do moving forward is hope for the best.

“It’s a crap shoot,” McCarter said. “You have to wait every year ‘till the end of April and see if you’re going to get a freeze or not. It’s a gamble every year.” 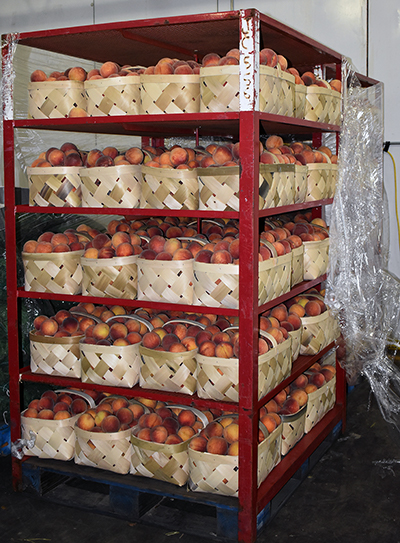 The Red Rack Boys are produce distributors located at the South Carolina Farmers Market. Their name comes from the signature red racks where the produce in the warehouse is stored. In 2017, peach farms in South Carolina lost a majority of their crops due to a late spring freeze. The peach crop in the state rebounded, however, in 2018 and farmers are hoping to see another successful crop in 2019. 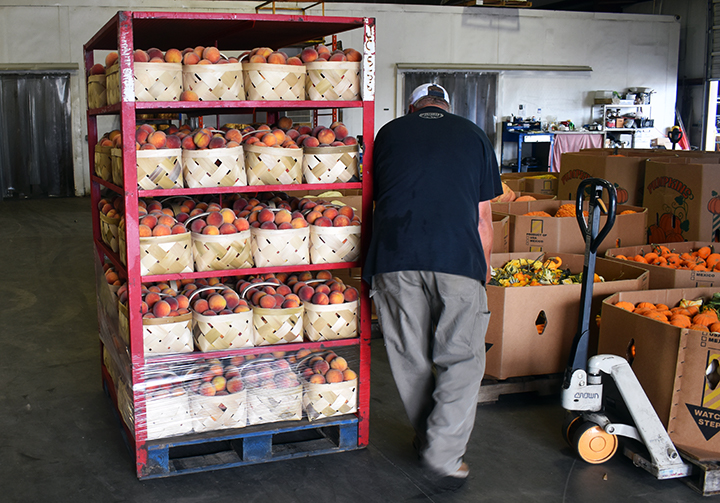 Roger McCarter has worked in the Red Rack Boys distribution center at the South Carolina State Farmers Market for ten years. Here he wraps some of 2018’s last peaches in protective plastic to ready the fruit for transportation to a local grocery store. 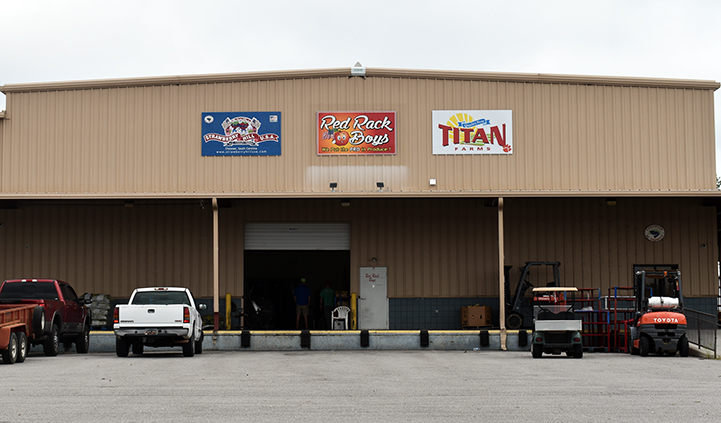 Distribution centers like the Red Rack Boys at the South Carolina State Farmers Market get fruits and vegetables from farms around the state and sell the produce to grocery stores and other customers. The Red Rack Boys buy their peaches from Titan Farms, the largest peach grower on the East Coast. 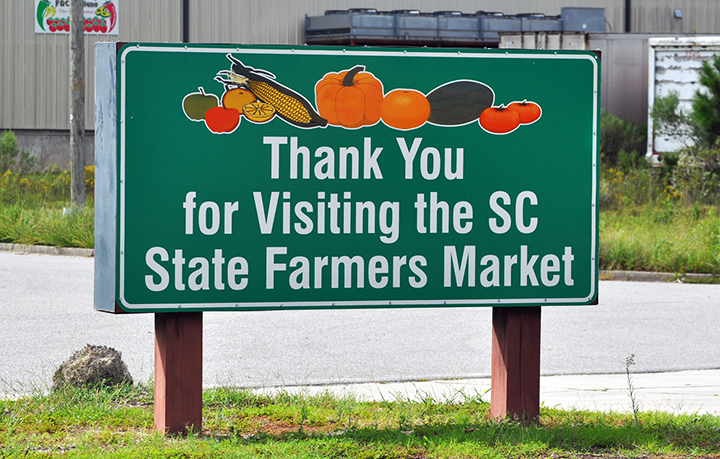 The South Carolina State Farmers Market has almost all fruits and vegetables available to South Carolina stores and restaurants. Peaches are one of the most profitable crops at the market.