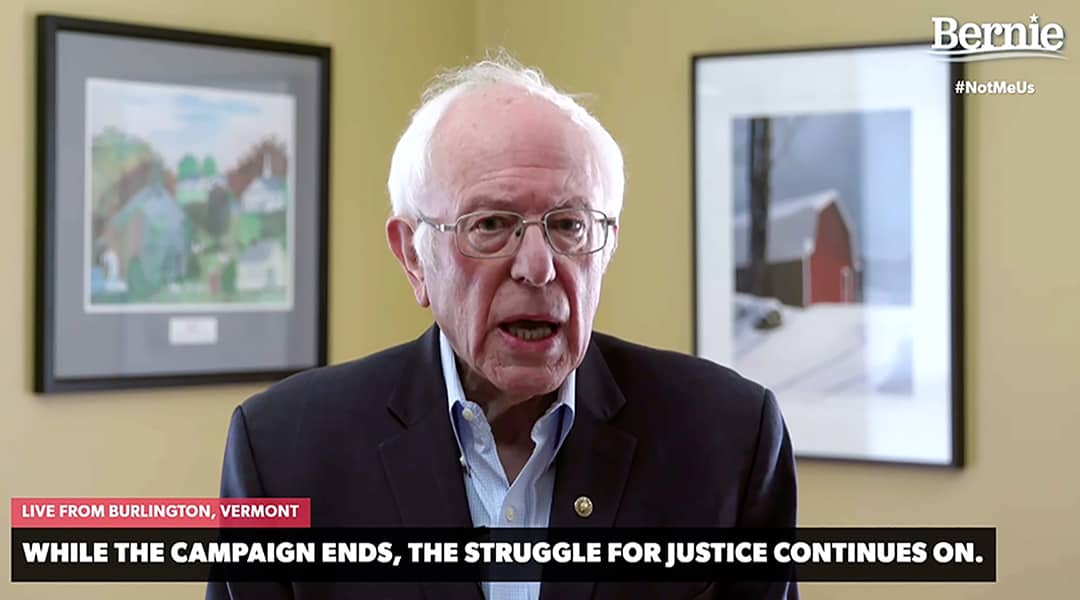 Vermont Sen. Bernie Sanders ended his campaign for the 2020 Democratic presidential nomination Wednesday morning. Former Vice President Joe Biden is now left with a clear path to the nomination, which will be announced at July’s Democratic National Convention.

Sanders, who had assembled a passionate army of supporters over two presidential campaign cycles in his bid to reshape American progressive politics, addressed supporters via livestream Wednesday at a critical moment in American history where millions are sheltering in place because of the worldwide coronavirus pandemic.

“I cannot in good conscience continue to mount a campaign that could not win, and which would interfere with the important work required of all of us in this difficult hour,” Sanders said. “While this campaign is coming to an end, our movement is not.”

Sanders, a quixotic independent who became an unlikely spokesmen for millions of young voters in 2016 and 2020, was an early frontrunner for the nomination, tying for first place in February’s Iowa caucuses and winning New Hampshire’s primary and Nevada’s caucuses. However, disappointing losses in South Carolina and other Southern states contributed to his momentum loss as the race continued.

“We didn’t have the highest expectations coming out of South Carolina in the beginning, but 19% of voters in the state said they thought we needed more progressive policies,” Hart said. “South Carolina thought harder, and they thought about their neighbors.”

In March, Sanders suffered more losses to Biden in key states like Michigan and Florida. As the coronavirus pandemic intensified, both candidates shifted to campaigning via livestreams and television appearances in order to continue promoting their platforms among voters.

Sanders faced criticism from other members of the Democratic Party and more moderate voters, who claimed the self-identified democratic socialist was too far left. Many saw him as a spoiler in 2016 for his relentless bid to wrest the nomination from Democrat Hillary Clinton, who was considered a shoo-in for the presidency, only to be defeated by Donald Trump.

On Wednesday, President Trump tweeted about Sanders’ departure, suggesting that Massachusetts Sen. Elizabeth Warren and other Democrats had spoiled the race for Sanders and urging the “Bernie people” to join the Republican Party.

“If  not for her, Bernie would have won almost every state on Super Tuesday! This ended just like the Democrats & the DNC wanted, same as the Crooked Hillary fiasco. The Bernie people should come to the Republican Party, TRADE!”

Sanders ran on a progressive platform, advocating for “Medicare for all,” free college tuition and a wealth tax on U.S. households with a net worth of more than $32 million. He lambasted the millionaire class – and the politicians in their pockets – for repeatedly enacting laws that favored the rich over the working class.

“We have never been just a campaign,” Sanders said. “We are a grassroots, multi-racial, multi-generational movement which has always believed that real change never comes from the top on down but always from the bottom on up.”

Sanders said he will remain on ballots for the rest of the 2020 Democratic primaries. Alaska’s April 10 primary is next, followed by Wyoming on April 17 and Hawaii on April 22. All three primaries will be conducted by mail-in voting due to the coronavirus. 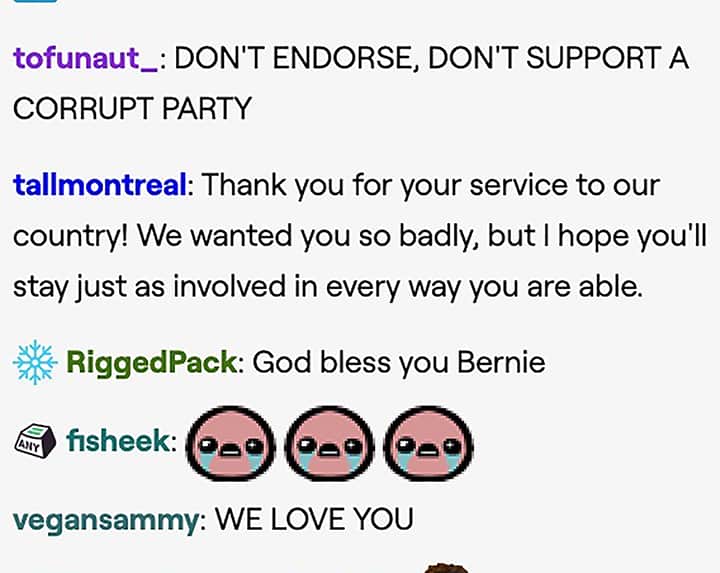 Viewers posted many comments during Bernie Sanders’ Wednesday livestream expressing their support for the candidate.