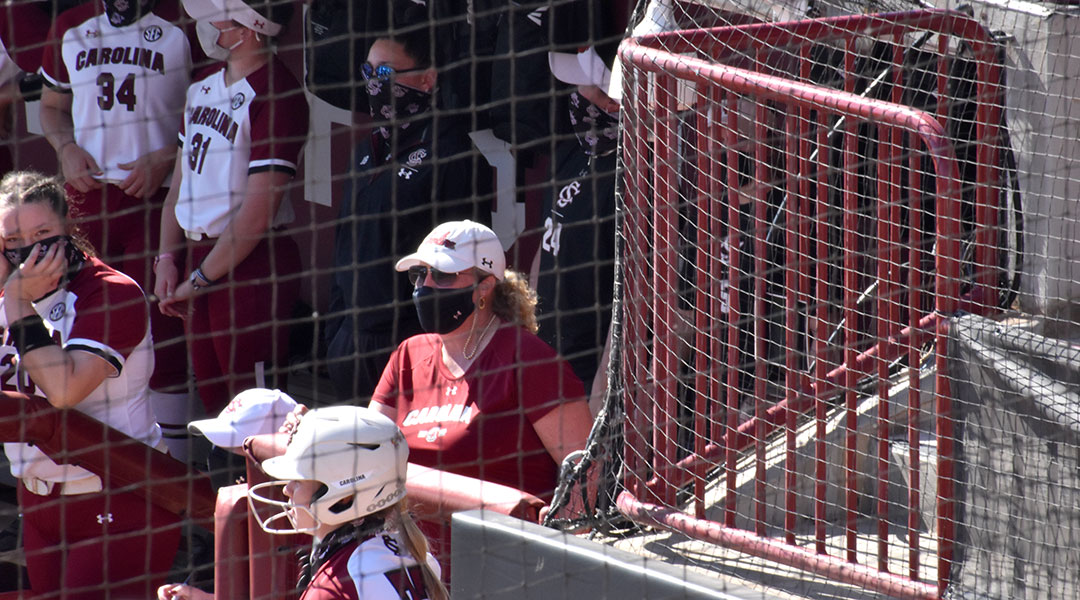 Beverly Smith is in her 11th season at the helm of South Carolina Softball. Photo by: Brandon Alter

Recruiting in 1990 was different than it is today.

Beverly Smith, a high school pitcher out of Houston, didn’t have her own website to showcase her highlights like many recruits in 2021 do. All she had was a VHS tape that her dad recorded. She sent that tape to Donna Papa, the head coach at the University of North Carolina.

In March 1990 Smith took an official visit to Chapel Hill, about two hours north of where her grandmother lived and her father was born in Elizabethtown, N.C.. In April, Smith signed on to be a Tar Heel before Papa ever saw her play.

From 1991-1994, Smith became a standout player for the Tar Heels. Culminating that senior season when she became the first player at UNC to win ACC player of the year. She threw two no-hitters that season. However, looking back that isn’t what Smith, now the head coach at South Carolina, remembers most about her playing days.

“I remember when we would get lost on trips and funny stories with teammates,” Smith said. “And I think I try to impress that onto our team too, is that it’s really when you look back after the years it’s about the relationships and the memories you have with your teammates. And I think that was true for me too.”

On Saturday, Smith and the Gamecocks will go head-to-head against Papa and the Tar Heels. Smith has yet to defeat her former boss away from Columbia. Since Smith’s move down south, South Carolina and North Carolina have faced off seven times. Four times in Columbia, all South Carolina wins, twice in Chapel Hill, which the Gamecocks have lost by a combined 15-3, and once at a neutral site, a 4-0 Tar Heel victory. These games have some added emphasis from Smith’s team, according to S.C. second baseman Mackenzie Boesel.

“We always talk about how ‘all games count one,’ but when we play UNC, that game counts two.”

Smith’s name is scattered through the Tar Heel record book as she was a two-way force. Offensively, she sits tied for second, seventh and 10th for triples in a season, tied for 10th in total bases for a career with 331, seventh all-time with 137 career RBIs and second in career triples with 27.

“You don’t always find players that can do all of that at a level she did,” Papa said.

In the circle, she is tied for 10th with 11 shutouts in a season, seventh best career ERA at 1.45, tied for seventh with a .688 winning percentage (44-20), eighth in career shutouts with 24 and fourth in opposing batting average with a career mark of .188.

“Coach Bev doesn’t like to brag on herself,” Boesel said. “So, she hasn’t really given details on that, but I would love to hear some details about that for sure.”

A moment Papa recalls is a game against UNC Greensboro.

Smith wore a Carolina Blue bow barrette with a Tar Heel on it for every game. Except this one.

“It was one of my superstitions if you will,” Smith said. “And this umpire told me I couldn’t have the barrette in my hair. It was a player safety issue. And I don’t know, I got coach Papa stirred up about it. She got on the umpire about it. For whatever reason, that unrattled me that day.”

While it may have gotten to Smith, the Tar Heels won every game against the Spartans in her four-year playing career.

When Smith’s collegiate days were over, she took a marketing job in the athletics department at the University of Houston and took a volunteer head coaching job with a local private high school from 1996-98. “And then the bug kind of caught me,” Smith said.

On Feb. 23, 2002 Smith’s then-fiance organized a marriage proposal before game one of a double-header against South Carolina. The Tar Heels lined up along the first base side with a sign saying, “Will you marry me?” and Smith was shown a ring inside a ball.

“The proposal was an A+, the marriage not so much,” Smith said with a laugh.

In the first game, the Gamecocks jumped out to a 5-0 lead in the first inning.

“She felt uncomfortable and worried that we got distracted,” Papa said. The Tar Heels would go on to win the game 9-8 in 10 innings, scoring two in the bottom of the 10th and the second game 8-1.

Smith worked primarily with pitchers and catchers, most notably Danielle Spaulding. Spaulding became a three-time All-American and two-time ACC Player of the Year. Spaulding however needed some clever coaching from Smith to reach that peak. She did not want to throw any fastballs when she first arrived at UNC. So, Smith decided to call them something different. She just called them “drop balls.”

“It would spin in there. Four-seam spin just like a fastball,” Smith said. “…Things you have to do as a coach. Whatever works right?”

In 2010, Papa, Smith and Spaulding led the Tar Heels to a regional in Seattle, where the Tar Heels would be on TV, something they weren’t accustomed to. As a result, they practiced doing in-game interviews.

“Bev said, ‘Coach P, you need to practice being interviewed.’ And we were in the hotel room, and there were two coffee cups,” Papa said. “She had me get the coffee cups and put them on my ears like it would be with the headset.” Smith then asked questions for each different scenario, winning, losing and tied.

After that season, Smith left UNC and traveled south to take the job with South Carolina.

Smith’s biggest takeaway from her time with Papa had nothing to do with tactics, but with lessons that can be applied away from the softball diamond.

“I think when you are coaching different people, different things pop up all the time. I think that is something I really learned from coach Papa, is choosing your moments. Empathy. I think that has gone a long way for me in my coaching career,” Smith said. “It’s really where you set standards and expectations. I think coach Papa really helped me understand how you manage those things. Otherwise, you might just blow up all the time.” 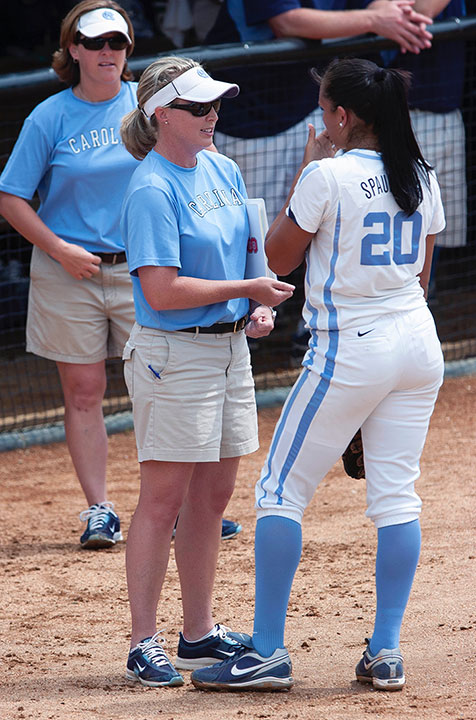 Smith was a coach at the University of North Carolina for 12 years working mostly with pitchers and catchers. Photo courtesy: UNC Athletics.