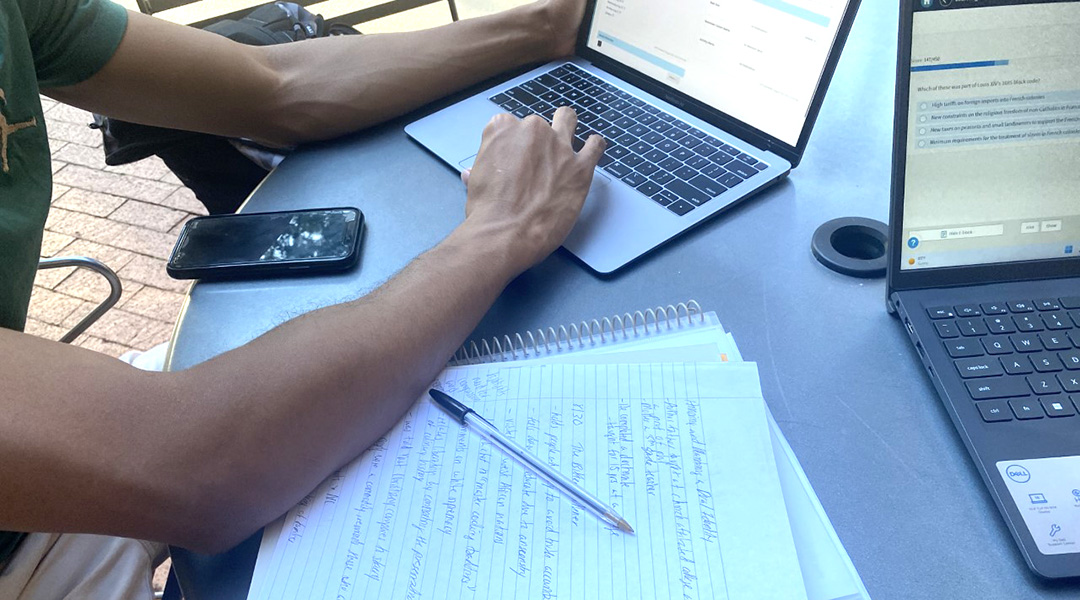 A student studies on campus at USC. Photo by: Shakeem Jones

President Biden’s announcement of student loan debt forgiveness is a sigh of relief for some in Columbia, but the relief is only temporary for Black students.

Biden announced his plan to forgive a portion of federal student loans in a press release last month. The plan would absolve $20,000 for those who received loans and Pell Grants and up to $10,000 for those with only loans.

However, for Black students, this relief barely scratches the surface of their total student debt.

For Abigail Goutier, a sophomore at the University of South Carolina, Biden’s decision is only a small step toward paying for her education.

The current amount of loan debt forgiveness would leave Goutier with $1,000 left to pay for this year.

She says her debt will only continue to grow. “And since I want to become a doctor, that can lead me to half a million dollars in debt based on medical school alone,” Goutier said.

A separate issue that Congress has not yet addressed is that interest paid on large sums of money swells debt beyond what students actually borrow. Over 48% of Black graduates owe more than they borrowed, according to the Education Data Initiative,  a small group of researchers who study education data from federal sources and other public data organizations.

While more than half of all student loans go to white students, Black borrowers are behind on payments at double the rate of white students, according to the National Education Data Initiative.

Goutier has noticed the disparity.

“People in the first week did not stress about money as much as I did,” Goutier said. “I was already contemplating whether or not I should even do my homework because I don’t even know if I’ll be able to pay for the class.”

Briashmel Bell, a senior political science major at USC, said that while the student loan forgiveness is helpful, it is not necessarily enough.

Shay Malone, who has a doctorate in education from the University of Alabama, serves as the director of Multicultural Student Affairs at USC. Malone has more than $100,000 worth of student loans. The majority came from her undergraduate studies.

“I didn’t know,” Malone said. “There are a lot of us who are first-generation college students or from middle-class, low-income housing and our parents didn’t know FAFSA, they didn’t know the tricks and trades of all this. We were told to just go to school.”

More than 66% of Black borrowers report that they regret taking out loans for their education, according to the Education Data Initiative.

Goutier relies on student loans to fund her education almost entirely, having taken out $10,000 herself while her parents took out another $10,000.

“I recently lost my scholarships,” she said. “While I’m trying to get them back, [my parents] are helping me pay for my textbooks, my housing, just basically keeping myself on my feet.”

Less than 10 minutes from the heart of USC is Benedict College, a historically black college.

Pickett answered, “absolutely” when asked if students would still have remaining debt after forgiveness is granted.

Pickett said Benedict is working to educate its students about loans and encourages them not to take out more than they need.

Malone thinks the burden of having student loans is an ongoing one that becomes a part of life after college.

“All we know is debt, and I think the debt just racks up,” Malone said. 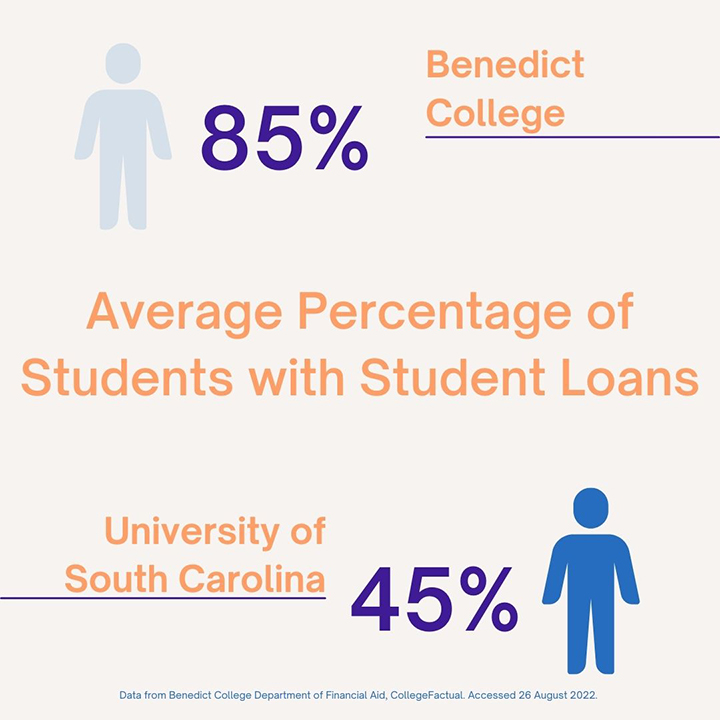 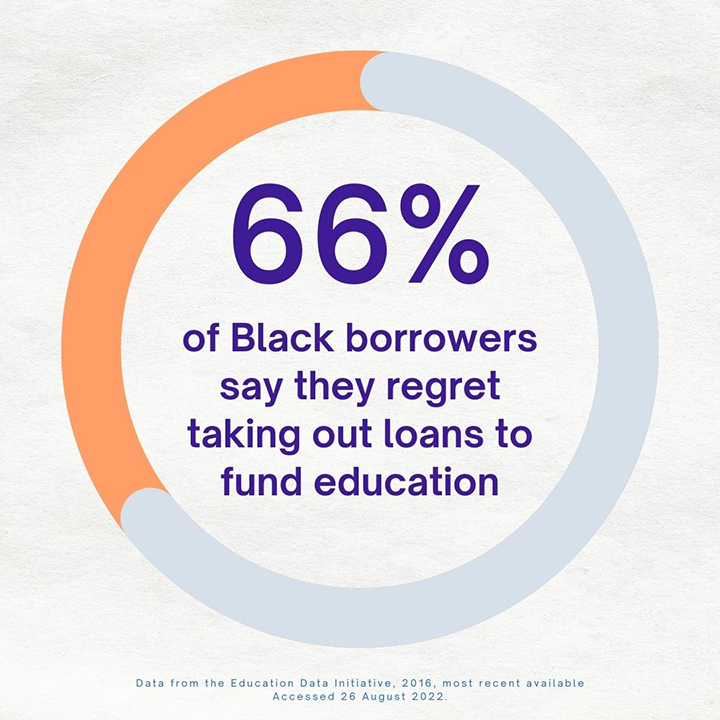 Percentage of Black borrowers say they regret taking out student loans to fund their education. Graphic by: Bee Brawley 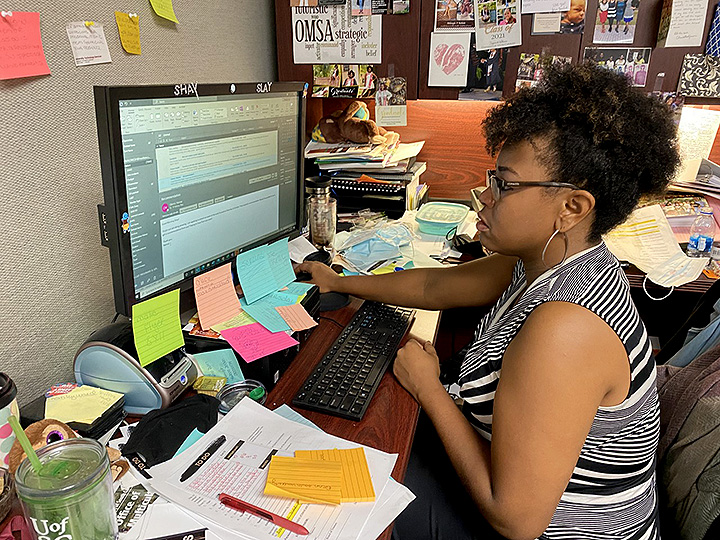 Shay Malone, Director of Multicultural Student Affairs at USC, works inside of her office. Photo by: Shakeem Jones 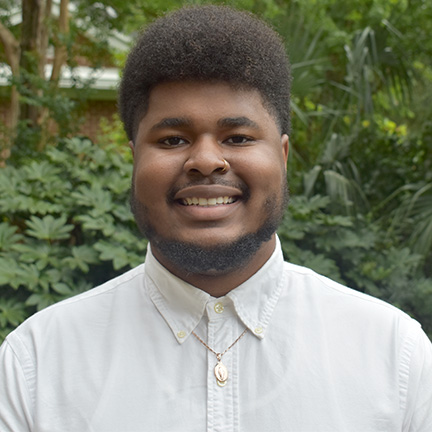 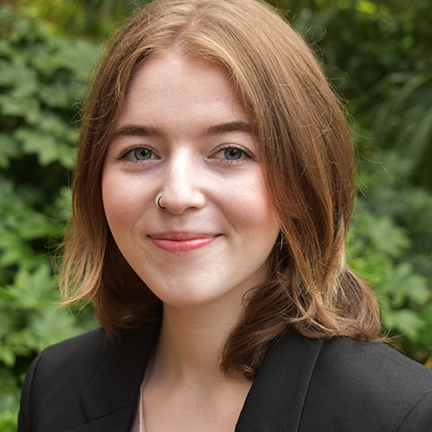