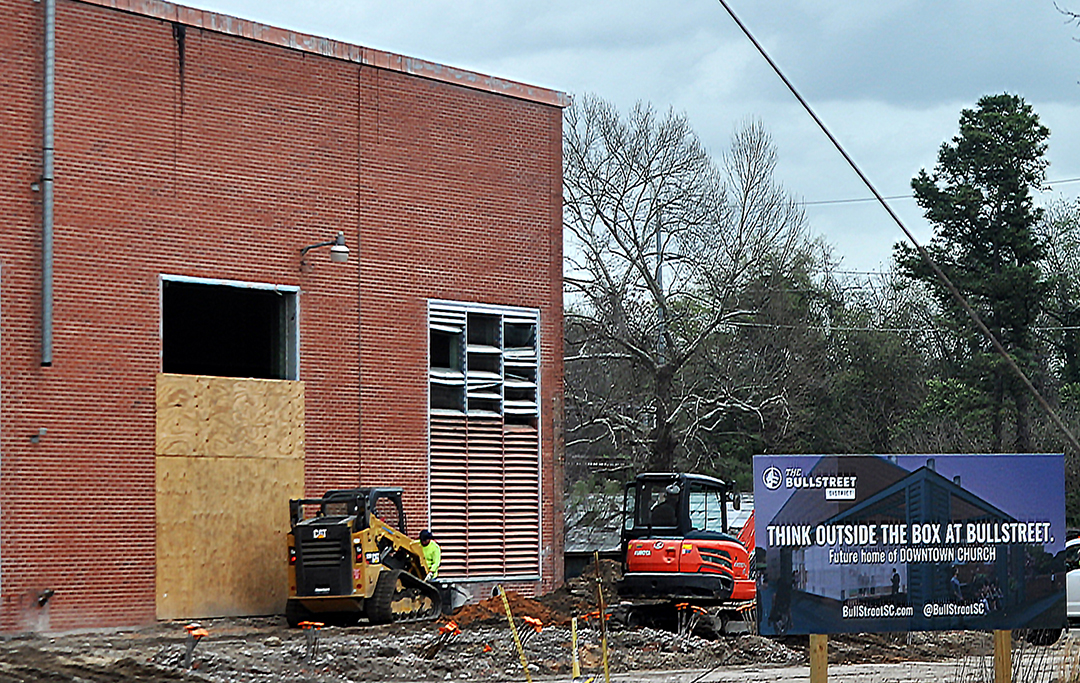 Construction is underway to renovate an old plant on Gregg Street into the new Downtown Church of BullStreet.

These old picnic areas are scheduled to be torn down and transformed into a new park and retirement home for BullStreet’s future residents. 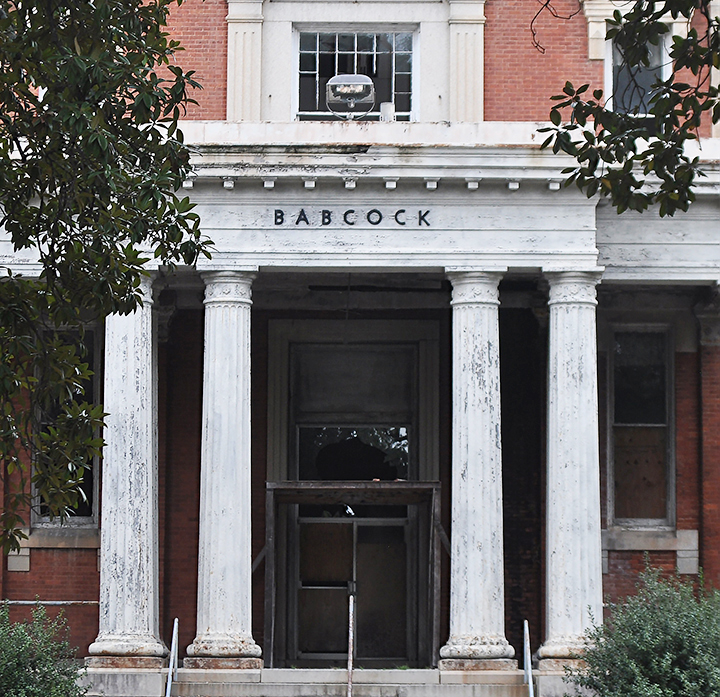 Whether or not certain tax breaks are extended beyond next year for abandoned buildings will determine if the Babcock Building can be renovated. 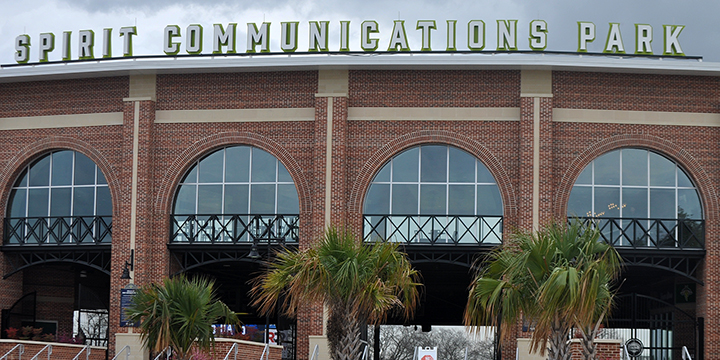 Columbia Fireflies’ baseball park has proven to be a catalyst in drawing attention to the BullStreet area. 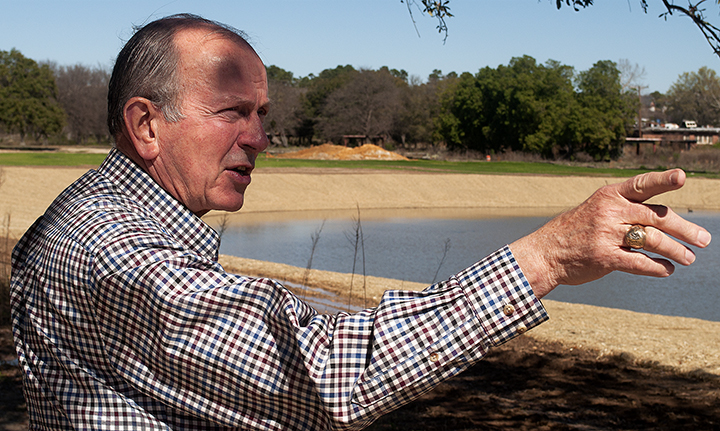 Councilman Howard Duvall has been an advocate for BullStreet’s success ever since he joined the city council.

When you wander the future site of the BullStreet District in downtown Columbia, you may doubt that the property is “the essence of the New Urban South.”

The barren, flat 185-acre site has only a man-made lake and a few trees. On the hill overlooking the development, you can see several rustic buildings that used to stir with the lives of mental patients and the physicians who treated them. But in the distance behind a few signs and trees, a state-of-the-art or modern baseball stadium stands and you start to wonder what else can go there.

In order for the development to succeed, Columbia needs incoming residents to want to move in to the area. Whether amenities or people should come first to a community is the “If you build it, will they come?” scenario. But for Columbia’s BullStreet District, a planned mix of retail, residential and business on 185 acres, it may not be that simple.

Mark Rosenbaum, department chair of the USC Department of Retailing, says people and businesses usually need to grow simultaneously in a new community. But according to Rosenbaum, the BullStreet project may need to be different in order to be viable.

“I think people in Columbia want to see the change in BullStreet first, which means I actually think that in this case the business may have to take the first step,” he said.

The BullStreet District is being built in the historic section of Columbia near the intersection of Bull and Calhoun streets, once the site of the sprawling South Carolina State Hospital.  The developer, Hughes Development Corp. of Greenville, plans on adding apartments, shops, a park, a church and a retirement facility to the Columbia area. In 2013, the city of Columbia agreed to invest $100 million into the 20-year project; $30 million of that money went into Spirit Communications Park, the Columbia Fireflies’ two-year-old minor league baseball stadium. The USC School of Medicine is also planning on building new facilities at BullStreet.

“This is the largest project I think probably in the state of South Carolina that one developer has 185 acres in the middle of a metropolitan city,” said Howard Duvall, a Columbia city council member and chairman of the BullStreet development project.

The project has had a few hiccups. The Commons, BullStreet’s planned retail area, was originally going to begin construction in 2015, but by mid-2017, no progress had been made. Duvall said building 400,000 square feet of retail space at the same time online shopping started to take off didn’t help. Duvall now says the city is trying to build the retail market “80,000 square-foot patches at one time.”

Rosenbaum says there is still room for growth within the service industry. People are in need of retail stores like supermarkets, upscale restaurants and health stores to provide extra services that aren’t serviceable online.

To go along with retail, hundreds of tech jobs will be coming to the area as well. Companies and start-ups like Spirit Communications, TCube, Capgemini and SOCO have set up operations in the buildings already built or renovated like the First Base Building located right next to the baseball stadium.

Another key to BullStreet’s future success is not just in the job market, but also in the residential homes that are being built. Rosenbaum says there’s a trend of baby boomers moving back into the city, along with a younger generation attracted to urban lifestyles. Rosenbaum believes that in order for BullStreet to thrive, the residential housing needs to be prepared for a form of economic diversity among residents.

“It can’t be all high-end, it can’t all be loaded, it has to have mixed uses. If you want to build a community, a true community, it has to be welcoming to more than one target market,” Rosenbaum said.

How a project this big is funded is a major issue with Columbia residents. City money totaling $100 million has already been committed, and with it being year four of the 20-year plan, tangible results are expected. Benjamin said over the 20-year plan, BullStreet can generate $1.2 billion in capital investment and at 6 percent interest, that means “significant revenue for the city of Columbia, more than doubling our general fund revenue now for the entire city of Columbia.”

Rosenbaum says consistent communication between officials and residents on how the money is being spent is key to building trust among everyone in the community.

BullStreet already has a state tax break with the Bailey Bill, which allows “local governments to offer a special property tax assessment for rehabilitated historic buildings.” Another abandoned building tax break must be extended beyond next year for plans to move forward. The city plans on turning the Babcock building, an old mental health facility, into apartments.

“We are cautiously optimistic,” Benjamin said. “The ability to take advantage of both historic tax credits and abandoned building tax credits has been an amazing opportunity for all of South Carolina.”

Recently, Richland County Council candidate Will Brennan said there hasn’t been enough cooperation among the county and city councils on the BullStreet project. City councilman Duvall said that he would also like more teamwork among state entities and that they have discussed having a tax income and finance district in the past, the same kind of financial plan that previously helped fund the Vista. But a similar deal for BullStreet is no longer on the table.

“It has been discussed informally between the groups for a couple of years now, but we don’t have any buy-in with the county or the school district on the project,” Duvall said.

Even with the up and down progression of the BullStreet project, plans for development are still running smoothly. Five of the 28 townhouses being built have already been sold, and a new $30 million active senior complex is on track to break ground in April.

“We always expected, over the course of 20 years, that the project would change significantly and people should continue to expect things to change,” Benjamin said.

The size of a project like BullStreet has so many variables going on within it, that it shouldn’t surprise Columbia residents that they may not see the kind of results they were expecting. However, that doesn’t mean they won’t eventually see a light at the end of the tunnel.