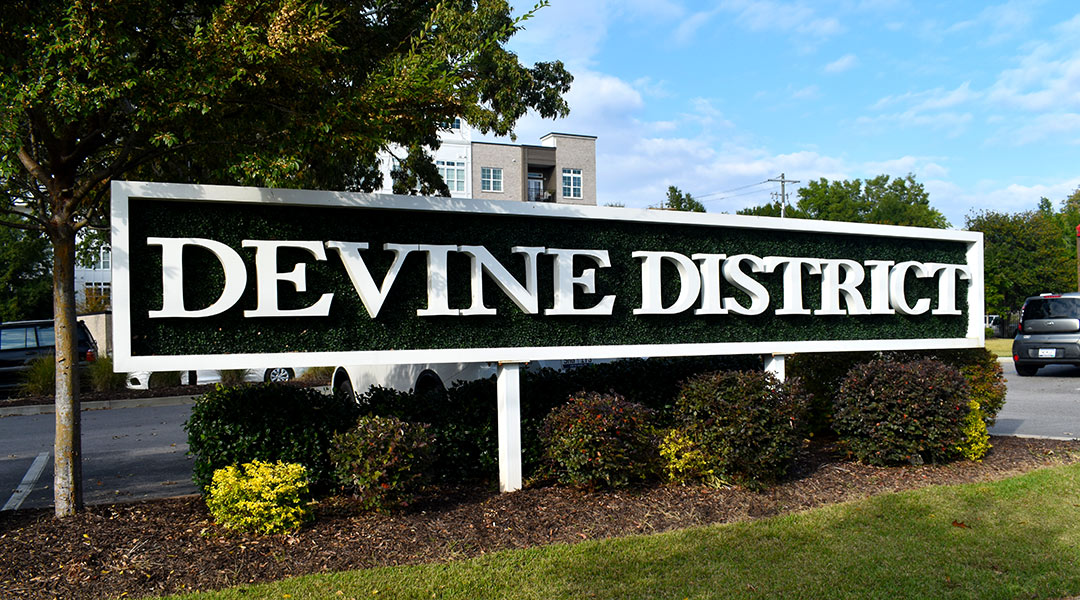 More than 95% of businesses on Devine Street are locally owned and operated, according to Columbia Economic Development. (Photo by Jack Veltri)

Devine Street businesses and workers are frustrated with the city of Columbia because street infrastructure renovation plans dating back nearly two decades have yet to be fully implemented.

In 2004, the upscale shopping and residential district commissioned a design plan to revamp the Devine Street corridor’s streetscaping to make it safer for pedestrians and vehicular traffic. The plan is broken down into three phases: crosswalk additions, streetlighting and streetscape construction. The project was projected to cost $9.8 million when proposed for the boutique-driven area in 2004.

Jennifer Suber, the marketing coordinator for the area’s merchants group, the Devine Street Association, pleaded for the city to do something. She said it has listened but hasn’t done enough to make a difference.

The intersection at Meadow Street, near Five Points, recently got a traffic light, the first new one in the area in years. But streetscaping is still a major concern. Devine Street is wide, but the lanes are narrow. Street parking makes the roadway even tighter. Suber said side mirrors on parked vehicles are often hit by passing motorists. Street markings have long faded, as well.

City officials agree that something more needs to be done.

“One of the biggest things that we hear from the businesses over there is that they want to see a little more traffic calming going on through there,” said Ryan Coleman, the city’s economic development director. “I think slowing down a little bit of that speed of the traffic on the corridor will be helpful in the long run, as well.”

A draft version of the design from mid-2003 recommended eliminating on-street parking along the north side of Devine Street from Holly Street, near Henry’s Restaurant & Bar, and Millwood Avenue, at Dreher High School. It also suggested re-striping the road to widen the vehicle lanes. But the public response was split. Some residents thought the change would encourage speeding and push parking onto residential side streets. That part of the design plan ultimately didn’t make it into the final plan.

Kellan Monroe, president of the Devine Street Association, said being a high vehicle- and foot-traffic area can be difficult to balance.

“It’s a double-edged sword,” Monroe said. “It’s both good and bad, considering you get all the foot traffic and all the things you want as a business, but you also have the issue of being a major thoroughfare for the city.”

Suber believes the city hasn’t focused on improving Devine Street because it hasn’t encountered the same crime and homelessness issues found in the other districts.

“Because we are literally not on fire, they are not thinking that it’s a big deal,” Suber said. “If you look at who gets money, who gets investments, who gets paid attention to is the people who have the problems that the city’s like, ‘Shoot, we got to fix that.’”

In a way, some city officials agree with Suber. The corridor is “very healthy” with a lot of longevity for those businesses, Coleman said.

“You rarely see a vacancy come on the market,” Coleman said.  “There’s not a lot of free acreage to do stuff on, so people are going to have to get creative with how they do their development there.”

One potential development is a new hotel. The city bought a six-story former state office building at 2221 Devine St., a block out of Five Points, for $3.8 million in June 2019.

Those plans were halted by COVID-19 and have not picked up steam since, Monroe said.

Devine Street was once home to the Whitney Hotel. But that was converted into what is now 700 Woodrow, a luxury apartment complex, in September 2013. There are no hotels in the district now.

“It would be a bad idea to turn down things that diversify your income and diversify what’s available to the businesses on the street itself,” Monroe said.

Suber hopes the district can get help sooner rather than later.

“Our growth is only leading to more problems, and something is going to happen,” Suber said. “It’s only a matter of time before things get really bad. That infrastructure cannot support the number of cars and pedestrians that we have on there right now. It’s just not safe.”

For some shop owners, however, infrastructure improvements bring problems of their own.

“They were updating the sidewalks, so people couldn’t access the stores,” Goff said. “And I don’t know whether it was the city’s responsibility or (the) private contractor’s. I have a feeling it was the city, because it took forever. It really affected business negatively during the construction.”

Once construction was complete, though, business went back to normal. If updates are made to Devine Street’s corridor, Goff is worried that it could take a long time and hurt his shop again.

Until changes happen, he’s hoping the neighboring businesses will continue to prosper.

“I think there’s a lot of improvement that can be done, you know, maybe do a green space area, a place to walk the dogs,” Goff said. “I know we have two coffee shops and that’s always a good thing. And we have a brewery and a lot of retail. So that helps. But I don’t know, maybe bring in an ice cream shop or something that generates a lot of traffic.”

No ice cream shop is slated yet, but other businesses have announced they will make their way onto Devine Street.  A new retail space dubbed The Green will feature two shops — Sully’s Steamers, a popular sandwich shop from the Upstate, and Ally & Eloise, an award-winning bakery with two other Columbia locations.

“Devine Street is Columbia’s premiere boutique commercial district, as it is nestled between three of Columbia’s oldest residential neighborhoods and hosts a unique blend of shopping, dining, office, and living opportunities,” Matt Mundy, the developer of the retail project, said in an Oct. 4 press release. “It’s an honor to be able to call this community home while also bringing more locally owned businesses to continue its legacy.” 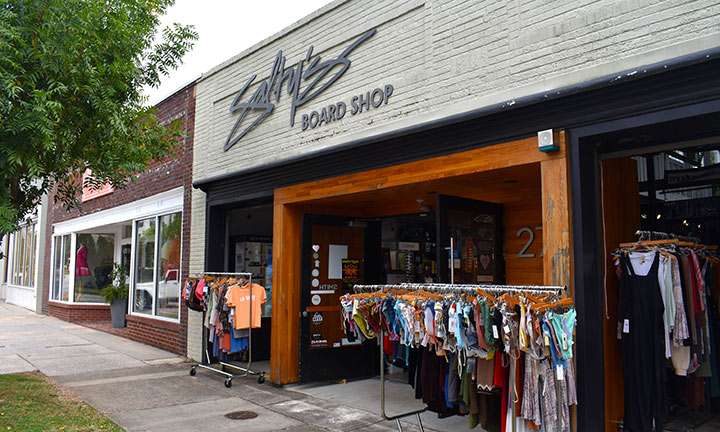 Salty’s Board Shop, located at 2712 Devine Street, is one of many locally owned businesses in the district. (Photo by Jack Veltri) 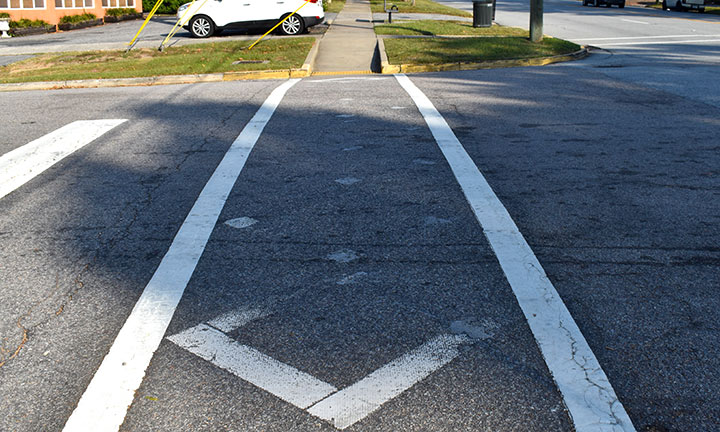 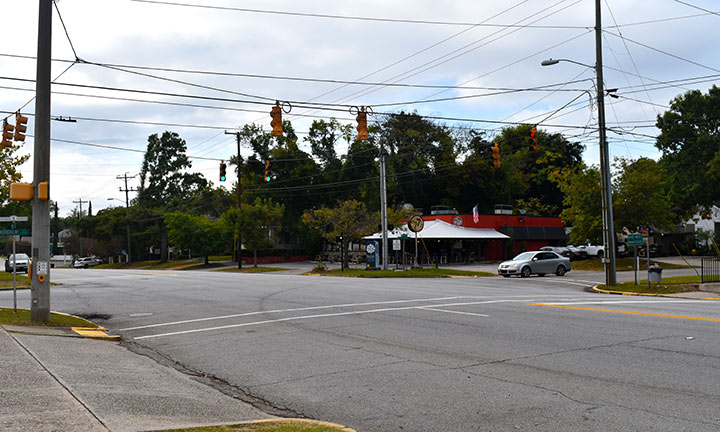 One of Devine Street’s main problems is speeding, which has resulted in parked cars’ mirrors being knocked off. (Photo by Jack Veltri) 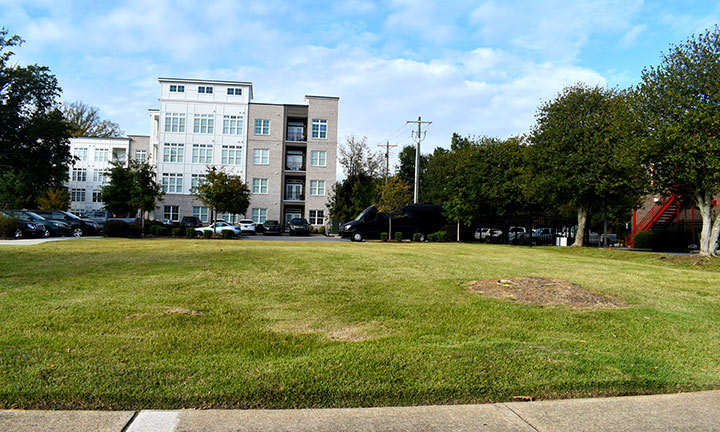 This land may look like an ordinary green space, but it will be the future spot of two new shops: Sully’s Steamers and Ally & Eloise. (Photo by Jack Veltri) 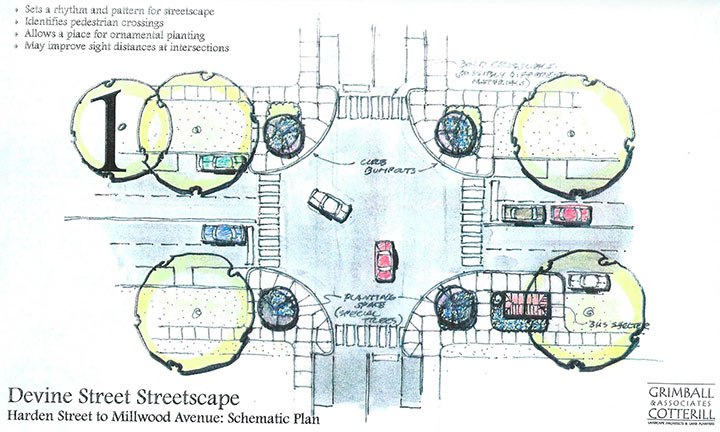 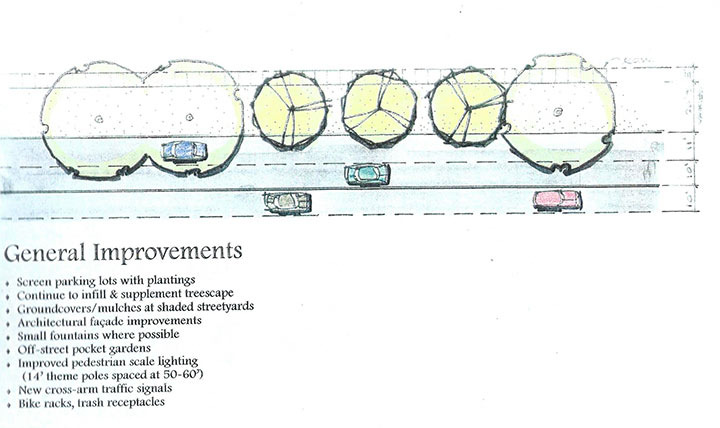