Flooding anticipated in Columbia ahead of Hurricane Ian: ‘Turn around, don’t drown’ 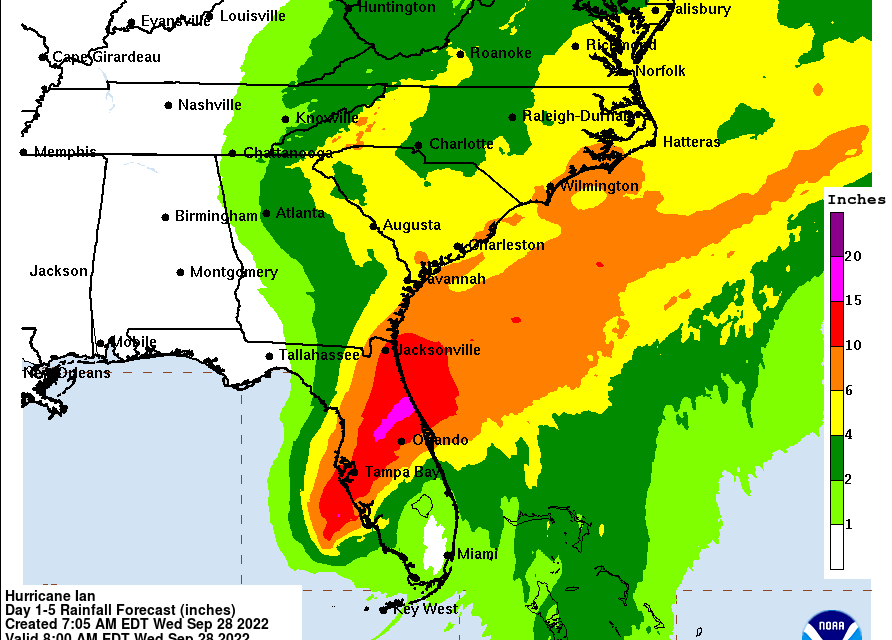 Low-lying streets in Columbia could flood as the nation’s first tropical storm of the season is expected to roll in over South Carolina at the end of this week.

Hurricane Ian is expected to bring strong winds to the Capital City on Thursday and Friday and heavy rain on Friday and Saturday, according to the National Weather Service.

The hurricane’s projected path as of Tuesday afternoon will bring Columbia anywhere between 2 to 6 inches of rain, according to the National Hurricane Center.

Officials say to avoid the nearly 30 roads that are prone to flooding in Columbia. Intersections on Blossom, Harden and Wheat streets are low-lying and flood quicker than the rest of the city.

Five Points, which is surrounded by hills and built on swamp land, flooded most recently July 4 when more than 4 inches of rain fell in less than an hour.

“Whenever we have that prolonged period of heavy rain over a short period of time, we have flooding – and it happens fast,” said Mike DeSumma, spokesperson for the Columbia-Richland Fire Department.

The fire department is encouraging people to stay home Friday and Saturday but to not cross roads with standing water if they do choose to travel.

City firefighters will work with the Columbia Police Department to monitor the flood-prone areas.

Officers will be posted to assist with traffic and put barricades where they’re needed, City of Columbia spokeswoman Jennifer Timmons said in an email to the Carolina News and Reporter.

For now, police and fire officials are constantly watching the weather, “just like everyone else,” DeSumma said.

But officials want people to know that they’ll work no matter what the conditions turn out to be.

Strong winds bringing down trees, and power lines are another potential concern. Residents should buy food and water and have flashlights and first aid kits on hand in case of a power outage, DeSumma said.