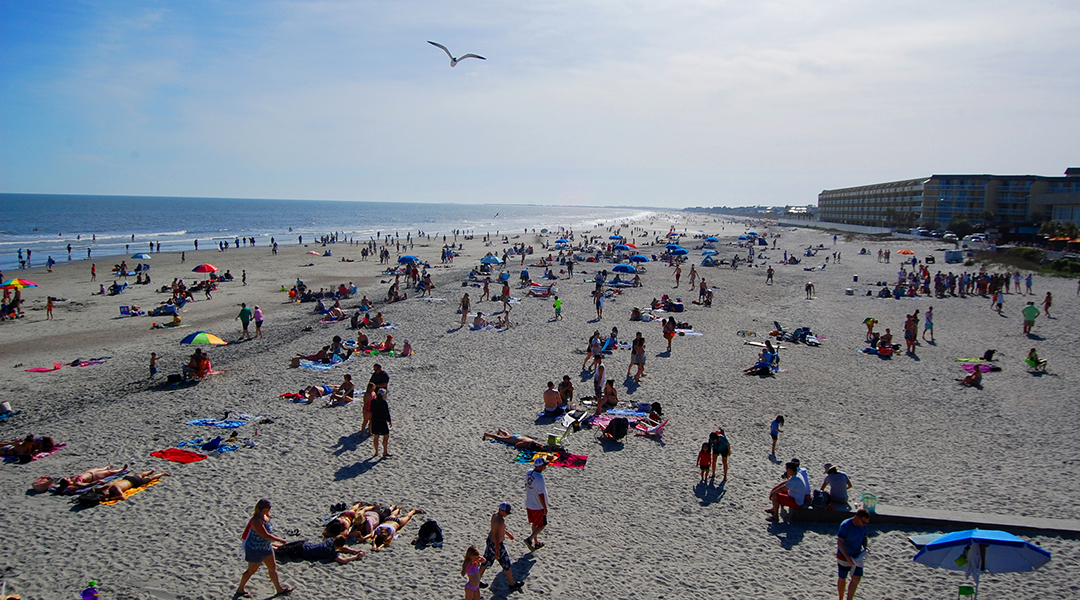 Folly Beach is highly residential as well as a major tourist destination, making it an economic powerhouse for Charleston and the Lowcountry. 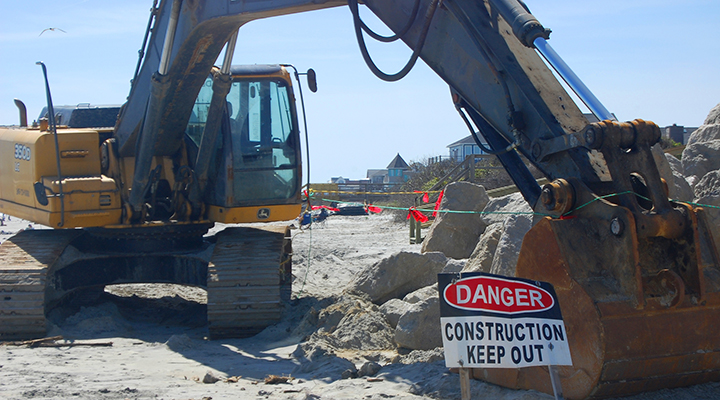 Construction equipment occupies parts of the beach where terminal groin structures are being arranged to combat erosion. 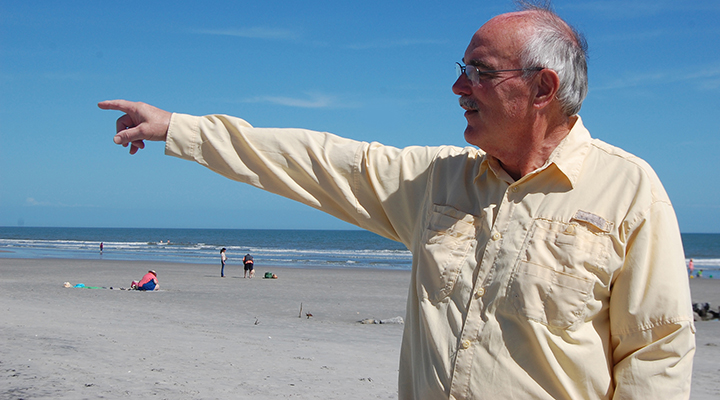 Joe Schmidt, a Folly Beach resident, is one of many locals concerned about the future of his island home. 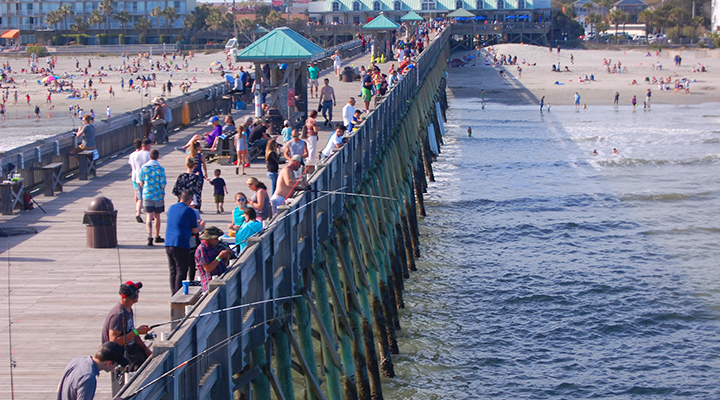 Folly Beach’s iconic pier stretches out into the Atlantic Ocean. This site is a popular fishing spot. 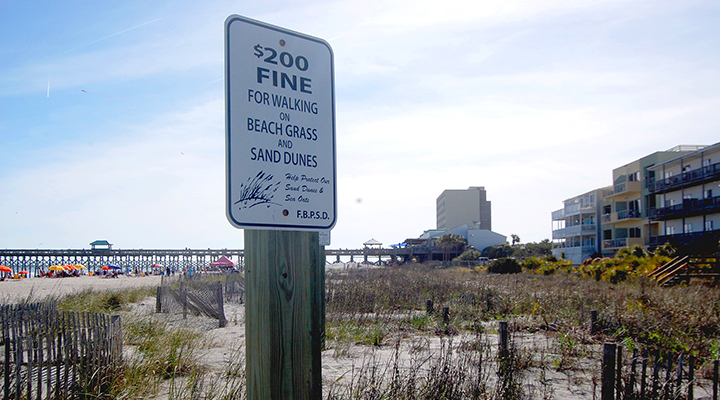 The beach grass that grows on sand dunes provides wildlife habitat and is crucial to slowing beach migration. As a result, sand dunes are heavily protected by federal law. 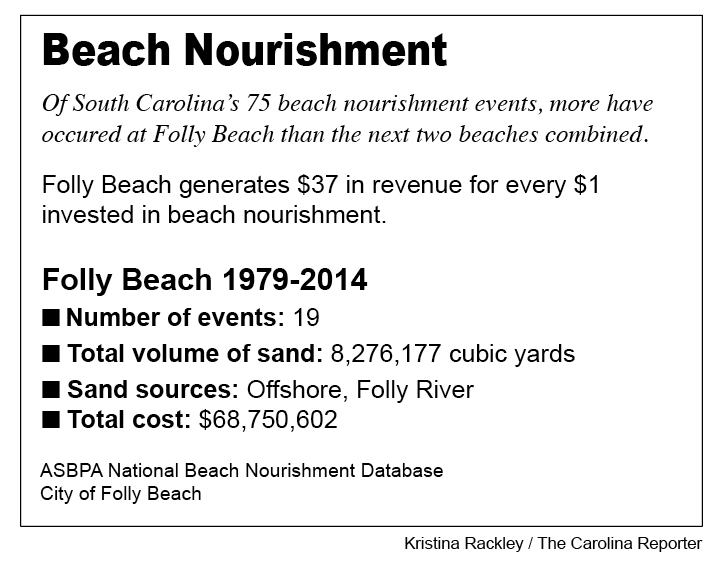 Second in a three-part series

For South Carolina, Charleston’s Folly Beach  is ground zero in the battle over coastal erosion.

“We never considered buying a house on the front beach because I figure, sooner or later, I will be front beach,” said Folly resident Joe Schmidt.

The erosion has become so severe that parts of Folly have vanished permanently beneath the waves.

“That far end of the island, there are actually houses that are out there in the water,” Schmidt said.  “There’s one or two streets that are out in the ocean from many, many years ago that people are still paying taxes on.  They still hope that somehow, it’s going to come back.  They own the land on the street that’s in the ocean.”

According to a study done in the 1980’s, over 58 percent of the erosion experienced by Folly Beach is caused by the jetties, Folly town administrator Spencer Wetmore said.

To combat the erosion that threatens to sweep away the island community, Folly has implemented many projects and regulations.  Terminal groins – long structures of rocks and concrete – line the beach, holding sand in place that would normally be swept down the coast.  Residents are required to raise their lots to specific levels to fall in line with the most important part of combating the erosion process – beach re-nourishment projects.

Folly has a contract with the U.S. Army Corps of Engineers that secures federal funding for beach re-nourishment.  These projects involve transporting sediment from the Folly River through a pipeline down to the beach, where barges will help move it up and down the eroded areas.  The amount of sediment needed for these projects is massive – roughly equivalent to 60,000 dump truck’s worth for the upcoming re-nourishment project in late April.

Dredging sand from environmentally sensitive areas like coastal ecosystems can be a tricky process.

“We do an extensive amount of geo-testing and sediment tests to make sure it’s beach-compatible sand, and that we get the depth correct,” Wetmore said of the dredging process.  “We want to treat it like the environmentally sensitive area that it is.”

Although the process is extremely expensive, in the eyes of many, the fight for Folly Beach is well worth it.  Folly is a highly residential area, and the loss of the beach would displace thousands of people like Schmidt, who has lived there for 12 years.  But sand re-nourishment isn’t just a fight for people’s homes; it is a fight for a highly productive economy.

The loss of Folly would therefore be more than just a devastating blow for coastal residents; it would be the loss of a serious economic asset that would harm the entire state.

While beach re-nourishment is crucial to preventing Folly Beach – and the community, wildlife habitat, and economy that comes with it – from vanishing entirely, coastal erosion is a global problem that cannot be stopped entirely.  Rising sea levels will eventually eat away at what is left of Folly Beach, and the looming threat of the next inevitable hurricane or tropical storm accelerating the process hangs heavily over many coastal communities.

The arrival of tropical storms Matthew and Irma greatly worsened the erosional damage to many S.C. beaches.  Both storms stole thousands of yards of cubic sand from Folly.  The sand dunes in front of Schmidt’s house used to be one of the highest and largest on the beach.  Irma obliterated the dunes, leaving behind only small mounds of sand.

“I was shocked after Irma,” Wetmore said.  “The storm surge was just incredible. Old, established dunes that had been there since the 90’s were gone.”

While the fact that the erosion cannot be stopped entirely weighs heavily on the minds of many residents, some, like Schmidt, have additional concerns about what happens when the contract with the Army Corps expires.

“I think it’s just going to get to the point where they’re going to say ‘we’re not paying for this any more.’ It always boils down to money,” said Schmidt.

Wetmore said that renewing the contract after the 50-year term plays out is a viable possibility, and that steps will always be taken to secure funding to protect the beach.

“We live with erosion every day, and we just do the best we can,” Wetmore said.  “In the end, we’re no match for Mother Nature.  There’s no perfect solution.  But we’ll continue to do the best we can to preserve our community and fight for it.”