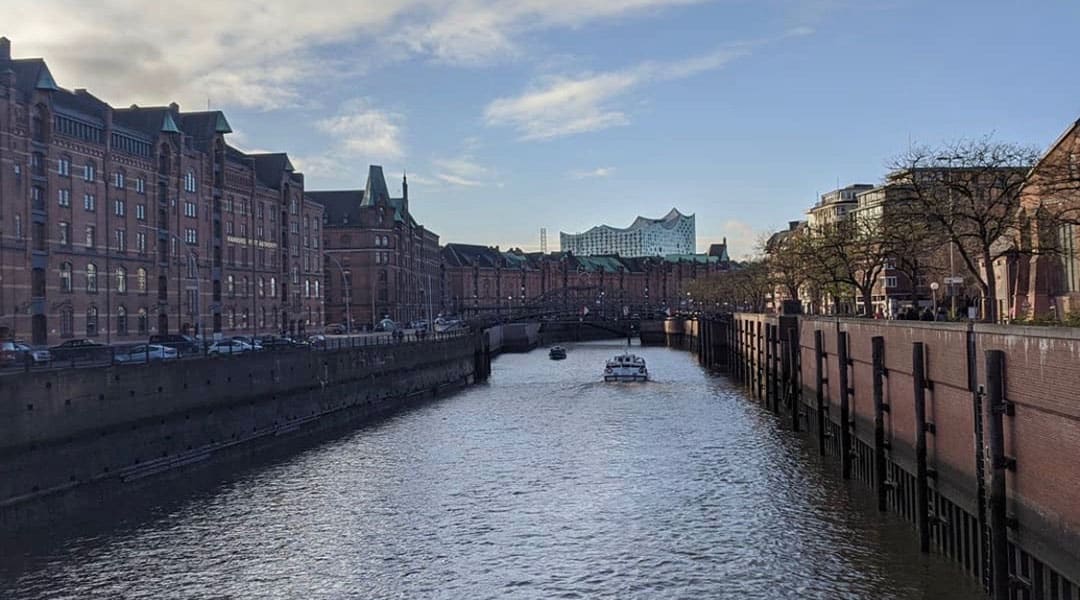 Alexis Bantle, a 2019 USC graduate and Fulbright scholar, had four months left in her Germany program when official emails from the Fulbright Commission began to roll in.

“It all kind of started around March 16 or 17,” Bantle said. “The COVID stuff was starting to pick up, and they were getting cases in Germany. First, they were just letting us know they were aware of the situation. They weren’t giving us any direction. I think they were trying to keep the peace, but we were hearing stories.”

After graduation, Bantle made the move to Bramerhaven, Germany, to embark on her research supported by a Fulbright award at the Alfred Wegener Research Institute, a marine and polar research center.

Bantle, having already lived in Germany for a short time during her undergraduate studies through DAAD RISE, a research internship program, enjoyed her return to the country and had just moved into her new apartment two months prior. Though Fulbright did not make evacuation mandatory, the program stressed to its scholars that they “should” leave.

“It was really sad because the weather was just starting to warm up. I was living in this big park I was going to run in,” Bantle said. “I had so many plans for the spring and the summer, and it was a hard mental situation.”

However, she realized that logistically and financially, flying back home to Southport, North Carolina, was the best decision for her personally.

“I really didn’t want to get stuck. My institute was already thinking about closing. I had planned a trip to Budapest, and there were flights getting canceled, so I made the decision that if I can’t work, I can’t travel…the only thing I’m doing here is spending more money,” Bantle said.

Though Bantle was disappointed to leave, she said that Fulbright made the process as easy for the students as possible, offering to cover all unexpected travel expenses and making leaving their programs the most “attractive” option.

“We would just call the booking agency they [Fulbright] had partnered with, and there would be no cost from us if we decided to make changes or anything. We basically had an unlimited travel budget to get us back,” Bantle said.

Now, Bantle is back at her home and looking forward to beginning her Ph.D. studies in biology at the University of California San Diego.

Corinne Smith, a freshman engineering major at USC, was ecstatic to learn she had been chosen for a Critical Language Scholarship, or CLS, to fund a summer studying Hindi in Jaipur, India. However, on March 11, after the CDC issued a global level 3 travel advisory, the U.S. government suspended all summer CLS programs.

“I was incredibly disappointed because it would have been the first time I had ever left the country, or even been on a plane,” Smith said.

The CLS is a summer opportunity presented to U.S. college students to fund learning of a critical language, now offering programs in 15 languages including Arabic, Hindi, Portuguese and Swahili.

After being notified of her acceptance to CLS, Corinne planned on pursuing the program; however, she is now facing the same issues as many other undergraduate students looking for jobs or internships due to the pandemic.

“This summer I have been looking for other opportunities, but it has been difficult as so many places have stopped hiring. Plus, as a freshman, I don’t have many internship opportunities,” Smith said.

Anna Sheppard, a senior at USC graduating in May with a public health degree, also received a CLS to study Urdu at the American Institute of Indian Studies in Lucknow, India. However, due to her status as a senior, it is likely that she will be unable to reapply to the program. Though disappointed, Sheppard understands the decision to cancel CLS programs worldwide.

“If you’re thinking broadly enough to be planning ahead and getting a fellowship with that global mindset, then you can also realize the necessity of social distancing and decreasing travel and actually treating the pandemic with the seriousness it requires,” Sheppard said.

COVID-19 has caused Sheppard to think less about seeing as much of the world as she can and more about being present in her hometown community of Beaufort, South Carolina, and across the state.

“Because of my public health degree and my experiences working in the field, I am now applying to some electronic health record [EHR] companies, which are doing a lot of work with tracking the pandemic. I’m also looking into some consulting and research companies,” Sheppard said.

“I’m just trying to be adaptable right now, and being adaptable right now is just trying to take is stride that senior year is not looking like I thought it would, and after senior year is definitely not looking like I thought it would,” Sheppard said. “I’m thinking about how I can make the best of that instead of treating it like a bad thing.”

Payge Jennings, a national fellowships coordinator in USC’s National Fellowships and Scholar Programs office, primarily works with international fellowships, such as Fulbright and CLS. She said that while a change of plans can be particularly disappointing for fellowship winners, it presents uncharted territory for many more applicants.

“It’s even tricky for the students who don’t win, right? Think about students who are semifinalists for Fulbright, but they didn’t end up getting it,” Jennings said. “Their backup plan was maybe to get a job, but now the job market is so unsure, they can’t do that. It’s a mess for everyone involved.”

Now, Jennings says the office is focusing on connecting with winners in this year’s cycle and previous ones.

“Something we’ve been talking about a lot in our field is post-application or post-fellowship support,” Jennings said. “It’s hard being in this place where I don’t have any control, but I care about the students, and we’re here to help them.” 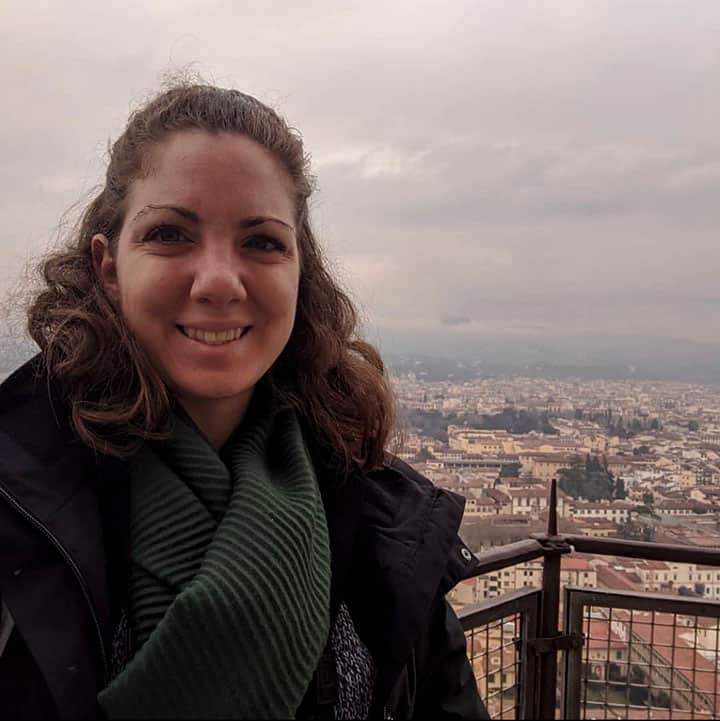 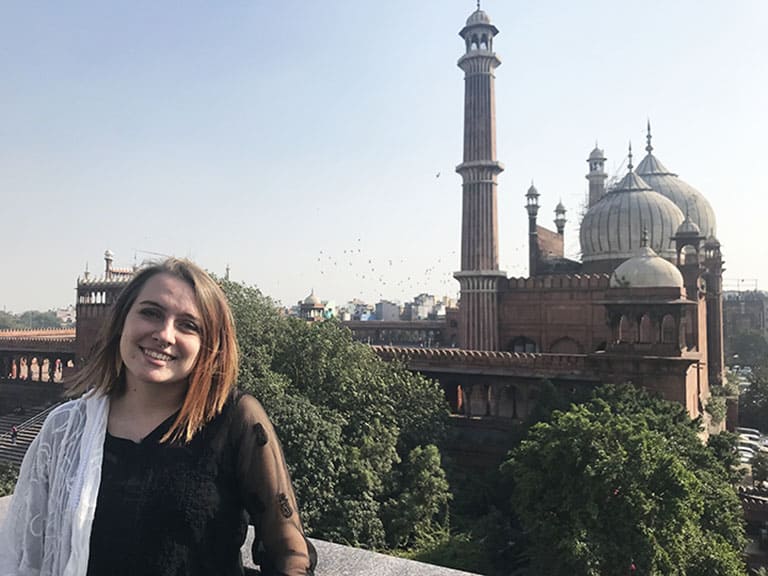 Anna Sheppard stands in front of the Jama Masjid in Delhi, India, during her 2018 Boren Scholarship experience. Credit: Anna Sheppard 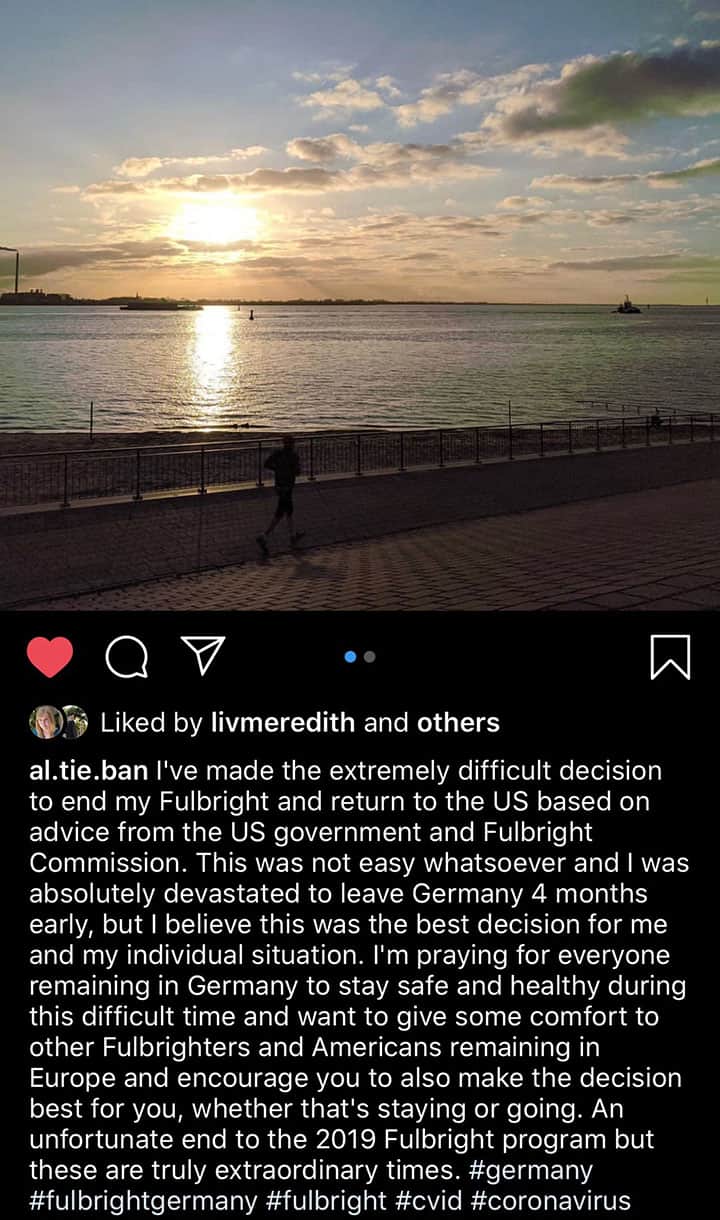 Alexis Bantle announced in an Instagram post that she was making the decision to return to the U.S., cutting her Fulbright experience short. Credit: Alexis Bantle