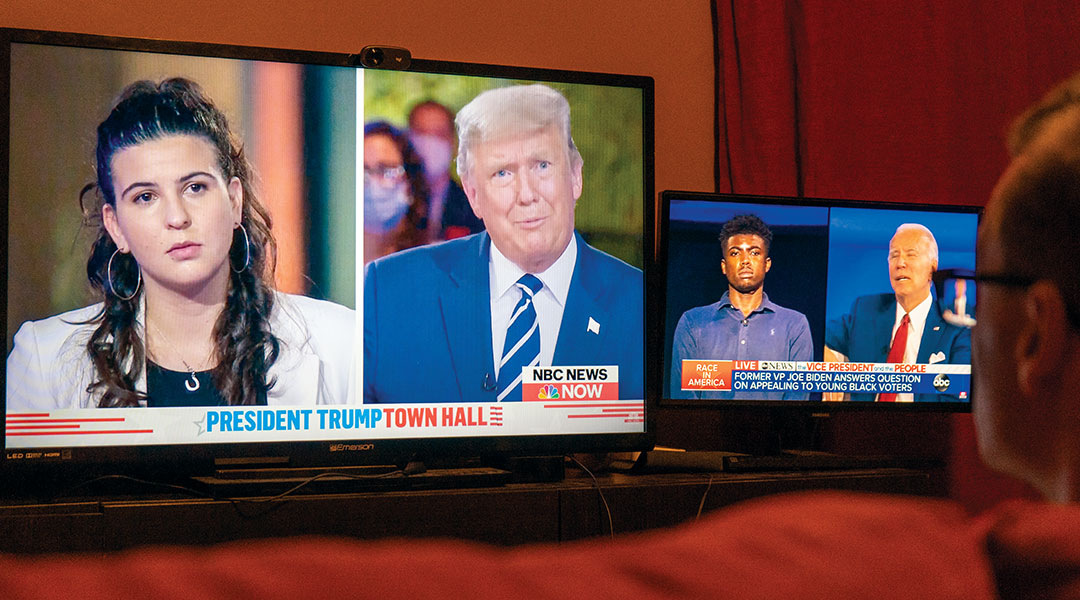 Election fatigue and early voting contributed to lower interest in Thursday night’s presidential town halls. Many voters said that they would not be tuning into President Trump or former Vice President Joe Biden and those that did, said the town halls would not likely change their minds.

“I just can’t imagine Trump saying anything that would make me think he has any vision on where he wants to take this country,” Joanne Lee, of Chapin, said. “I’d rather hear what Biden wants to do for the country than Trump to say ‘Hillary’s emails and deep state’ and whatever else he comes up with.”

Trump and Biden participated in dueling town halls that aired simultaneously. Trump, on NBC, attracted about 110,000 viewers on YouTube at the start of the stream and ended with about 225,000. Biden, on ABC’s YouTube stream, started with about 170,000 and ended around 340,000. Neilson ratings show that Biden’s town hall clocked in at 13.9 million viewers, surpassing President Trump’s town hall at 10.6 million.

After the first presidential debate on Sept. 29, analysts suggest voters may have turned away from watching either town hall.

“I just think that this election is very polarized whereas everyone is very certain as to who they are voting for and who they aren’t,” junior hospitality management student Sydney Pickett said.

“I feel like another aspect of not wanting to watch is that the first major presidential debate was so chaotic. They were talking over each other and was very unprofessional and I think it left a bad taste in everyone’s mouth,” Pickett said. “People felt like they didn’t want to watch anymore because of it being so bad.”

Voters may have already made up their mind and cast their ballot, Pickett said. Record numbers of early and absentee ballots are being cast nationally. The South Carolina Election Commission has reported 419,000 ballots have been returned as of noon, Oct. 16. That number is expected to grow.

Pickett, who is from Evans, Georgia, is planning to go home and vote early within the next week. She is a first-time voter in a presidential election and wants to ensure that her ballot will count.

Of South Carolina voters polled at the State House Thursday before the debate, most said they would be tuning in to Biden’s town hall while occasionally flipping to Trump’s for entertainment. Those that chose to watch Trump were less inclined to listen to Biden.

Savannah Guthrie, the moderator of NBC’s town hall in Miami, used the first quarter of the hour to question Trump on his coronavirus diagnosis. She pressed the president on whether he had gotten tested the day of the first presidential debate and how often he gets tested. President Trump said he possibly got tested the day of the debate but could not recall.

Guthrie also pressured the president on white supremacy and his reluctance to denounce such groups during the first debate — to which Trump said he has denounced it for years. Trump then criticized the moderators for not asking Biden to denounce Antifa, an anti-right-wing and anti-fascism group.

The president was also asked to denounce QAnon, a conspiracy theory that accuses Democrats of being part of a pedophilia ring that worships Satan and heralds Trump as the one to put an end to the group.

“I know nothing about QAnon,” Trump said. “I do know they are very against pedophilia, they fight it very hard.”

Tim Altman, a resident of Columbia, said he thinks people don’t like Trump because he is outspoken and sometimes intemperate but Altman likes that the President is straightforward.

“We need someone like Trump in there in this day and the way this world is,” Altman said. “I think if that other dude Biden wins, I think if he wins we gonna go to war. Some other countries are gonna think we weak and will start bombin’ our ass.”

Trump ended the one-on-one with Guthrie after about 20 minutes and proceeded to take questions from voters with Guthrie chiming in occasionally to press points in his response. Voters asked about a range of topics including how to improve affordable healthcare, COVID-19 protections, immigrant protections and law enforcement relationships to minorities. Trump’s overall responses to these questions were that his administration is or has already taken care of their concerns.

Reactions to Guthrie as the moderator were split. While conservative figures like Rudy Giuliani, were quick to call her “hostile and argumentative,” others praised her for being quick to fact check and asking follow up questions. In comparison, Biden’s interactions with ABC moderator George Stephanopoulos were tame and civil.

Biden utilized the town hall in Philadelphia to speak more clearly on his policies to voters. He spoke in-depth about his tax policy and how he plans to get rid of restrictions with redlined neighborhoods, specifically pleading to young black Americans.

The most notable takeaway from the Biden town hall was his position on the Supreme Court. Biden stated that he was ‘not a fan’ of court-packing, however, he said he would make his position clear by Nov. 3. He emphasized the importance of a lifetime appointment to the bench saying “Presidents come and go. Justices stay and stay and stay.”

The final presidential debate is scheduled for Oct. 22 at Belmont University in Nashville, Tennessee. Kristen Welker of NBC News will be the moderator. 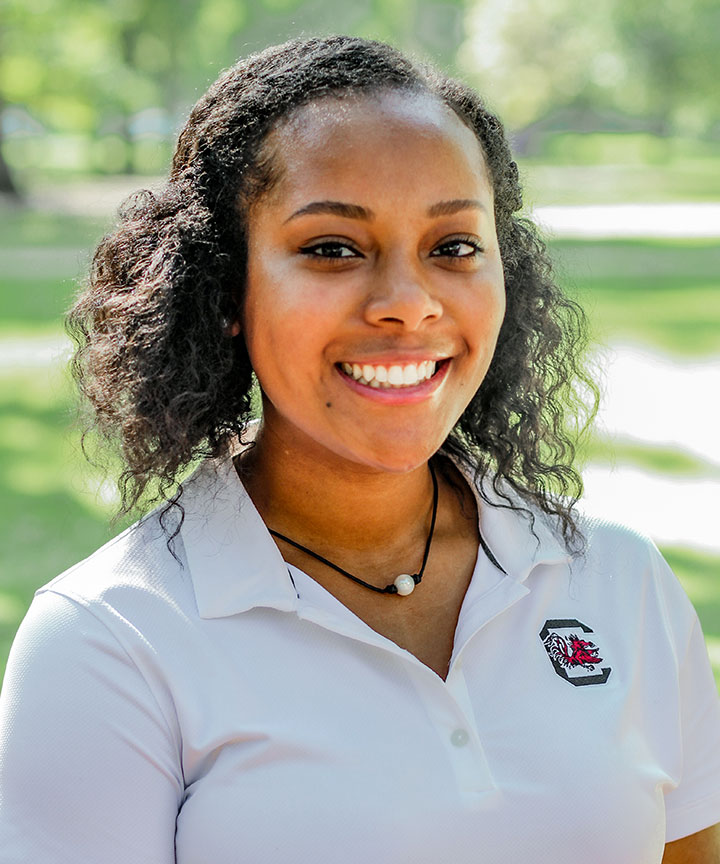 Sydney Pickett, a UofSC junior majoring in hospitality management, is a first-time voter in a presidential election.  She plans to cast her ballot for the Biden-Harris ticket. 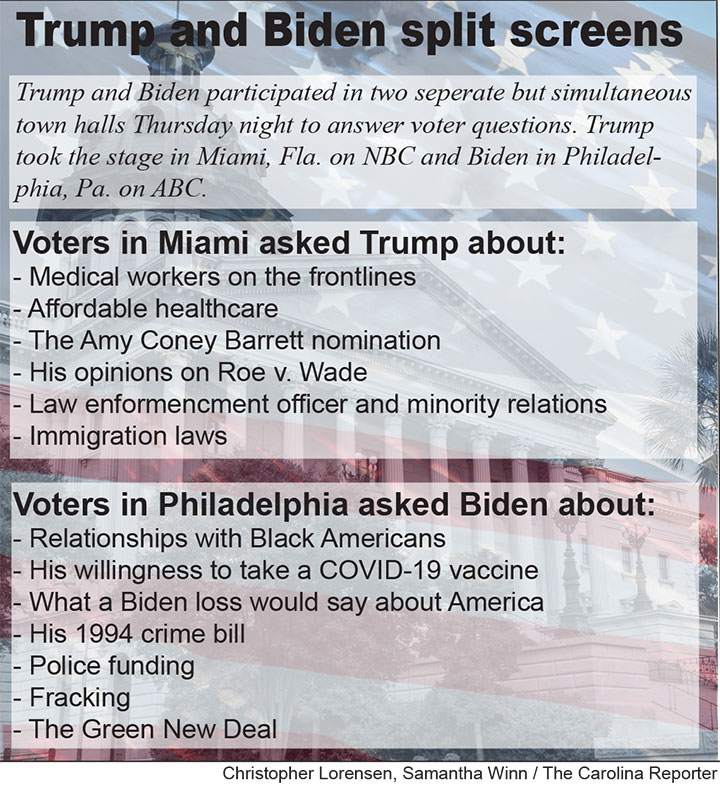