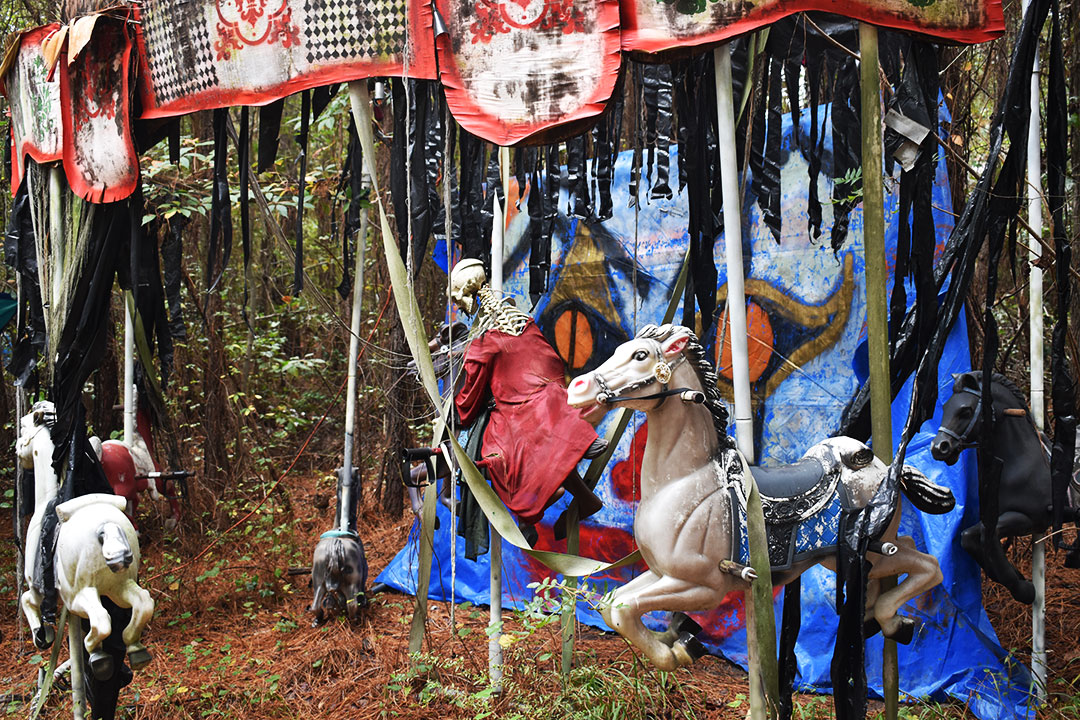 One of the scenes in the carnival section of Dark Castle’s outdoor haunted trail that was created using donated items. Photos by Ashton Van Ness

Dark Castle, originally known as the Dark Knight’s Terror Trail, first opened in Elgin, South Carolina, over 22 years ago by Larry Oates and his family.

Over the years, even after shutting the attraction for a period of time, the Oates and Stepp families have worked to create a Halloween attraction that employs theatrical scares, elaborate scenes and even a bit of comic relief.  Dozens of volunteers return each season to help them.

For $22 guests can experience the three different haunted Halloween attractions which include an indoor haunted house, a guided outdoor haunted trail and an interactive zombie survival zone complete with laser guns.

When the attraction first reopened, it was located in a space in the Richland Mall and they had to set up and take down the sets quickly for their few-weeks-long Halloween haunt. Immediately, the owners started looking for their own space.

“We kept trying to find property in Richland County, but it was very hard to get licensing for a haunted house there. So, when we found this piece of land outside of Richland County we were like, ‘That’s it, it’s perfect,’” Elizabeth Oliveira said. “My parents spent everything they had on this. My father sold his plumbing shop and bought this land with the money. This is our investment for the future.”

The Stepp family bought an over-9-acre piece of land in September 2013 and opened for the Halloween season the next month. Elizabeth Oliveira said they owe it all to their 65, more or less, volunteers.

“A lot of the old families that used to scare with us back in 1999, came right back out. Some of them had moved to other haunts when we closed, and when we told them we were reopening they came right back,” Oliveira said. “Most of them are close family friends of our family, and when we shut down in 2003 we never lost touch because it does become a community. I mean some of these volunteers we have from 1999 are now here with their teenagers.”

The community and family environment is important to everyone who gives their time to creating and performing the attractions at Dark Castle.

“We are a family, we look after each other. I actually met my wife working there back in 2013,” said James Gordon Martin, who has been volunteering at Dark Castle since the attraction first opened. “I’ve known most all of them for 20 years and some of them even longer than that. Several members of my own family work with us.”

Volunteers are not paid and commit their time simply because they love the community at Dark Castle and love to scare.

“I was 17 and I wanted to do something fun for Halloween, so I looked online for some place to volunteer,” Wingard said. “I happened upon what was then called the Dark Knight’s Terror Trail and they were like, ‘As long as your parents say it’s okay you are welcome to work with us.’ That was in 1999, and they’ve been stuck with me ever since.”

Like most of the volunteers, Wingard has a job outside of Dark Castle. Wingard works in the office of an automotive repair shop, but she still commits to creating sets months before the Halloween season and to being there each night Dark Castle is open. Wingard explained that her time at Dark Castle has been one of the greatest experiences in her life.

“I truly enjoy working with them and it gives me a chance to get to my theater roots, because they are such a theatrical-based haunt. We’re not a ‘pop out and yell boo’ kind of situation, we really put effort into making scenes unfold,” Wingard said. “The people who are there, the owners and Elizabeth and Eduardo, make you feel like you are a part of the family. It’s been an amazing ride.”

Eduardo is Elizabeth Oliveira’s husband. They met in New York in 2015.

“We used to work together at a theme restaurant, an all-horror themed restaurant,” Eduardo Oliveira said. “She used to be an actress there, and I used to be a server. We moved back here in 2016.”

Eduardo Oliveira is one of the few who commits all of his time to Dark Castle.

“I basically run the entire facility, so I have to take care of all the social media, all the art, all the ads we have,” Eduardo Oliveira said. “I’m also like a groundskeeper, and I keep an eye on everything.”

He said one thing he loves about Dark Castle, and that makes it different from other haunted attractions, is how they incorporate theatrical elements into each aspect of the indoor and outdoor haunts.

“We’re very theatrical, we even got an award last year for that, because the reviewers were amazed how theatrical we were because each scene tells a different story,” Eduardo Oliveira said. “There are a lot of jokes, a lot of interactions with the guests, and it’s basically a different experience every time because we improvise a lot.”

His wife, Elizabeth Oliveira, said at Dark Castle they try to incorporate comedy into their haunted attractions to give their guests a new and different experience.

“There’s a point when you go to a haunted house and you’re not going to be scared because you’ve seen it all, so it’s always refreshing when they do something you’re not expecting, like make you laugh,” she said. “It also puts you at ease so when the scare does come, it’s more of a jarring difference.”

One of her favorite examples of how they add humor to horror, is a character her dad has been playing for years.

“My father gets dressed up in a Minnie Mouse costume and he calls himself Maxi Mouse, puts on big eyeshadow and a five o’clock shadow, and he talks all funny,” Elizabeth Oliveira said. “I mean if Disney ever got a hold of what he was doing, I’m sure we’d get a cease and desist.”

The Halloween haunts are not the only attractions that Dark Castle has to offer. The attraction offers year-round games, such as laser tag, capture the flag, break rooms and In Our Midst, a real-life version of the game Among Us.

Elizabeth Oliveira said they are working on adding to their year-round attractions, as well as continuing to offer events for their community.

“We try to be part of the community, which is why we started offering the Christmas Trail, which is a Christmas light trail through the woods and that was free,” she said. “We did an event in May for the children called Mayday. We had tie dyeing and cupcake decorating and kid movies playing inside. It was a lot of fun.”

You can visit the attraction’s website to learn more about Dark Castle and to buy tickets. 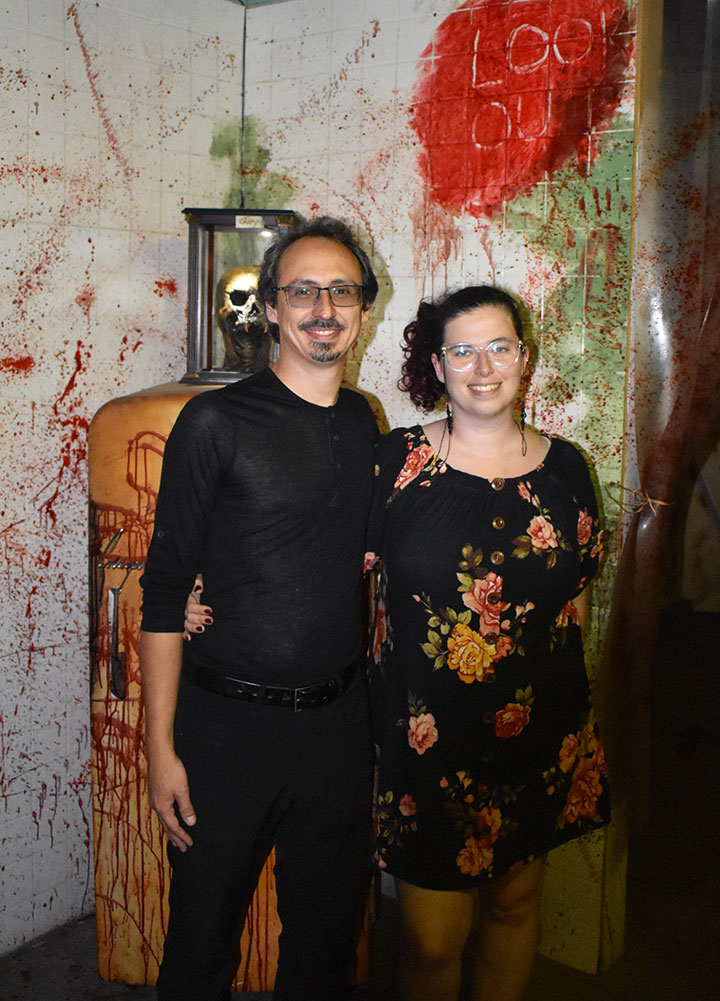 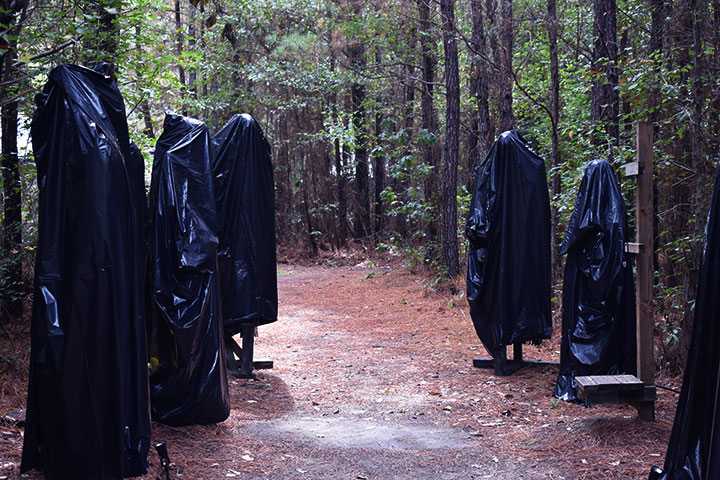 A scene with props, that have been covered due to rain, on the outdoor haunted trail, which boasts around 16 different scenes in total. 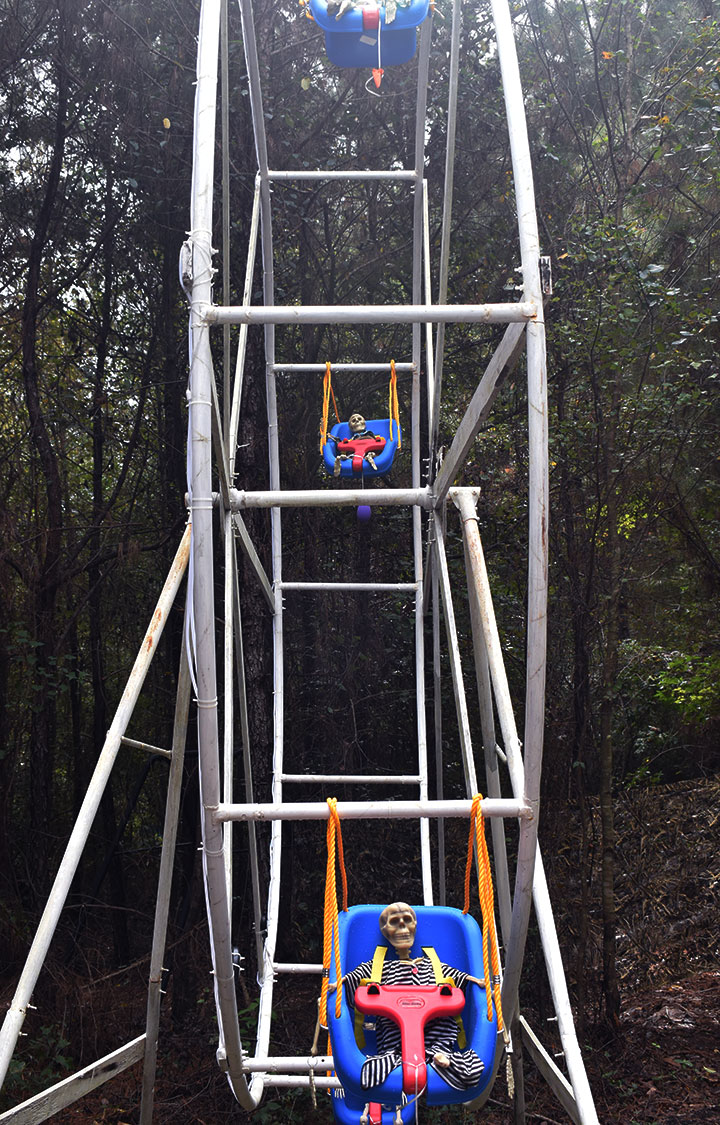 A ferris wheel in the carnival section of the outdoor haunted trail that was made using donated trampoline frames. 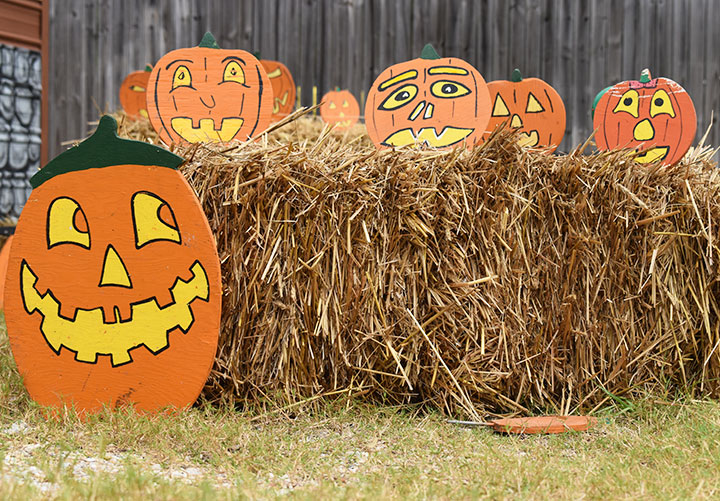 Wooden-painted pumpkins scattered around the grounds of Dark Castle for the attraction’s children-oriented activities. 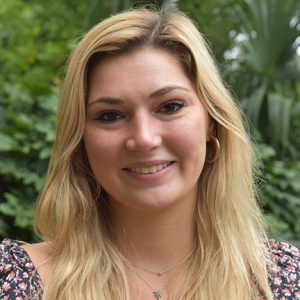