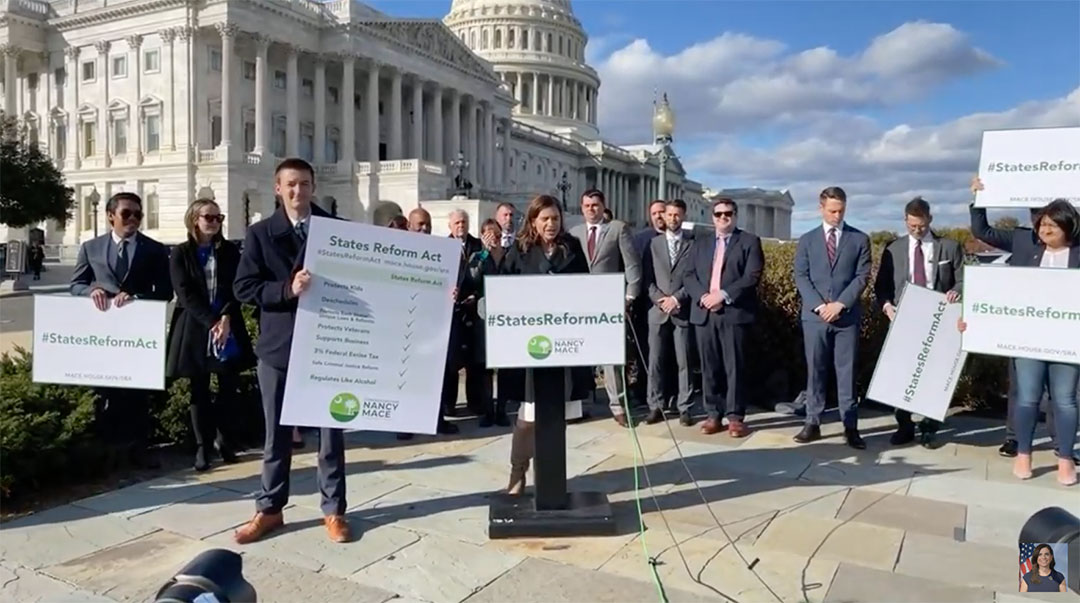 Congresswoman Nancy Mace presented the States Reform Act in front of the Capitol Building in Washington to inform the public of the bill’s initiatives as well as garner support to push the bill before The White House. The presentation was live-streamed through YouTube, with a 1,500 viewer peak. Photo courtesy of YouTube.

South Carolina Rep. Nancy Mace unveiled legislation Monday in Washington that would legalize cannabis at the federal level, deferring its status to states for commercial regulation and also impose a 3.75 excise tax on cannabis products.

Under the legislation, marijuana would be regulated by a newly created Alcohol, Tobacco, and Cannabis Tax and Trade Bureau, and a federal permit would be required to operate a cannabis business. Enforcement authority would be transferred from the Drug Enforcement Administration to a newly renamed Bureau of Alcohol, Tobacco, Cannabis, Firearms and Explosives.

A national age limit of 21 would be set for legal recreational marijuana products, which would be enforced by the withholding of federal funds from states that seek to lower that age.

“The States Reform Act takes special care to keep Americans and their children safe…” Mace said. “Washington needs to provide a framework which allows states to make their own decisions on cannabis moving forward. This does that.”

People who left the military with bad conduct or dishonorable charges solely for cannabis offenses would be entitled to an upgrade to general discharge. Businesses and employers would be prevented from discriminating against military veterans due to previous cannabis consumption.

Revenue from the cannabis tax would go to a newly created public safety programs that would assist community policing, and help those who have previous criminal marijuana convictions to re-enter the community.

Though the States Reform Act will join other cannabis bills introduced before Congress such as the MORE Act and the Cannabis Administration and Opportunity Act, the new bill is unlike other Democratic-led modest efforts, she said. Mace is sponsoring the bill along with five other Republican cosponsors, California Rep. Tom McClintock, Arkansas Rep. Don Young, Florida Rep. Brian Mast, Colorado Rep. Ken Buck and Michigan Rep. Peter Meijer.

There has long been skepticism that Democratic-led legislation bills would be able to pass without GOP buy-in. Therefore, industry stakeholders see an opportunity in this Republican-led effort.

News of this bill led to surge in stock prices for many publicly traded cannabis companies like Hemp, Inc. who saw surges around 13.79%, a jump from the typical 50 million shares to 80 million shares traded in just one day.

Boris Jordan, chairman of  Curaleaf Holdings Inc. predicts the forthcoming legislation will upend the coming elections. Jordan sees Mace’s efforts as an attempt to steal thunder from Democrats who have used cannabis to boost campaigns, but have failed to follow through on reforms.

“They put a law together that is much more transparent than some of the Democratic laws on the table,” Jordan said in an interview with Bloomberg. “It’s a very good law.”

In a Gallup poll released earlier this month it was recorded that 68% of U.S. adults back the efforts to legalize cannabis. Despite the majority percentage, President Joe Biden continues to oppose recreational legalization.

President Biden has been supportive of more modest proposals to federally decriminalize cannabis, legalize medical use and let states set their own policies. It is expected that opinions towards the newly proposed bill would remain consistent with the President’s past stances, though the additional initiatives included in the bill may sway votes.

Mace was seen an unexpected proponent of the bill by some, considering South Carolina is a largely conservative Republican state. The news of her sponsorship made headlines at the same time as the introduction of comedians Seth Rogen and Sarah Silverman as partners with a nationwide voter project known as Cannabis in Common.

Silverman and Rogen serve as the faces of the campaign calling on voters to pester their representatives to push harder for federal reforms. Participants can reach out via social media, texts, emails and QR codes directly through the website to get the message out.

“Despite what you may have heard, Americans can actually agree on something,” said Rogen. “And that something is weed.”