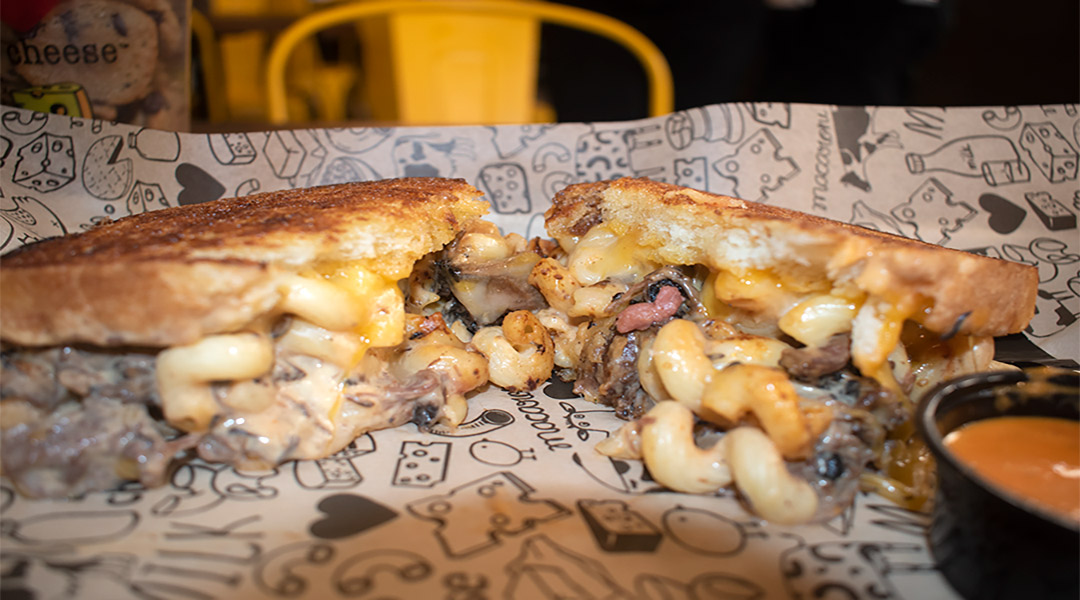 One of the “build your own grilled cheeses” available at I “heart” mac and cheese and more, restaurant that opens Wednesday in Blythewood. Photos by Sheila Paz

Shametra McMillan knows her town of Blythewood, South Carolina, like the back of her hand, from the shopping centers and schools to the restaurants serving up comfort food each day.

So when she was asked to be the general manager for a national chain restaurant’s local franchise that focuses on a perennial favorite, macaroni and cheese, she jumped at the chance.

“I have been waiting for this for two years,” McMillan, a former nurse, said. “It was crazy how it just fell into my lap.”

Nestled among popular chains such as Starbucks and Jersey Mikes at 1033 Roberts Branch Pkwy, Suite 202, I “heart” mac and cheese — all lower case letters punctuated by a big red heart — will hold its grand opening Wednesday from 11 a.m. to 10 p.m.

Mac and cheese, widely known as a popular Southern comfort food, had its first recipe recorded in the 18th century and was first boxed and sold in the early 20th century, but a restaurant entirely dedicated to the meal is a 21st century creation.

National director of marketing Matt Pappas said the fast casual chain — similar to restaurants such as Chipotle and Blaze Pizza — will be the area’s only dining experience that focuses primarily on the dish.

“I don’t have any competition. You know? Where can you go and get a bowl of macaroni and cheese as an entree? Nowhere. You can maybe get it as a side,” McMillan said.

Giving the restaurant a fun and energized environment is a big part of its branding.

“It’s just a very lively atmosphere. It’s a way for everybody to kind of feel like a kid,” Pappas said. “We’ve basically made mac and cheese an entree, an adult food, to relive their childhood favorite dish.”

McMillan wants to put her own spin on the love for mac and cheese felt within the restaurant.

“When someone says, ‘I want extra cheese,’ I want everybody to yell, ‘Make it cheesy baby!’ you know?” McMillan said.

The national brand, which was founded in 2015, currently has 20 operating locations, 18 of which are franchise-owned. Pappas said the South Florida-based chain wants these stores to bring a local twist to the brand.

Columbia, he said, had all the requirements.

“Our Columbia location — where it is, the structure of what’s nearby, the foot traffic, the drive-by traffic, et cetera — it fit perfect for our brand, especially with the need of the community,” Pappas said. “It was just a great fit all around.”

The brand has 16 more franchises on the way, including a location in Fort Mill, South Carolina.

The director of training for I “heart” mac and cheese, Keilani Klimzuk, travels to each franchise location during its soft opening to help train employees. “Serving great comfort food without ever sacrificing great customer service,” she said, is the brand’s ultimate goal.

“At the end of the day, we just want for the franchise to succeed,” Klimzuk said. “If the franchise succeeds, the brand succeeds.”

I “heart” mac and cheese has already begun to cement its place in the Columbia community, becoming a part of the Columbia Chamber of Commerce and initiating sponsorships with schools in the area.

“Our heart and love is community too, so we like to really be active in the community,” Pappas said.

McMillan and her staff are excited for the grand opening after sending out 10,000 flyers in the surrounding area.

“I think that this place is going to do big numbers,” McMillan said. “People are going to really like it.” 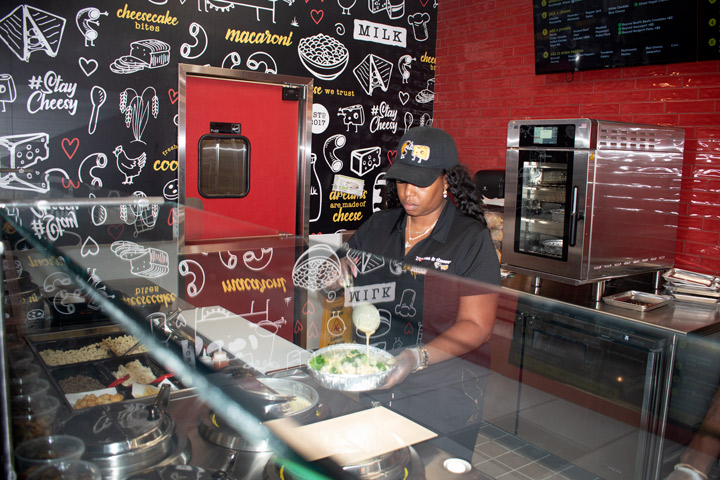 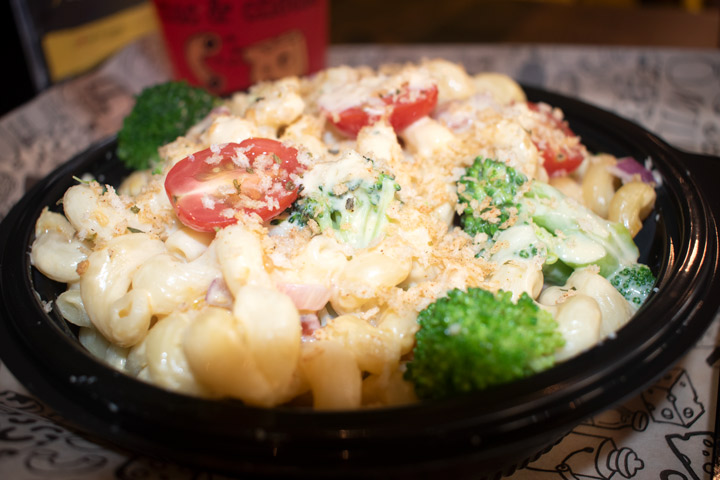 The restaurant offers the option to build your own mac and cheese bowls and grilled cheese sandwiches. 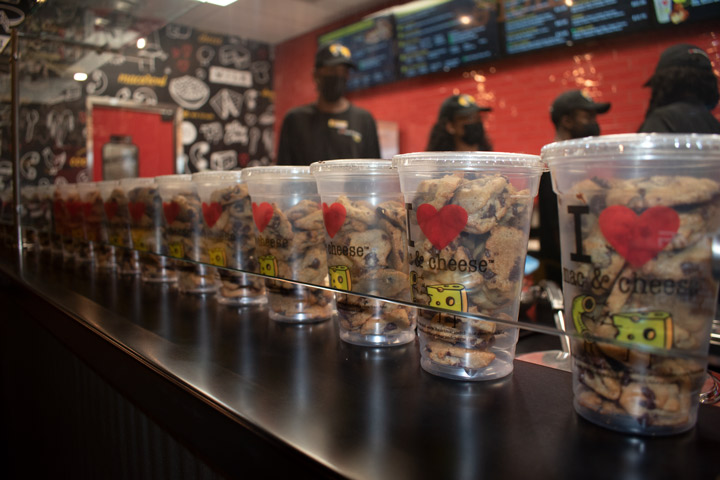 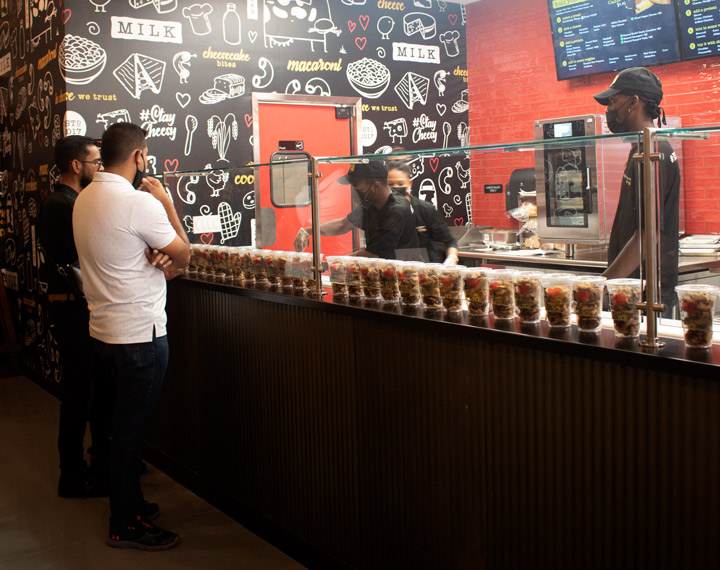 The restaurant shares a similar “build your own” style as Chipotle and Blaze Pizza, according to McMillan. 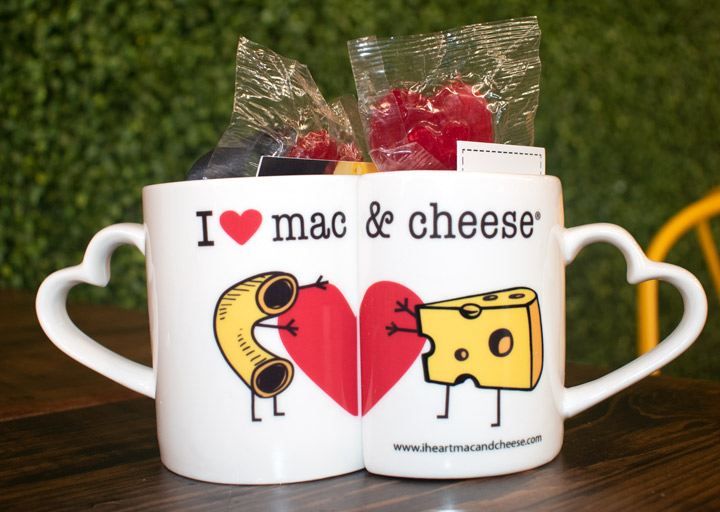 The grand opening will feature raffles throughout the day for many prizes, such as these mugs. Photo by Emma Dooling

The location held its soft opening Monday and Tuesday. Photo by Sheila Paz 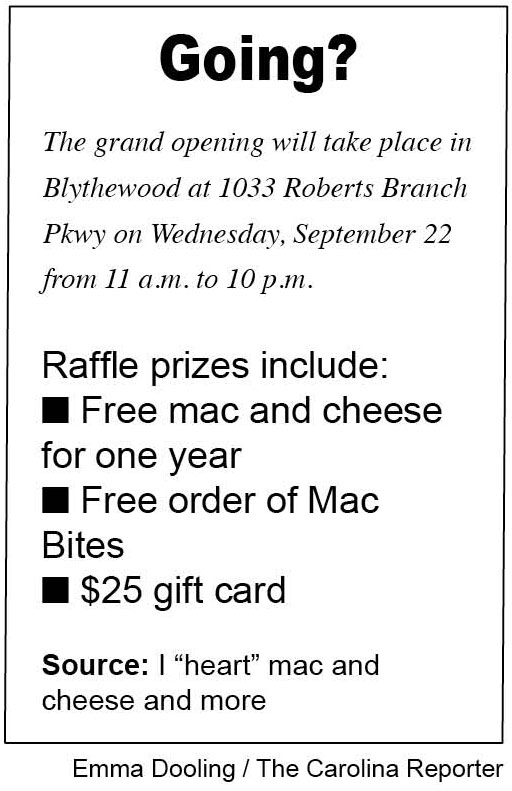