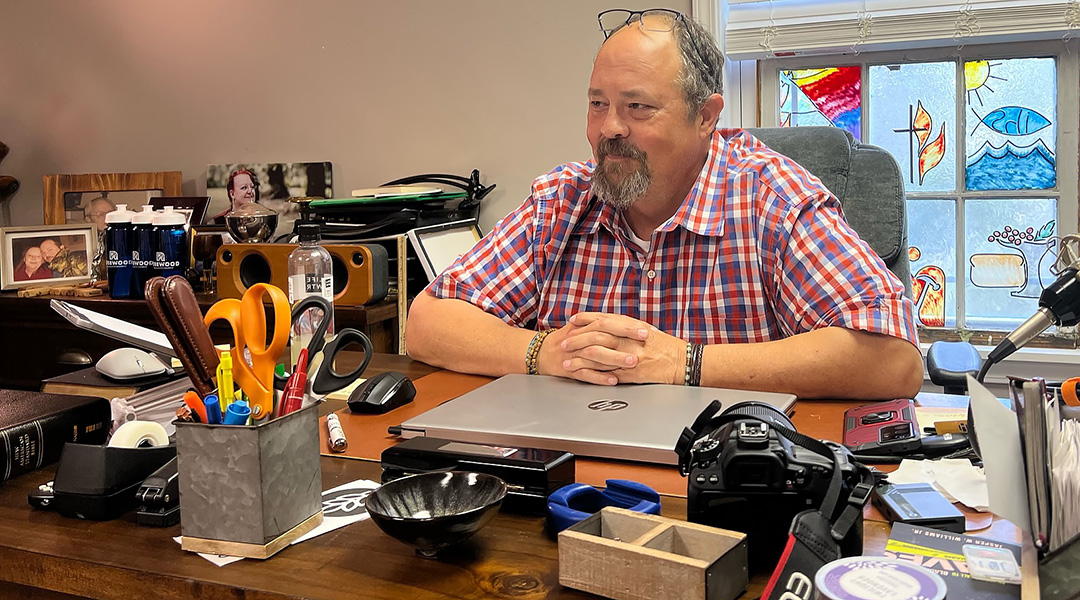 Photo of Pastor Bob Morgan in his office at Rosewood Community Church. Photo by: Danielle Wallace

Pastor Bob Morgan limped on his soon-to-be surgically repaired knee into the conference room adjacent to his office. He returned with a horizontal, black-and-white photograph from 1939 showing the original Rosewood Baptist Church and congregation.

“Look at all the children and the Bibles they’ve got in their hands,” Morgan said. “How does a church that’s that die?”

More importantly, how does it reinvent itself?

Rosewood Community Church, formerly known as Rosewood Baptist Church, moved about a mile away from its old location across from Publix to a new location closer to Rosewood Elementary School after church leaders put the property up for sale in 2019. Moving to a smaller building, though heartbreaking, has allowed the church to reach farther into the Rosewood neighborhood and connect with other communities, including residents of a halfway house down the street, Morgan said.

Rachel Miller, who joined Rosewood Community Church between 2018-2019, said she was drawn to the church’s openness and effort to reach the community.

“This church is really good at ministering to people that are in extremely difficult and challenging situations,” Miller said. “I think that really is our heart.”

For Morgan, the goal was to tap into the energy of the church’s past, even if it meant losing members who were reluctant to change.

“These people were spiritually, mentally, emotionally vested in their church,” Morgan said. “And then the question for me has to be, do I go ahead and just let it die, and keep everybody happy? Or do I shake up the cart just in order to keep it alive?”

A decrease in church attendance across the country, most recently due to COVID, has left many churches searching for ways to keep their doors open. An annual Gallup poll found 62% attended worship services between 2008-2010, compared to 49% between 2018-2020.

And data from the 2021 Southern Baptist Convention Statistical Summary shows nearly a 19% decrease in weekly attendance of church from 2020 to 2021.

The original church on Sloan Avenue held about 1,100 people. But when Morgan arrived in 2015, only 40-50 people filled the pews each Sunday, he said. The remaining members, though few, were loyal.

Jay Lamb, who was born into the church in 1963, said he is the last remaining congregant from the original church location. Lamb rarely saw younger people at the church, perhaps because members wanted to live in the “glory days,” he said.

“I’m like, ‘Well, until we get some young blood in the church, you know, the church isn’t going to thrive,’” Lamb said. “Because when we’re gone, who’s left?”

A gradual and methodical plan is the healthiest way to introduce large changes in a church, according to Morgan, the pastor. “But when you have no time, it’s what I call C.O.D. — change or die,” he said.

Morgan said COVID was a blessing for the church, as it was no longer a revitalization project. He decided with a new location came a new mission. The church could become a multicultural, multi-generational and multi-ethnic startup church, he said.

Vaviel Crane, a teacher at Spring Valley High School, joined the church as a pianist in 2019. She said she has assumed multiple staff roles since, taking on secretarial and administrative work.

Crane said the old church building, despite its large size, kept the church from reaching its potential.

“Being here, we’re building our own church, and this feels like the church that we’re supposed to be,” Crane said. “I feel like moving out of that building was the very first step in the right direction on that road.”

The new church provides a unique environment for worshippers. Large couches fill the community connections area where services are held each Sunday. The lobby has a coffee- and snack-station, and there is an outdoor deck to hold services when the weather is nice.

Shawn Rankin has been a Rosewood community member for 20 years and is a recently ordained deacon at the church. He is sad to see the original church go but said he’s grateful the church community remained intact.

“I think now, even with the smaller footprint, I think we’re going to have a bigger effect on the community just because of the vision,” Rankin said.

That vision, Morgan said, is to create a gathering place that reflects the community.

When looking at Rosewood’s community members, Morgan said, “Why aren’t we looking out there on Sunday morning at (the) congregation and seeing those demographics?”

Kevin Griffin, another newly ordained deacon from Gilbert, South Carolina, commutes 45 minutes each way to the church. Griffin said the new location is reaching parts of the community it couldn’t before.

A halfway house is just a short walk down the street. A few residents from the house have become regulars at the church, and one recently got baptized.

“I was talking to one of the men, and he was like, ‘I just prayed for this,’ you know?” Griffin said.

“So if you connect those dots, then we’re here in the right place. Because if we had been down there, it probably would’ve been a little too far to walk from the houses down there,” he said. “So I think we’re here where we need to be.”

Two years ago, Morgan took some scrap wood and cut it into narrow strips for church members to write out their favorite scriptures by hand, he said. Those scraps now hang as a cross in the church’s community connections area, serving as a symbol of unity.

Morgan hopes people come as they are. With no dress codes or regulations, church members can feel comfortable being vulnerable, open and accepted.

“If someone perfect showed up, they’d screw up what we got going on,” Morgan said with a laugh. “I tell people: ‘We’re all here because we’re not all there.’” 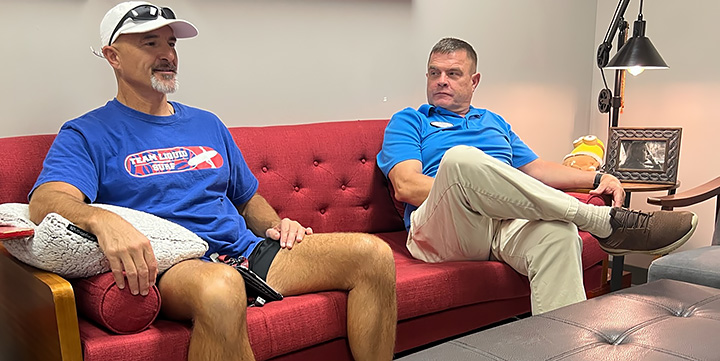 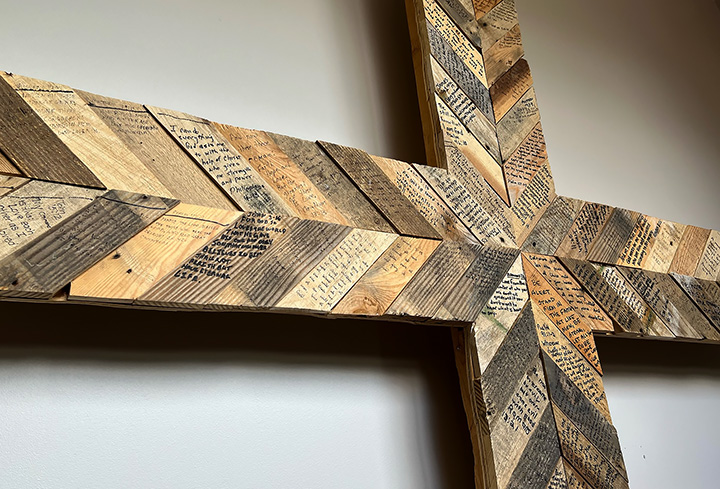 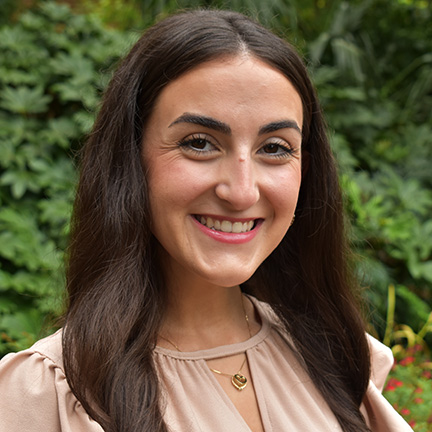 Wallace is a journalism major at the University of South Carolina minoring in English. The Charleston native recently covered a drag queen bingo event as part of her interest in diverse communities. An Italian from Boston at heart, Wallace is drawn to tales of loved ones uniting in times of tribulation. She is enthusiastic about creative writing, long-form features, documentaries and Tony Soprano. 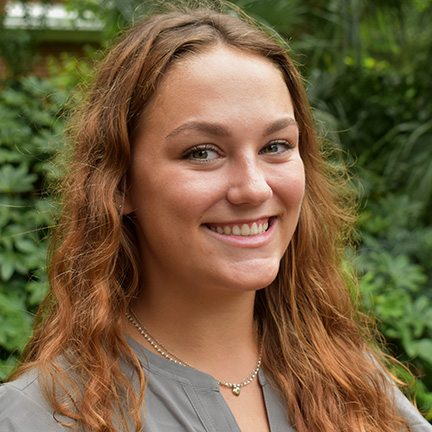 Pitvorec is a senior journalism major at the University of South Carolina. She enjoys breaking news, recently reporting on the spike in gas prices. She also covered chickenpox outbreaks across the state. She plans to use her minor in law and society in her work to capture K-12 issues and more diverse issues affecting the community.