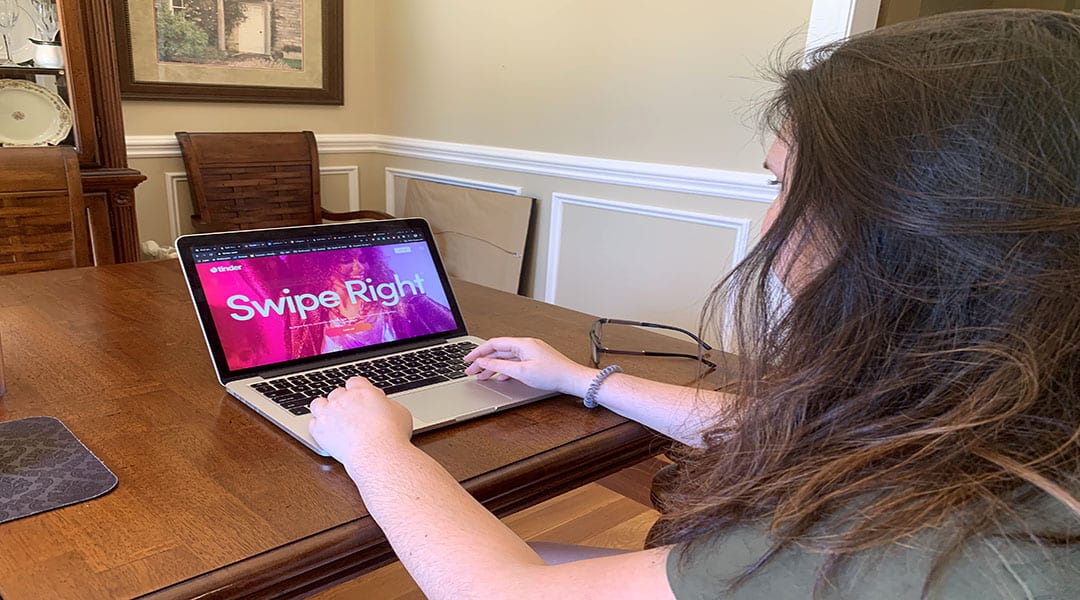 Reporter Maddox McKibben-Greene sits in front of her laptop, which shows the homepage for Tinder telling users to “swipe right.” Credit: Maria Jutton

In the midst of a worldwide pandemic, Chris McLauchlin can’t help but notice a new zing in his dating app life and even the rekindling of old matches on apps such as Tinder and Bumble. Some who haven’t connected in years are back in his online romantic life.

“They’re now reconnecting in a new way. The doom and gloom and sort of apocalyptic feeling of the pandemic has dropped the barrier to reaching out some, I feel,” McLauchlin, a long-time dating app user and graduate student in the University of South Carolina physics department, said. “People are more willing to take the risk to try and reconnect.”

It’s clear that dating app use has risen among young people since the start of social distancing last month. According to representatives from Tinder, Bumble and Hinge – three of the most commonly used sites in the pantheon of dating apps – use is surging across the board. As people all over the world experience both social isolation and lack of physical contact, the desire for meaningful conversation has risen.

“Even though we’re socially distant, Tinder members haven’t disconnected. There were more swipes on Sunday, March 29th than on any single day in the history of Tinder (3+ billion swipes),” Tinder said in a statement, with the average length of conversations since becoming 19% longer across the U.S.

Last year, Tinder ranked as the No. 1 dating app in terms of popularity (7.86 million users), according to Statisa.com. Tinder allows users to “swipe” through other users’ profile cards, which often include a series of pictures and a short bio. A left swipe indicates a user does not want to talk to someone, while a right swipe shows there is interest – and, if a user is lucky, that person will have swiped right, too, leading to a “match.”

This trend can be seen in Bumble, an app similar to Tinder that requires female users to send the first message to a male match, and Hinge, which brands itself as more “relationship-oriented” than other apps.

Caroline Moore, a sophomore at UofSC studying marketing and finance, has been using dating apps for almost two years now. She says she is taking advantage of the increase in users she has seen on Tinder.

However, Moore says she is mostly using these apps to pass time and to alleviate boredom, though she no longer entertains boring conversations.

“‘How’s your quarantine going?’ is a question I hate. We’re all doing the same thing: doing homework and drinking,” Moore said. “I don’t think anyone is looking for anything serious right now. I’m certainly not.”

Evan Cowles, a night auditor at Sheraton Hotel in Columbia, recently ended a relationship and is picking up Tinder for the first time in a while. He says that while he has been getting more matches this time around, it isn’t as exciting right now.

“I’m almost deterred from starting conversations with girls I’d be interested in now because I don’t know how long this is going to go,” Cowles said. “I don’t want to have it fizzle out because it’s only online conversation. Not having the possibility of a prospective meetup makes it hard.”

Cowles also said that he’s had more success with Hinge than with Tinder or Bumble.

Sarah Wells, a structural engineer at Boeing, mainly uses Hinge for her dating app needs. According to her, Hinge’s profile prompts make for more interesting conversation.

As for what Wells is looking for on Hinge, it varies; however, just having moved to St. Louis, Missouri, from Daytona Beach, Florida, she’s trying to find a spark with someone new, though social distancing is making that difficult.

“I don’t trust men, so I don’t know,” Wells said. “It’s not like we can go on real dates [right now]. I can’t meet his friends. We can’t do all these important things to figure out where we stand.”

McLauchlin also feels disheartened by the inability to physically meet with matches, he believes the pandemic has opened the door to revisit past connections.

In response to social distancing, Tinder has made its “Passport” function free. Passport is a feature that allows users to set their location to anywhere in the world and match with people there. While useful for some, McLauchlin says he hasn’t utilized the feature much.

“Passport feels weird, in a way,” McLauchlin said. “[It’s] like I’m imposing in this community, like I’m sticking myself somewhere I don’t belong.”

However, he does feel the appeal of connecting with users globally and has recently chatted with people across the country and the world.

“It’s weird I can have as close of a connection with someone thousands of miles away as someone in my own city right now. It’s just surreal,” McLauchlin said. 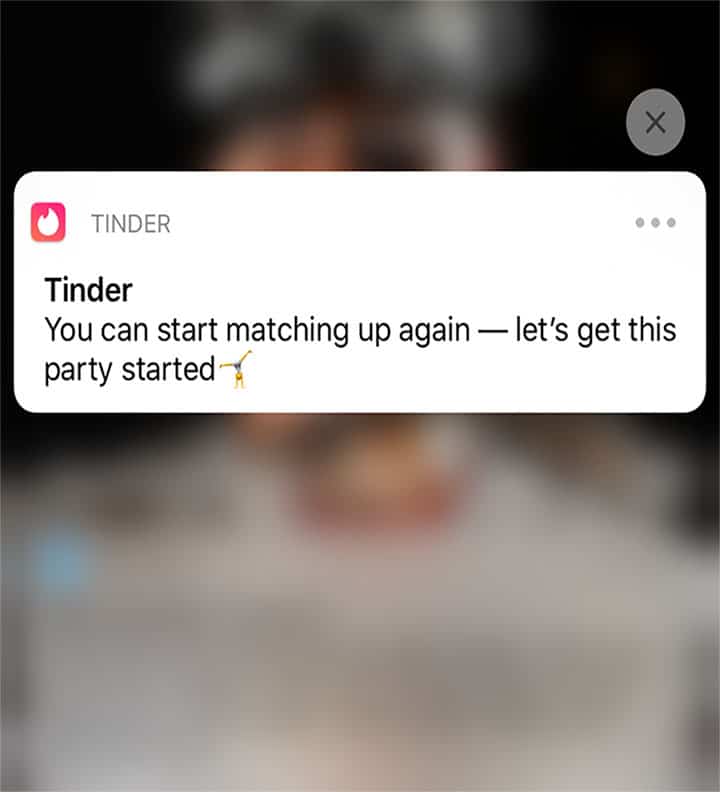 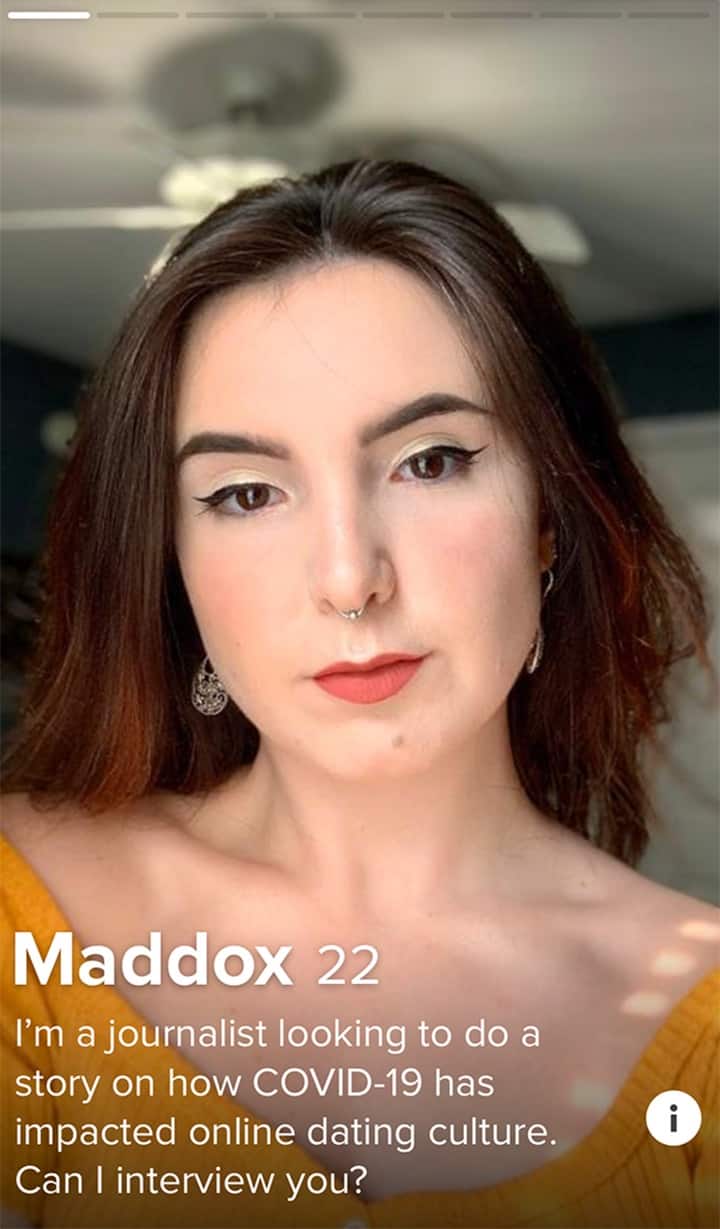 Reporter Maddox McKibben-Greene’s profile invites users to engage with her about their recent online dating habits. 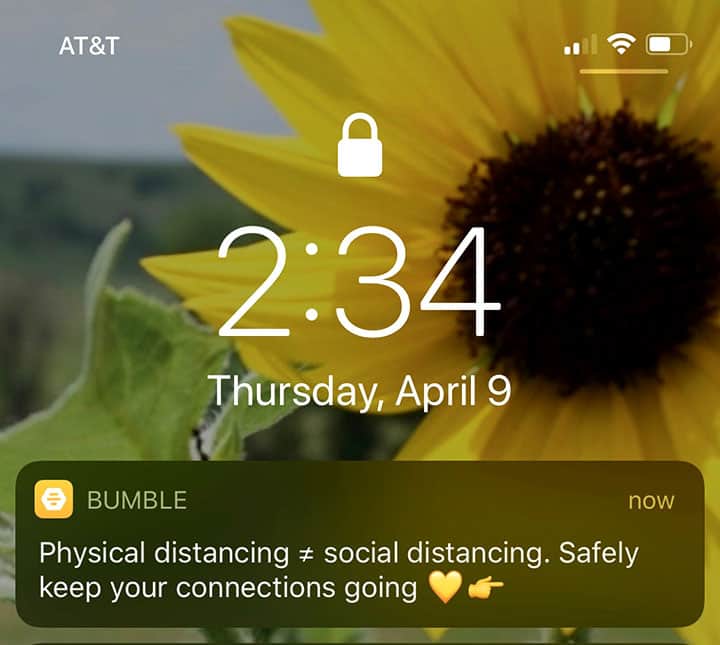 A notification from Bumble tells users to remain social on the app.