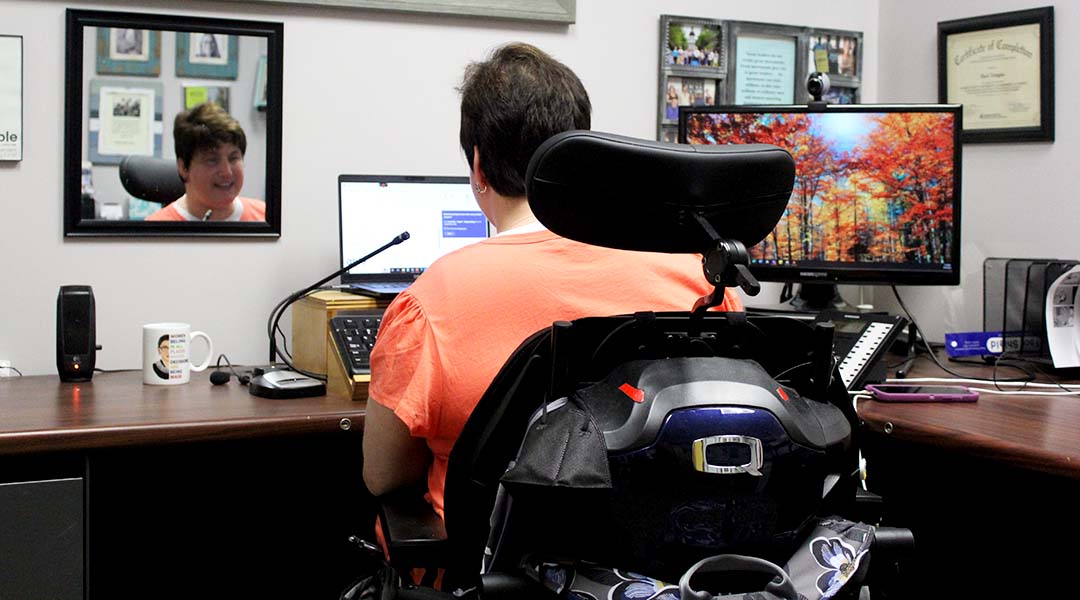 Dori Tempio, Able S.C.’s director of community outreach and consumer rights, works at her office on Sept. 15, 2022. Tempio helps workers with disabilities advocate for themselves and find competitive employment. Photo by Kailey Cota.

Imagine working in a factory where you put stickers on boxes for eight hours a day. Imagine getting paid $3 per hour for that work. More than 1,000 South Carolinians live this experience.

And it’s legal. But not for much longer.

Gov. Henry McMaster signed a bill in May to phase out the practice of subminimum wage, a law that allows employers to pay people with disabilities less than the state’s minimum wage.  The law was passed in 1938 but will end in 2024.

The move to end subminimum wages comes after years of lobbying from groups around the state to do even more to stop sticking people with disabilities into dead-end jobs and to start training them with skills they can apply to attainable careers.

In July 2022, 1,300 employees in South Carolina and 38,000 employees nationwide were making subminimum wage, according to a report from the U.S. Department of Labor.

The crux of the problem is that there’s a less than 5% chance that people will transition out of these unskilled jobs into meaningful careers, according to Able SC, a disability-led organization that serves workers with disabilities.

Working for less than minimum wage makes you feel unvalued, according to Angela Greene, 49, who spent 20 years making $3.50 an hour as a contract janitor working in office buildings and hotels.

She felt like she “fell through the cracks” as a person with a disability trying to get a job and credits God for getting her into a higher-paying job. She’s now working as a dining room attendant at USC’s student union and plans to get her GED.

“Employment is so key to progressing in your life and having a sustainable life,” said Sandy Jordan, director of employment programs at Able SC. “If you think about people that you first meet, what’s one of the first things you ask them? ‘What do you do?’ If you don’t have that story to tell, you’re kind of really left out of our society.”

The S.C. Department of Disabilities and Special Needs is the state’s main provider of placement services for subminimum wage jobs.  The department did not respond to Carolina News and Reporter for comment.

Disability and special needs providers who pay people less than minimum wage have until August 2024 to raise their wages.

“I think it goes back to how our culture views disability — it’s seen as less-than,” said Dori Tempio, Able SC’s director of community outreach and consumer rights. “Even though we may not do things the traditional way — subminimum wage comes from the idea of ableism.”

Ableism is a term that assumes able-bodied people are superior to those with disabilities.

Subminimum wage was introduced as part of the federal Fair Labor Standards Act of 1938, which also established workers’ rights to a minimum wage and overtime pay and prohibited child labor.

A section of the law states that workers with disabilities can be paid less than minimum wage if their disability hinders their productivity in comparison to that of an able-bodied worker. The law’s goal was to help people with disabilities find work without discouraging employers from hiring them.

South Carolina is the third state in the Southeast and 12th in the country to break from federal law and end the subminimum wage.

Typically, the work that people with disabilities are assigned involves mundane, repetitive tasks, such as putting stickers on boxes all day, Able SC’s Jordan said.

It’s not work that teaches people skills they can transfer into careers, she added.

“As a person with a developmental disability … we were put in jobs that were not showcasing our talents,” Tempio said, adding that she has never been paid less than minimum wage. “We were put in jobs based on what people’s visions of our disabilities were.”

S.C. Sen. Katrina Shealy, R-Lexington, introduced the legislation to end the subminimum wage in February 2021 after talking to Able SC’s president and CEO.

Shealy introduced multiple versions of the bill, but the House kept failing to pass them, she said. She thinks the bill eventually went through because lawmakers finally understood that people can’t support themselves making just a few dollars an hour.

“Everybody deserves that opportunity to work to the best of their opportunity,” Shealy said. “We shouldn’t hold anybody back because of their race, their gender or their disability.”

Jordan acknowledges businesses that currently employee people with disabilities at subminimum wage likely will not continue to employ them at a higher rate.  Therefore, job training and placement services will be especially important moving forward.

But Greene said some of her former coworkers may have mixed feelings about the change if it causes them to lose their jobs.

“I feel great – and concerned, because I’m thinking about the ones who really enjoy being in (their current jobs),” Greene said. “What is the avenue for them?”

Workers who lose their jobs can turn to organizations such as Able SC and the South Carolina Vocational Rehabilitation Department to get trained for competitive careers. 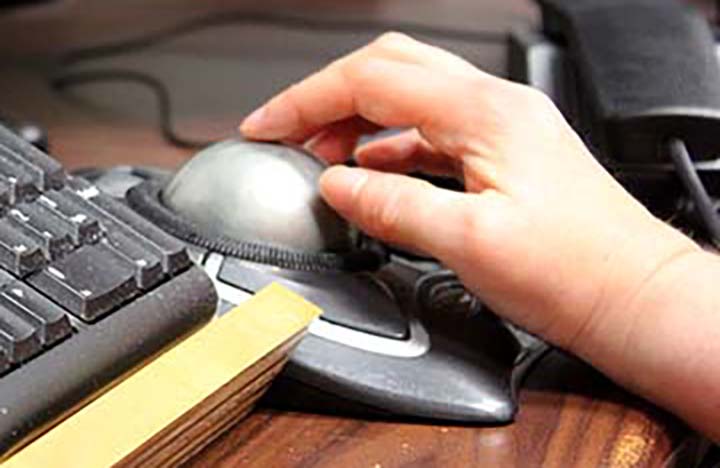 Dori Tempio, Able S.C.’s director of community outreach and consumer rights, uses her adapted mouse at her office on Sept. 15, 2022. Tempio helps workers with disabilities advocate for themselves and find competitive employment. Photo by Kailey Cota. 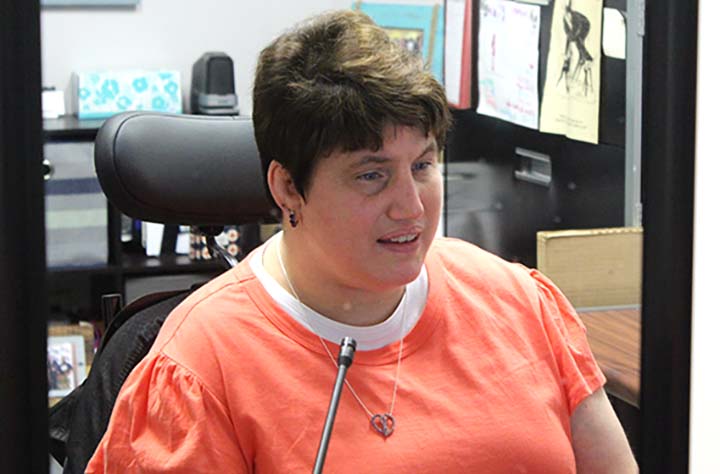 Dori Tempio, Able S.C.’s director of community outreach and consumer rights, is seen through a mirror in her office on Sept. 15, 2022. Tempio helps workers with disabilities advocate for themselves and find competitive employment. Photo by Kailey Cota. 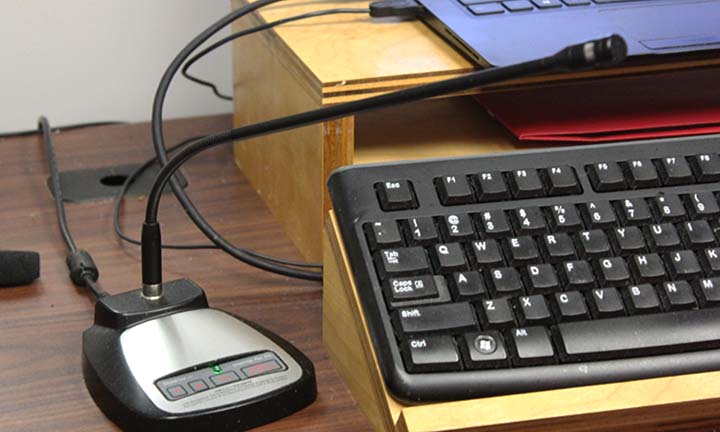 Dori Tempio, Able S.C.’s director of community outreach and consumer rights, uses a microphone with speech-to-text technology to send an email at her office on Sept. 15, 2022. Tempio helps workers with disabilities advocate for themselves and find competitive employment. Photo by Kailey Cota.