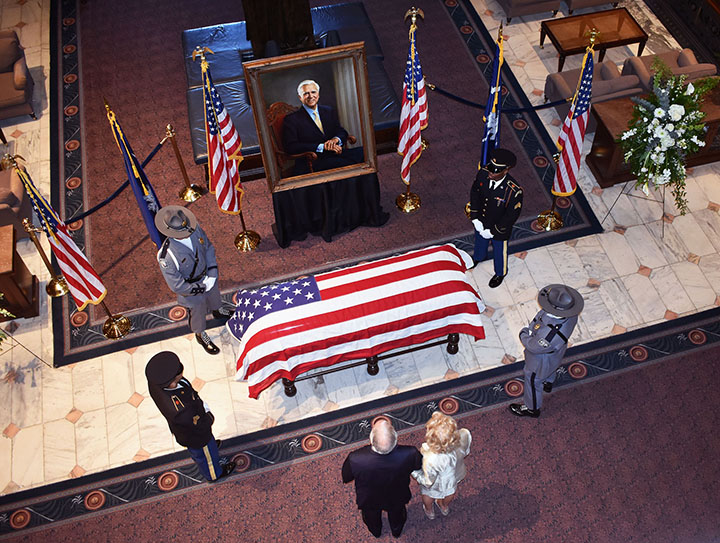 South Carolina Gov. Henry McMaster and his wife, Peggy McMaster, pay their respects to the late governor and senator Ernest “Fritz” Hollings at the State House on Monday as an honor guard stands at rest. (Mary Ramsey / Carolina Reporter)

A fixture of South Carolina politics made his final journey up the steps of the State House Monday.

The flag-draped coffin carrying the body of former governor and U.S. Sen. Ernest “Fritz” Hollings, a southern Democrat who wielded power for more than a half-century, arrived on a sunny Monday morning for a daylong public remembrance.

An honor guard composed of members of the South Carolina Highway Patrol and South Carolina National Guard carried his flag-draped coffin to its resting place in the lobby situated between the Legislature’s two chambers. There, he lay in repose throughout the day as family, friends, former staffers and strangers paid their respects to the man known for overseeing the desegregation of higher education in South Carolina.

For those that did know him, the day was a poignant reminder of the power and influence Hollings wielded in his home state in 50 years of public service as a lieutenant governor, governor and senator.

Hollings’ three living children and other members of his immediate family were the first to enter. He was predeceased by his second wife, Rita Liddy “Peatsy” Hollings, and three children.

The family was followed quickly by Gov. Henry McMaster and his wife, Peggy McMaster.

“Fritz worked hard, he campaigned hard, and I’m glad to have known him,” the Republican told reporters as he left the event.

After that, a stream of public officials including state Attorney General Alan Wilson and Rep. Joe Wilson made their way through the lobby ahead of members of the general public and other friends and former colleagues.

African Methodist Episcopal Bishop Fred James was a prominent figure in civil rights and religious activism during Hollings’ time in office. James rose from a wheelchair to say a prayer over the casket before touching his hand to his heart and bowing.

Former South Carolina Democratic Party chair Jamie Harrison, who is looking to challenge Sen. Lindsey Graham in 2020, made his way through the line of mourners twice. Harrison urged others to go to the State House to pay their respects on his Twitter Monday, and previously noted on social media that Hollings gave him his first Washington internship.

Like Hollings and his late wife Peatsy, former SCDP and Democratic National Committee chair Don Fowler and his wife Carol have long been fixtures of Democratic politics in South Carolina. On Monday, the Fowlers said they’re hopeful that today’s generation of politicians at the State House and U.S. Capitol can learn from Hollings’ approach to governance.

“Senator Hollings was maybe the greatest statesman this state has ever known,” Fowler said.

At the time of his death April 6, Hollings was the oldest living former U.S. senator. At 97 years old, he lived almost as long as his near-constant Senate counterpart Strom Thurmond, who died in 2003 at 100 years old. Together, they were the longest-serving Senate pair in the nation’s history.

In addition to his time in politics, Hollings was awarded the Bronze Star for his service in the Army during World War II.

Services for Hollings will continue Tuesday with a memorial service at Summerall Chapel on the campus of The Citadel, his alma mater. Former Vice President Joe Biden will eulogize his longtime Senate colleague, and McMaster and Rep. Jim Clyburn are also scheduled to speak. 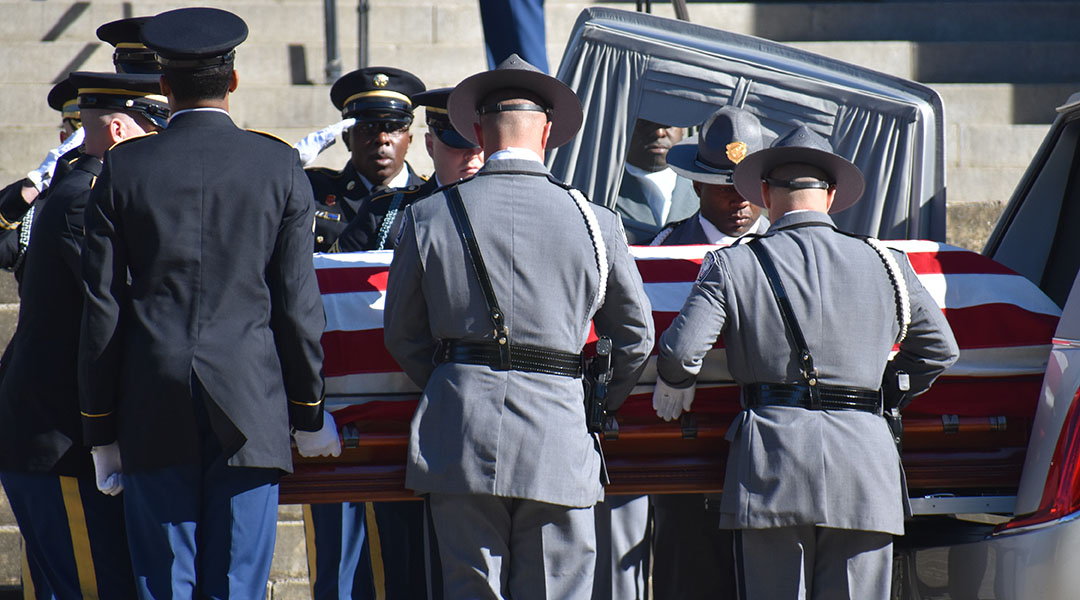 Members of the South Carolina Highway Patrol and South Carolina National Guard carry the coffin of former governor and senator Ernest “Frtiz” Hollings up the steps of the State House on Monday. (Zoe Nicholson / Carolina Reporter) 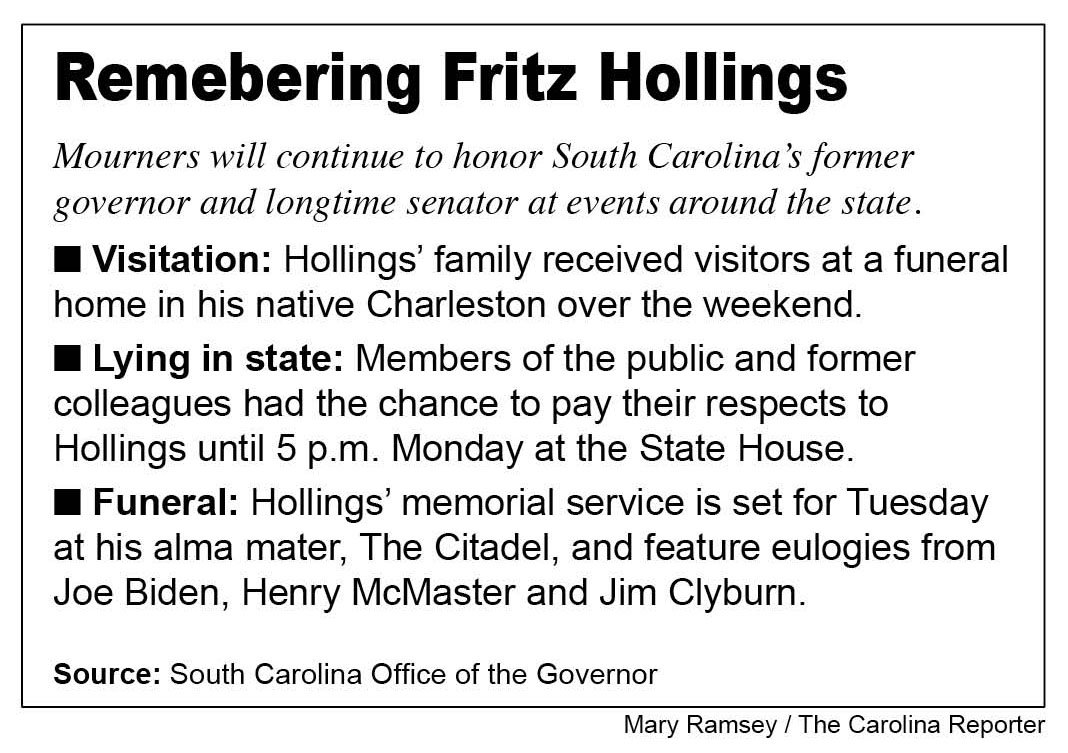 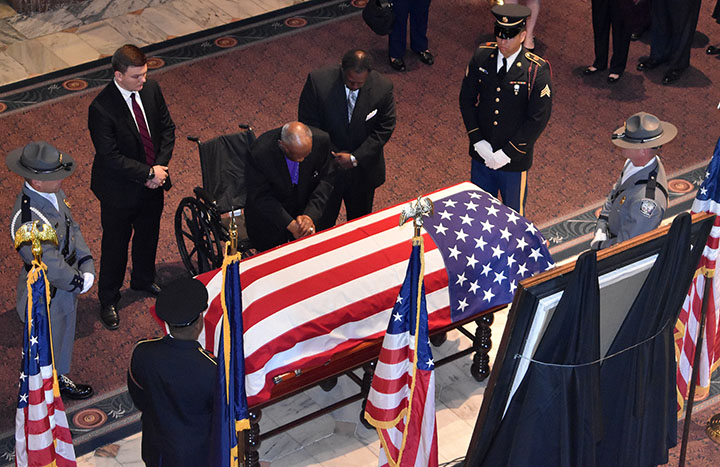 African Methodist Episcopal Bishop Fred James, a prominent civil rights activist and religious leader in the Palmetto State, rose from his wheelchair to say a prayer over the casket of Hollings, known for presiding over the desegregation of higher education in South Carolina. (Mary Ramsey / Carolina Reporter)