Takeaways from No. 2 South Carolina’s win over No. 17 Kentucky 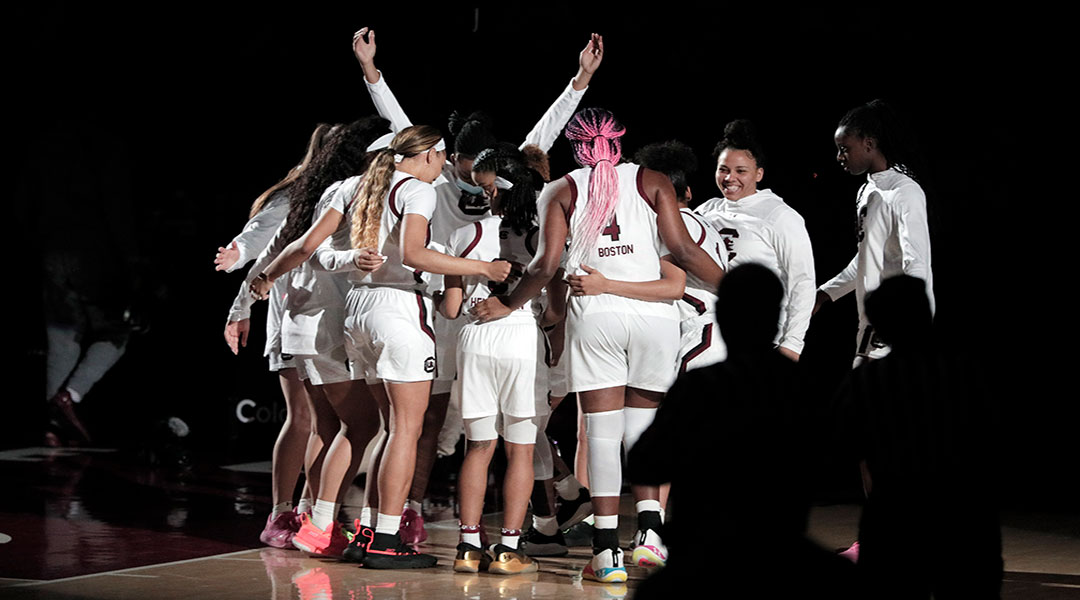 South Carolina is 9-1 at home this season following the win over Kentucky. Photo courtesy of Dwayne McLemore / The State

South Carolina women’s basketball was coming off its first SEC loss in almost two years after falling to Tennessee when Kentucky came to town for Senior Day on Sunday. The then-No. 2 Gamecocks (18-1, 13-1 SEC) ran away from the then-No. 17 Wildcats (15-6, 8-5 SEC) in the second half to take a 76-55 win after just a four point lead at the break.

With just two games left in the regular season, here are some takeaways with March right around the corner.

South Carolina came into the day 12th in the SEC and 259th in the NCAA in free throw percentage at 65.5%. On Sunday, they were slightly better making 16-24 (67%), and they made all six in the second half. However, the Gamecocks could’ve had much more breathing room in the opening half as they were just 10-18.

It isn’t just free throws that the Gamecocks have struggled with this season. Making layups has been a hassle for the Gamecocks as well. The team was 14-33 Sunday afternoon. It is something the team works on in practice, most recently on Friday.

“[We have] a drill where we’re making layups through contact,” sophomore guard Zia Cooke said. “I think that is our problem right now. I’m pretty sure coach is definitely going to put some more layup drills in practice.”

Against UConn, Paige Buckers was held to under 10 points in the first half. Sunday against the Wildcats, it took Rhyne Howard 17 minutes to find her first points, and she finished with just 12, well below her season average of 20.

Good players will always find a way to get involved and make an impact, but having the ability to neutralize the opponents’ top player is always good. Senior guard Lele Grisset, who defended Howard for a majority of the game, said they just had to “lock in on what’s important” and that Howard was “the most important thing on the court.”

Laeticia Amihere is a difference maker

The recipe for most teams to have a chance against South Carolina is to shut down sophomore forward Aliyah Boston. Kentucky followed that strategy  as Boston was held to just four points on 1-4 shooting. The issue for Kentucky was that the other sophomore forward in Amihere stepped up and recorded her third double-double of the season.

“This is the type of performance that we feel will help us in the long run and help her,” Gamecock head coach Dawn Staley said. “…Defensively, she was where we needed her to be for the most part. Offensively, she took her time and made some layups.”

The Gamecocks have two regular season matchups left. Ole Miss on Thursday before a potential SEC Regular Season Championship title game against newly rankedNo. 3 Texas A&M on Feb. 28. South Carolina dropped to No. 5 in the new AP poll released Monday afternoon. When the Gamecocks face the Aggies, South Carolina will be the lower ranked team for the first time since November 2019.

Staley isn’t letting her team think ahead to next week though.

“We just talk about Ole Miss,” Staley said. “Ole Miss is a pretty good basketball team. [My] team is one that stays in the moment, but I do know that they are very aware of what’s at stake.” 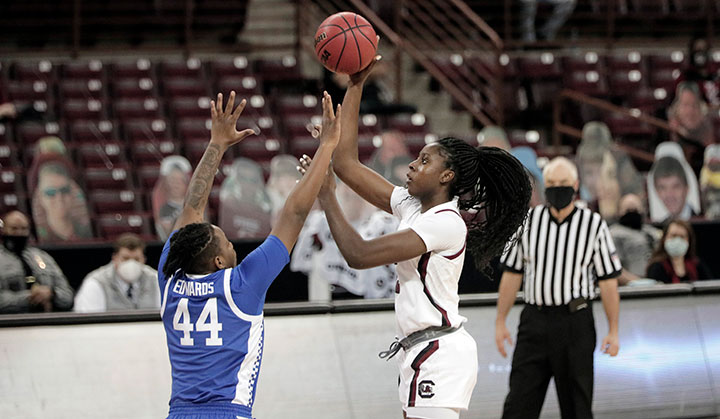 Sophomore forward Laeticia Amihere registered her third double-double of the season against the Wildcats on Sunday. Photo courtesy Dwayne McLemore / The State 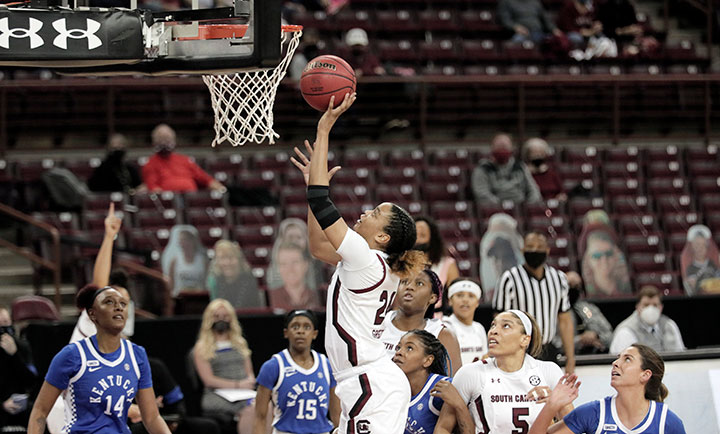 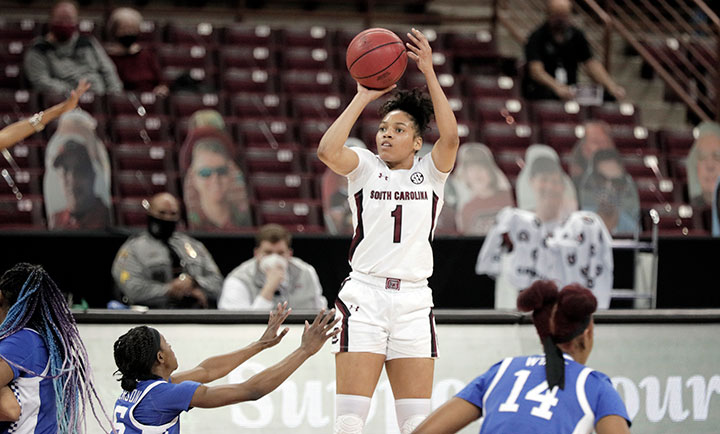