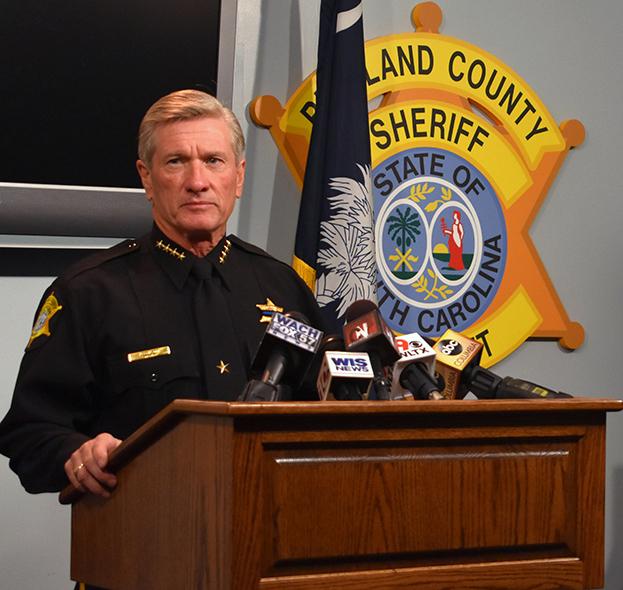 Richland County Sheriff Leon Lott announced the arrests of three suspects in connection with the murder of 58-year-old Ronald Bonnette, an innocent bystander caught in the cross-fire between two rival gangs on Oct. 26.

Deputies responding to a call Oct. 26 around 7 p.m. in the 800 block of Beatty Road discovered the body of Bonnette, who had been caught in the crossfire of two rival gangs as he was taking out his trash.

“This is a community problem that exists within the Midlands,” Lott said. “Young people with guns that just do not care.”

This shooting follows another from earlier this year when 23-year-old Antheny McDowell and his 1-year-old son Tyreen D. McDowell were found dead in their home near Beatty Road.

Sheriff Lott has expressed his frustration with the loss of innocent lives in Richland County. He also says that there was the potential for even more lives to be lost during this incident.

“In this incident we had at least 25 rounds fired inside an apartment complex, three cars and two occupied apartments that bullets went into,” Lott said. “It could have been worse because the people shooting just do not care where the bullets went and who was injured.”

The three suspects are in custody at the Alvin S. Glenn Detention Center and are awaiting trial. Each suspect has been charged with murder and other violent crimes relating to the incident.

Three suspects, Elijah Gilmore, 19, Messiah Cornish, 18, and DyQuan King, 17,  were charged with murder after a gang-related gun fight erupted in the 800 block of Beatty Road. All three suspects are in custody at the Alvin S. Glenn Detention Center.