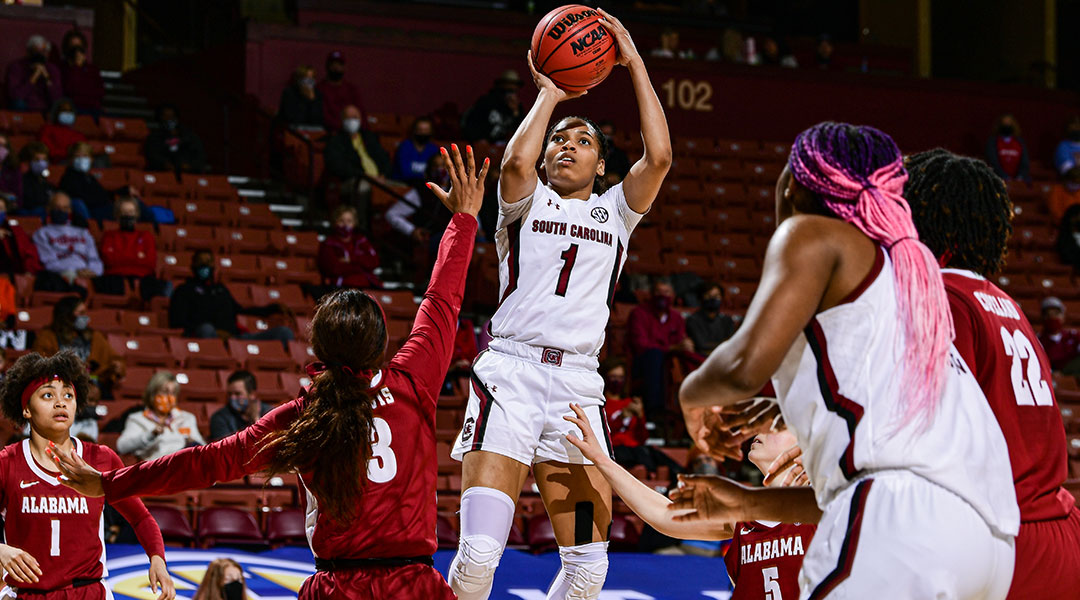 Junior guard Zia Cooke pulls up for a jump shot against Alabama last season as junior center Aliyah Boston boxes out preparing for a rebound. Both Cooke and Boston were named to the preseason All-SEC first team. Photos courtesy of South Carolina Athletics

Boston enters her junior season with an extensive list of accolades. In both of her seasons so far as a Gamecock, she has won the Lisa Leslie Center of the Year award  and made the SEC All-Defensive team. She won SEC Defensive Player of the Year her freshman season and shared the award with Georgia’s Que Morrison in 2020.

Head coach Dawn Staley believes she deserves all the recognition she has gotten and more. She said when the best player in the country is being discussed, Boston “needs to be in that same breath because she puts it on display.”

Boston averaged a double-double last season, scoring 13.7 points per game while hauling in an average of 11.5 rebounds. She also recorded 81 total blocks and 36 steals throughout the year.

Staley believes she is even better now heading into her junior season. She said while she has always had the ability to contribute in all aspects of the game, “she does it all now at a more efficient clip.”

When asked if there was a better college player with her size than Boston, Staley was adamant the answer was no. “We don’t want any arguments,” she said, making it clear she believes her center is the best in the country.

Junior Zia Cooke was also selected for the preseason All-SEC first team. She averaged 15.9 points in 2020 while shooting 39 percent from the field and from three.

Her shooting prowess alone has made her a valuable weapon for the Gamecock backcourt alongside senior guard Destanni Henderson.

Henderson contributes in a variety of ways, finishing last season with an average of 12.2 points, 5.1 assists and 4.7 rebounds. Henderson also shoots the ball very consistently, over 40% from the field and from the three-point line.

This trio of veteran Gamecocks looks to lead this team back to the Final Four, where they fell to Stanford 66-65 one game away from the championship. “We’ve got there and we know what it’s like,” Cooke said in a preseason interview. The eam is “very hungry for it.”

The team finished the last year with a record of 26-5 overall, going 14-2 in SEC play. The two conference losses both came against ranked opponents, #21 Tennessee and #3 Texas A&M.

They protected home court extremely well throughout the year, losing only once at home to NC State, which was ranked eighth at the time but finished the year ranked sixth.

While last year’s season was successful in many aspects, depth was an issue at times which forced the Gamecocks to rely on production from their best players every single night.

While the Gamecocks will still have to rely heavily on Boston, Cooke and Henderson, the Gamecocks brought in a talented recruiting class that was rated best in the country. Staley said that this season, “there won’t be an issue with depth,” and is confident in the team’s new additions.

One of those additions is Sania Feagin out of Forest Park High School in Ellenwood, Georgia. She was the top-ranked forward and fourth overall player in the country in 2021.

She said she sees a lot of similarities between her top-ranked recruiting class and the highly touted 2019 class, which included both Boston and Cooke. She said in a preseason interview that  her class is “basically a younger version of them,” so their experience will be valuable for her classes development.

Cooke echoed this sentiment, saying “We’ve been in their shoes before so we know how it is.”

The experience Cooke, Boston, Henderson and the other veterans of this team bring could prove invaluable in the quickly approaching 2021 season. The Gamecocks begin play on the road with an opportunity for revenge against fifth-ranked NC State on Nov. 9. 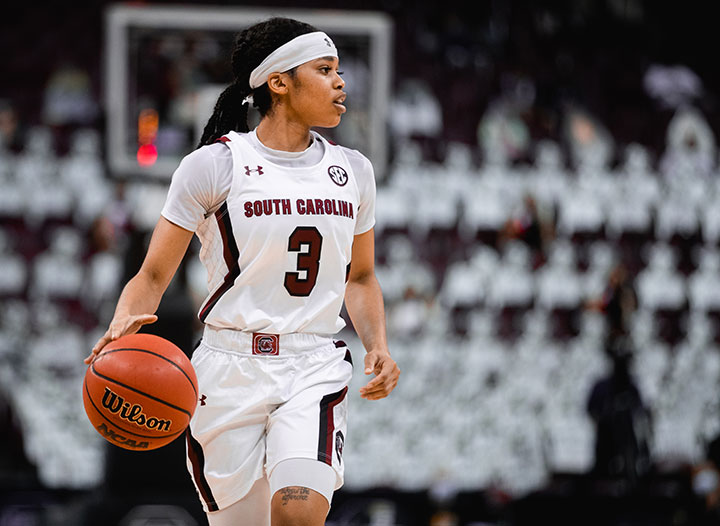 Senior point guard Destanni Henderson was named to the preseason All-SEC second team. Henderson was a major threat from three, shooting 43 percent from behind the arc. 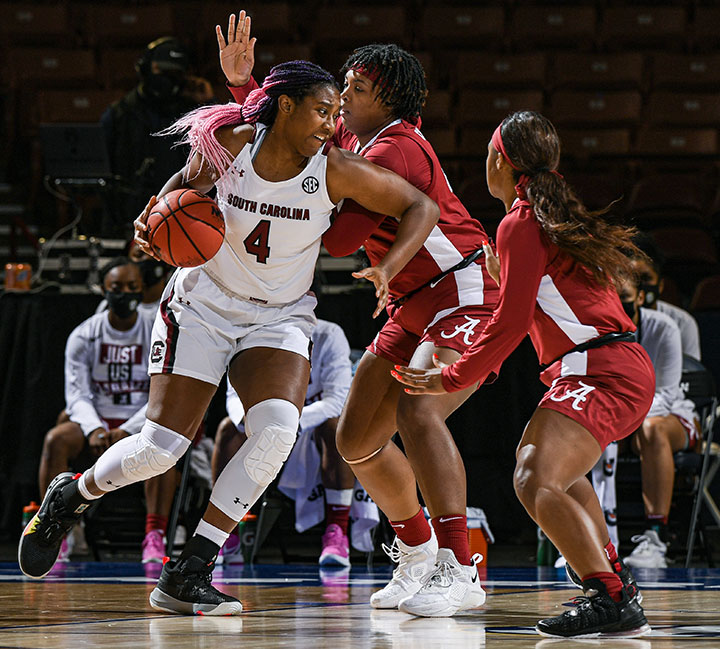 Junior center Aliyah Boston has won the Lisa Leslie Center of the Year award in both her freshman and sophomore seasons at South Carolina. 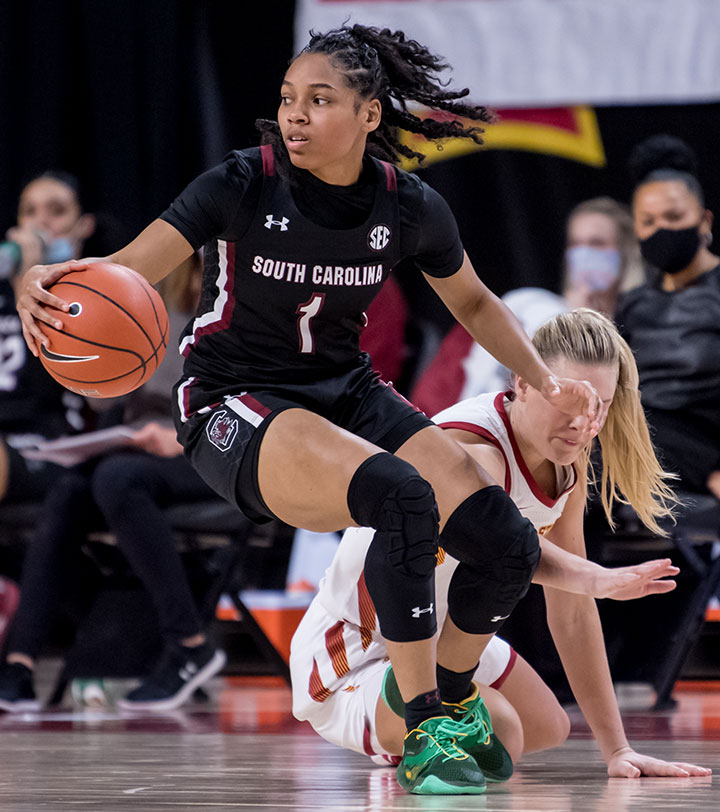 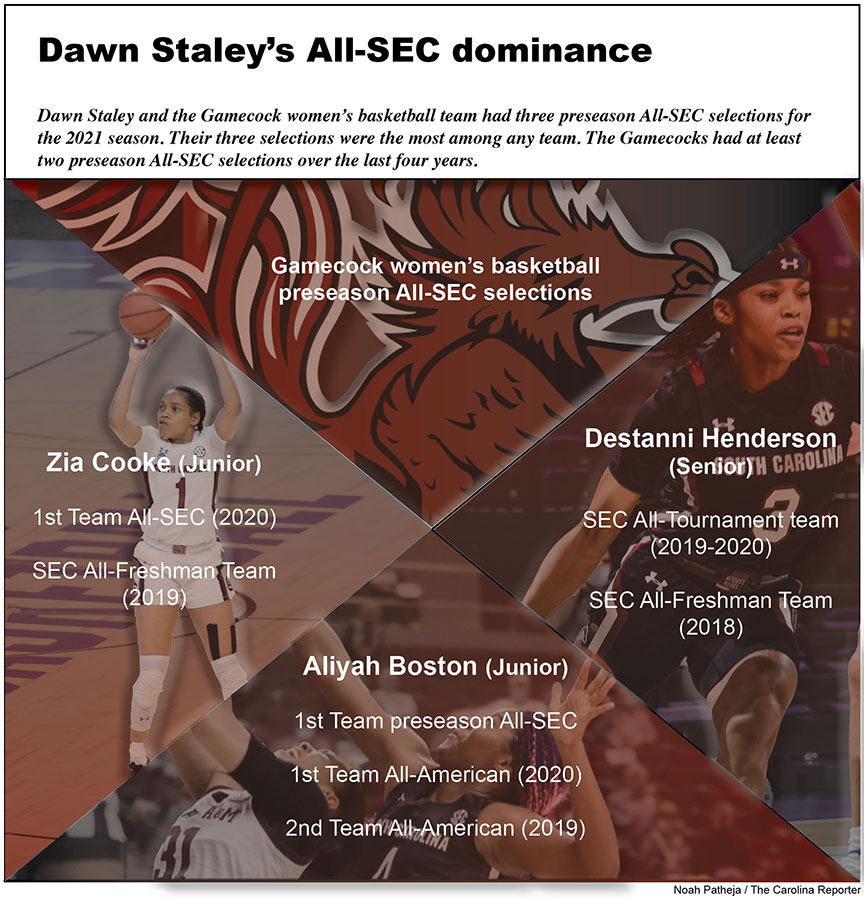