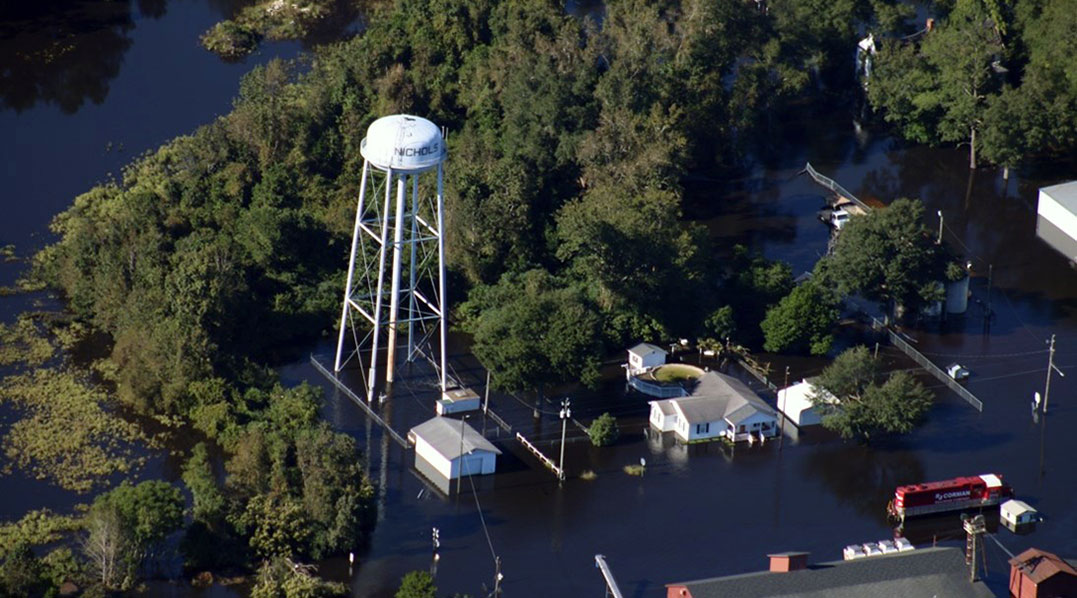 The town of Nichols in Marion County, South Carolina, was washed out by two hurricanes in three years. Photo credit: Town of Nichols

NICHOLS, S.C. —​ In this Pee Dee town that sits at the confluence of two rivers, leaders are working to rebuild and restore hope in an area that has been flooded out by two hurricanes in a span of three years.

Nichols, in Marion County, South Carolina, is a small, Mayberry-esque town of mostly older residents. It is situated between the Lumber and Little Pee Dee Rivers. Farmland, dirt roads and a couple of two-lane highways surround the town.

Hurricane Matthew devastated the town with 17 inches of rain in October 2016 when the storm stalled over eastern South Carolina. Residents and small business owners were in the process of rebuilding when Hurricane Florence washed out the town again in September 2018.

Main Street in Nichols is lined with abandoned buildings, which were filled with mold and visible water lines after the floodwaters receded back into the rivers.

“We had six to 12 more inches of rain in Hurricane Florence than we did in Matthew,” Nichols Mayor Lawson Battle said. “It was crazy that I could stand outside and watch fish swimming by.”

Hurricane Matthew’s floodwaters damaged all but four homes in town, all six of the town’s churches and over 20 businesses. Battle said 12 businesses and 60% of residents were rebuilding when Florence hit.

Two major floods like these are not normal in Nichols. Town leaders and residents had to figure out how geography contributed to the two floods and prepare for the possibility of another devastating flood or hurricane.

Town leaders began applying for over $108 million in grant funding. This includes the potential to revitalize its downtown, elevate more homes, implement a modified levee around the town, relocate homes in flood-prone areas and repair construction of water flow that contributed to additional flooding.

Nichols Town Clerk Sandee Rogers said the decision timeline for these grants and projects is unknown, though it could take two or three years.

Town leaders, along with Sen. Tim Scott, R-S.C., are working with Pee Dee Regional Council of Governments, based out of Florence, South Carolina. The council’s main role is to help Nichols develop a comprehensive plan to revitalize and rebrand, as well as find sources of revenue, including some grants, to keep the town afloat.

Nichols secured over $185,000 in Hazard Mitigation Grant Program funding from the Federal Emergency Management Agency to contract with hydrologists from the consulting firm Woolpert in March 2019. The $185,000 went towards a Phase 1 study, in which hydrologists studied the rivers and determined what led to the severity of the flooding, as well as what the town could do to prevent future flooding. The first phase of the study has been completed and is awaiting a final report.

Woolpert hydrologists said flooding from the Lumber River caused the 2016 flood. In 2018, floodwaters poured into town from both the Lumber and Little Pee Dee Rivers. The flooding combined at the base of the Lumber River watershed. Unfortunately, Nichols is near the center of this area of the river basin.

The town is waiting to make its next move to bring itself back to life, but the final report on Phase 1 will determine the next steps.

Over $1.3 million in funding for Phase 2 of the Woolpert hydrology study has been awarded, but the town has not received it yet because it is contingent on Phase 1.

“If suggested projects from Phase 1 are approved, the Phase 2 funds will be released and applied to approved projects,” Michaela Hufford, Nichols disaster recovery coordinator, said.

Phase 2 consists of suggested projects from Woolpert, such as a flood levee around the town, partial dams, raising one of the town’s bridges to allow for more water flow and even relocating Nichols. Relocating the town would cost $8 million, Battle said.

Funding has proven to be as significant a storm to weather as the two hurricanes.

“The $1.3 million in Phase 2 funding is not going to entirely fix our flooding issues, and it certainly will not pay for many of the suggested projects,” Battle said. “I wish I was kidding, but the last thing the hydrologists told us was to make sure we pay flood insurance.”

As a result, town leaders started applying for whatever grants they could find. Since Hurricane Matthew, Nichols has been awarded over $75,000 to repair damaged sidewalks, over $287,000 in a grant to elevate four homes and over $290,000 to purchase fire equipment, a rescue boat and swift water rescue gear.

“This money, including the hydrology study funding, is like a drop in a bucket for what we need,” Rogers said. “Our goal is to prevent the severity of the flooding, and we simply just need other funds to do that.”

If Nichols can “turn the corner” from its past and secure more funding, nothing can stop the town from growing, Rogers said.

“When you have two gorgeous rivers for recreation and are 45 minutes from putting your toes in the sand at the beach, we are in a position for growth,” Rogers said. “We also have a railroad and access to Interstate 95. People are now finding out this is a great little place to live.”

Battle said he worries the town will cease to exist if enough funding is not secured, but he is thankful no residents’ lives were lost in either flood.

He is also excited about the town gaining a diverse group of residents from other states. A portion of Nichols residents decided not to return after both floods, which prompted them to put their homes up for sale at lower prices.

“We have had a couple of new businesses come in, and we’ve had people from up north buy some residents’ homes because they realize how nice the area is,” Battle said. “This is a place where everybody works together and looks out for each other.”

Read the third story in this three-part series: 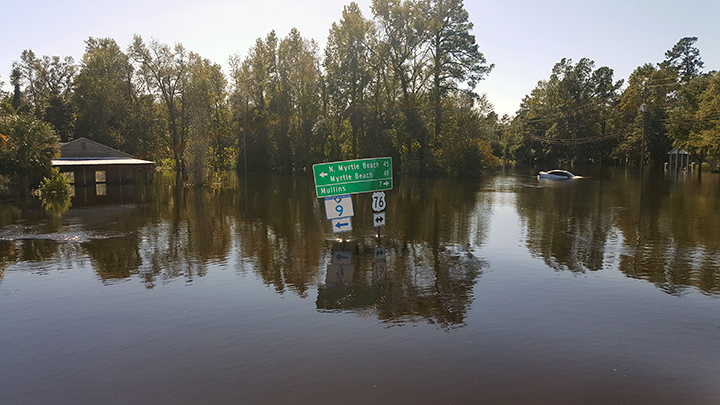 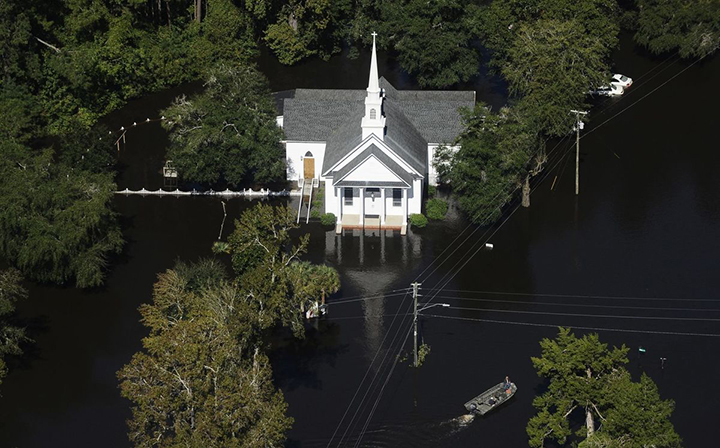 Hurricanes Matthew and Florence damaged all six area churches in Nichols. Four of the six churches have rebuilt and are currently open. Photo credit: Town of Nichols 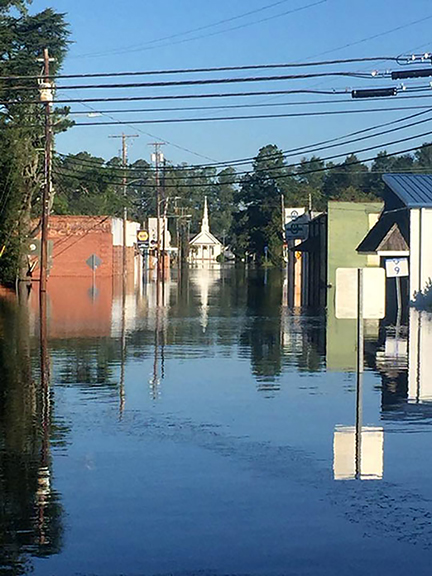 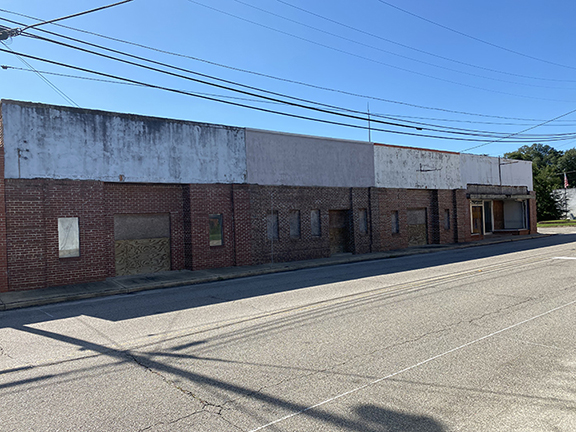 The two floods left Nichols’ Main Street lined with abandoned buildings that were once filled with mold after flood waters receded. The town has applied for grants to help fund a revitalization project of its downtown area. 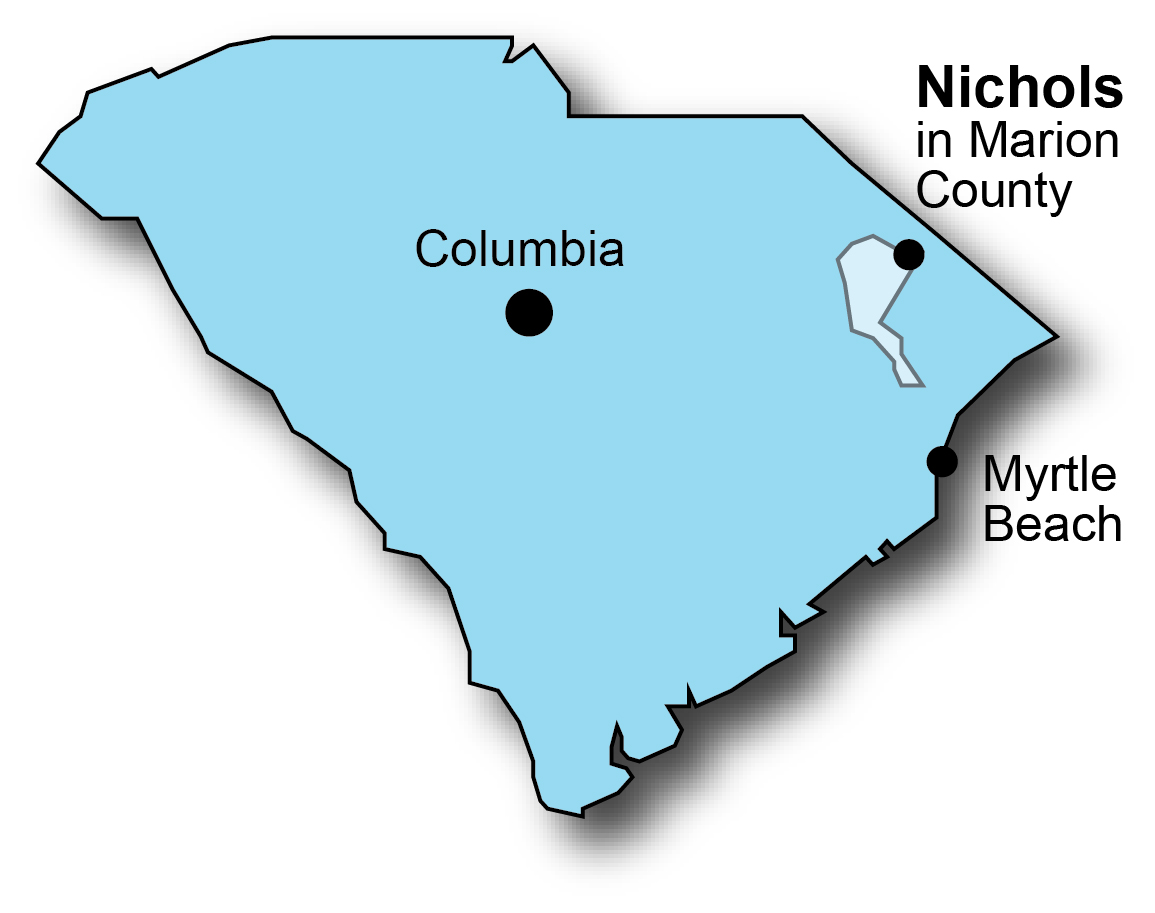 The monkeypox virus has received a lot of attention on social media. The vaccine is available in the Columbia area — but you might not be able to get it. @BozardCaleb has more: https://carolinanewsandreporter.cic.sc.edu/monkeypox-vaccine-available-in-columbia-but-only-offered-to-high-risk-groups/

Prisma Health will invest $5 million in a pilot nursing recruitment program at five S.C. universities or colleges - including UofSC

The Iranian students are gathering at the S.C. Statehouse this evening in support of Iranian women's rights. Read more: https://carolinanewsandreporter.cic.sc.edu/uscs-iranian-student-association-to-protest-at-sc-state-house/