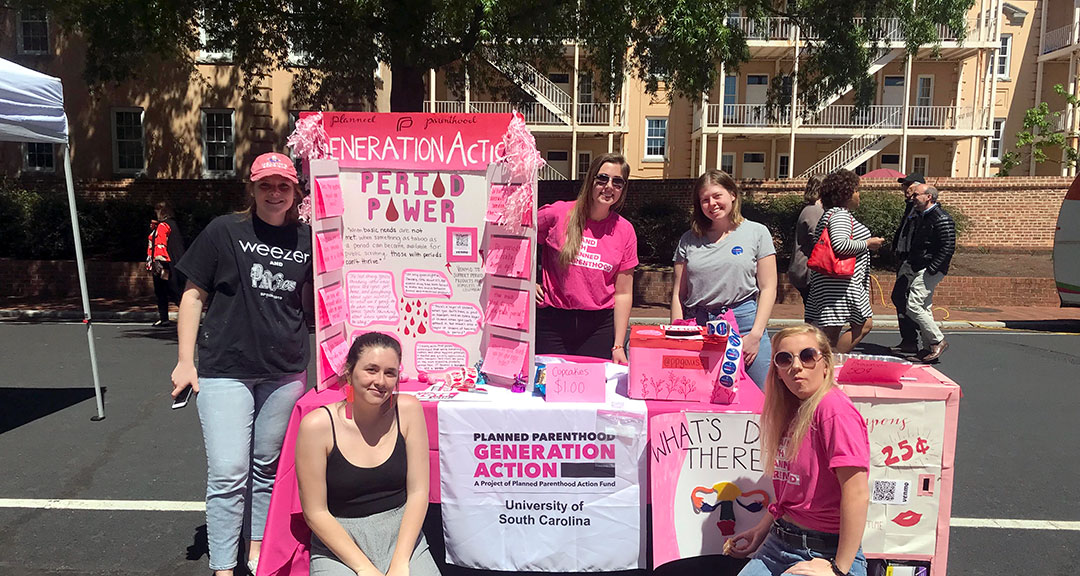 Charlotte Hoff was searching for the parking lot of Planned Parenthood one recent weekday when she was met with was a group of anti-abortion protestors shouting and holding signs giving false directions to the building.

“When I originally had that experience, when I was driving away my first thought was I was going to make a TikTok to see if anyone else has had this experience or anything like that,” Hoff, a junior advertising major at University of South Carolina, said.

Within a month of Hoff posting her experience at Middleburg Medical Park on TikTok, a social media app dominated by Gen Z users, the video went viral within the Columbia area. It appeared on the “For You” page, a place where popular videos in the geographic area and videos with similar content to a users likes show up with over 85,000 views and 23,500 likes.

“It started with women all from Columbia, South Carolina, or mildly adjacent, like Florence or Spartanburg or Clemson even,” Hoff said. “My TikTok was on the exact “For You” page of pro-choice, very accepting wonderful Columbia women. It was awesome and such a surprise.”

Many women in the comment section expressed similar experiences to Hoff and discussing what their plan of action was next.

“I was totally overwhelmed and I had no idea what to do, but it was clear that there was so many people that had the same reaction to the events that I did,” Hoff explained. “I was, like, there is obviously momentum here and if I don’t do anything about it it is just going to fall apart, and I didn’t really know what other platform to use, so I went with Facebook.”

The private group created by Hoff has 188 members on Facebook sharing an interest in helping Planned Parenthood in South Carolina. One of the members, Sloan Wilson, a senior gender and women studies student at the University of South Carolina, shared her previous experience as an intern at Planned Parenthood after initially hearing about the Facebook group from being tagged in the TikTok.

“I was really glad to see it and she was talking about it in her TikTok like we need to do something. And when I saw that I commented that we already have a program in place but I feel like based on that TikTok, people don’t know about it,” Wilson said.

Wilson showed her former supervisor, Allison Terracio, who helps connect the South Atlantic Region of Planned Parenthood by doing electoral work . Terracio then shared her information to the group to help start the formalized process of volunteering as a clinic escort and greeter, which includes a background check and references.

“It is folks standing right outside the health center door and we act as a support person, kind of as a buffer, as soon as they go in,” Terracio said. “Anything to take their mind off of the protestors until they can get inside and the healthcare staff can start to see them.”

Because of Hoff’s video, Terracio said the number of volunteers interested surged.

“In the matter of a few weeks, I have had a year’s worth of people reach out to me,” Terracio said. “It’s been great. I’ve really enjoyed making connections with these folks and learning more about them and why they want to be volunteers, and even more looking forward to having them as volunteers and getting to know them that way.”

Emily Reich, a 24-year-old working as a commission admin in the S.C. Supreme Court, immediately wanted to get involved after seeing Hoff’s video come across her “For You” page.

This group is giving Reich the opportunity to dive deeper into the community.

“I just think naturally that’s just because of the demographics of TikTok but it is going to be nice to meet other community members that are like minded because that is always something that I am seeking out and then I feel like that I am often lacking,” Reich said.

Hoff is ready to start volunteering with Planned Parenthood and with her new community.

“It is good to volunteer if you want to be a shield and if you have the ability and time to lend to a health care organization that needs help protecting people from anger in an already difficult moment,” Wilson said. “It is just the right thing to do if people have the time and ability.” 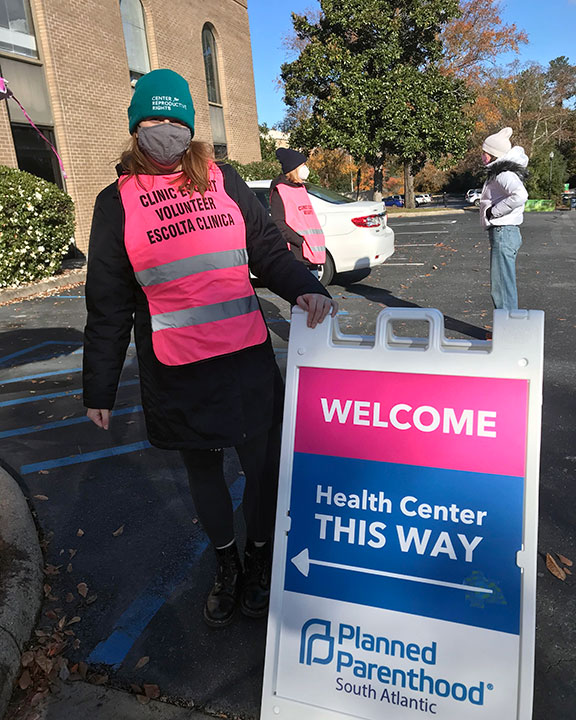 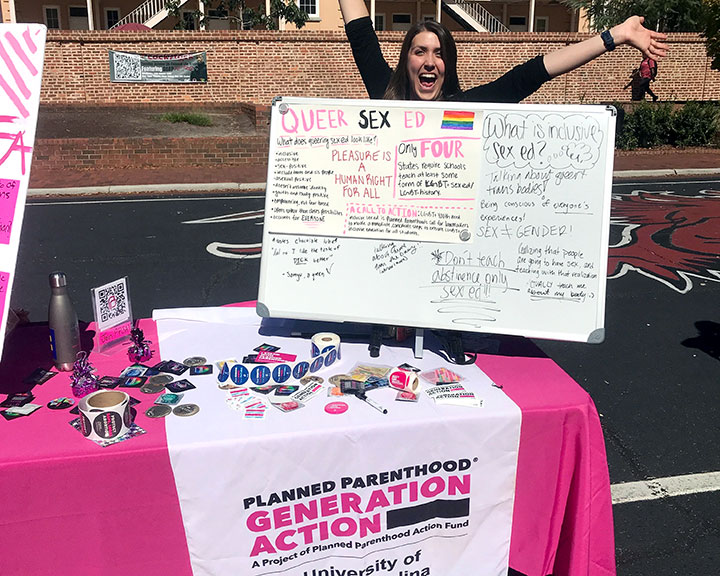 UofSC has a Student Generation Action Chapter that goes to events on campus to educate students. Photo credit: Sloan Wilson. 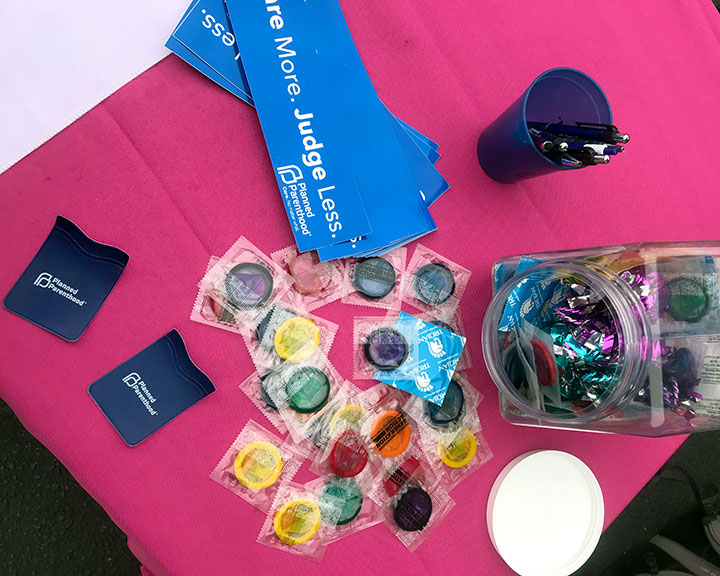 Condoms and other sexual health items are available to students on Greene Street from the Student Generation Action Chapter. Photo credit: Sloan Wilson. 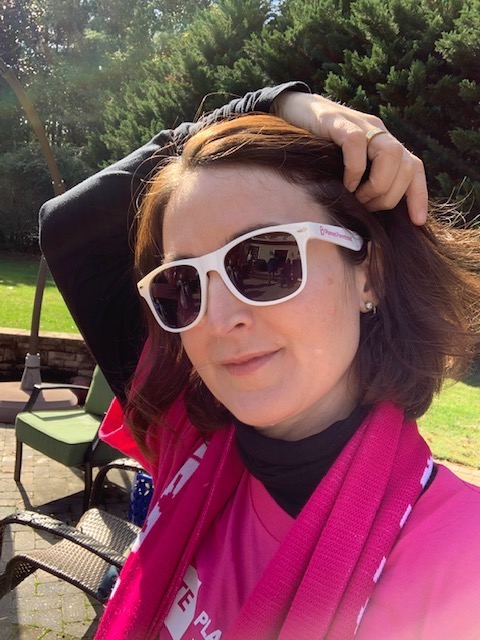