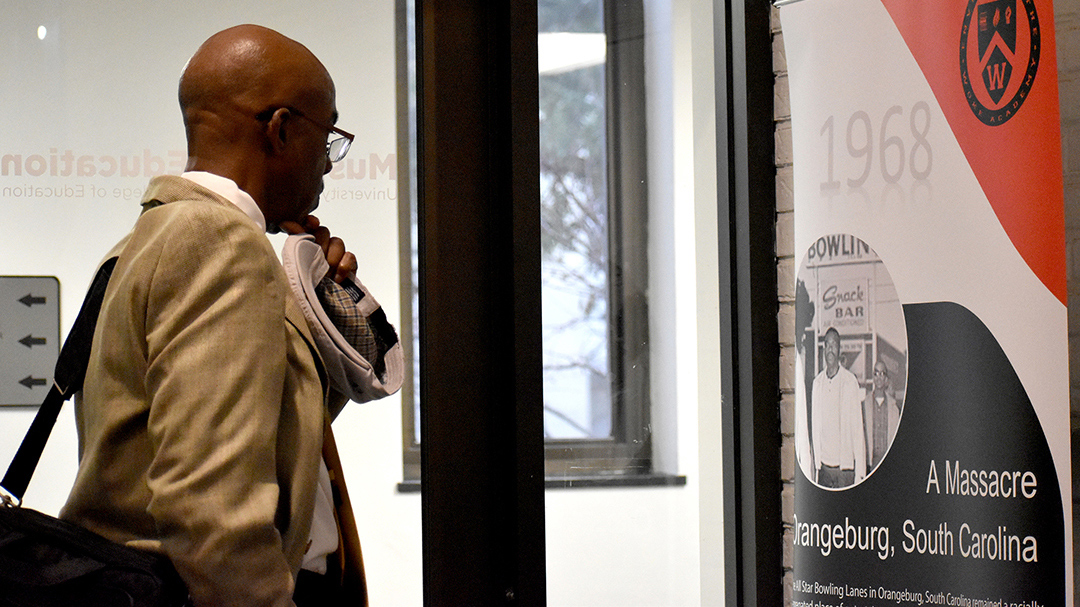 Thomas Kennerly, survivor of the Orangeburg Massacre in 1968, was shot three times.

The University of South Carolina’s College of Education opened its interactive “Remember: 1968” exhibit Thursday, showcasing student activism on a national and global scale during that turbulent year of the 1960s decade.

On opening night, the exhibition focused on one of the most violent but not widely known events of 1968, which came to be known as the Orangeburg Massacre. Three students were killed and 27 wounded at South Carolina State University, a historically black institution, in the wake of student protests over integration of a local bowling alley.

“That memory still holds very dearly to me because it means in essence that we could be killed, and we could be injured on our campus when we weren’t doing anything at all to cause any problems or destruction,” said Thomas Kennerly, who was a student at South Carolina State and Orangeburg Massacre survivor.

The Orangeburg Massacre occurred on Feb. 8, 1968 after days of protests aimed at forcing Harry Floyd, the owner of All-Star Triangle bowling alley, to integrate. Floyd’s business was the only bowling alley in Orangeburg. On the night of the confrontation, students built a bonfire and faced off with National Guard and local Highway Patrol officers who had been called in by the governor.

“After two days of escalating tension, a fire truck was called to douse a bonfire lit by students on a street in front of the campus,” recounted Jack Bass, who covered the massacre as a reporter and later wrote a book.

“State troopers—all of them white, with little training in crowd control—moved to protect the firemen. As more than 100 students retreated to the campus interior, a tossed banister rail struck one trooper in the face. He fell to the ground bleeding. Five minutes later, almost 70 law enforcement officers lined the edge of the campus. They were armed with carbines, pistols and riot guns—short-barreled shotguns that by dictionary definition are used ‘to disperse rioters rather than to inflict serious injury or death.’ But theirs were loaded with lethal buckshot, which hunters use to kill deer. Each shell contained 9 to 12 pellets the size of a .32 caliber pistol slug.”

The gunfire lasted eight-to-15 seconds, killing three and injuring 27 others.

“Why was there a need for tanks on a college campus?” Kennerly said. “Why was it necessary for them to use such deadly force?”

Kennerly said he believes students did not intentionally strike the officer with the banister, triggering the volley of gunfire into the crowd of running students.

“Now I don’t believe that happened, but still we have to understand that if they wanted to use that as a mechanism to justify what they did then their attitude was ‘I felt like I was threatened, and I have to protect myself.’ That’s unfortunate because we didn’t have any weapons,” Kennerly said.

Amidst the chaos of that night, many students attempted to run, and even crawl, to safety as bullets ricocheted from body to body. Kennerly heard several moans and groans from injured students.

“Yeah, all hell did break loose that night,” Kennerly said as he showed newspaper headlines from the coverage.

“Some of the individuals that I spoke to said that they heard whistles before the shots… I didn’t hear anything myself,” Kennerly said. “I heard some of the students laughing because they couldn’t believe that this was happening.”

Kennerly was shot three times as he was trying to crawl to safety away from the gunfire. He was shot in the left shoulder, in the right hip and the left big toe. Kennerly later found himself carrying a fellow student, Robert Davis, who was hit with a bullet that lodged six to seven inches from his spine, nearly paralyzing him. Davis was a 6-foot, 260-pound football player, Kennerly was 6’2 and 190 pounds.

“When excitement and emotions come into play you’d be amazed at how much strength you can amass,” Kennerly said.

He recalled seeing Samuel “Sammy” Hammond, a SCSU student who died that night.

“Do you think I’m gon’ make it?” Kennerly heard Hammond say as he laid on the floor of the infirmary fighting for his life. Hammond was shot in the back.

Kennerly and many others made their way to the Orangeburg Regional Hospital, which also remained segregated. But the campus infirmary was “woefully inadequate” in dealing with the issues seen that night.

Along with Hammond, two others died that night. Delano Middleton was a high school student who was waiting for his mother to get off work at the university after leaving basketball practice. He had received a full football scholarship to SCSU. Middleton was supposed to walk his mother home but was curious about the protests. He was shot seven times, one bullet piercing his heart, that night. Henry Smith was shot three times, once in the neck.

Another lesser known fatality occurred following the massacre. Louise Kelly Cawley was beaten during the protests by police officers. She was pregnant at the time and miscarried a week later.

After surviving the traumatic massacre, Kennerly was drafted to fight in the Vietnam war. He then left the battlefield to testify in the trial of nine highway state patrolmen who were later acquitted of all charges. The officers on trial had maintained that they heard gunshots coming from the crowd of assembled students.

“We had an all-white jury and their attitude was that ‘we’re gonna protect our own’ and that’s sad,” Kennerly said.

The Orangeburg Massacre was overshadowed by the protests that erupted at Kent State University two years later, where four students were killed by members of the Ohio National Guard. The horror that Kennerly endured at home and abroad still lingers as he continues to heal. As he closed out his speech, he left the audience with a few words of advice.

“Stand your ground. When you know you’re right, don’t back down,” Kennerly said, noting that some attitudes haven’t changed despite the passage of 51 years.

Kennerly is retired but tutors first through third grade students in reading at a local elementary school. His speech was the first of several installations of the “Remember: 1968” exhibit on USC’s campus, which ends in May. 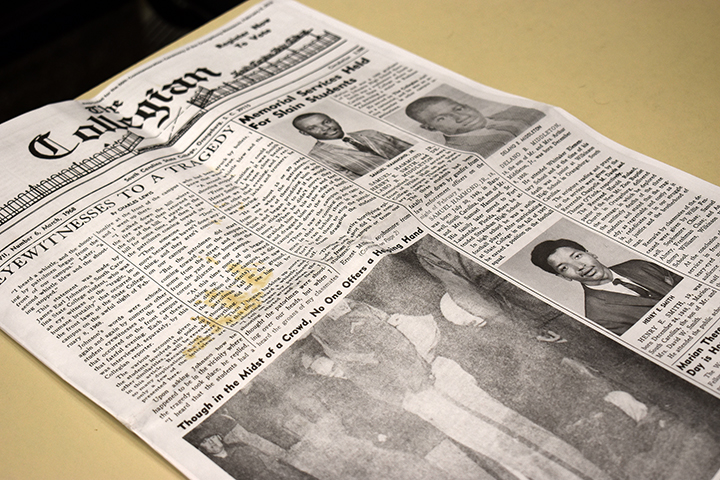 The Collegian, South Carolina State University’s student newspaper, reprinted the original stories written about the Orangeburg Massacre to commemorate the 50th anniversary of the deadly protest. 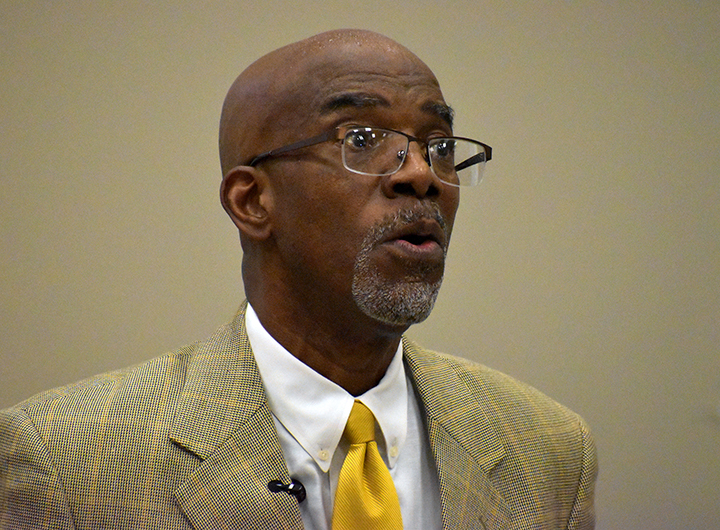 “Stand your ground. When you know you’re right, don’t back down,” Thomas Kennerly told those attending a new exhibition on 1968.

Kennerly spoke at the University of South Carolina’s School of Education at the opening of the “Remember: 1968” exhibit. He spoke with students and others in attendance about student activism in 1968 and how it compares to student activism today. 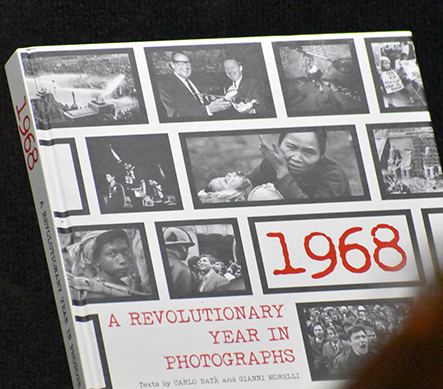 This book, as a part of the exhibit, illustrates how 1968 was a turbulent year. Many students protested injustices they saw. 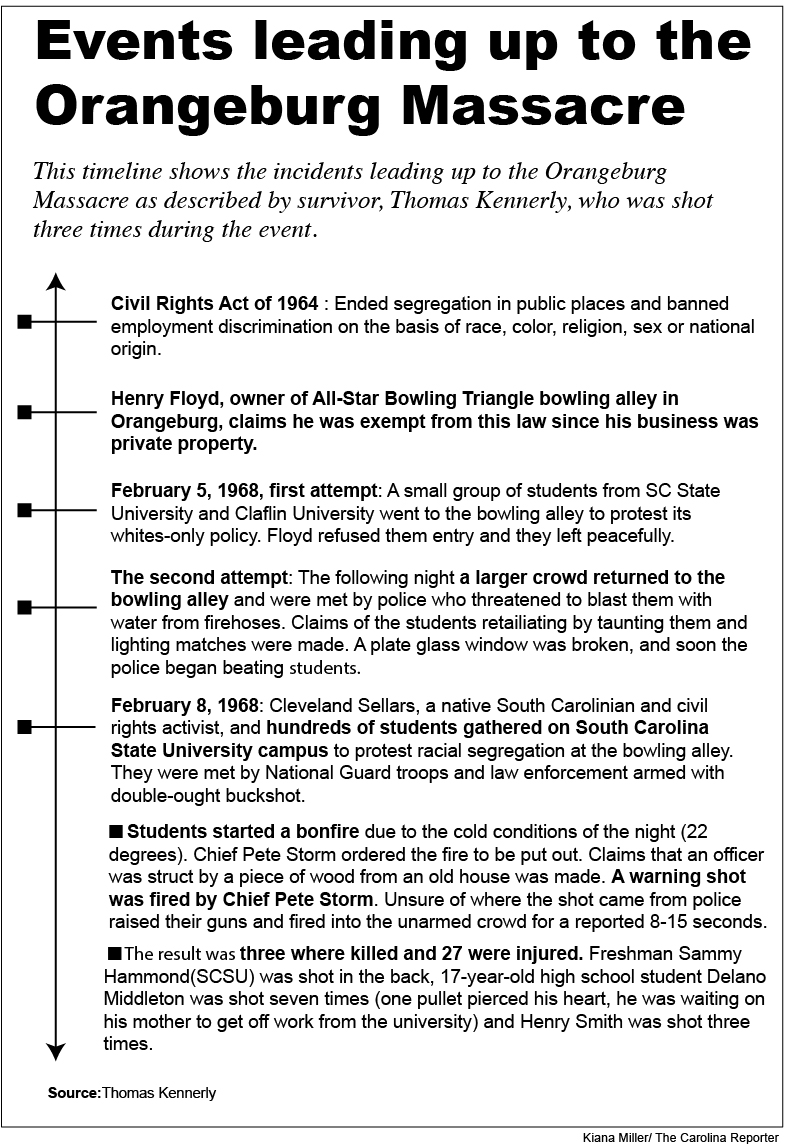