“An essential adventure:” Two S.C. women race to the head of the state 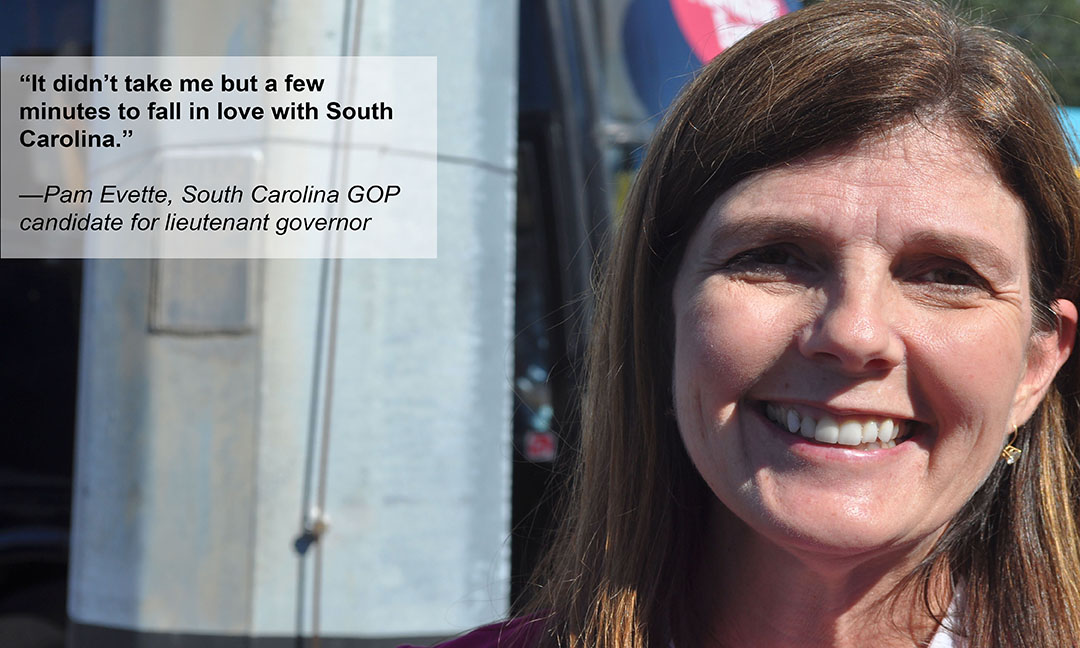 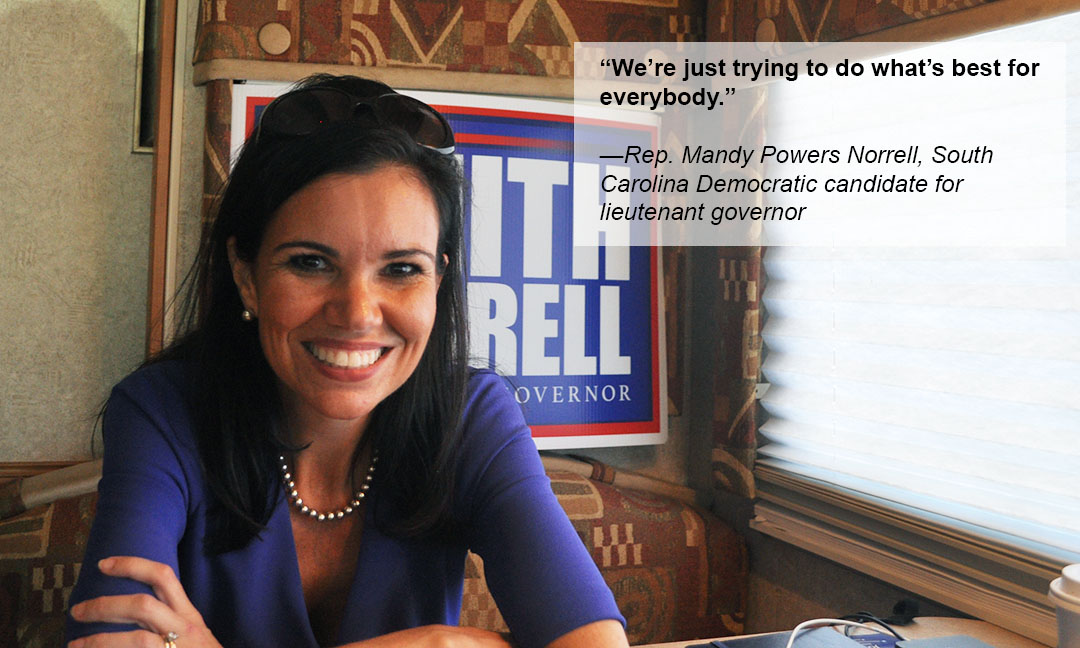 “American Woman” by Lenny Kravitz pulsed loud and clear through a crowded Lizard’s Thicket restaurant dining room in Cayce on Wednesday, while Pam Evette shook hands with almost everyone there.

Evette is South Carolina’s GOP candidate for lieutenant governor. Sporting a pink suit and walking behind a smiling Gov. Henry McMaster, she was gearing up for one last bus tour of the state before the election on Tuesday.

About 40 minutes away, at a fish fry in Winnsboro, there was no Lenny Kravitz. Instead people heard the Fairfield Central High School marching band practice booming from across the street as Democrats mingled with McMaster’s opponent, Rep. James Smith.

Smith, a Richland Democrat with a long record in the S.C. House,  flashed his smile just as McMaster, a State House veteran seeking his first full term as governor, had. But the biggest smile in the parking lot was that of Smith’s running mate: Rep. Mandy Powers Norrell.

“This [campaign] has been probably the greatest adventure of my life,” Norrell, 45, said.

Evette, an Upstate business owner, and Norrell, an attorney, have different backgrounds and different policy-making ideas, but they’re making the same history.

But many voters will make it to Election Day without knowing too much about their potential second-in-command.

McMaster chose Evette to run with him earlier this year after mutual friends recommended her, he said.

Though Evette has never held public office, McMaster and her supporters champion her as a savvy businesswoman who can approach legislative issues a similar way.

“This country is nothing but a business. We’ve got a businessperson running it, and I think he’s doing a good job,” Columbia resident and McMaster/Evette supporter Michael Hallman said Wednesday.

Evette and her family moved from Ohio to Travelers Rest near Greenville 13 years ago.  She and her husband David Evette then founded Quality Business Solutions, a payroll and human resources benefits company. Pam Evette is the president and CEO.

“When I started my business, we started it from the ground. We ran it very responsibly just like we run our home,” she said Wednesday.

Norrell was a bankruptcy attorney at Norrell and Powers Norrell, LLC, the practice she and her husband started in her hometown of Lancaster.

She went on to be Lancaster’s city attorney and later the town attorney for Kershaw. She was elected to the House of Representatives in 2012.

Finding a candidate who relates to voters

In their only joint debate appearance on Oct. 29, Evette and Norrell sparred over issues like healthcare and economic development.

Continuing the push from many South Carolina Republicans, Evette plans to work alongside McMaster to cut income taxes.

Norrell said a top priority on her ticket is the expansion of Medicaid. She argued on Wednesday that continuing to reject those federal funds would be “inhumane.”

Evette’s supporters feel that her business-like approach to things can bring more jobs to low-income parts of the state, helping those areas economically. During the debate, Norrell’s response to this was that education should improve first.

Both candidates see their business and leadership skills as essential for the job they want, but they also emphasize building meaningful relationships.

The differences between the candidates for both governor and lt. governor are stark both personally and politically, but the commonalities are there.

“Just like in business, you have to make relationships with people in the legislature … and that’s how you get things done,” Evette said.

McMaster has said Evette is someone who can “relate to everybody,” and while this only got a modest chuckle out of his running mate, she had to agree.

“My husband will tell you, I got it honestly. I’ve never met a stranger,” the GOP candidate said. “Meeting people, talking to people … It’s what I enjoy the most.”

Like Evette, Norrell has enjoyed meeting and getting to know people above all else.

“My favorite part … is when we’re going to small towns and communities that are not hubs of activity otherwise. It’s so much fun connecting with people,” Norrell said.

Whether Evette or Norrell is elected next week, the lieutenant governor will juggle the not just the job and their relationships with colleagues, but also a family life.

Norrell’s parents worked for a Springs Industries textile mill in Lancaster. She took a job there, too, to pay her way through college as the first person in her family to attend.

“We made sheets and pillow cases, and I got to have lunch with my daddy … I really learned so much working at the mill.”

Early this week, S.C. Rep. Jim Clyburn said he was impressed with Norrell’s journey. Her experiences “align with a vast majority of South Carolinians, unlike the candidate on the other ticket,” he said.

Evette’s achievements were by no means handed to her. In fact, she grew up believing in the opposite.

Before moving her family to the South to start a business, and eventually being selected by the governor to run with him, she was raised by a tool and die maker who used to tell her no one accomplishes anything by themselves.

McMaster reportedly told her something similar — that “nobody ever got anywhere without somebody reaching out and helping.”

“The fact that he said that just kind of like stopped me in my tracks, because it is something that I heard growing up my whole life,” Evette said.

“I don’t think anybody is self-made … You might pay for your own education, or you might work super hard, but you did that because you had people helping you along the way,” the Democrat said Wednesday. “And it’s not just your parents … the whole community comes together to have an influence in a child’s life and help them become who they’re going to be. And now, I get to represent my village.”

McMaster told the restaurant full of voters Wednesday that they’re “living in paradise.”

Evette has love for her home state, but definitely shares her running mate’s sentiment.

Norrell has been a South Carolinian her whole life, but still feels like campaigning and traveling has been an eye-opener.

“I am having so much fun discovering parts of the state that I knew about, but I’m seeing them in a different way.”

When asked what she does for fun or to relax, Evette didn’t hesitate to talk up her family.

“I hang out with my kids … We do all kinds of stuff as a family. We have horses, we hang out at our house, we swim,” she said. “Family time, for me, is the best.”

Norrell puts her family first, too, but her personal hobby isn’t what her campaign staff expected.

“They tease me about this all the time because they don’t think I seem like the type to do this. My favorite thing to do is look for fossils,” Norrell said. “The campaign manager is always like, ‘You are such a nerd, Mandy.’”

The Lancaster representative even said she’s made the bus stop in places close to the South Carolina beaches so she could find multimillion-year-old artifacts from turtle shells to stingray barbs.

A majority of South Carolina elections swinging to the right of the aisle, but neither Evette nor Norrell are their running mates’ partisan attack dogs.

Much like McMaster’s praise for Evette’s ability to “relate to anybody,” Smith praises Norrell for being well liked and respected by their Republican counterparts.

“We don’t have that antagonistic relationship that you see in Washington. In South Carolina, it’s about relationships,” Norrell said. “Not a lot is partisan … We’re just trying to do what’s best for everybody.”

The two women on South Carolina’s gubernatorial tickets are “not enemies,” Evette said at their debate last Monday.

They’re mothers, wives and, according to their peers, patriots.

Winnsboro resident Tangee Brice Jacobs was encouraging people at Smith and Norrell’s tour bus stop to make sure they vote on Wednesday. Nicknamed “Mama T,” she’d been getting out and doing so during election seasons ever since she was a child.

“I get out here and I work for these candidates because I want them to know me … Once they get elected, I’m holding them accountable for what they tell me,” Brice Jacobs said. “Not the platform, but what you’ve said to me. That’s why I’m Mama T.”

“A good leader has to be positive,” Evette said to supporters at the bus tour kick-off. “Accentuate the positive, [and] get the other stuff taken care of.”

Evette has also said the passion for the state of South Carolina she saw in McMaster is part of what “endeared” her to accept his running mate offer. Her supporters see the same thing in her.

“She’s a patriot,” said Richard Peterson, the president and CEO of the Greater Lake Murray chamber of commerce.

Brice Jacobs, who said she did not know Norrell before the campaigns began, was asked what the first thing that came to her mind was when she saw and heard Norrell speak.

One thing all the candidates for South Carolina’s executive office claim to have is a love for the Palmetto state and a readiness to accept its challenges.

Evette, new to the game of politics, has said she’s gotten comfortable. She has a fire in her belly to match Norrell’s.

“I’m excited. I got to meet so many in the legislature because they came out for us in the primary, both Republican and Democrat,” she said. “And through this year we’ve been on the road together and working so hard, and so I’m excited.”

Norrell said she couldn’t describe her journey from the House to this point in the campaign in just a few words, but she tried.

“It’s been … an essential adventure,” Norrell said. “There’s a heaviness to the obligation. Once you take it on, you have to give it everything you’ve got.” 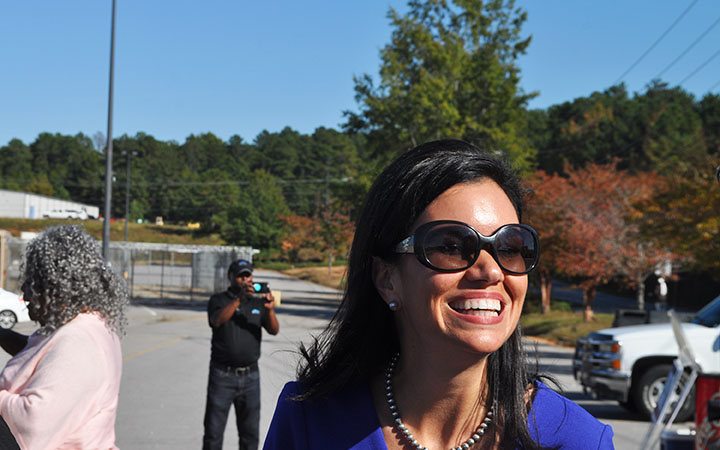 South Carolina Rep. Mandy Powers Norrell met and greeted supporters in Winnsboro on Oct. 31 while on a bus tour of the state. The Democrat is running for lieutenant governor on the same ticket as gubernatorial candidate Rep. James Smith. 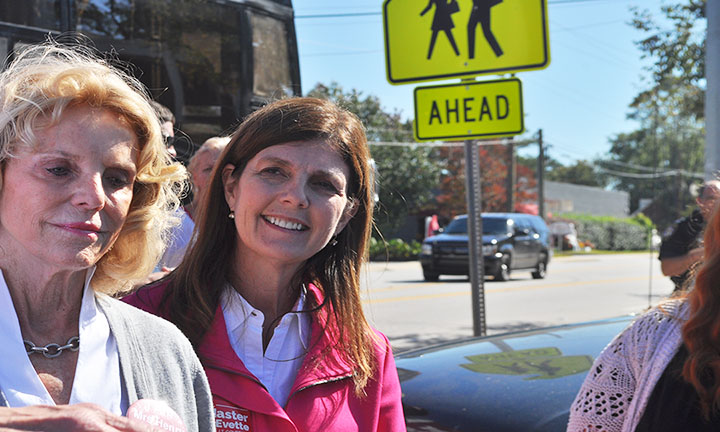 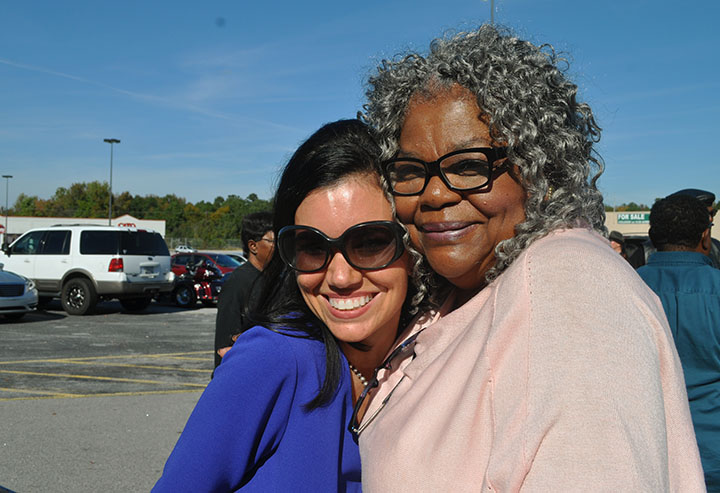 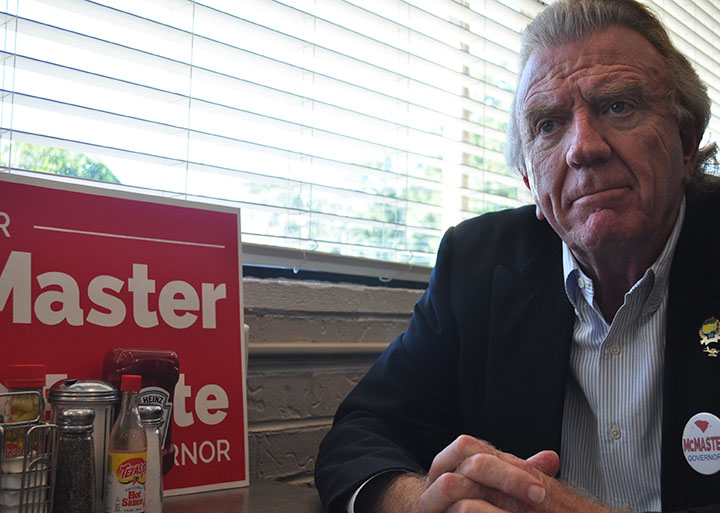 Richard Peterson, the president and CEO of the Greater Lake Murray chamber of commerce, attended Gov. McMaster’s tour kick-off in Cayce. Evette is “a patriot, a mother, a wife and one heck of a businessperson,” he said. 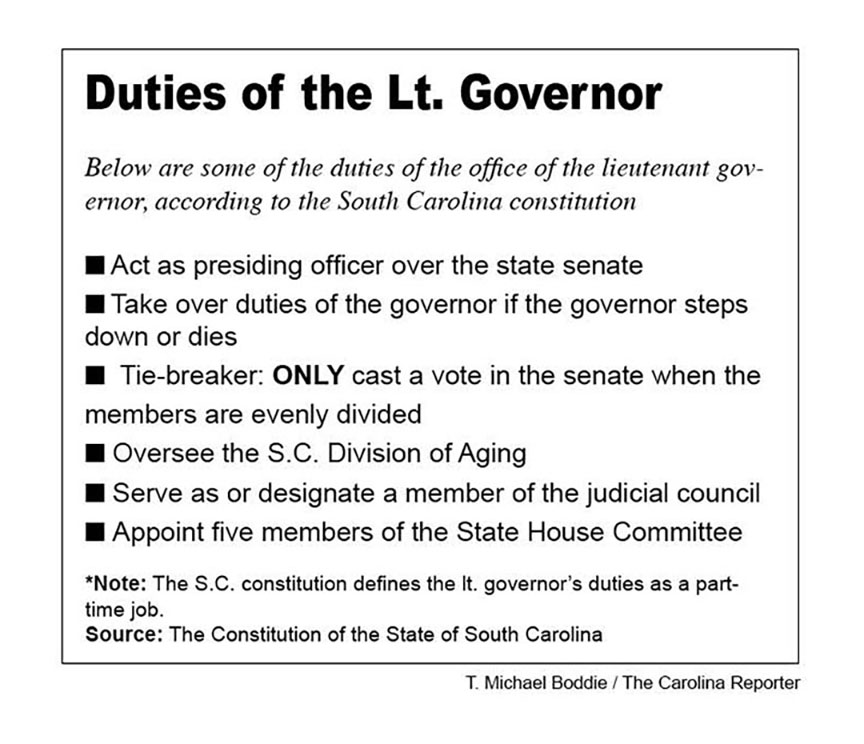