Anatomy of a rebuild: Allen football working to raise program from ground up 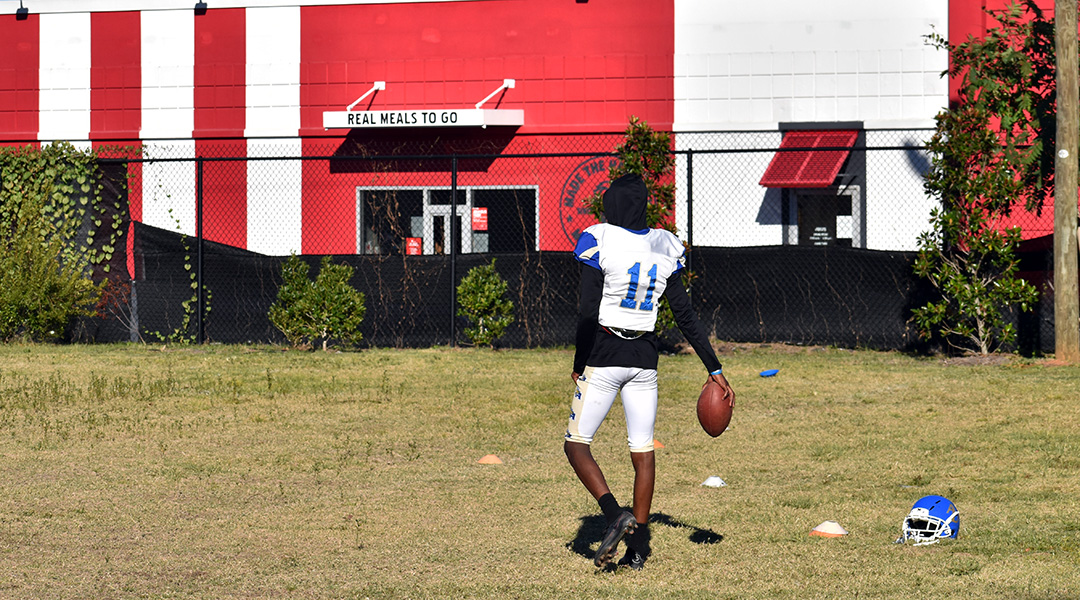 An Allen University football player holds a football on the teams practice field on Taylor Street. The team is 0-5 so far this season. (Photos by Michael Sauls)

A 64-yard lot of beaten grass sits between a Kentucky Fried Chicken and a student fitness center on the edge of Allen University’s campus.

Monday through Friday after 5 p.m. you can find the recently resurrected HBCU’s football team out practicing on the lot, wearing down the grass even more.

“(We’re the) No. 4 offense in the conference, and we don’t even get to run 100 yards a day,” head coach Teddy Keaton said, referring to the less-than-70-yard-long grass lot.

The practice field is just one of the concerns for a football program that resurrected itself in 2018.  Wins have been hard to come by. The program is 9-22 all-time and is 0-5 so far this year, though four of the losses have been by less than one score — including three losses by two points.

Despite the winless record, Keaton and his players say they are optimistic about the trajectory of the program, even in the face of the difficulties it takes to build a program from the ground up.

Keaton has been Allen’s only head coach since the program made its return from a 13-year hiatus.

When he was approached about the job his response was simple: “Where’s Allen? I’ve never heard of Allen.”

Keaton’s unfamiliarity with the school also applied to Columbia as a whole, but to a lesser degree. He said he knew a “little bit” about the capital city because his cousin, Marvin Orange, attended Irmo High School and was South Carolina’s Mr. Basketball in 1992, and then played for the University of Alabama.

Before becoming the head man at Allen, Keaton was head coach at his alma mater, Alabama’s Stillman College, from 2011 to 2015, when the football program was shut down. He then became the running backs coach at the nearby Miles College, where he stayed until he got the call to “build something” at Allen.

“It was an opportunity to start something from the ground up. It’s a legacy builder,” Keaton said.

Starting from the ground up is literally, if painfully, correct when describing the revitalization efforts.

The Yellow Jackets not only lack flashy facilities that are often synonymous with collegiate athletics, they lack basic facilites, such as a stadium or a full-length practice field.  Only four members of the coaching staff are full time. In comparison, Benedict College, which is across the street from Allen, has 10 full-time coaches. The NCAA allows for up to 11.

THE FACILITIES — OR LACK THEREOF

First, there was COVID, which shut down the then 2-year-old program for a year.  Then, Higgins Hall, a once abandoned residence building on campus where the team practiced, began a renovation, forcing the team to find another spot. That other place was the softball field by the Blatt fitness center on USC’s campus.

Sophomore defensive end Justin Eaton said the bus to get to the field for practice left every morning at 4:30.

“I love football so much,” he said. “But I remember getting off the bus and I’d be sitting down putting my cleats on and I’d be like, ‘Remember what you do this for, man’ because I’ll say – that sucks.”

This year, the team has regained its on-campus practice field — the 64-yard grass field. But it still doesn’t have a home stadium.

The year the program restarted, Allen played at Irmo High School.  The following year, they moved to Westwood High School in Blythewood, where they still play.

Although Keaton said Westwood is a “beautiful” place to play and is a great atmosphere for the “400 or 500” fans who show up, he said the 20-minute drive hurts attendance.

Both Eaton and sophomore running back Beau Harrington said it’s odd playing college football in a high school stadium, but that once the whistle is blown, they don’t think too much of it.

“Again, it is what you make it … ,” Harrington said. “I just try to just play and I just know in my mind we’re playing a college game. So I just try to focus on that — not even worry about my surroundings.”

Plans for Allen to build a stadium are in the early stages of development, athletic director Jasher Cox said.

“I always tell people construction, development – whether it’s athletics or any other department within a campus – those things come to fruition whenever institutional resources allow,” Cox said. “Our university is going to have his own football stadium, and it’s coming. And I think we’re getting closer and closer each month.”

Cox said it’s still too early for a construction timeline, joking that it isn’t anything he would candidly speak about until they were “cutting tape with a hard hat and digging ground.”

Allen’s location in downtown Columbia makes space for a stadium limited. But players have hope that the stadium will be built soon.

“It would mean a lot, not just for this program, for the whole school,” Wright said. “It would just make people want to be here more, make people just want to play football here more.”

Cox said a successful, fully built football program would be a great draw for all kinds of students.

“When you’re successful, it garners attention, and now you’ve got others paying attention that want to be a part of it,” Cox said. “It’s been a huge enrollment lever … And once the wins continue to start to come in, I think that’ll get better as time passes.”

Data from the admissions office shows enrollment has fallen since 2019, possible because of the pandemic. Enrollment at the school did rise 10% from 2018 — the year the program restarted — to 2019. Last year, the school had 621 students enrolled.

Recruiting for a brand new program is challenging for any school on any level, but it can be harder for a school like Allen that also lacks a winning pedigree — or a stadium.

Sophomore running back Beau Harrington came to Allen from Davenport, Florida. He said he had interest from a few Division I schools, but when, because of COVID, the NCAA granted all athletes enrolled in the fall of 2020 an extra year of eligibility, those schools stopped calling.

“The pitch I got from Allen was just like, they kept it blunt with me. They kept it real,” Harrington said. “It’s a new program. They want me to come in and be a difference maker. I came and visited and I really liked it.”

As for what his recruiting pitch is to prospective student-athletes, Keaton said he tries to find the kids who simply “want to play football.”

For Harrington, multi-million dollar facilities weren’t at the top of his list. Rather, he cared more about having the potential to earn more playing time as a younger player, something he said he had a better opportunity to do at a new program like Allen.

“It is what you make it,” Harrington said. “It’s a lot of people that would kill to be in my position right now. I know it’s a lot of other programs who have less than us. I’m just grateful, and I thank God to be able to just go out and practice on a little lot and be able to play on Saturdays and stuff like that. So it is what I make it. Like, it’s good. So I just work hard and use what we got.”

Quarterback David Wright said he visited Allen during COVID and committed the next day. The sophomore from Tampa, Florida, played all 13 games of his career before suffering a season-ending ACL tear against Central State on Oct. 1.

Wright said it’s “most definitely” accurate that the players on Allen’s roster are here in Columbia to do one thing: play.

“If you was here for the facility, you know, you’re not here to play football, because we don’t have the best facility, but we make the best of what we got,” Wright said.

As for Eaton’s recruitment, the Goose Creek, South Carolina, native had just a single Division I offer from Charleston Southern. But the head coach resigned, he lost the offer, and ultimately decided to take a gap year between high school and college, hoping for another offer.

A walk-on offer came from Allen in 2020. He took it, held on through the COVID shutdown, and has since been given a scholarship.

“There’s already the fact that I haven’t played football in a year already,” Eaton said. “Then, I get up here and I’m still not playing football like I did. I just came up here, and we’re just working out, doing school stuff, getting my grades together. I just felt like I didn’t know if I could play at a high level that I used to play at. So it took me a little bit to get back into the full swing.”

Last year Eaton played in five games, garnering just nine tackles.  This year, he’s tied for third on the team in tackles, at 19, and sacks, with three.

Allen has four games remaining this season, three of them against conference opponents. The Yellow Jackets will take on their across-the-street rival Benedict on Nov. 5.  The matchup will be televised on ESPN+.

There’s still time for Keaton and his team to turn around the season and end on a positive note. Eaton said he’s already seen improvement in the short time he’s been with the program, saying the team has progressed “light years.”

The school already has begun the process of moving up a division, from NAIA to Division II.

“We’re not supposed to be moving at this fast pace and be able to compete against these guys in a four-year span – and not counting the COVID year, a three-year span,” Harrington said. “I feel like, after me, it’s going to be — it’s going be a top dog in the SIAC and maybe even one day be able to move up.” 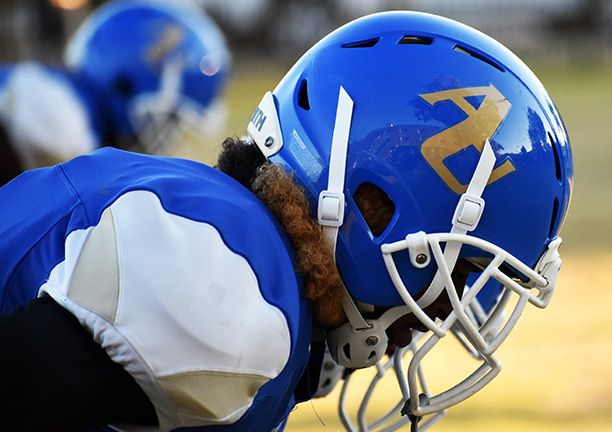 An Allen football player lines up, preparing to run a sprint. The Yellow Jackets practice Monday through Friday after 5 p.m. 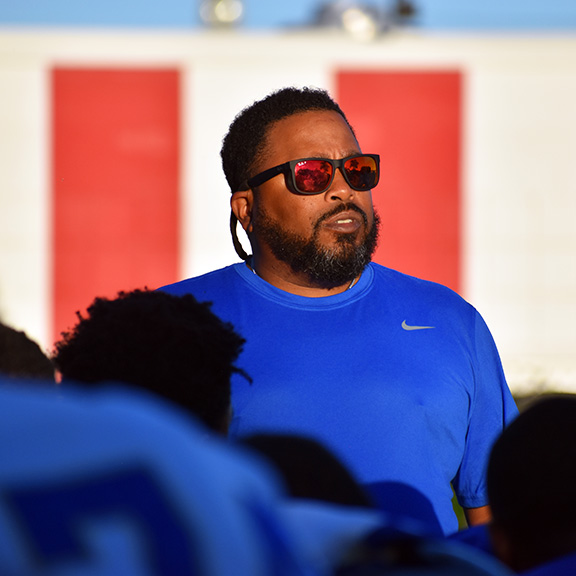 Head football coach Teddy Keaton addresses the team after practice. Keaton has led the team since its inception. 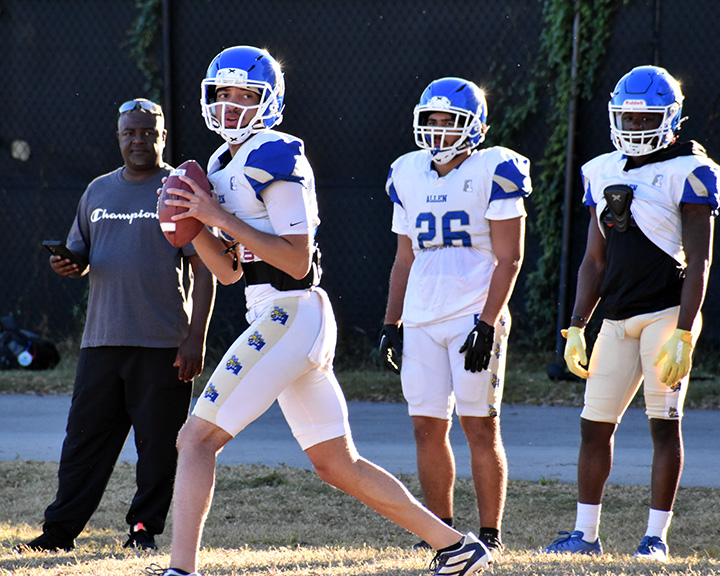 Quarterback Michael Reese drops back to pass during practice. Reese has taken over as the starter after an injury to David Wright. 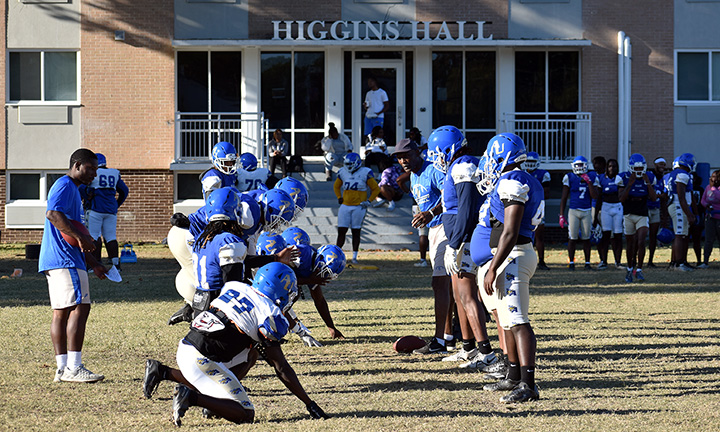 Allen special teams working during practice. The team practices on a 64-yard lot in front of Higgins Hall, a residence building on Allen’s campus. 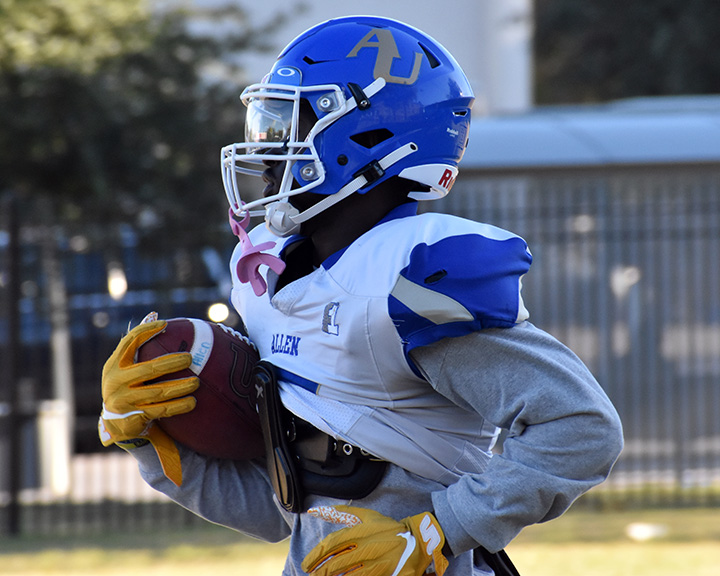 An Allen wide receiver runs a pass downfield. The Yellow Jackets have the best passing offense in their conference.