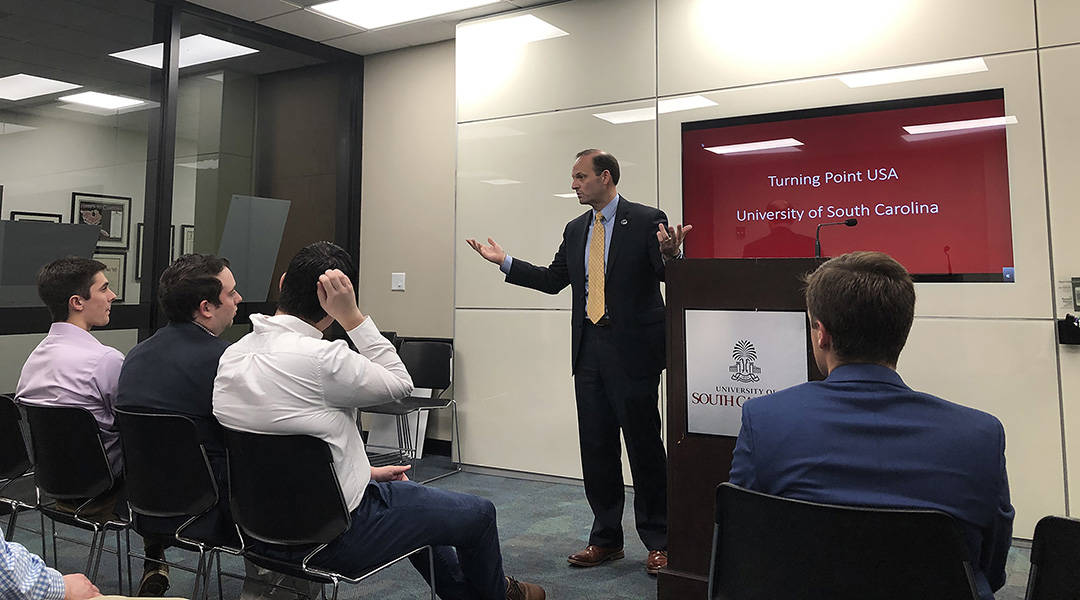 South Carolina Attorney General Alan Wilson speaks with a group of UofSC students at a Turning Point USA meeting on campus. Wilson is suing the city of Columbia over three new gun ordinances.

The new ordinances prohibit firearms within 1,000 feet of a school, allow guns to be taken from people with an extreme risk protection order against them and add “ghost guns” to the city’s nuisance laws. Ghost guns are illegal firearms without serial numbers.

“We could have a patchwork of gun laws, making it impractical for people for people to own a firearm,” Wilson said. “Because if you violate five ordinances every time you drive across town, it’s gonna make it hard for you to have a firearm which undermines the Second Amendment.”

In 2018, South Carolina had the twelfth-highest rate of gun deaths in the United States, with 17.6 deaths per 100,000 people, according to the Centers for Disease Control. These ordinances are part of an effort to lower that number, especially here in the capital city.

“We’re here to help spread a message that we gotta put a stop to gun violence,” Richland County Sheriff Leon Lott said at a rally to end gun violence earlier this month.

After the ordinances were passed, the attorney general’s office sent a letter to the mayor stating that the city was in violation of state laws and the Second Amendment. The city maintained its position in a return letter, which sparked Wilson’s lawsuit against the city.

Wilson, a Republican, said the concept of “home rule” generally takes precedence in South Carolina, meaning local governments have more power than the state government. But he insists that every general rule has an exception.

“The General Assembly 30 some odd years ago passed a statute on the books that says while we recognize ‘home rule’ … we want to reserve on ourselves the ability to control the regulation of everything dealing with firearms,” Wilson said.

The mayor’s office believes it is well within the city’s rights to pass these ordinances.

“As the city of Columbia has consistently insisted, S.C. Code Section 5-7-30 permits it to enact ordinances which preserve ‘health, peace, order and good government,’ and that it is the first duty of the government of the city of Columbia; to protect their people,” Senior Assistant City Attorney Patrick Wright wrote in a letter to the attorney general about the school zone ordinance.

Wilson believes the state Supreme Court will side with his office because the court has generally ruled in favor of state government over local municipalities on gun regulation since the 1990s.

“Every single municipality and county in the state would pass a patchwork of laws. I live in Lexington. I drive through three municipalities to get to Columbia,” Wilson said. “If every one of those jurisdictions passed a separate gun ordinance then just from crossing a line I could violate three separate laws.”

The city thinks this lawsuit is driven by politics rather than precedent. The state’s high court and a previous attorney general have held that if there’s no conflict between a state statute and a municipal ordinance, “both laws stand.”

“The ordinance as it stands is actually less restrictive than current state law when taking all exceptions into account. There is no conflict. The City’s ordinance mirrors the current federal law except where it restricts itself to comply with state law. What seems apparent is that the requesters of an opinion from your office did not actually read the ordinance in question,” Wright wrote.

Wilson wants this case to be heard in the Supreme Court first, but is willing to have it wind through the circuit court.

“The mayor is a very good friend of mine,” Wilson said. “He has a position I disagree with; I have a position he disagrees with. We’re going to let the courts decide.”