Once a medieval pastime, axe throwing is making a comeback. In recent months, axe-throwing venues have popped up around the nation.

“We coin it as bowling mixed with darts,” said Jake Jensen, one of the partners in charge of Craft Axe Throwing.

Craft Axe Throwing opened up in Greenville last March, and it offers individual lanes that can accommodate up to four people each. Just like darts, the aim of the game is to hit the bullseye.

Evan Stone, a co-manager at Craft Axe Throwing in Greenville, says that it’s not just a young man’s game.

And it’s not just a man’s game, either. Stone admitted that his wife is far better at axe throwing than he is.

Many axe-throwing venues across the nation also sell alcohol. While beer and sharp objects seem like a dangerous combination, Jensen said that his business closely monitors alcohol consumption in order to avoid injuries.

“We’ve only seen a scratch so far, and mostly, I’ve seen a few slivers,” Jensen said.

Potential scratches and slivers are precisely what scared Casey Ahmed, who came to Craft Axe Throwing one afternoon with her co-workers.

But after a few throws, she said it actually started to relieve some of her stress.

Stone said that many people, like Ahmed, stop by Craft Axe Throwing to relieve their workday stress.

“If you had a hard day, definitely come throw some axes,” Stone said.  “Twenty minutes – you’ll feel a lot better.”

Given the sport’s recent popularity, Jensen purchased a space at 700 Gervais St. for a Columbia location of Craft Axe Throwing, which is set to open its doors mid-December. 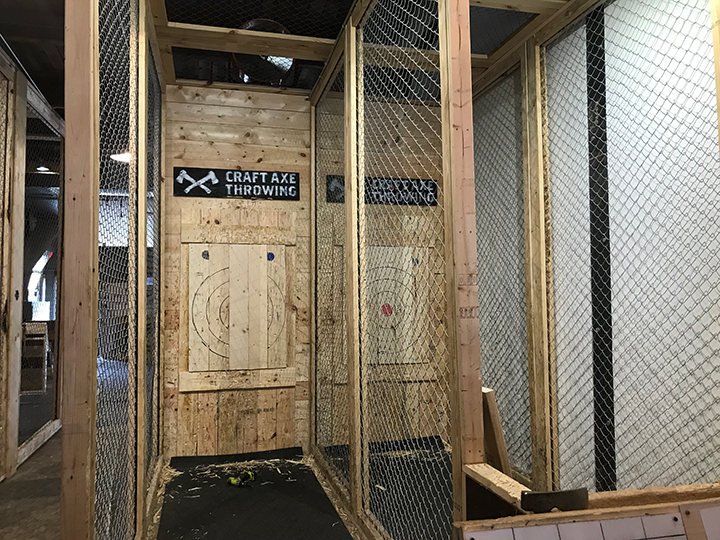 A sport with medieval origins, axe throwing is making a comeback.