Ballerina and camel replace politicians at the State House 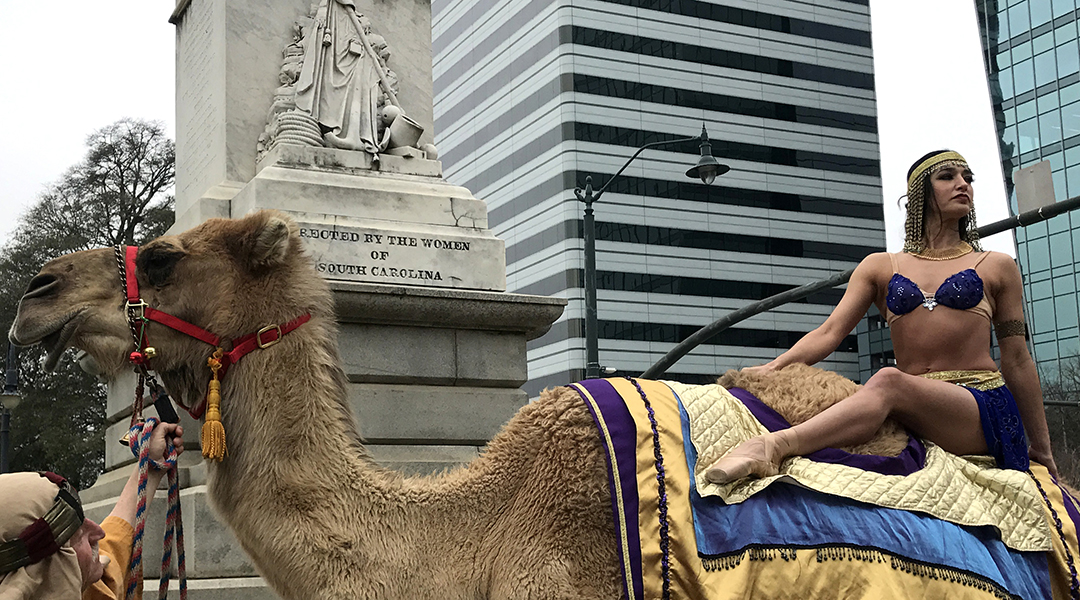 Dancer Regina Willoughby was filmed atop a camel Monday at the State House for her retirement performance commercial. 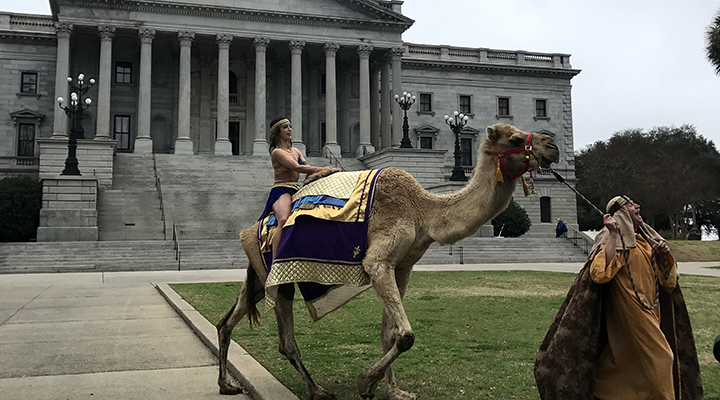 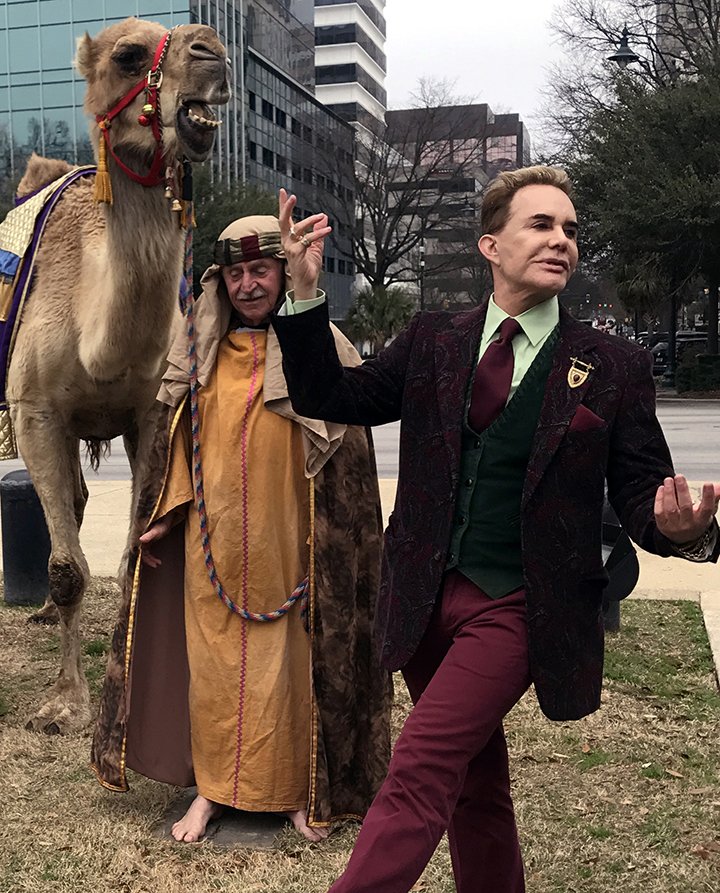 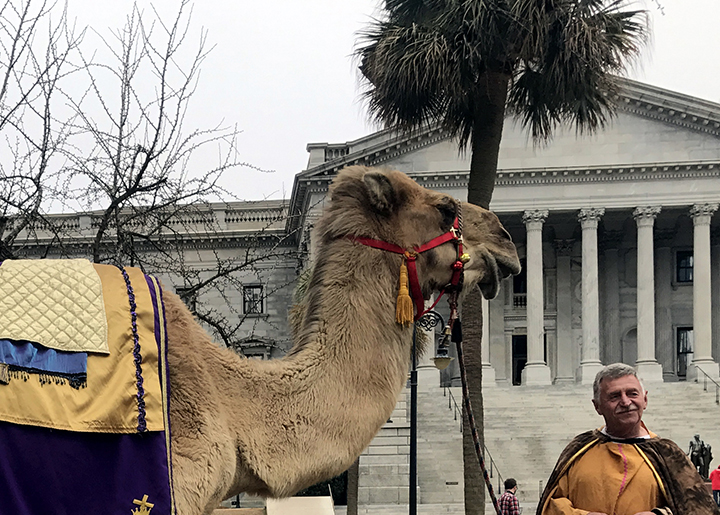 Clifford Fisher prepares his camel for filming outside the State House. 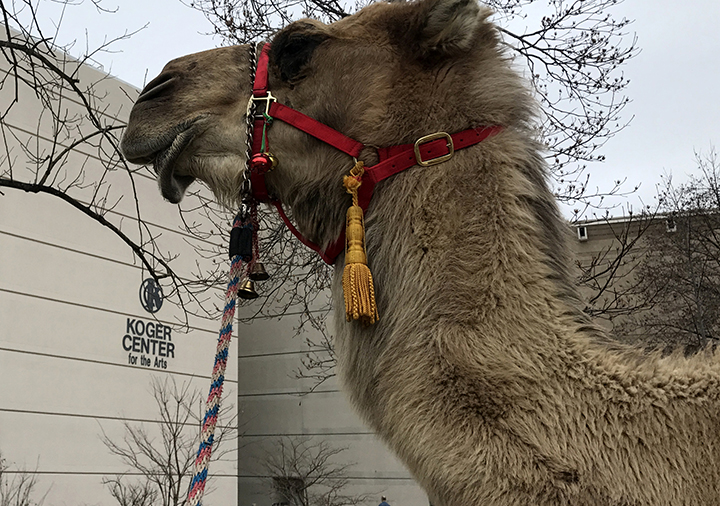 Father Abraham poses for one of his final commercial shots at the Koger Center for the Arts where the Columbia City Ballet is staging “Cleopatra.”

What happens when a ballerina and a camel meet up at the South Carolina State House?

For one thing, they draw a crowd. That’s what happened Monday when Columbia City Ballet ballerina Regina Willoughby climbed aboard a friendly camel named Father Abraham to film a commercial for her upcoming, final dance performance as Cleopatra in the ballet of the same name.

“It’s very bittersweet to be performing ‘Cleopatra,’ and very special to have a ballet created for me,” she said. “Not everyone gets that opportunity. It’s awesome to get the opportunity to do it again, but it’s also my last ballet so very bittersweet.”

After a lifetime of dancing, Willoughby is retiring from ballet, and to close her career, she will be performing the full length “Cleopatra” March 24 at the Koger Center for the Arts. This performance is full circle for her, as the role was created specifically for her in 2008 by William Starrett, the executive and artistic director of the ballet.

“It’s her favorite ballet that she has performed,” Starrett said. “I created it for her because she looks like Elizabeth Taylor, and so she chose this performance to be her final farewell retirement performance.”

Dressed perfectly for the role of “Cleopatra,” in an Egyptian-style top and shirt, she rode on an equally decorated camel and stunned passersby during the filming.

“I thought it was fake, and then when it (the camel) started moving I ran across the street; the light was red or green, I didn’t care,” Kurt Bennett said.

Willoughby rode the camel with confidence and grace.

“I wasn’t nervous [about injury] at all; I’m very much a daredevil,” Willoughby said. “It was a very different experience for sure, but he is just the sweetest thing.” She said she planned to go skydiving when she retired.

Father Abraham, the camel, was escorted by his owner and handler, Clifford Fisher. He has owned Father Abraham for 20 years, along with a barn full of other exotic animals.

“We do these commercials on special occasions. He gets along with everyone; he’s a big dog, don’t tell him he’s a camel,” Fisher said. Father Abraham was rewarded with his favorite drink, Mountain Dew, after his 15 minutes of fame.

Willoughby joined the Columbia City Ballet in 1997 and danced roles that landed her reviews describing her as “the company’s most enchanting female performer, both technically and dramatically.”

In retirement, she will continue to teach dance.

“I have a ballet school in Lexington. I’ve had it about 10 years, and it’s been growing so much I will definitely still have my hands full after I retire,” she said.