Practicing portraits and friendship for 23 years 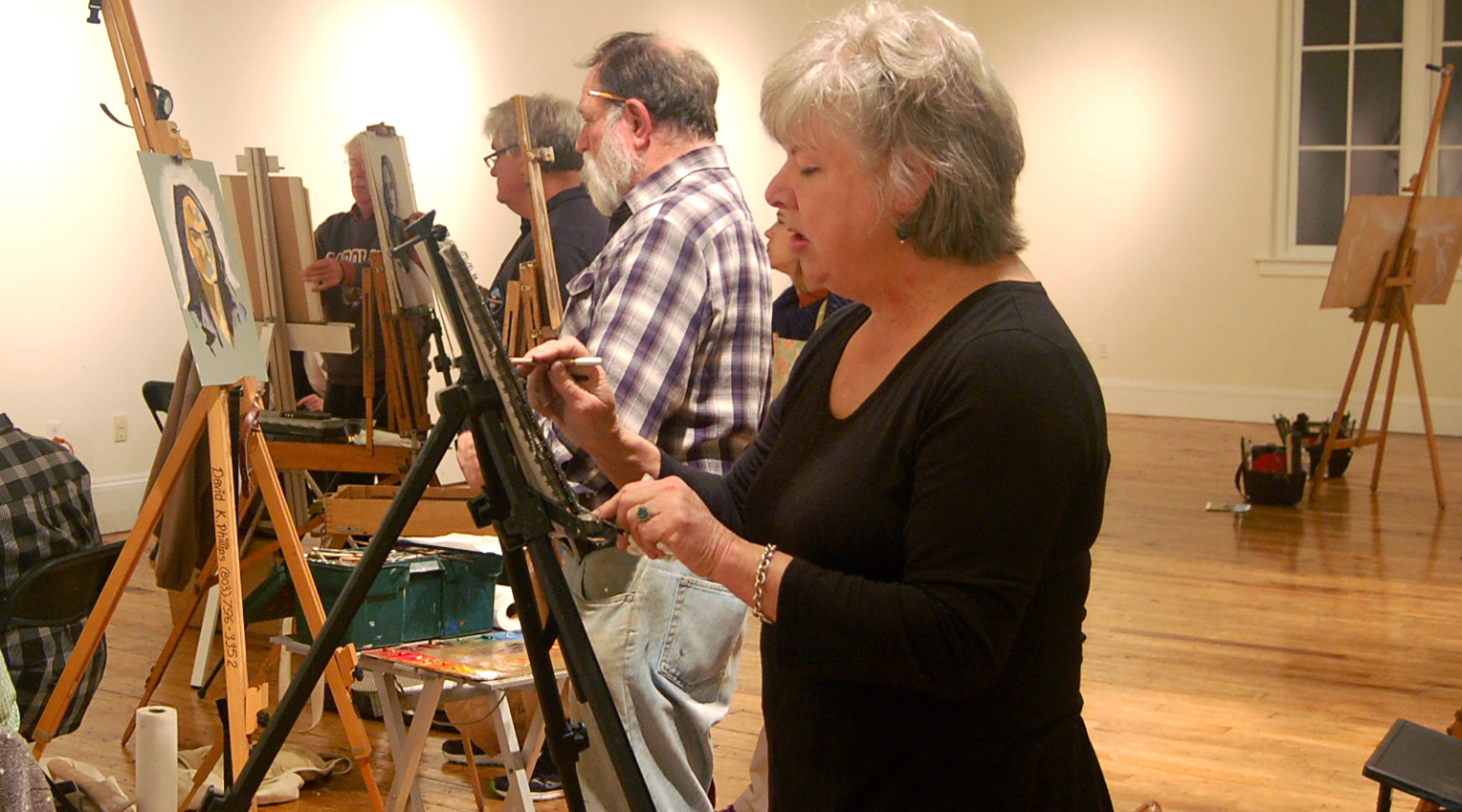 A group of Columbia artists come together each week for About Face Drawing Sessions. They draw or paint from a live model and enjoy snacks and company during their breaks. Barbara Yongue has been coming to the sessions for 15 years. 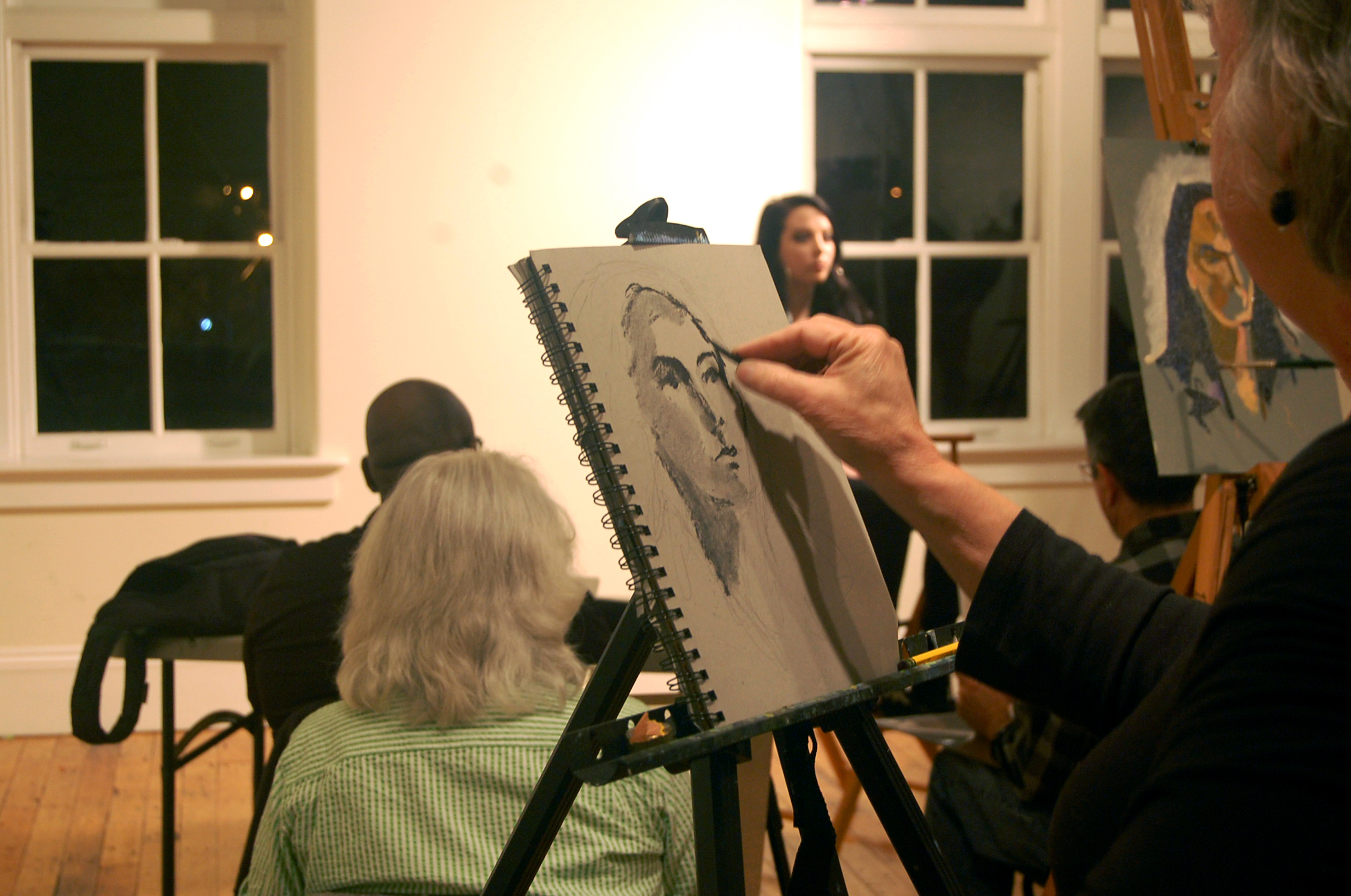 Barbara Yongue paints oil portraits professionally but prefers to draw in charcoal during the About Face Drawing Sessions. 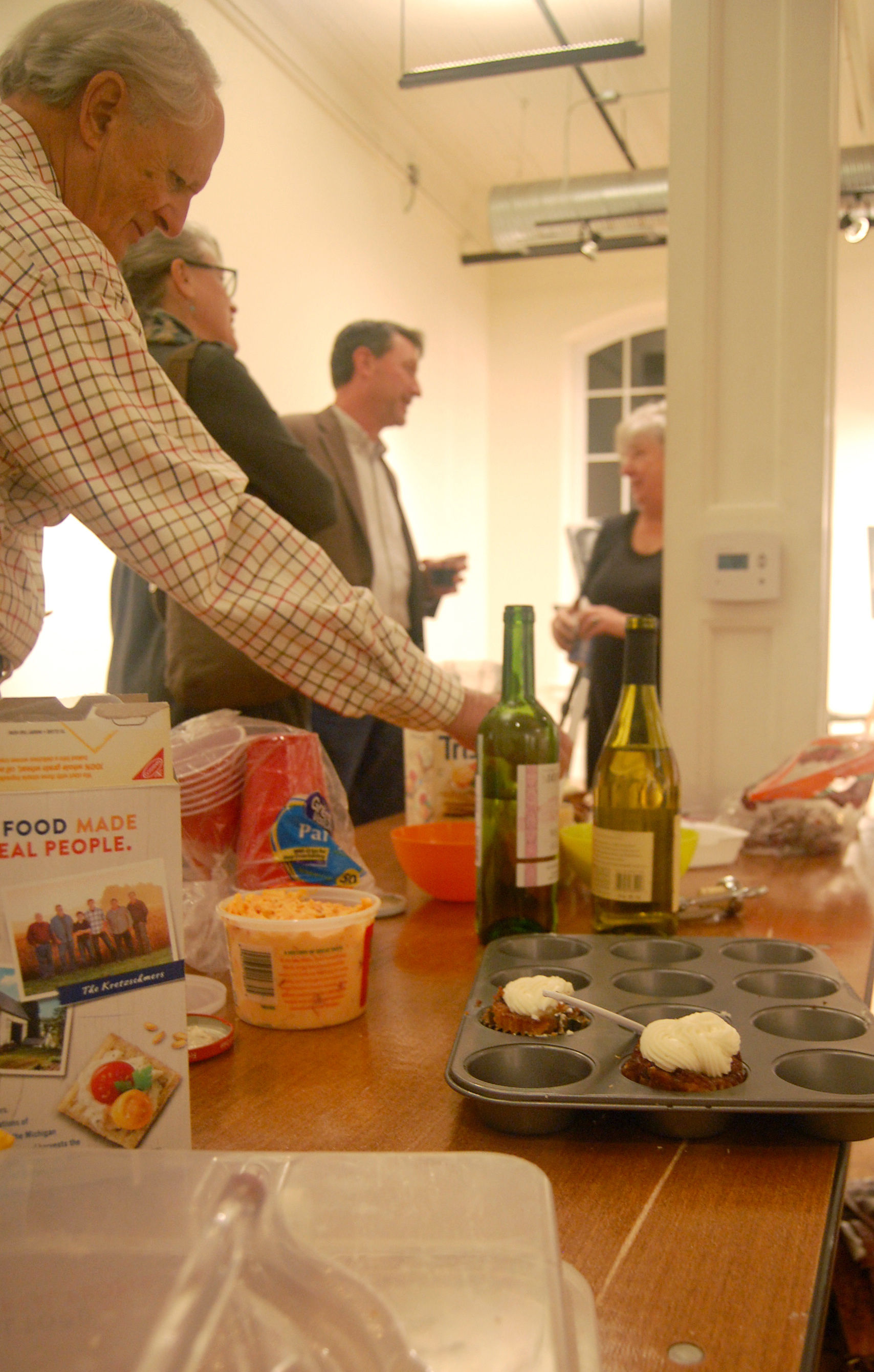 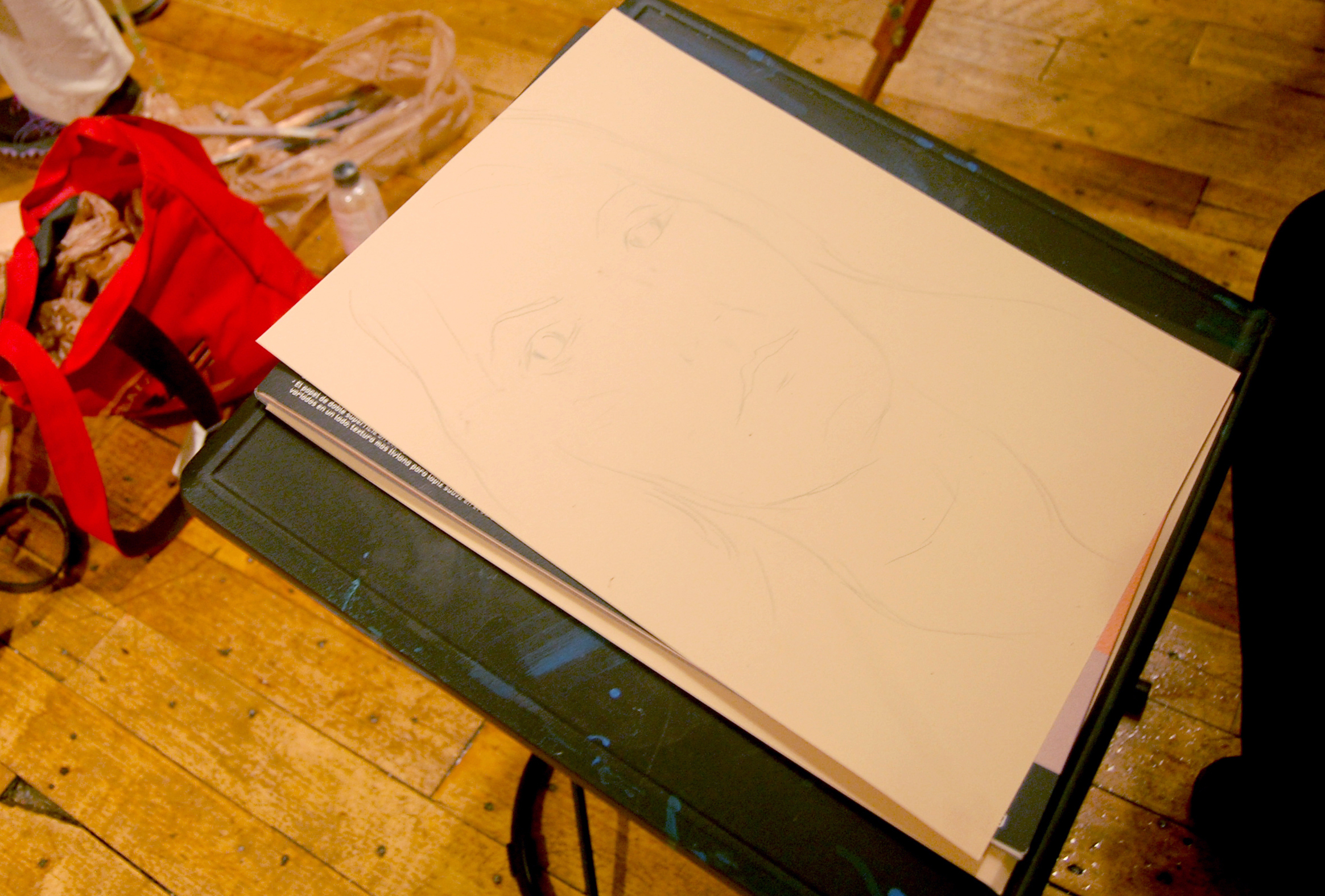 Susan Edwards has been practicing drawing portraits with the About Face group for almost three years. Making a commitment to a group helped her dedicate time to growing her skill. 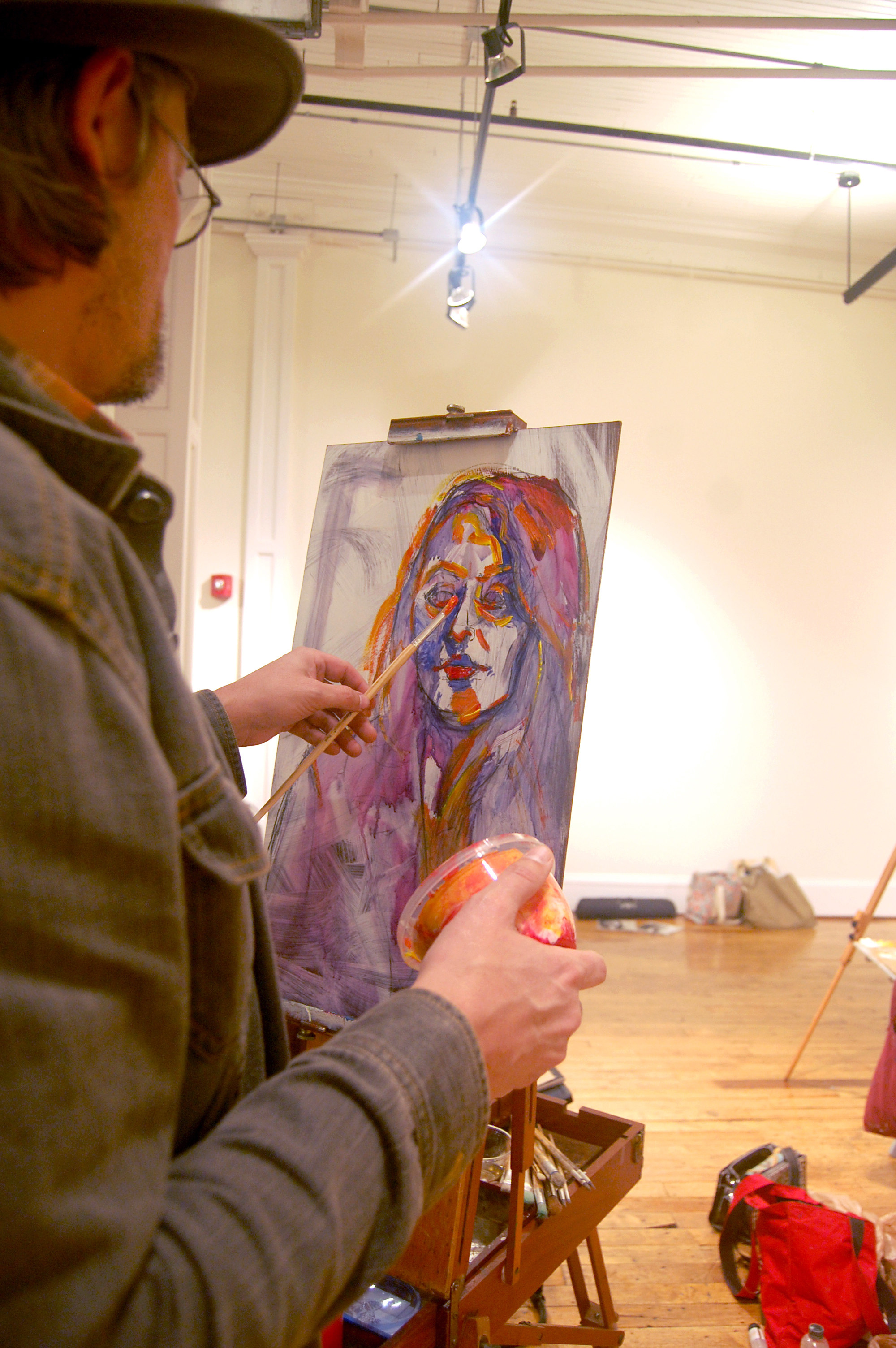 Trahern Cook has been painting portraits with the About Face group for nearly 10 years. 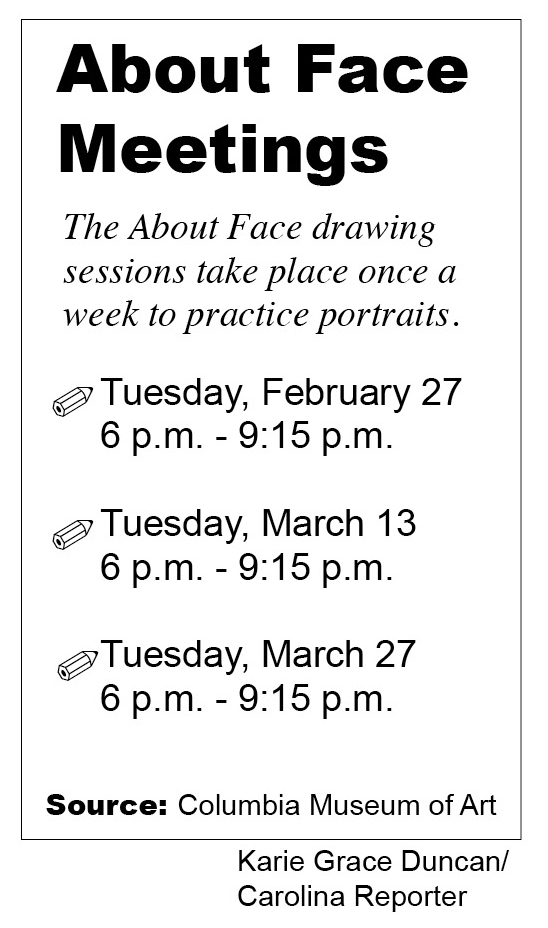 Laughter and conversation fill the room when the About Face group breaks for snacks and conversation. Then, after the brief social time, quiet descents and only pencil or brush strokes can be heard.

“Even if I’m standing in here with 20 other people, when I’m painting, I’m by myself. I’m alone in what I’m doing,” said David K. Phillips, a professional oil painter who organizes the About Face sessions.  “So, when the break comes, we’re with our friends.”

The About Face Drawing Sessions are held each week, drawing in a group of artists from professional to novice who want to hone their portrait skills in a non-classroom setting.

During the sessions, the group breaks several times for wine and snacks they bring to share.

The group has been around for 23 years, starting with just five artists meeting in a home office until they outgrew the space.

About eight years ago, About Face became part of the Columbia Museum of Art’s outreach groups.  The group now meets at 701 Whaley while the museum is under construction.

In each session, artists paint or draw portraits of live models, including a model who poses in the nude. Phillips typically recruits models that he or the artists know, but anyone is welcome to suggest a new model.

“But this is a wonderful group of artists, and if somebody tells me they have someone that would be a great model, I’ll hire them,” Phillips said.

Phillips says he welcomes input from the group and trusts their judgment.

“In 23 years, we’ve only had to ask 2 or 3 people to leave for their behavior,” said Phillips. “A lot of people want to paint the nudes, but they don’t know how to behave in front of the nudes. We’ll tolerate some misbehavior, and then we’ll ask them to leave.”

Professional portrait artist Barbara Yongue has been participating in the group sessions for 15 years.

“We’re all friends and have been friends for a long time; so it’s almost like coming to a party every time we get together,” Yongue said.

Unlike when she’s creating her commissioned oil portraits, Yongue works in charcoal during the sessions because it’s faster.

“In this situation, you’re not challenged to present as the person who’s commissioned you would like to be presented. I’m free to do my own interpretation,” Yongue said. “It’s freer.”

Susan Edwards has been with the group for almost three years. If you are not a professional artist, she says About Face is a great experience to practice and get better.

“I needed a dedicated time. If you’re ever going to get any better, you need to practice and do something regularly,” said Edwards. “So, making a commitment to a group was a way for me to do that.”

But Gerard Erley, a professional artist who normally paints landscapes and won best of show in the 2017 SC State Fair Fine Art contest, says the sessions can help anyone.

“I need the practice, too,” Erley said. “It doesn’t just happen.”

“Right now, my goal is to keep this running for the next 40 years and see how old I can get,” Phillips said.

And if you’re ready to dip your brush in the paint and give it a try, your first visit with the group is always free.

“You’re always our guest for the first time, no matter how tight the money is. Somebody’s going to bring something to eat and we’ll have enough to pay the model,” Phillips said.