Behind the fence: After era of mass incarceration, what’s next for S.C. prisons? 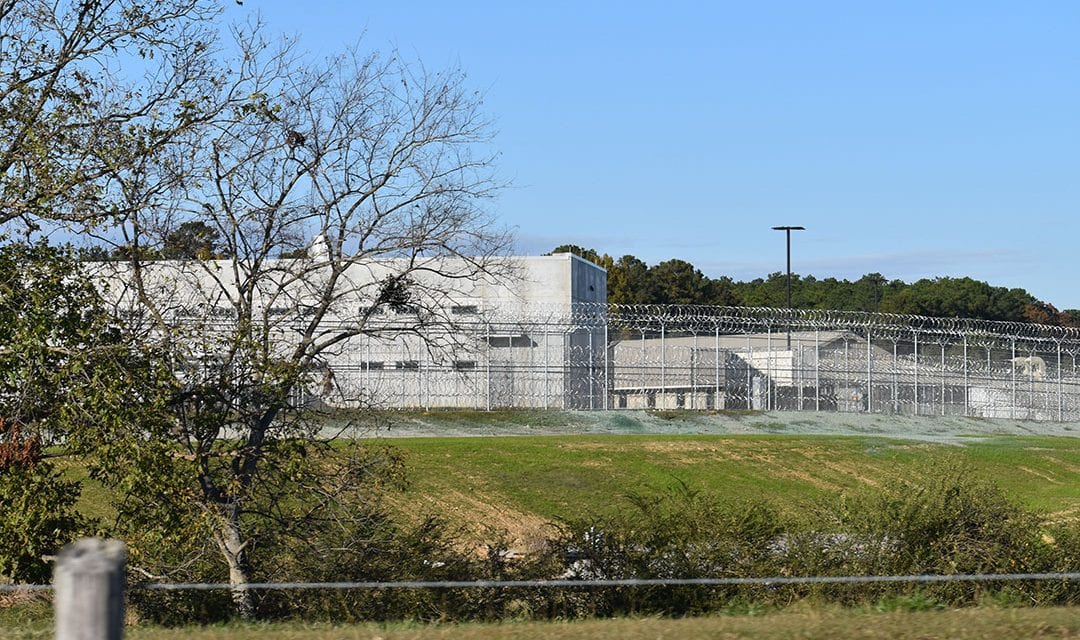 First in a four-part series.

From a distance it appears, strangely, like a sprawling high school.

To a visitor arriving at Kirkland Correctional Institution in Columbia, that resemblance was subtle and purely visual, but it was there. The bulletin boards were neatly pinned and the main office even had a trophy case.

Davis oversees the maximum security prison that houses some of South Carolina’s most violent criminals and represents the first stop for evaluation and induction into the massive prison system. In his years in the system he has witnessed an evolution in the way South Carolina and the nation’s looks at incarceration, from the “lock-’em-up” mentality of the 1990s to the second-chance rehabilitative approaches of today.

Inmate numbers that had risen until 2000 have decreased significantly in the Palmetto state during the last two decades. The  SCDC facility populations have dropped four percent since last year alone.

The visitor wanted to know what life behind bars was like and what lessons “behind the fence” could be learned to prevent felons from ending up there again.

The warden extended one enormous hand for a handshake after switching a lollipop to the other hand. Minutes later, he led the visitor inside the institution, “behind the fence.”

The South Carolina Department of Corrections has more than 18,000 people behind a fence of some kind—typically concertina wire —but those numbers have fallen. Six of the state’s 21 prisons have closed in the past six years.

For those who have committed non-violent or low-level crimes the task is to learn to transition to the outside world.

“A big part of that is us working to keep non-violent offenders out more,” SCDC director Bryan Stirling said. He said people, while they may deserve punishment for wrongdoing or causing harm, need second chances and not pure retribution.

The effort mirrors a nationwide shift in the way states and the federal government are looking at mass incarceration, a crisis in corrections that has been building since the 1990s tough-on-crime measures sentenced thousands of men to life behind bars. For black men, the rates of imprisonment were staggering. The lifetime likelihood of imprisonment for black men is still 1 in 3 according to The Sentencing Project, and 60 percent of the SCDC prison population is black despite the state being 27 percent black.

SCDC’s population totals were much higher in the 1990s with convicted criminals serving long and harsh sentences under “three strikes” legislation. When Stirling was starting out, opportunities were also limited for inmates who get released after those long sentences.

“You used to not even have clothes to take with you,” Stirling said.

Now street clothes are provided, and recidivism rates are sinking.  A work release program supplements this rise in people who make it out from behind the fence and don’t end up back, according to SCDC communications director Dexter Lee.

The criminal justice system determines if a person should be incarcerated but the opportunity, once behind bars,  to practice a non-criminal lifestyle is up to the inmate.

“It’s mostly about giving people the same respect you want from them,” Davis said as he made his way back behind his desk.

He was confident that people can get along in life on that Golden Rule principle, and that inmates practicing it with him while incarcerated might experience not just punishment, but also rehabilitation.

Taking charge of your own rehabilitation

Jeff Thore spent time behind the fence after a road rage incident about a decade ago.

“I was charged with, and pled guilty to, three counts of assault with intent to kill,” he said. “I was sentenced to nine years.”

No one in the incident was hurt. Because Thore’s crime was listed as non-violent and he had a clean prison record, he served three-and-a-half years beginning in the spring of 2009.

After his time at MacDougall Correctional Institution in Ridgeville and Manning Re-entry and Work Release Center in Columbia, he was convinced that “there is no rehab in prison,” and life behind the fence is not what someone on the outside thinks.

“Programs are their own separate issue. Some inmates gain [from] them—carpentry, masonry, GED,” Thore, 57, said. The gain is sometimes time off of a non-violent sentence, but otherwise the programs and activities aren’t much more than time-killers.

“I thought prison was like everyone I knew felt about it. It’s where deservedly bad people go,” Thore, who was 46 when he was arrested, said. “What I had to learn later was that nothing is fixed in prison.”

Despite the existence of a work release program and other opportunities for inmates to rehabilitate themselves, one doesn’t always leave prison with the job they went in with. And it can be difficult, still, to find another.

“I was a paralegal for over 23 years … After my incarceration, I became under-employed. I tried to do sales with a friend, but the business was difficult, and I got cut out of that line of sales,” Thore said.

Thore lives in Forest Acres with his wife of 21 years. They have two children.

“I have committed the past 19 years of my life to my two children and my career, always putting others first,” Thore said. “As a result I don’t enjoy many hobbies or activities. This causes trouble with [my wife], of course, but it’s part of my depression.”

Thore took charge of his own rehabilitation and is committed to leading an exemplary life. But many people do end up back in prison after leaving, failing to climb the “ladder” that SCDC can provide.

One in 10 Palmetto state prisoners is serving a life sentence, and inmates with long sentences still have to serve 85 percent of it regardless of what they’re up to on the inside.

Thore recognized that while some inmates, himself included, were “dying to leave” the state facility, some really didn’t know of a better home. This even contributed to recidivism.

“I learned primarily who would be coming back three or more times,” Thore said. “Some inmates never had it as stable as they do in jail. The risks and depravity are worth the security.”

For violent inmates, no way out

Violent incidents typically dominate prison news, and in South Carolina it’s the male institutions that have violence outbreaks and shortage of staff to handle situations.

Gang fights are more likely to break out in a men’s facility than women’s, and the riot that shook Lee Correctional Institution in Bishopville last spring is thought have been one. At the time, there were reportedly 44 on-duty guards overseeing almost 1,600 inmates and it was several hours before any staff members took action.

Stirling pointed to conflict over cell phones, contraband and territory as the main culprits. Prisons expert Heather Ann Thompson, writing for the New York Times opinion pages,  cited the staff housing rival gangs together as one reason—others being reduced visitor privileges, reduced or totally non-nutritional meals, or dirty water shown in a cell phone video allegedly from an inmate—for an eventual outbreak of violence.

Last month, a large “Now Hiring” sign stood out in front of the Bishopville prison, towering over the surrounding fields of cotton.

The beginning of second chances

Reminders of violent incidents behind the fence can make visitors to Kirkland and other prisons wary. But Davis, the warden, eases the tension.

“What do you want to see?” Davis said, already backing himself out into a spacious courtyard where a few men in bright orange were shooting hoops.

The warden exchanged a cheery greeting with one inmate and then motioned him over to the visitor.

“Tell him how long you been in lock-up,” Davis said.

The 47-year-old man’s uniform was slightly baggy, and he wore a skull cap that tilted part of the way off his head. He moved slowly and with a limp, but he somehow had a polished jump shot.

“Lock-up” is where an inmate is housed goes after violating the behavioral rules of the prison. In lock-up, privileges are few, social interactions could be fewer, but hours of sunlight can be salvaged.

According to Davis, the behavioral transition program the prison offers its inmates allows for times like these, which can ease a person’s mind and body significantly before they leave lock-up and go back into the general population.

“If you don’t get out from time to time your mind starts to crumble,” the inmate said.

He didn’t say how long he’s been incarcerated, or even what crime he committed. He insisted that his life and attitude behind bars mostly depended on his family and friends’ well-being.

“Long as they’re alright out there, I know I’m gonna be alright in here,” the inmate said.

Thore only had a couple hours of lock-up experience, he said.

But now he’s free —a walking example of someone who served his time for wrongdoing and isn’t likely ever to return inside.

“Mass incarceration is a problem everywhere in America, period,” Thore said. He said as part of his journey he learned how “unforgiving” America can be, and he hopes to live to see changes in the criminal justice system.

“I wish I could say all ended well with me, and maybe it will yet. Financial issues complicate our life, as I know it does for other families,” Thore said. “I’m grateful to have … what I do: a wonderful, beautiful wife, two smart kids, one in college, and a comfortable home in Forest Acres, relatively healthy.” 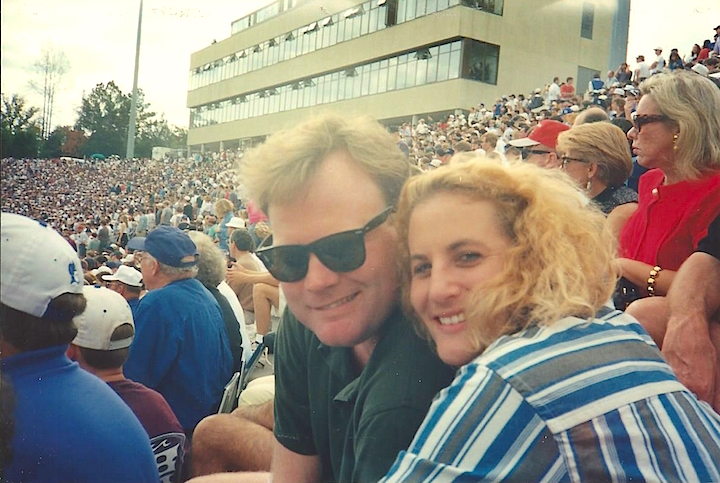 Jeff Thore, left, served a three-year sentence in a South Carolina state prison for a road rage crime. After his release, he was determined to stay out of trouble and live an exemplary life with his family. 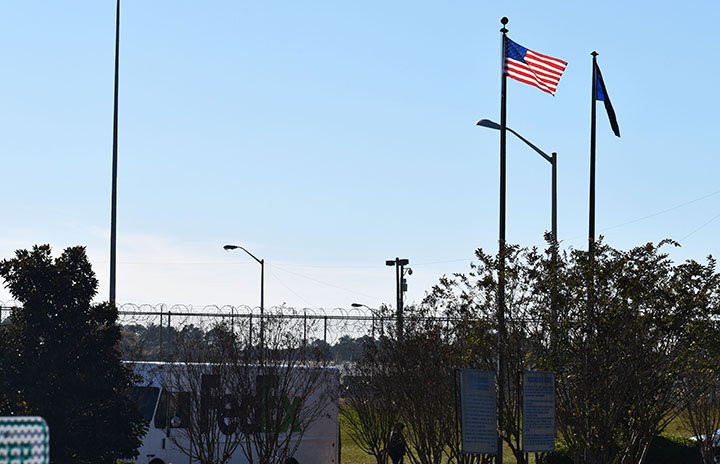 The flagpoles outside Kirkland Correctional Institution tower over the many acres of hills, agricultural land and prison buildings at the South Carolina Department of Corrections’ Broad River road campus in November, 2018.