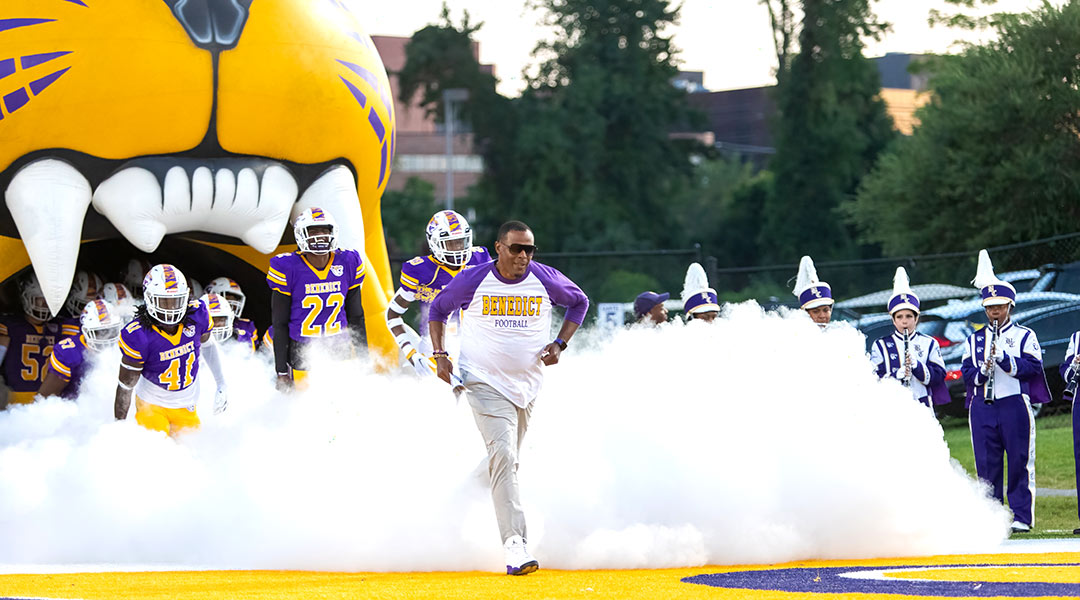 Benedict head football coach Chennis Berry has a 15-5 record in two seasons with the program. (Photo courtesy of Dennis Switzer)

In Benedict College’s team meeting room, there are motivational messages plastered on the walls. One of Chennis Berry’s favorites is “Your BEST is the STANDARD!”

Berry, the school’s second-year head football coach, requires excellence. If his players aren’t doing a drill right during practice, he makes them start over.

“That’s just the demand that I have — my level of expectations are not going to change,” Berry said. “I want their best because I know they’re a very talented group.”

The players have bought into Berry’s philosophy. Benedict is 10-0 — ranked No. 12 in the country. A 54-21 win over Allen University on Saturday gave the Tigers their first undefeated regular season in program history.

“It’s awesome seeing the stands are a lot more filled than they were last year,” said junior defensive end Loobert Denelus. “The community is kind of behind us. It’s a good thing to see that we’re bringing a more loving community to Benedict College.”

It wasn’t always that way, though.

Junior quarterback Eric Phoenix was a freshman on that team.

“We were a good and talented team — we just didn’t finish in every game,” Phoenix said. “Now, we’ve just put it all together.”

Berry was hired in February 2020, a month before COVID-19 began, and the Tigers’ season was canceled.

Benedict went 5-5 last year, hindered by injuries and a pair of losing streaks. But the momentum started to shift when the team won their final two games.

“When we were fully healthy, no team could stop us,” Phoenix said. “We manifested that all offseason saying, ‘All we got to do is stay healthy, and I promise you, this year will be special.’”

Phoenix wasn’t wrong. Benedict’s offense is averaging 36.3 points per game. A big reason behind the outburst has been Phoenix’s development. He threw 12 touchdowns and 10 interceptions in seven games last year. This season, he has limited his turnovers, again posting 12 touchdowns but throwing only three interceptions.

“He’s been doing a great job of taking care of the football and managing the offense,” Berry said. “He can make plays with his arms and feet, but he understands to take what the defense gives us. And he’s been doing a better job of that.”

Defensively, the Tigers are one of the better units in the country. They rank sixth in total defense, allowing 11.1 points per game and forcing 22 turnovers.

Denelus, who has made 44 tackles and recovered three fumbles, said the team is playing great in all three phases: offense, defense and special teams.

“When one is down, other phases help pick it up, and when we’re down, the offense helps us out,” Denelus said. “So, I think we’re all working together.”

After Wednesday’s practice, Berry reiterated the theme of going 1-0 every week. It’s something the team took from reading “Chop Wood Carry Water: How to Fall in Love with the Process of Becoming Great,” by author Joshua Metcalf, during summer training camp.

“We just go one day at a time — we just want to win today,” Berry said. “If we feel like we win the day, we continue to stack positive days together.”

Win or lose, there are four things that Berry tells his team to do before every game: play with more effort, create turnovers, limit penalties and make explosive plays.

“That’s the mantra we have every week when you come into our team meeting room,” Berry said. “The things that I talk about are things that are embedded in the program. It’s not something that I had to drive home to them every week. So they understand the mission. … We don’t have goals, we have missions. And our mission is to go 1-0 every week.” 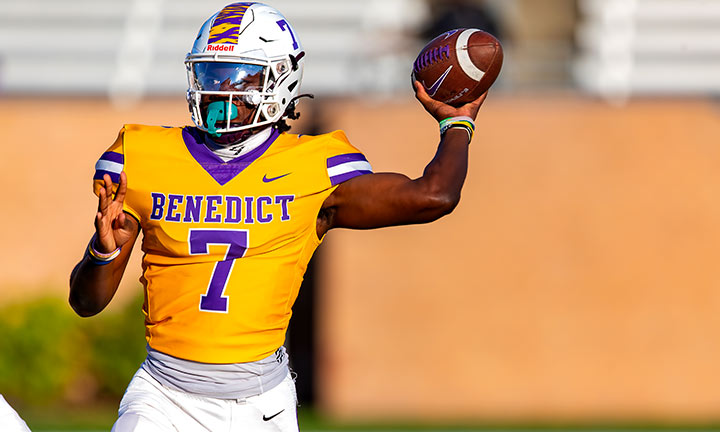 Junior quarterback Eric Phoenix has thrown for 1,439 yards with 12 touchdowns and three interceptions this season. He also has run for 128 yards and scored three touchdowns. (Photo courtesy of Dennis Switzer) 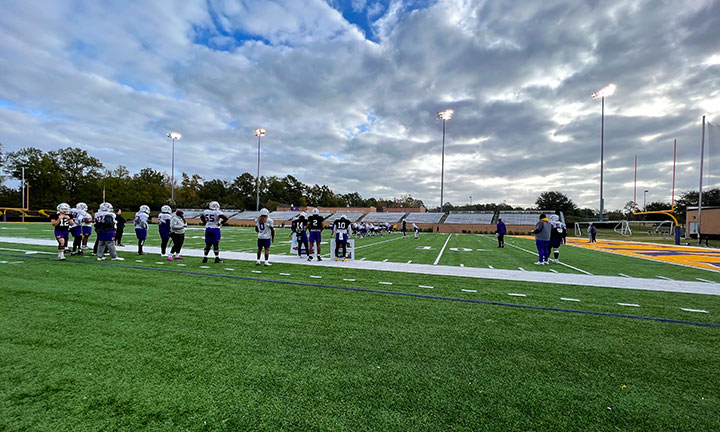