Derrick Hearn, a fourth-grade teacher at A.C. Moore Elementary, wants his young students to understand that black men can be teachers too.

“A lot of times students just don’t have that teacher that looks like them or can connect with them and ultimately help change their education experience,” said Hearn.

According to the U.S. Department of Education, only two percent of the teachers in the United States are black men.

This statistic leads to many African American students not seeing educators who look like them at the front of the classroom.

In South Carolina, the public school system is expected to have about 49,000 teachers, but only a little over 1,000 are black men, according to the South Carolina Department of Education.

Waylon Gibson, a fifth-grade teacher on the same faculty with Hearn at A.C. Moore, believes black men will re-enter the education career field if some changes are made across the state and the nation.

If black men continue to enter into the education system they will have an overall positive impact on the students across the nation, Gibson said.

Jennifer Clyburn Reed, director of the Center for the Education and Equity of African American Students at the University of South Carolina, said low diversity statistics within the state are not helping the overall growth of the educational experience for the children in the public school systems. Changes in diversity levels could have a ripple effect in the classroom.

“Students that see themselves with someone who looks like them at the front of the classroom have a 36 percent less chance of dropping out,” said Reed. “Discipline also falls so you are looking at two major entities, negative entities, that we could eliminate if we just diversify the teaching force and I think that is worth doing.”

Reynard Jefferson, the assistant principal at Burnside Elementary, said although teachers make less money than many other professions, teaching is a profession that creates the foundation for many opportunities.

“It is still important that they see teachers of all faces, of all facets, said Hearn. “And not just African American teachers, just teachers of different cultures that can actually expose them to those different backgrounds, personally as they matriculate through their education.”

Within the state of South Carolina, there are many programs to get black men involved in a career in education. They include the Call Me Mister Program that originated at Clemson University and the Apple Core Initiative at the University of South Carolina. 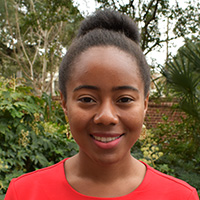 Ashten Latta is a native of Greenville, South Carolina. She enjoys helping her community through service and education. Recently, Latta had the opportunity to experience her passion for the community through internships with a local State Farm agent and the Ronald McDonald House Charities of the Carolinas. Through these opportunities she has learned how to write stories and develop relationships throughout the community. Her plan is to pursue a career in broadcast media to connect and educate the community.