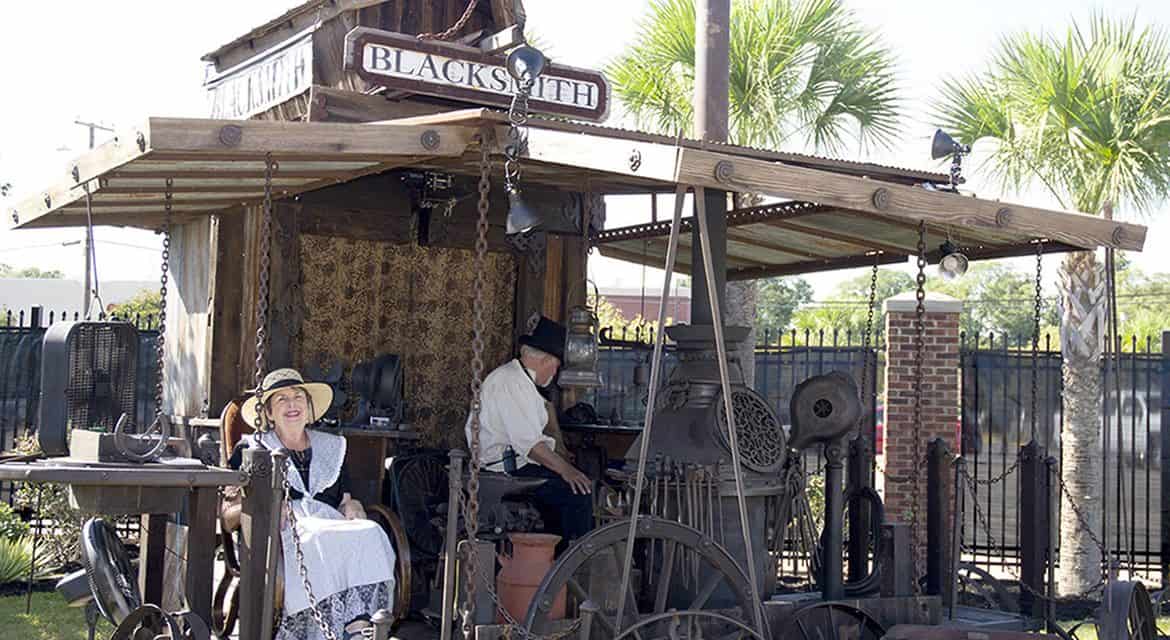 This is the fifth year that Marvin and Beverly Gardner of LaGrange, Georgia, have set up their Rust and Flame blacksmith shop at the South Carolina State Fair.

As you walk into Heritage Village at the South Carolina State Fair, visitors are greeted by the sound of clanging, heat from a forge and the smell of burning coal.

Marvin Gardner wipes beads of sweat off his forehead as he heats up a small metal rod in the forge. Once the rod reaches a red hot temperature and emits an orange glow, Gardner uses a rounded hammer to shape the rod into a tiny horseshoe. The horseshoe is a reminder of 18th and 19th century life in the United States when the horse and buggy was the main mode of transportation for ordinary people.

“These tiny horseshoes are all we make at the fairs to allow the people to see how they are made. Once the horseshoe is shaped they can have anything they want punched into it from their name, nickname or anything really,” Gardner said.

As Gardner is creating the small horseshoes he explains to the crowd what horseshoes are used for.

Sandre Probst watched the demonstration and found Gardner’s Rust and Flame blacksmith shop intriguing. He and his wife Beverly have been traveling up and down the East Coast for the last 10 years to different state fairs and events to show people the art of blacksmithing.

“We were in the building and I told my friend Norma, ‘lets go out here,’ because it did fascinate me,” Probst said. “I like to see how people lived way back.”

Probst’s friend, Norma Donaldson-Jenkins was also interested in the exhibit and had the opportunity to become Marvin’s apprentice. She turned the knob on the bellows and observed how Gardner creates the tiny horseshoes.

“Anyone who works with fire, metal or glass – I love to see it. And when Beverly said we get a chance to play with it too, that’s what really interested me. It was really fun and he is a really good instructor,” Donaldson-Jenkins said.

Marvin Gardner, of LaGrange, Georgia, has been blacksmithing for over four decades. The 76-year-old Gardner began his career as a school teacher in Arizona before he picked up blacksmithing as a hobby in his 30s.

“Things got stressful for me so when I’d get home from school, I would go to the little shop I had behind the house and start pounding on stuff and making things by sculpting with a torch,” Gardner said.

Folks around town took notice of Gardner’s new hobby and wanted him to sculpt things for them.

“The next thing I knew I was getting orders. To make a long story short, I quit teaching school and opened up a blacksmith shop.”

Gardner said his blacksmith shop did well for a while. But, after attending a family reunion in Arizona an opportunity was brought to him that he couldn’t resist.

“I had a cousin that was doing special effects in motion pictures and he saw my brag book and he said to me, ‘Hey man. if I get a film with some metal work in it, want to come to Hollywood?’ Gardner said. “My wife I had at the time said, ‘If you call him, I’ll shoot you!’ She didn’t shoot, he offered me enough money it was intriguing to her. So, for the next 13 years I worked in Hollywood.”

In his 13 years in the movie industry Gardner worked on special effects for films like “Jurassic Park,” “Toys,” “The Untouchables” and “The War” featuring Kevin Costner. While filming “The War” in Georgia, Gardner said he met his second wife, Beverly, and has stayed in Georgia for the last 26 years.

“I had a friend that sponsored an Indian powwow and he convinced me to set up a blacksmith shop at the powwow, and they paid me so I thought this is cool, I could do this,” Gardner said. “Then I found out about fair associations and we got booked for six fairs that year.”

The following year the couple doubled the number of fairs they booked the previous year.

Though blacksmithing may be considered a lost art to some, Gardner disagrees. Today, Americans have access to materials like plastics and resins that are lighter and stronger than the metals used in the 18th, 19th and 20th centuries. These materials are also cheaper which put blacksmith shops that were once in every town out of business.

“In the ’70s a group called ABANA, Artist-Blacksmith’s Association of North America, started building it up, this group with chapters all over America, allowing blacksmiths to practice everywhere. So, if someone gets interested in blacksmithing there is a ready-made library of information that they can learn from.”

The Gardners will be forging personalized horseshoes and educating spectators about blacksmithing at Heritage Village near the famous rocket at the State Fair until Oct. 20. 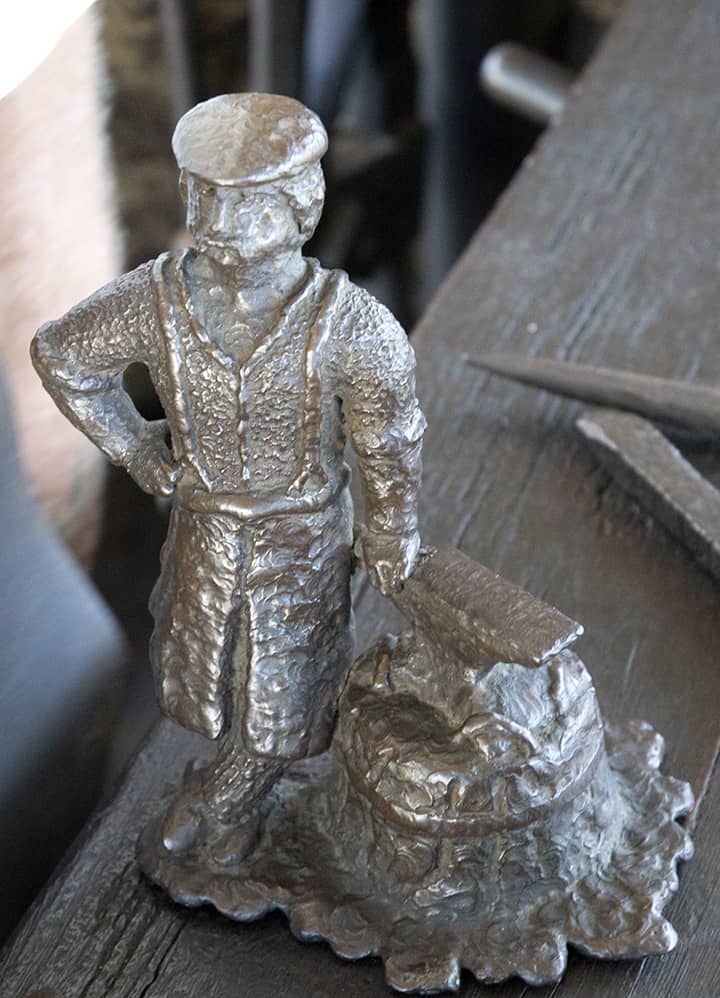 “This is the first piece I ever made as a blacksmith,” Gardner said. 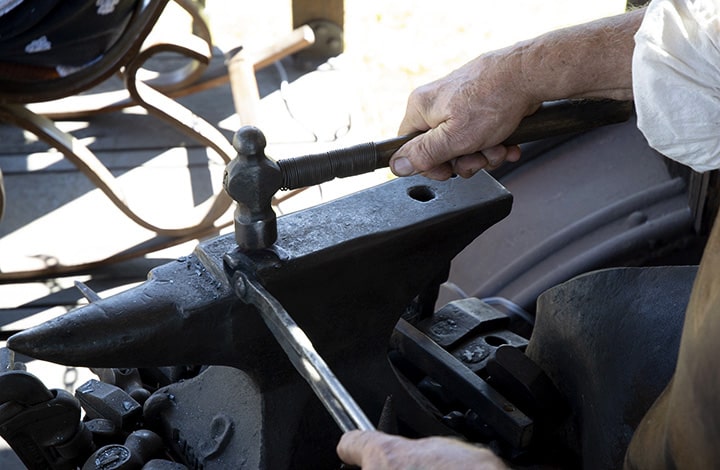 Marvin Gardner shapes a hot steel beam into a horseshoe. 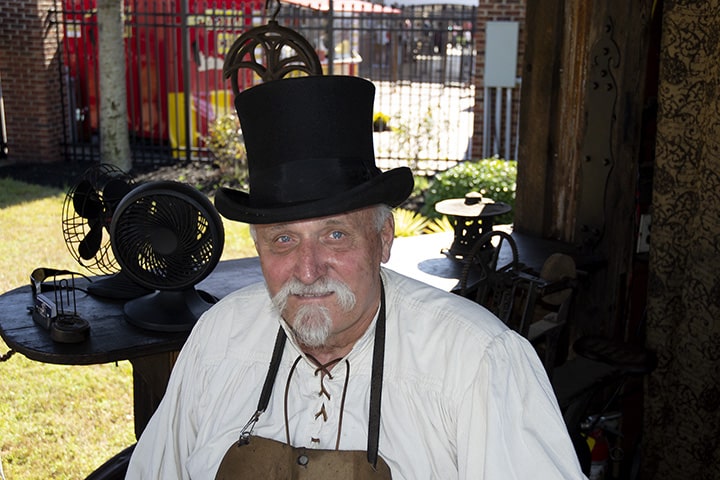 Marvin Gardner, 76, said he picked up blacksmithing as a hobby after his job as a school teacher became stressful. 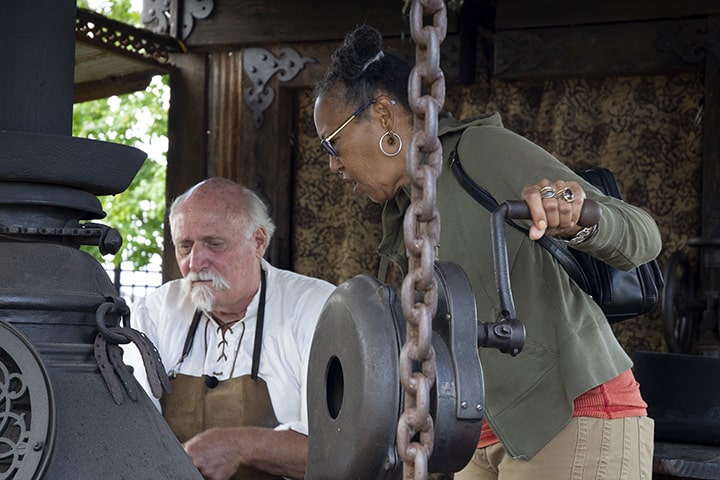 Norma Donaldson-Jenkins, a State Fair visitor, turns the knob on the bellows, pushing air into the forge. 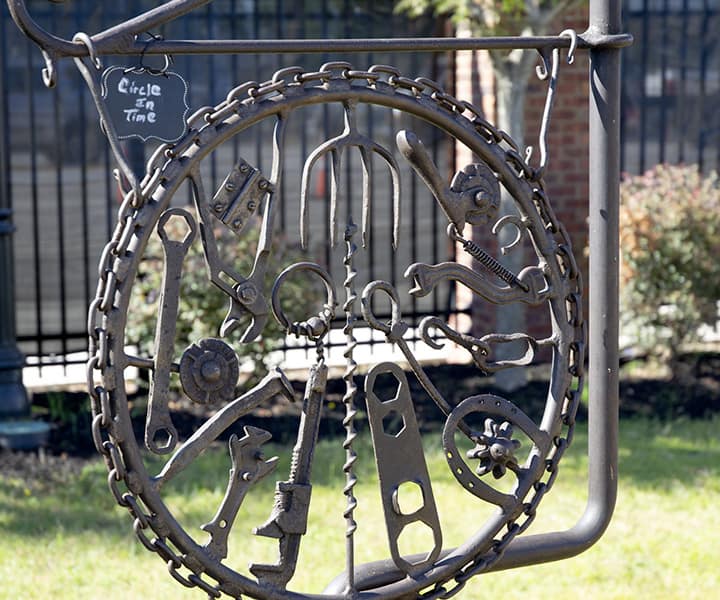