Built for loud: Carolina Band prepares for centennial season amid a pandemic 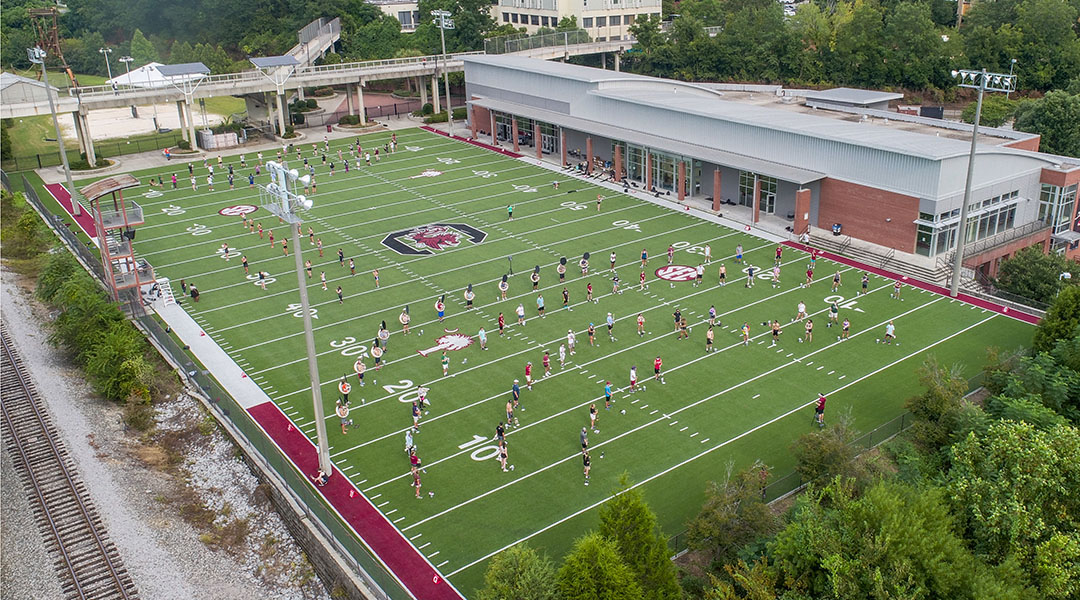 The Carolina Band rehearses at the band practice field Aug. 20. The over 300-member band has split up into two groups this season to maintain social distancing. Photos: Tyler Beach

“The University of South Carolina is proud to present the Mighty Sound of the Southeast, your Carolina Band!”

In one week, a crowd of 20,000 fans at Williams-Brice Stadium will hear a stirring drum roll and the public address announcer start the marching band’s pregame show for the first game day of the 2020 football season.

The COVID-19 pandemic has drastically changed how the Carolina Band is preparing for game day, but band members and leaders say they hope to create the Gamecock spirit even though they are not allowed to march on the field in celebration of their 100th-year anniversary.

Fourth-year trumpet section leader Livi Crowell said she will miss the chills from marching on the field during pregame and being physically closer to her band family.

“I got that rush of looking around and seeing 80,000 people looking at you and actually caring about you,” Crowell said. “I also can’t lock arms with my family after the game when we sing the alma mater as a band.”

The South Carolina Department of Commerce approved the athletic department’s plans to reduce fan capacity from 80,000 to approximately 20,000 fans.

Second-year band director Jay Jacobs said he does not think an abnormal game day atmosphere will affect the band members, who proudly circulate the hashtag #BuiltForLoud on social media.

“Regardless of the situation or what the score of the game is, these students bring an exceptional level of energy and enthusiasm to what they do,” Jacobs said. “They just bring it to every rehearsal and every performance.”

Band members normally rehearse nine hours per day during band camp in August. This year, social distancing guidelines required the 300-member band to split into two bands for the season, the Cocky Band and the 2001 Band, and reduced rehearsal time to under three hours.

Other sections of the band, such as the Carolina Coquettes, color guard, drum line and feature twirlers, were divided among the two bands.  The three drum majors are the only students who perform with both groups, according to drum major Kelley Powell.

After band camp ended, rehearsals began with two days per week for each group.

Each band member is required to check his or her temperature and fill out online health surveys daily, according to graduate assistant athletic trainer Megan Grace.

Most band members complete the temperature check and survey prior to arriving at rehearsal, unless they do not own a thermometer.

“When they complete the survey, they receive a score,” Grace said. “That tells us if they would be allowed to rehearse or if they need to be sent home. When they get to rehearsal, they have to show us the confirmation on the screen from the survey.”

The Cocky Band and 2001 Band will remain separated throughout football season to limit social interaction.

For the first home game against Tennessee on Sept. 26, the Cocky Band will perform the pregame show, first half and halftime show. Though the timeline is not certain yet, the 2001 Band will arrive at some point in the first half and switch out with the first group to perform in the second half and postgame.

The two groups will alternate who performs first. For the second home game against Auburn, the 2001 Band will be in the stands for the first half.

The Carolina Band will also have to use an extra section of the stadium to allow for social distancing, despite only having half of the members present at one time.

Given the dozens of guidelines required by the SEC, Jacobs is pleased with the communication efforts between the university and the Carolina Band.

“I’m exceptionally grateful to the administration and everyone who has helped us meet our guidelines and procedures,” Jacobs said. “From athletics and student health services to our athletic training staff, everyone has been great.”

Even though the band plans to bring high energy into the stadium, the components they miss of a normal season still remain.

“I have some friends in the opposite band group, and I wasn’t even able to see them at band camp,” Ecker said. “There are also some freshmen in my clarinet section who I haven’t seen in person yet.”

Crowell said she will miss traveling to away games, which is not allowed under this season’s SEC guidelines.

“Meeting the trumpet members from the other schools is always exciting,” Crowell said. “Nearly every other school also has a chapter of my sorority. I will also miss hearing other bands. Kentucky did a really cool show in 2018 when we visited Lexington.”

Fourth-year color guard member Lauren Cunningham is trying to find a silver lining for this season, the band’s centennial year.

“I am disappointed that our big celebration will be different, but I started thinking about the world events past members have experienced within these last one hundred years,” Cunningham said.

The Carolina Band was founded with fewer than 20 members in 1920, two years after World War I ended. Past members have experienced other events such as the Great Depression, World War II, the Vietnam War and the Korean War.

“I think it’s a testament to the resiliency of our band and its members,” Cunningham said. “Just as it relates to this season, I see the pandemic as another one of those events that our band encountered. Our ability to have a positive impact on the game day experience, whether it’s with 80,000 or 20,000 fans, will not change.” 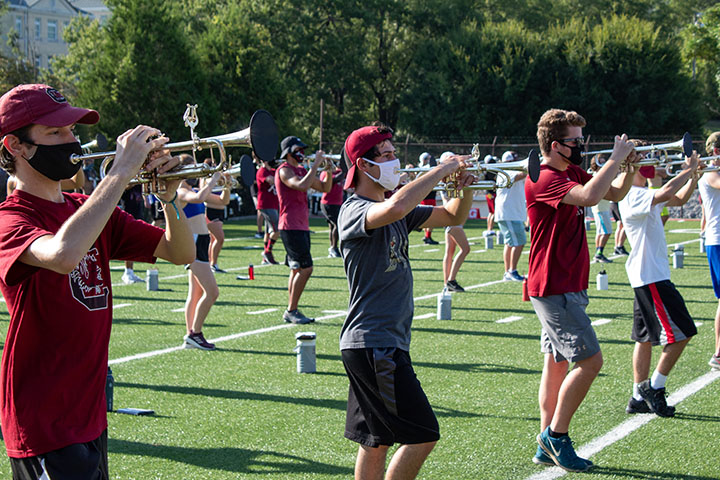 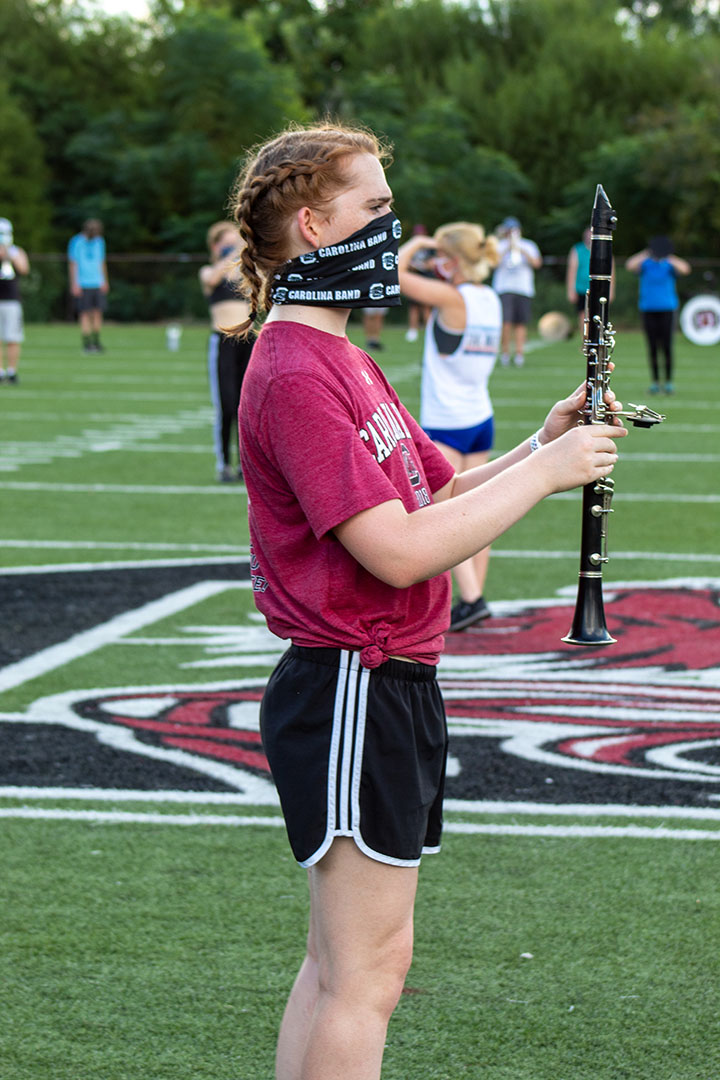 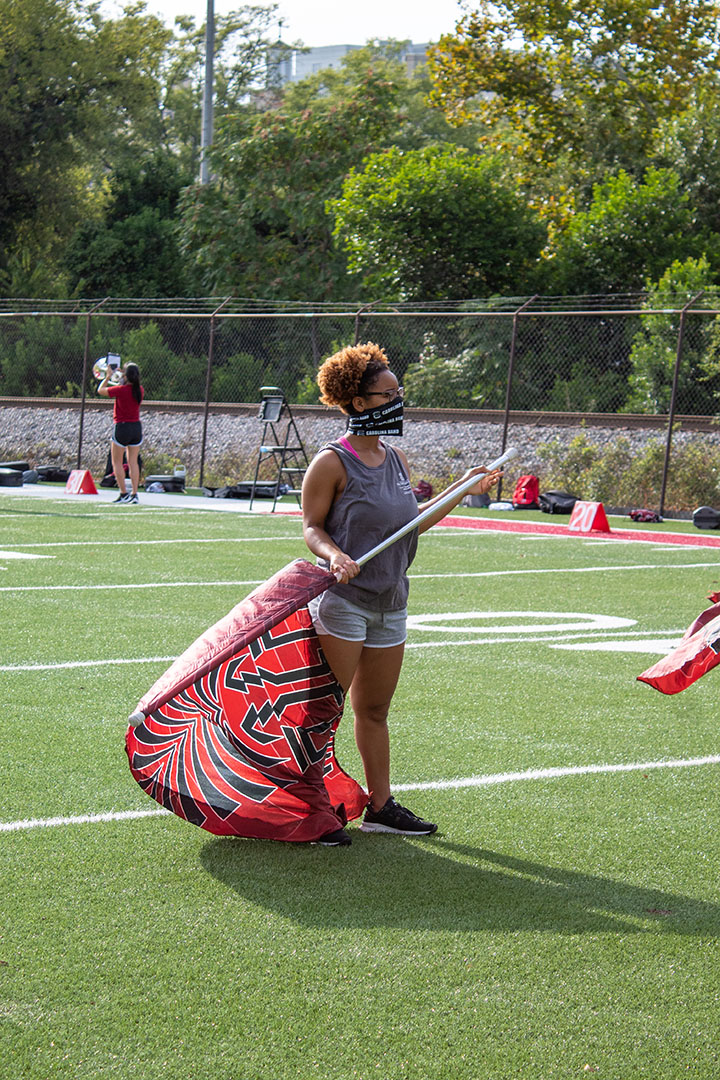 Colorguard member Kyra Edwards learns flag routines during rehearsal. The band will not be marching on the field this season. 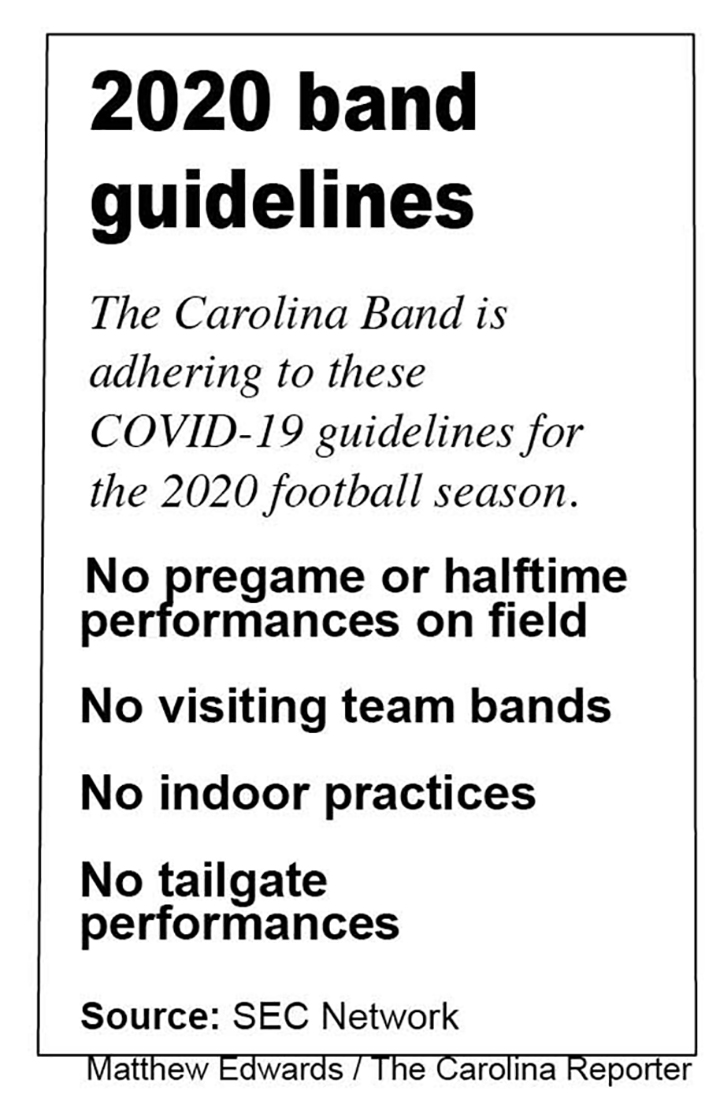