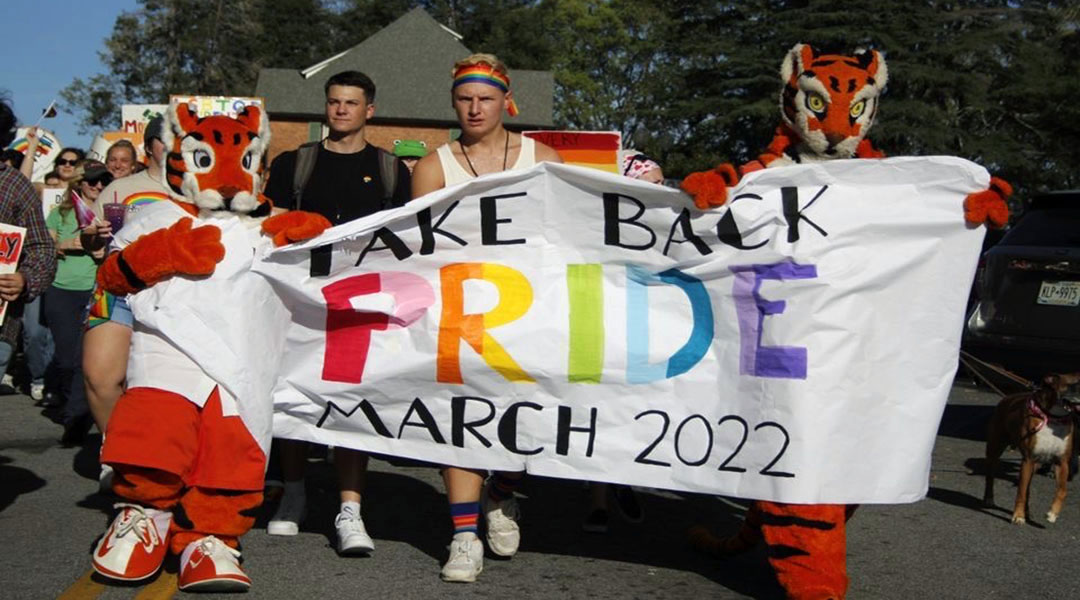 Clemson University students marched for LGBTQ+ inclusivity in the wake of a controversial social media post made by a Republican student organization.

At Clemson University this week, a tussle over free speech pitted the university against students who say some college Republicans crossed the line with an inflammatory post about a student-led drag show.

About 800 students marched across campus Thursday in support of the LGBTQ+community, which they say was maligned by the Clemson College Republicans.

The march started at Sikes Hall and spanned across campus, ending at Brooks Theater. Students were adorned with LGBTQ+ pride merchandise and held signs calling out the university administration for condoning the Clemson College Republicans’ derogatory claims.

In an Instagram post, the CCR described the drag show on Saturday, hosted by TigerLive, the university’s entertainment sector, was “chock-full of sexual degeneracy that spits in the face of the Christian population that currently attends Clemson University.”

The social media post went on to say “the event’s participants promote transgenderism and other deviant forms of sexual licentiousness.”

The post has garnered a large amount of backlash – there are almost 7,000 comments in opposition of the group’s statement – and an Instagram account and a petition with over 1,500 signatures was created to get the organization banned from campus. The university has said the organization’s comments are protected by free speech.

The statement chastised the university’s vice president of student affairs, Lance Christopher Miller, and included a video of him receiving a lap dance from one of the performers.

Miller sent out an email to the student body the following Monday addressing CCR’s comments, saying that students should be mindful when expressing viewpoints that could be deemed as “inflammatory” and “hostile.”

“Although we may not agree with individual viewpoints of choices, let’s be civil with each other,” Miller said. “Civility in all things is the Clemson way.”

In a statement to The Tiger, Clemson’s student news organization, the university’s Title IX coordinator Alesia Smith said that CCR’s statement is considered free speech because the university is a public institution.

Cole Bryant, a third-year political science student at the university and the former chairman of CCR, said he thinks the statement could be viewed as hate speech.

“It’s still transphobic, it’s still homophobic, and in my opinion, it still constitutes as hate speech,” Bryant said. “It’s an attack. It is a verbal assault on the entire LGBTQ community on campus – and at the end of the day, I feel like that warrants discipline.”

Bryant, a member of the LGBTQ+ community, resigned from his position with the college Republicans in August 2021. He said he believes the organization mistreated the university’s LGBTQ+ population through their degrading remarks.

“I felt it was almost a camouflage for myself because I was out and gay, and people knew that. But to an extent, I still was not an authentic version of myself,” he said. “Sort of like, ‘Okay, you’re gay, but this campus will accept you because you’re a part of a conservative organization.’ It was almost like a shield for me because I saw how other queer students were treated on campus that were openly not conservative, and I think that just filled me with fear.”

Joey Schirripa, a fourth-year communications major at Clemson, said that he doesn’t care that TigerLive hosted the drag show, but he believes progressive groups on campus have more privileges when it comes to reaching out to the student body than other groups, such as the Fellowship of Christian Athletes, that he’s a member of.

All Clemson students received about eight to 10 emails last week from TigerLive advertising the drag show and a few of his professors offered extra credit to students who went, he said.

Schirripa also said he believes the CCR should have a right to voice its opinion without facing consequences.

“I believe that everybody is totally entitled to their own opinion,” Schirippa said. “When it comes to the march, I don’t agree with that in the sense that I don’t think that anybody should try to silence anybody or disband any groups. I just think everybody should be entitled to the same rights that every single organization is given.”

Some students also think that the post did not reflect the views of the Republican organization as a whole.

“I heard somebody say that they attended one meeting after everything had happened and there were a lot of people in the club themselves that did not agree with the statement,” said Courtney Barrett, a fourth-year environmental and natural resources major at the university. “It was not a majority vote, it was probably just a few executive members.”

Barrett said she thinks the university is handling the situation in a non-confrontational way because many of its shareholders are Republicans along with much of its student body, but she still thinks action needs to be taken. 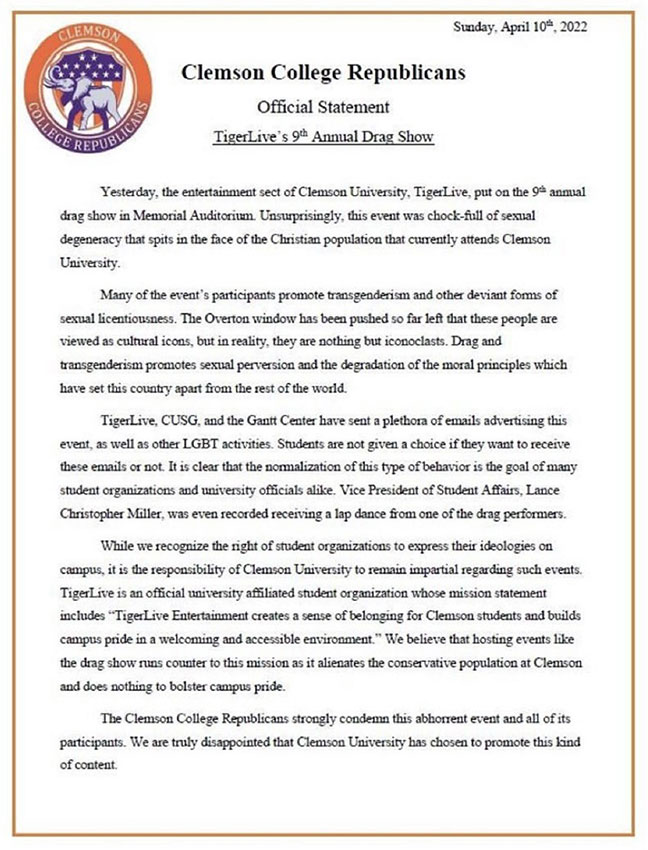 Clemson College Republicans posted this statement on Instagram about the student-led drag show. 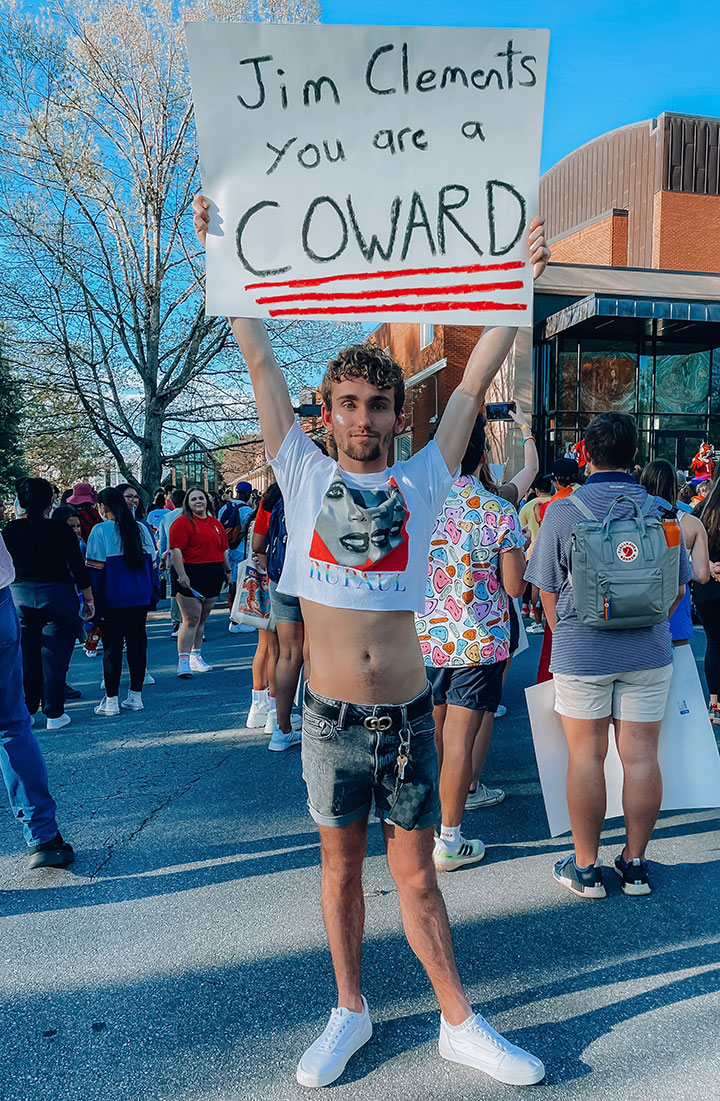 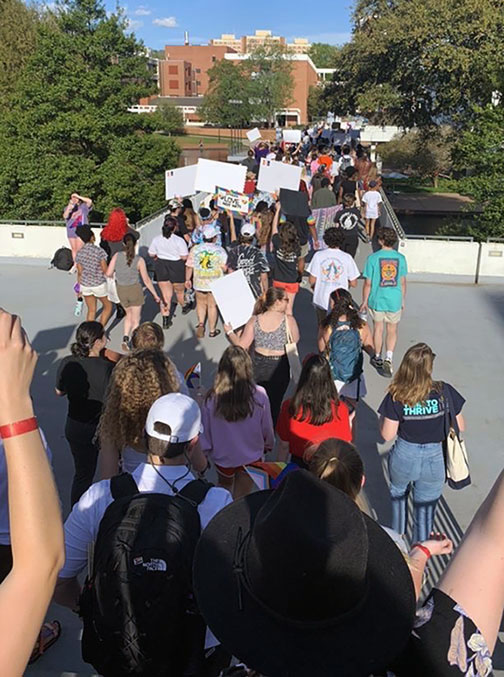 Hundreds of students and allies of the LGBTQ+ community rallied for a change in the university’s stance on transphobic and homophobic remarks by a student organization. Photo courtesy of Greyson Freeman. 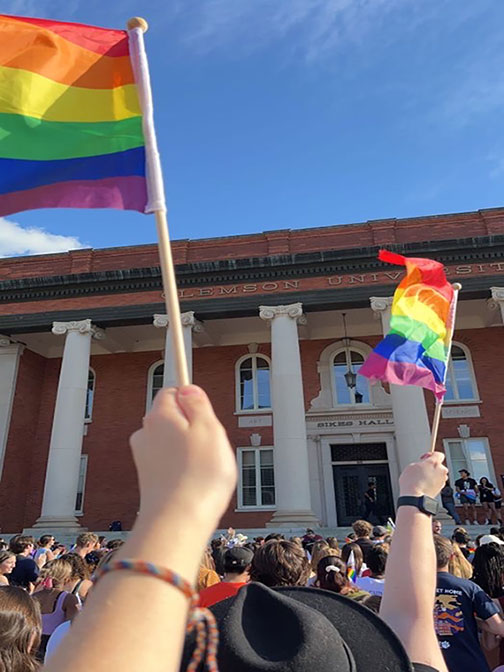 The march started at 5:30 in front of Sikes Hall, the university’s administration building. Photo courtesy of Zoe Van Kirk. 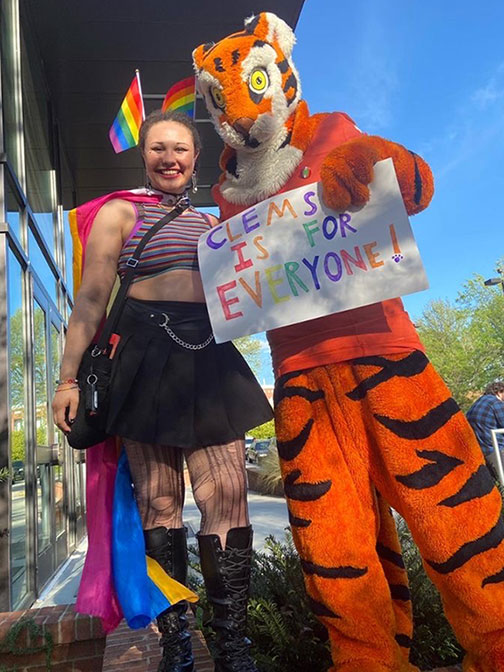