Clyburn swings his support to Biden 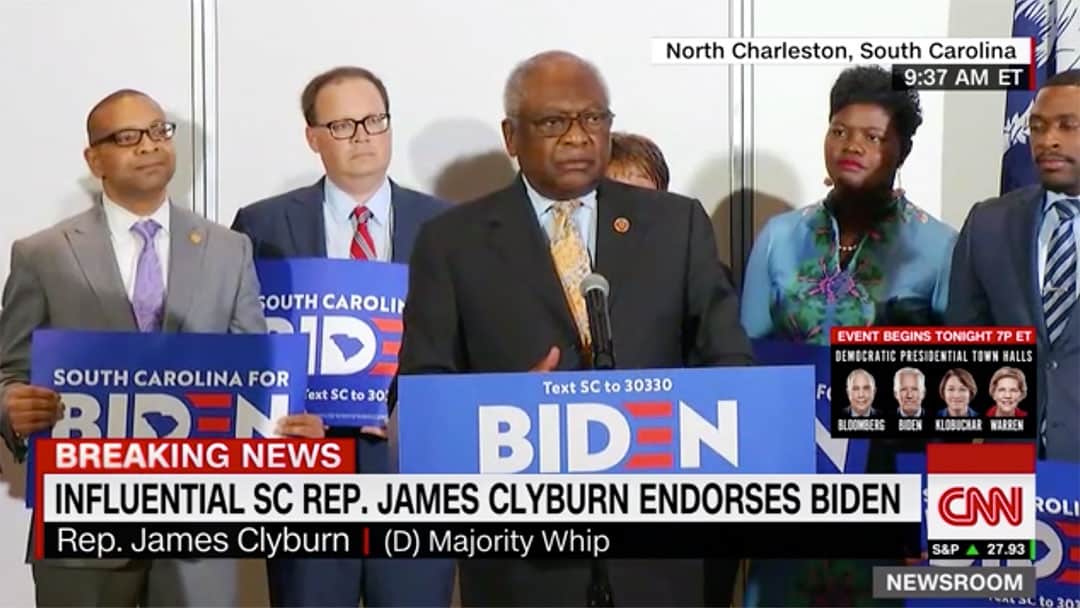 At a North Charleston news conference and in a video released by Biden’s campaign, Clyburn outlined why he’s supporting Biden in Saturday’s Democratic primary.

“I know Joe Biden,” said Clyburn, whose friendship with Biden goes back decades. “I know his character, his heart and his record. Joe Biden has stood for the hardworking people of South Carolina.”

The House majority whip’s high-profile endorsement could boost Biden’s performance in Saturday’s primary. More than 60% of voters in South Carolina’s Democratic primary are African American and Biden is still considered a favorite among minority voters, according to Winthrop University’s latest poll. But Vermont Sen. Bernie Sanders, who won the Nevada caucuses, and millionaire Tom Steyer have made inroads in the state and dented Biden’s once commanding lead.

Clyburn was emphatic in outlining what he believes is at stake for Democrats and for the country.

His endorsement came on the same day that two former South Carolina governors, Richard “Dick” Riley and Jim Hodges, urged South Carolinians in an opinion piece for The Post and Courier in Charleston to back a proven leader with the ability to defeat President Trump.

“It’s a simple choice,” the governors wrote. “Continue the madness begun in Iowa and New Hampshire and select a far-left candidate who guarantees Trump’s reelection and hurts other Democrats up and down the ballot, or choose Joe.”

With just three days to go before the Feb. 29 primary, Robert Oldendick, political science professor at the University of South Carolina, believes that Clyburn’s endorsement could carry a lot of weight because of how respected he is in South Carolina.

“He’s had the ability to reflect the opinions of the African American community and then translate that into electoral victories and then deliver,” Oldendick said. “He’s not just a member of Congress, but he is kind of a minority whip for the Democratic Party, which gives him access to resources and the ability to be a powerful figure that gets things done.”

Clyburn, also known as the kingmaker of South Carolina politics, is the latest of more than 180 influential supporters of Biden’s campaign in the Palmetto State.

Oldendick doesn’t think voters will see any other endorsements before Saturday’s primary.

“The endorsements that will happen have already taken place,” Oldendick said. “I don’t expect much more activity like that in the next 48 hours.”