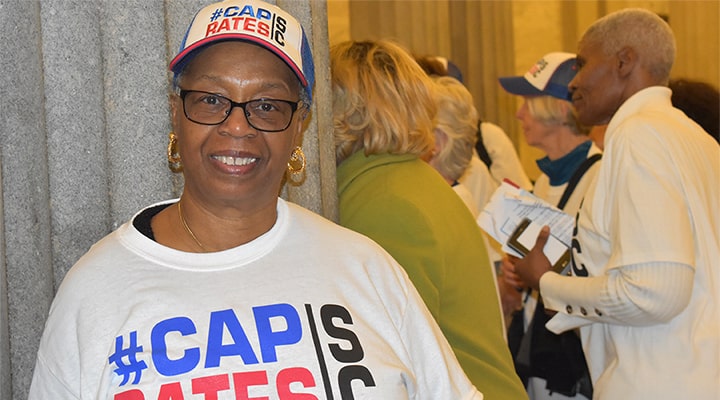 Patricia Aromi drove from Greenville to support the bill that would cap interest rates on short-term loans at 36%. “I am in support of fighting predatory lending,” said Aromi.

Outraged over the state’s lax laws on high-interest, short-term lending, supporters of a bill that would put a cap on interest rates united at the State House Wednesday.

Seven people spoke in favor of the legislation before the House Banking and Consumer Affairs Subcommittee. After the subcommittee meeting,  interest group leaders spoke to a crowd of supporters in the State House rotunda.

“The groups that are involved are the faith-based communities and also non-profits across the state that recognize that high interest loans are damaging and harmful to our citizens,” said Kerri Smith, coordinator for South Carolina Fair Lending Alliance.

The legislation would require short-term lenders to offer financial literacy courses before approving a loan, limit the annual percentage rate that can be charged and require lenders to ensure that they are offering loans on good faith that they can be paid back.

Supporters of the bill are fighting for a cap of 36% on interest rates in the state. Currently there is no cap and lenders can charge as much as they want, with some charging percentages in the hundreds.

Luke Crumbaker is the program manager for the Greenville Financial Empowerment Centers. The centers offer free financial counsel and savings plans for individuals. He’s seen many clients with interest-only payments and said that title loans, payday loans and even loans marketed as “credit builder loans” are common.

“I would like to see a tighter rein on this market, on this kind of unleashed industry that is effectively siphoning money out of our vulnerable communities,” Crumbaker said.

The bill is sponsored by six House Democrats and one Republican. Smith said growing support for the measure is “definitely a very promising development.”

Supporters of the bill aim to protect vulnerable citizens who get stuck in debt traps and also pump the money paid to high-interest rates back into the economy.

“It’s highway robbery,” Rafael Aromi of Greenville said. “Who gets stuck in that? People that don’t have nothing.”