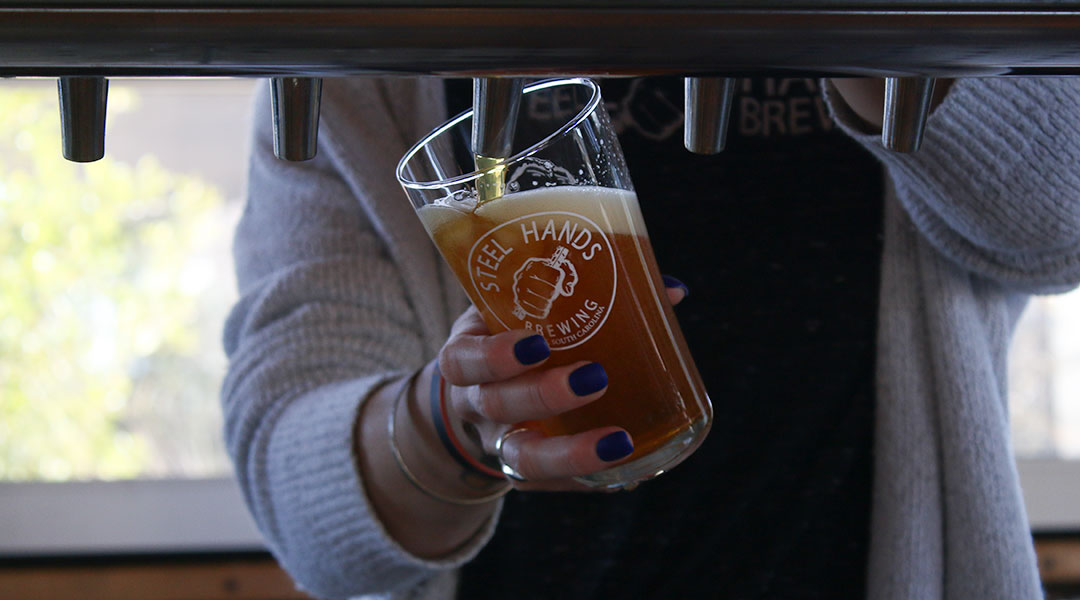 Steel Hands bartender Kacie Silver pours a glass of beer on tap. The brewery, located in Cayce, is one of over 100 in South Carolina’s growing industry. Photo credit: Christine Bartruff

With the January opening of Savage Craft Ale Works in West Columbia, the Midlands has more than a dozen breweries, a large increase from 10 years ago. But the state still lags behind other brewery powerhouses like North Carolina.

“You have to look at the demographics between Charlotte and Columbia,”said Scott Lambert, owner of Steel Hands Brewing, a Cayce establishment located about a five-minute drive from Savage Craft.  “Those breweries have been around for a long time and it’s still early for us. You have to produce quality beer.”

In South Carolina, breweries have limits on how much to-go beer they can sell, along with distribution regulations and a higher excise tax – the 7th highest in the nation, Bristow said. States like North Carolina don’t have these kinds of regulations.

“That makes a big difference overall,” Bristow said. “That’s probably why you’ve seen breweries like Sierra Nevada, New Belgium, and Oskar Blues, like these big national breweries, go to North Carolina, because good tax treatment and better laws like that makes for a mixture, a good deal for them versus coming to South Carolina.”

Because of COVID-19, the state Legislature has increased the amount of to-go beer breweries can sell to 576 oz., which translates to two cases of 12 oz. cans per customer per day. Gov. Henry McMaster also loosened restrictions on curbside pickup, but these changes are temporary, The State reported.

“We are able to package and distribute our beer at this location. The state allows us to sell a certain quantity just out of the window,” said Lambert.

South Carolina also has some advantages compared to other states, there are fewer regulations on new beers for breweries here, Bristow said.

The growth in the state’s brewery industry is largely due to regulation changes, Bristow said. If the state keeps “modernizing some of these laws,” he thinks the industry will continue to grow. The State House has allowed for looser restrictions on selling to-go beer and built in some relief for smaller breweries during the pandemic.

“If we don’t… I think they’ll still have people opening breweries, but there will come a point where, like I said, where growth I think is going to kind of dry up in a way,” Bristow said.

Other Columbia brewery owners are excited about the recent openings and growth in Columbia brewing, saying it helps boost the industry as a whole.

Columbia Craft, a brewery on Devine Street, frequently creates new beers for customers, Rachel Hobson, a bartender, said. “There are not many breweries on this side of town, especially in the middle of campus,” Hobson said. “Parents and college students stop by here often. It opens up an option for brewery hopping on this side of town. It’s good and brings us all together.”

While COVID-19 brought beneficial regulation changes for breweries, it also brought a number of challenges. Columbia Craft has to significantly reduce indoor seating and lost some of their regulars, Hobson said.

“We lost all of our bar seating and our regulars are upset about that. They will come in and leave when they see we still haven’t added chairs,” said Hobson.

COVID-19 also stalled progress on the construction of a new outdoor patio that could hold up to 100 people and a rooftop at Columbia Craft.

“We started the rooftop and it was supposed to be completed by spring of 2020, but obviously COVID hit. It’s been hard with losing tables and the construction. I believe we are still one of the only bars with Plexi-glass,” Hobson said.

Steel Hands created an extra outdoor patio and allowed local bands a place to perform, drawing in more customers during COVID-19 restrictions. Lambert said he loves the idea of more breweries opening in Columbia and increasing awareness about the impact of breweries.

“Once we have good, consistent beer then the awareness of breweries in Columbia will grow. Then it will become a focal point for people to travel to,” said Lambert. 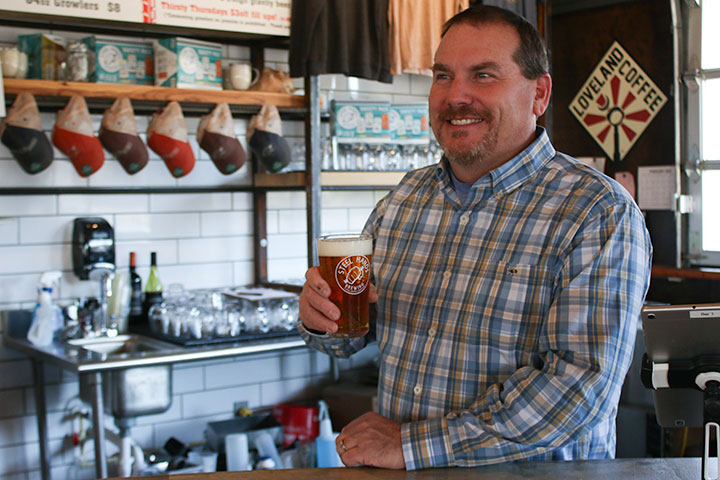 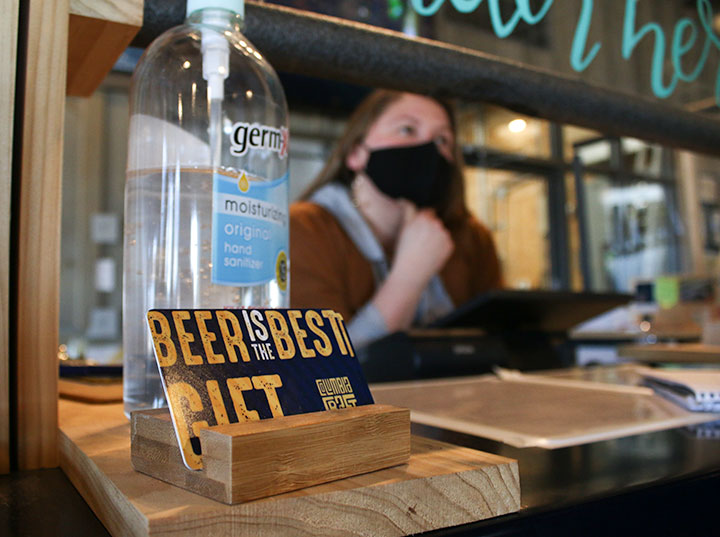 Bartender Rachel Hobson, who has worked at Columbia Craft for two years, said it had to reduce indoor seating due to COVID-19, causing some regulars to go elsewhere. Photo credit: Christine Bartruff 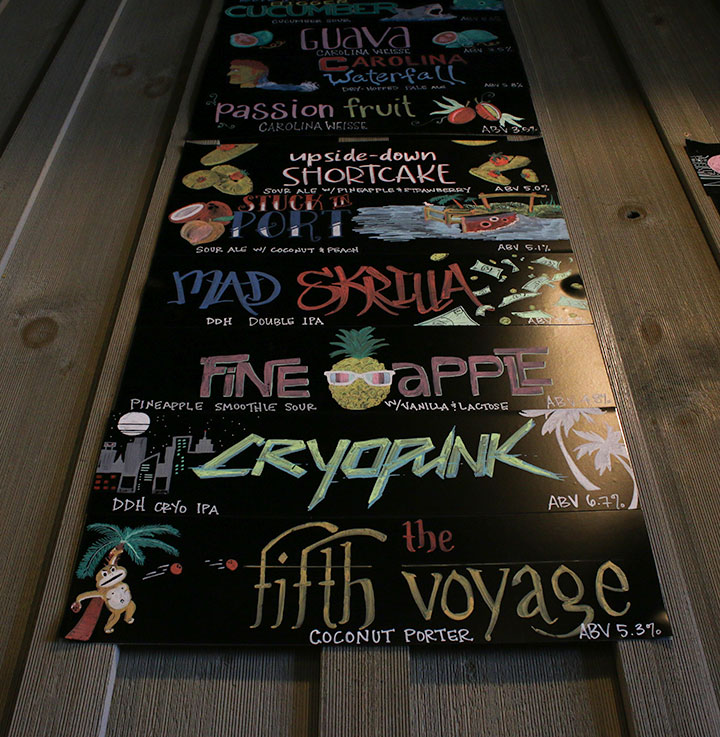 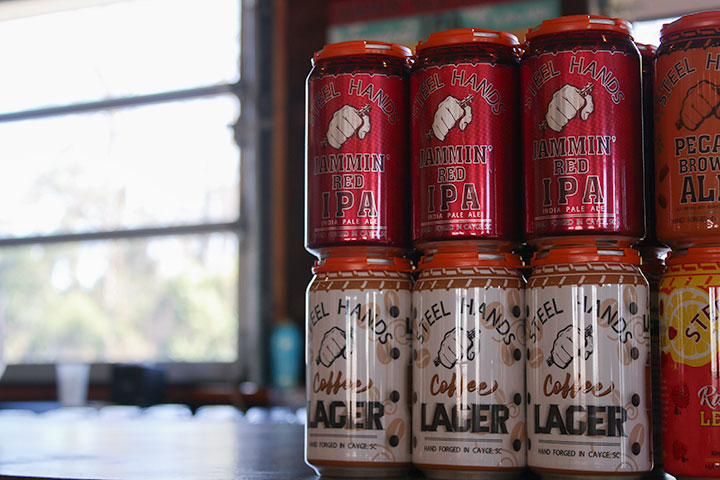 Two of Steel Hands’ craft beer offerings include the Jammin’ Red IPA and the Coffee Lager. Lambert said the brewery was able to utilize its outdoor space to abide by COVID-19 restrictions. Photo credit: Christine Bartruff