Columbia family is destined for Disney despite park price hikes 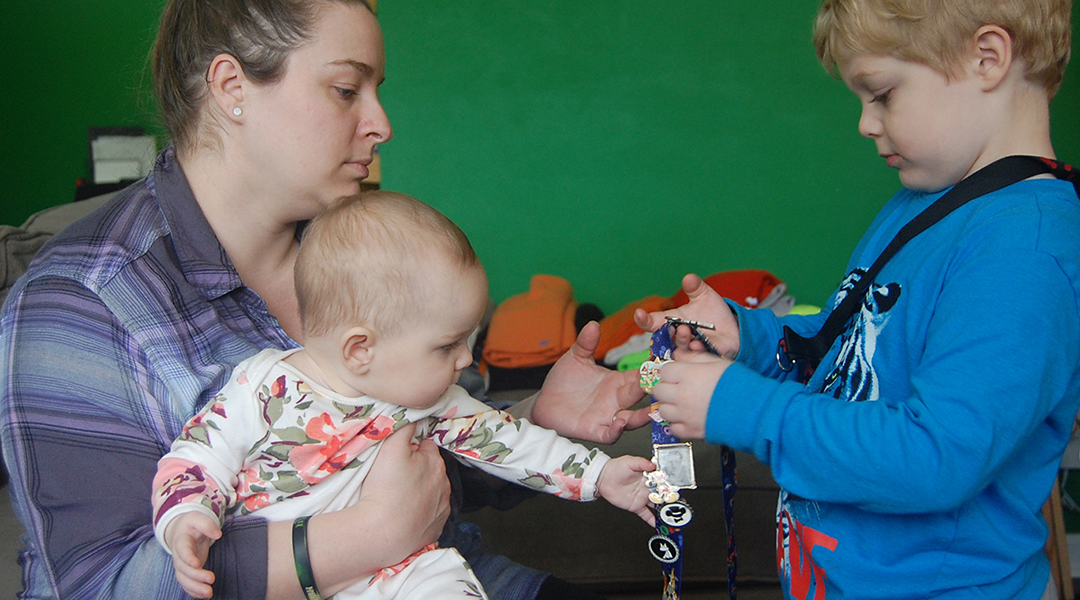 Ashley Mills explains what each Disney pin on her lanyard means to her son Elias. The Mills family collects a pin each time they visit the park and has even started a lanyard of pins for Elias. 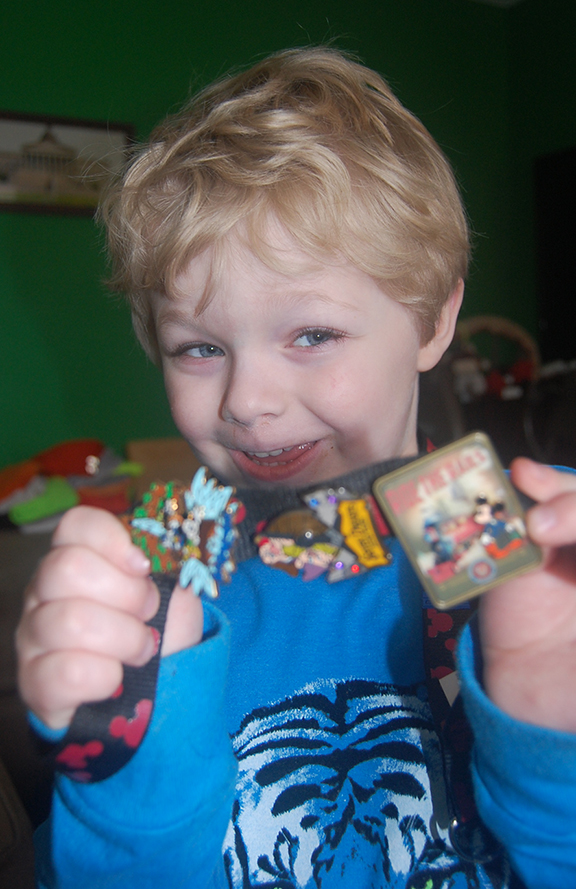 Elias Mills showed off the pins he’s collected at Disney World from the annual trips his family has made since he was just one years old. 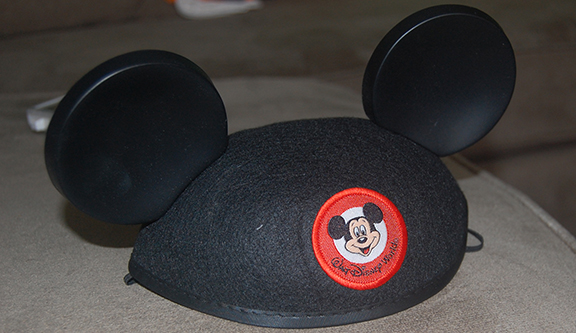 The Mills family has made the trip to Disney each year since Elias, the oldest child, was one. He recieved this set of Mickey ears when he got his first haircut at the park. 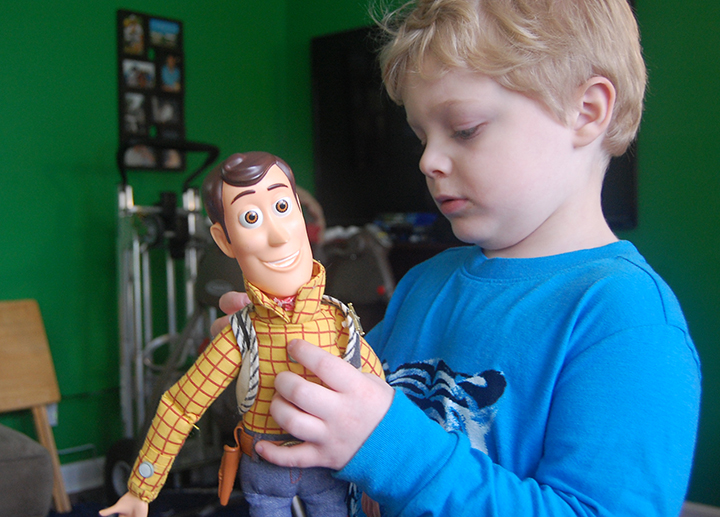 Five-year-old Elias Mills plays with one of his favorite toys from Disney World, Andy from Toy Story. His mom, Ashley Mills, said she’s excited for him to visit Toy Story Land after it opens at the park this summer. 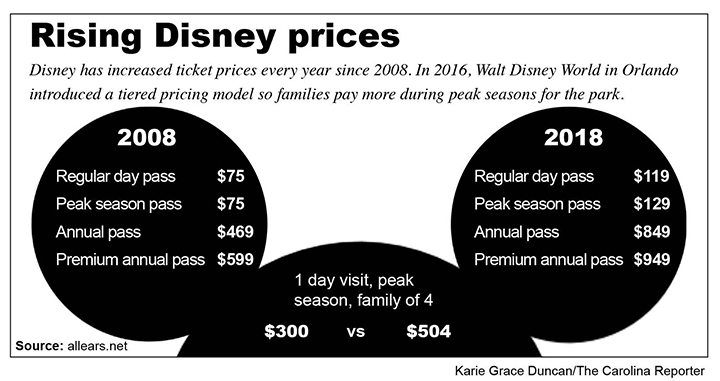 The magic of Disney just got more expensive, but the ticket increase that took effect Feb. 11 won’t stop the Mills family from making their annual visit.

“The first moment that you walk into the Magic Kingdom, just that first glimpse, it’s one of those forget-all feelings,” said Ashley Mills, a lifelong Columbia resident.

Mills has been going to Disney World in Florida with her family since she was a child. Now, she and her husband Tracy are continuing that tradition. They have taken their 5-year-old son to the Magic Kingdom since he was 1.

Now, with a new 7-month-old child in tow, the family of four will make the trip to Disney this spring despite an increase in ticket prices.

Families will now pay a higher or lower price depending on the season. Prices for tickets on peak season days increased by $5 to $129. Regular tickets are up $4 to $119, and value tickets, for less busy days at the park, are up $2 to $109.

“For us, it’s kind of expected. It’s like inflation with everything else,” said Mills. “The main thing that I usually notice is when the parking prices go up.”

Those parking prices did go up again with the February ticket increase. Parking per car is up to $22 a day from $20, and preferred parking is $45, up from $40.

Mills says she understands that ticket prices increase in order to help spread out park attendance throughout the year. That’s why Disney introduced tiered ticket prices in February of 2016.

“We’ve been there before when they’re turning people away because they’re at park capacity,” said Mills.

All of these price increases come just before Disney opens new rides and attractions this summer including The Incredibles “SUPER” Dance Party and Toy Story Land.

“I’m really excited about Toy Story Land. My son’s going to have a fit with that,” Mills said. “There’s one Toy Story ride there now and it’s always the longest line in the park starting at 8 a.m.”

Something that Ashley Mills says never changes about Disney for her is the over-the-top customer service. She and her husband experienced the best of that service when they were planning their wedding at Disney. Her husband lost his wallet, which included their money and annual pass, on a ride.

“Guest services instantly gave us a three-day pass to hold us over while we were there, but they had gotten the wallet off the ride so fast that it was already in limbo to get to guest services,” said Mills. “We were walking out of the park to leave, sad, and out comes running this lady in heels and a skirt hauling butt after us because she had the wallet.”

The annual pass that the Mills family luckily got back that day was a wedding gift from Disney. They spent a lot of time at the park during the planning of their wedding, which Mills says was everything she could have dreamed of.

“A lot of people have a lot of misconceptions about Disney. They think money,” said Mills. “But they try to make things a lot more personal than people realize, and it’s not just Mickey. It was very elegant. There’s a lot more to it than just a cartoon.”

Although a lot of things have changed at the park and in Ashley Mill’s life since she started going to Disney as a child, her favorite park experience hasn’t: the fireworks. Now, she can share that glorious experience with her son.

“These last couple trips, seeing him see it and seeing how amazed he is, being able to share that with him, that’s probably the most favorite memory for me,” Mills said.

In order to keep sharing that experience with her family, Mills plans their Disney trips three months in advance, saving money to splurge on whatever they want while there.

She hopes Disney will continue to be a family tradition for her daughter and son, Elias, who is named for – who else? – Walt Elias Disney.