The politics of fashion, how an outfit can incite a movement 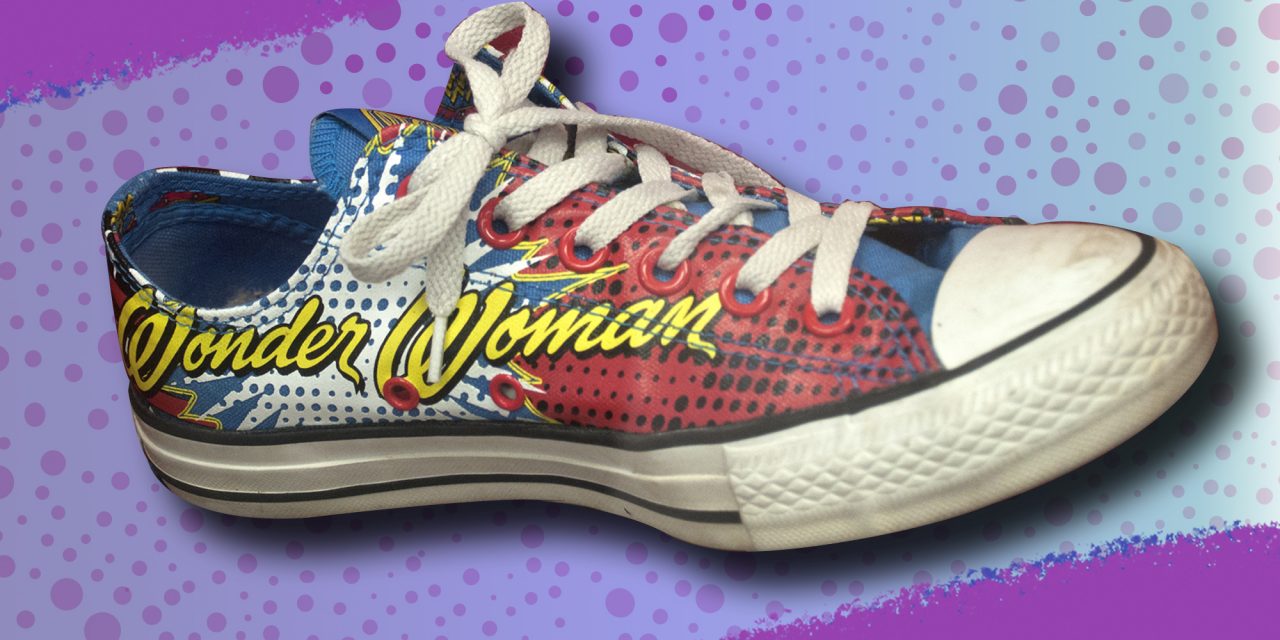 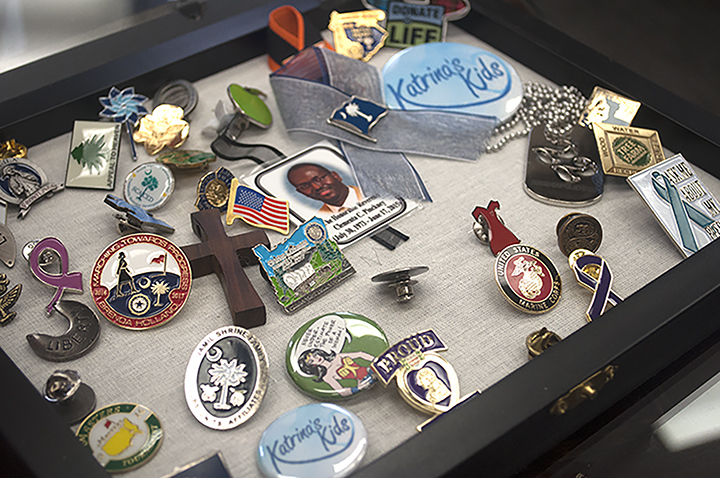 The box of pins Senator Shealy keeps in her office. 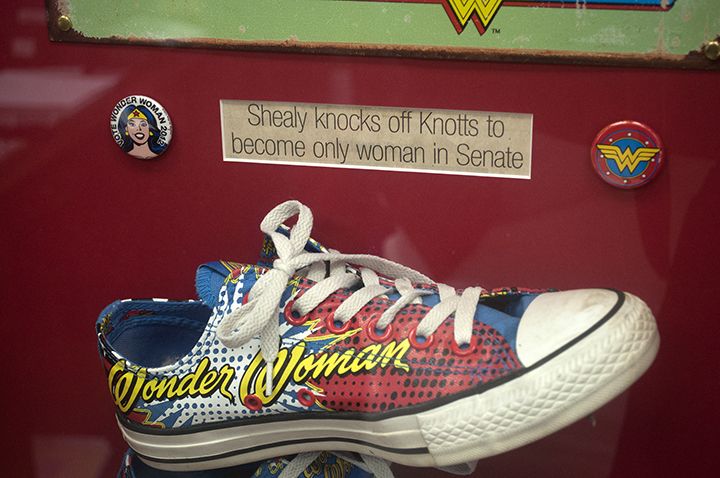 The Wonder Woman Converse sneakers Senator Shealy wore while campaigning for Senate in 2012.

To the trained eye, fashion boasts more political statements than even a well-attended political rally. Take Wendy Davis’s 11-hour filibuster in the Texas Senate in 2013. Her deliberate choice of shoe incited a viral movement of not only protesters in the streets, but also over 150,000 mentions across social media platforms. Equipped with a pair of comfortable pink trainers, Davis spoke for nearly 11 hours to stall a Republican bill that would have resulted in 37 of the state’s 42 abortion clinics closing. The bill was not passed, and Davis’s filibuster worked.

Davis isn’t alone in her use of fashion to take a political stand. In Washington, House Minority Leader Nancy Pelosi wore four-inch heels to filibuster for more than eight hours straight. Reese Witherspoon and dozens of other celebrities donned all-black in support of the #MeToo Movement.

“You’re giving a message of some sort, no matter what you wear,” said Karen Edwards, a senior instructor in the Department of Retailing at the University of South Carolina.

This idea of conversational fashion, or utilizing a color or accessory to bring an issue to the forefront of discussion, has been a tool women have used dating back to the Women’s Suffrage Movement during the early 1900s. Now, instead of marching for the right to vote wearing white, women can be seen rallying, most notably in the first Women’s March in January 2017, for healthcare and equal pay rights while wearing pink. This national method can be seen locally in South Carolina, too.

“We are going to use anything and everything that we can to make a statement when we feel strongly about something,” said state Rep. Ashley Trantham, R- Greenville.

Most recently, members of the state’s House and Senate wore red on national wear red day, “Go Red For Women,” an initiative spearheaded by the American Heart Association. On the first Friday of February, Columbia Councilwoman Tameika Isaac Devine hosted a press conference to kick off the initiative.

“We actually illuminate City Hall in red lights at night for heart month too,” said Devine, mayor pro tempore and an at-large member. This event and continued support throughout the month have brought more awareness to the issue.

“It’s empowering to see collectively, all of the red or all of the ribbons in one room,” said Lauren Harper, policy and communications advisor to Columbia Mayor Stephen Benjamin. “I think as long as you are able to have a powerful message, a fashion statement can be used as a supplement to the movement to help advance it.”

In addition to wearing a specific color, members of the S.C. House and Senate use political ribbons and pins to strengthen an issue. Sen. Katrina Shealy, R-Lexington, keeps a box full of pins in her office.

“I don’t want to miss the right day,” said Shealy, as she turns over the different pins in that box, finally stopping on a blue pin shaped like a puzzle piece.

“This is for autism, you know Autism Speaks, and this one is for breast cancer, so I have one for everything,” Shealy explained.

Rep. Beth Bernstein, D-Richland, tries to incorporate significant colors and ribbons in her wardrobe to support an issue or raise awareness.

“If I’m going to be talking to a group and a color is associated with that movement, I might ponder and say, ‘Yeah, let me go ahead and put on an outfit that would reflect that movement,’” Bernstein said.

Choosing a color or affixing a pin to an outfit goes deeper than a need to outwardly show support.

“Right now, we’re about 24 women out of 170 elected from the Senate and the House,” Bernstein said. “So, out of those 24 women, there are various different styles.”

Each  of the six women interviewed for this article revealed that in addition to choosing specific colors or accessories to bring awareness to a movement or cause, they all have a go-to outfit that they wear that makes them feel powerful and more confident. As it turns out, the act of utilizing fashion to advance a cause is also used by women to market themselves.

“There’s just something about putting on a pair of heels and putting on a statement color that empowers women,” Trantham said.

For Trantham, that color is blue. For Harper, those colors are navy and cream. For Bernstein, that color is red. For Edwards, that accessory is a good pair of heels. For Devine, that clothing item is a dress. For Shealy that color is red and her Wonder Woman Converse sneakers. The current behind incorporating politics into fashion runs deeper than its use to advance a social issue. Women use it for that reason, but they also use it to make a path for themselves in mostly male-dominated fields.

Shealy was the only woman in the South Carolina Senate for three years after her election in 2012, the way she dresses is a way to encourage a younger generation of women leaders.

“I had a long road to the State House and it wasn’t an easy road. I wore my Wonder Woman shoes while campaigning,” said Shealy as she points to a framed newspaper clipping and Wonder Woman Converse sitting perpendicular to her desk. “I believe women should be strong and powerful and speak out for what they believe in.”

At the end of the day, a woman’s choice to put a pin on her lapel or wear an all-white pant suit holds deeper significance than just outward support for an issue.

“Fashion can bring awareness and start conversation. Politically, it can start more discussion around tolerance and appreciating the diversity and cultures that make America America,” said Devine.

It’s a tool primarily women have used throughout history to assert their power and stance on an issue. Ultimately, the politics of fashion represents more than just a stance propelling an issue forward. It signifies a mostly woman-dominated tool in politics. Because sometimes a voice is not enough.

As part of this article, we met with, and photographed the women interviewed for this article to get an idea of what an everyday outfit might look like for them. To see their outfits, and why they chose to wear them, keep reading. 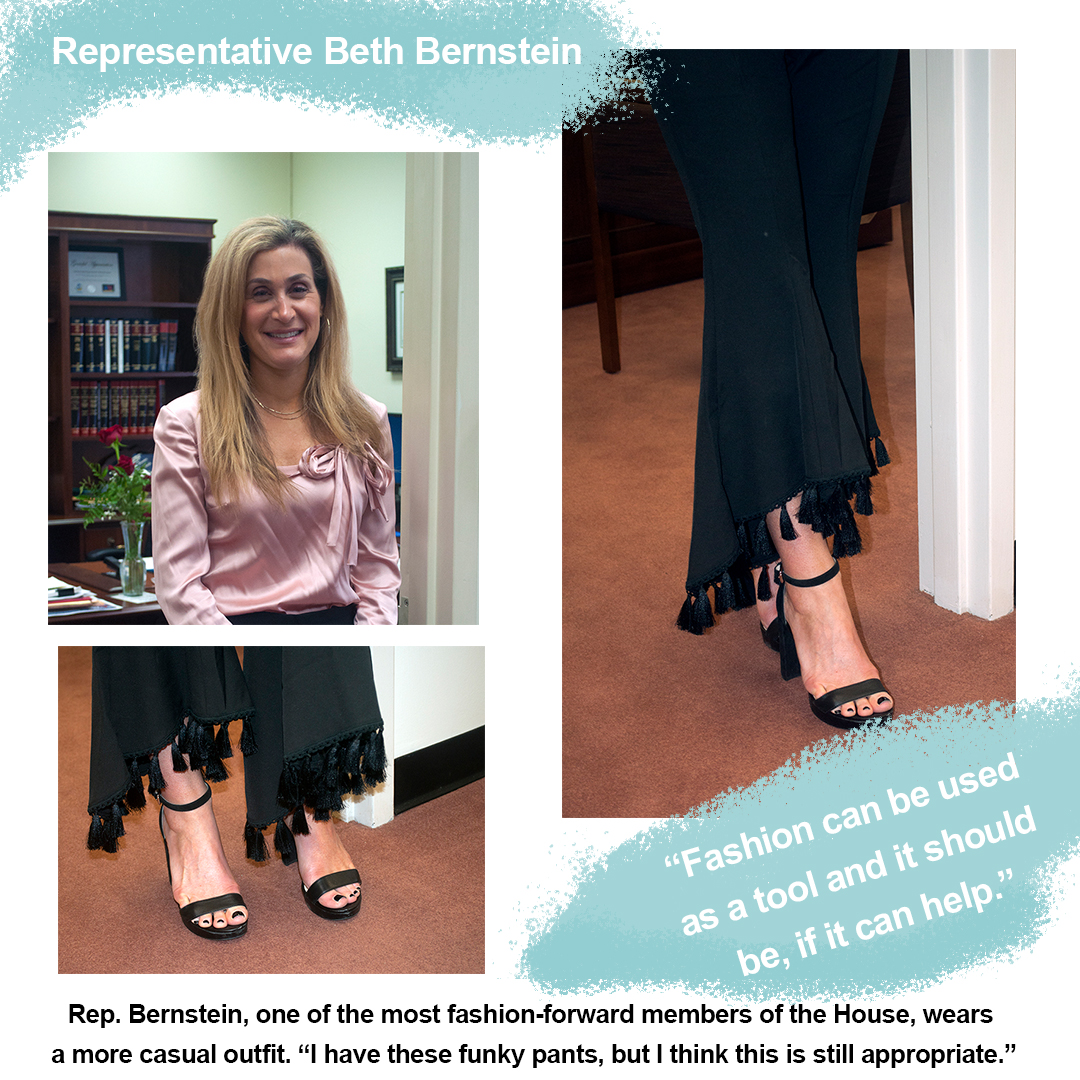 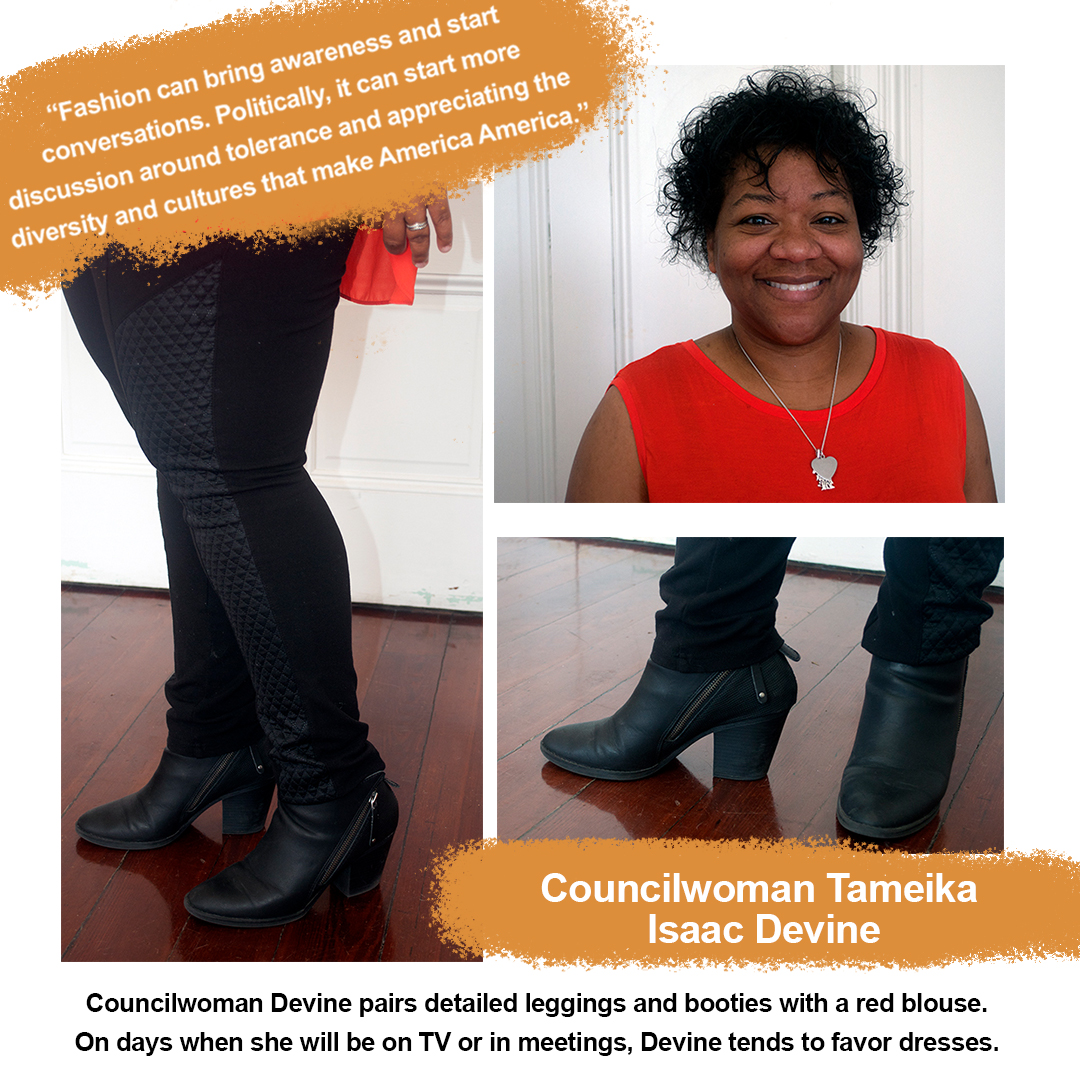 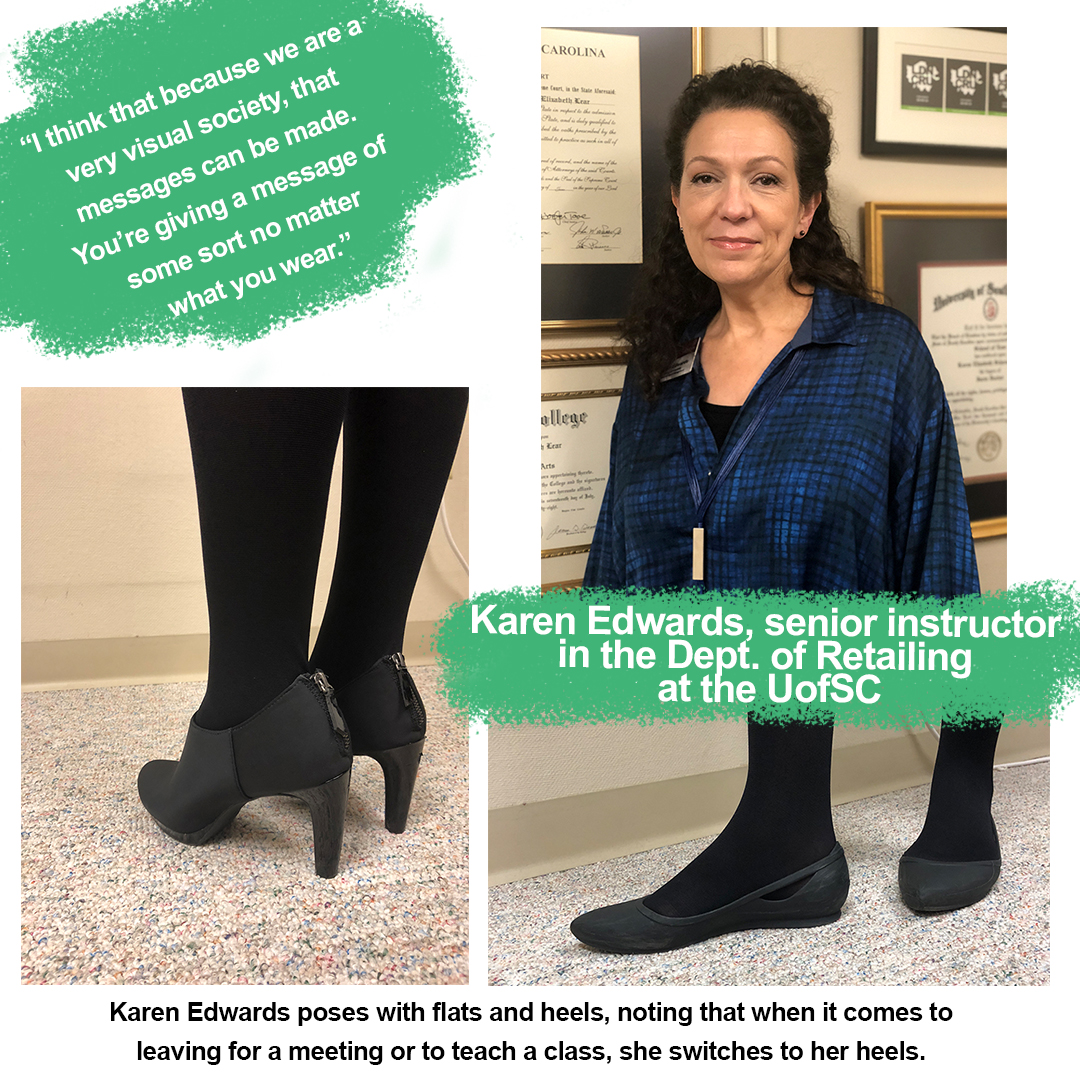 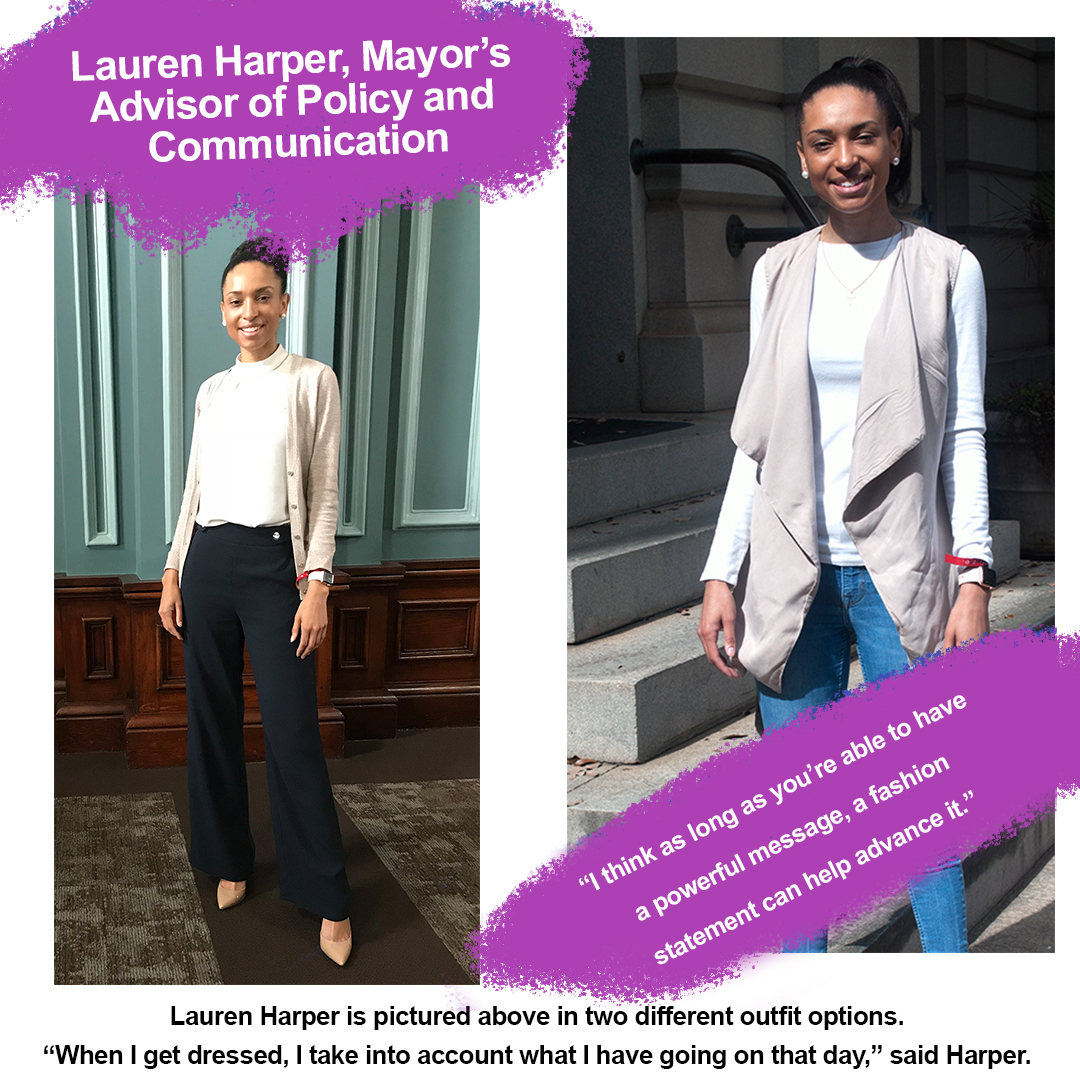 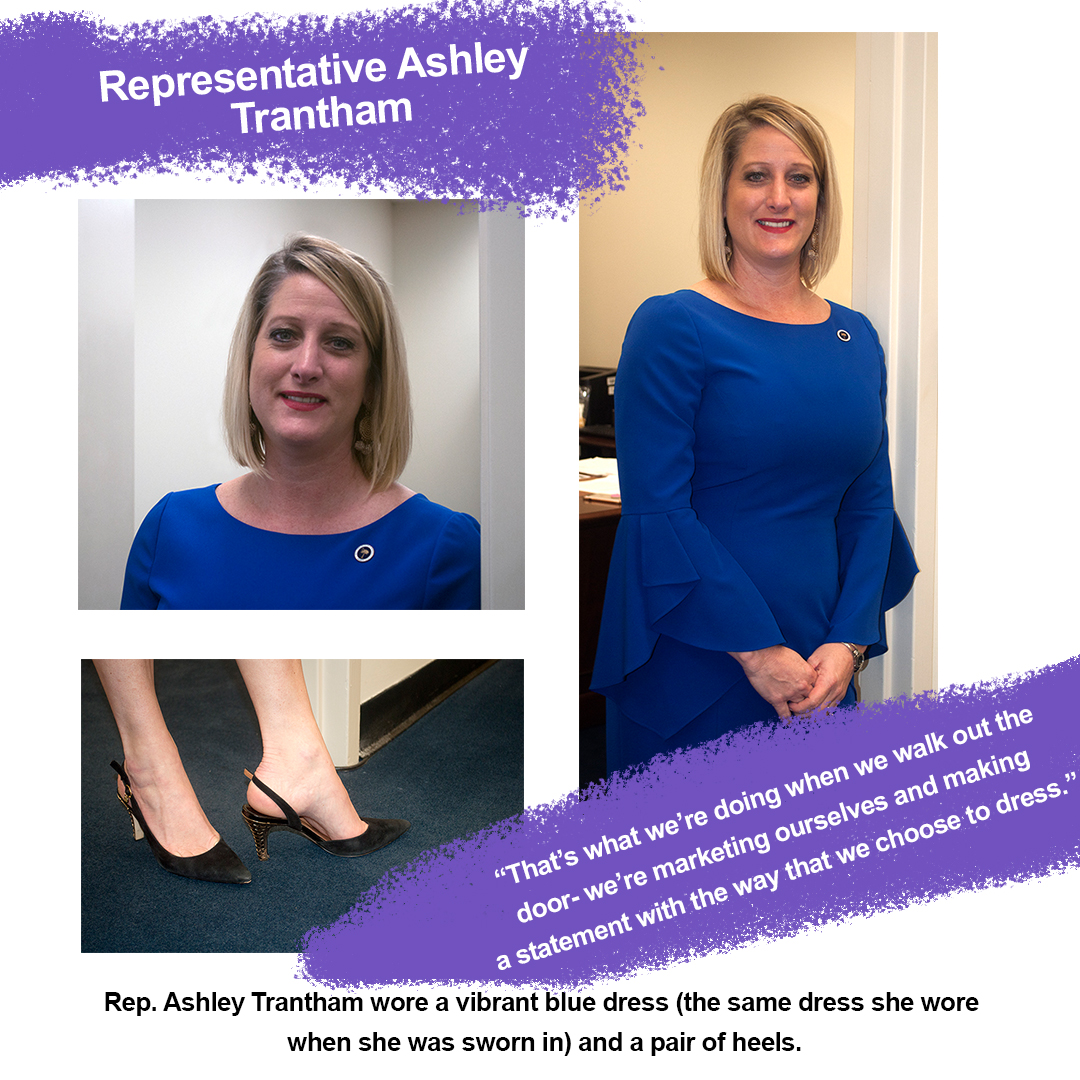 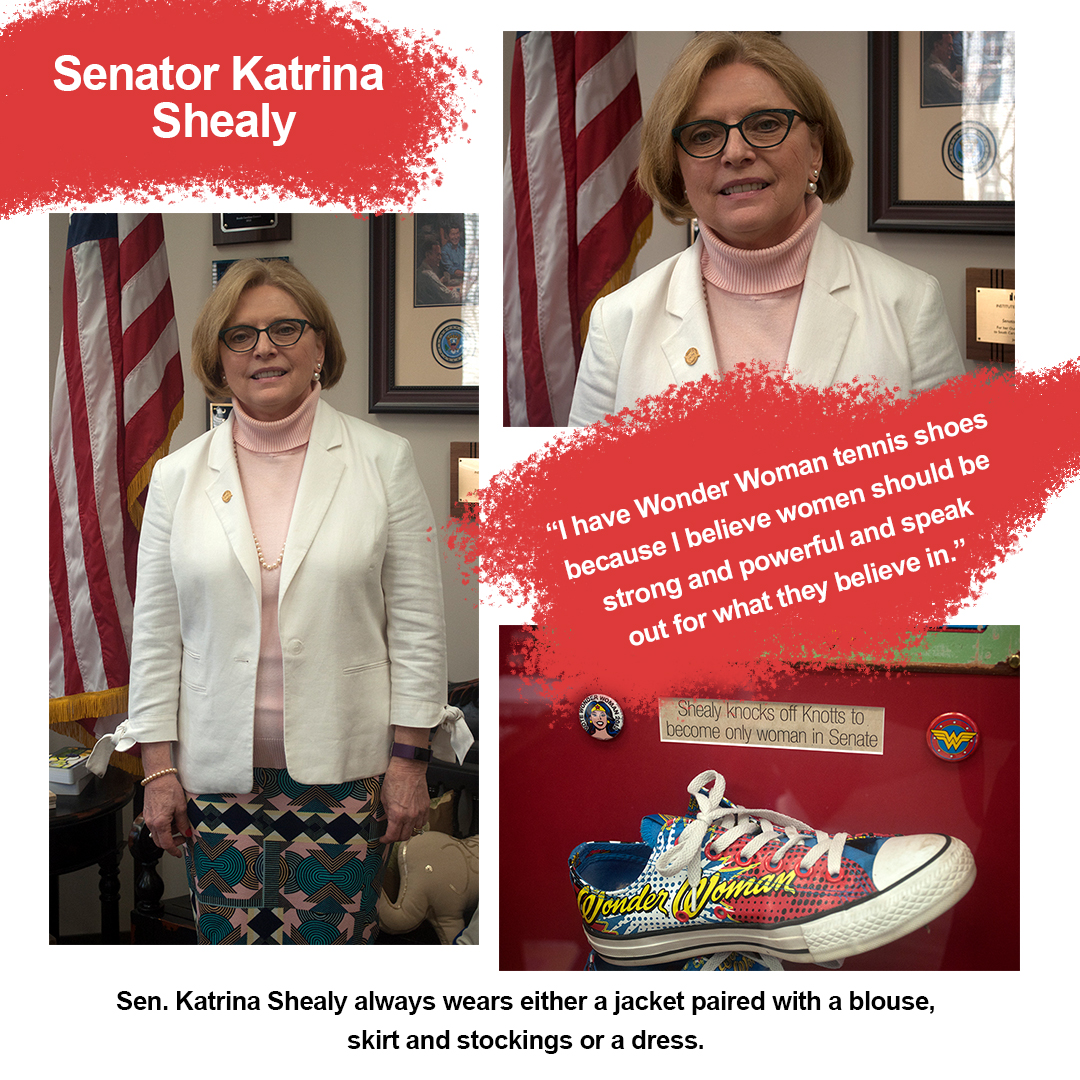