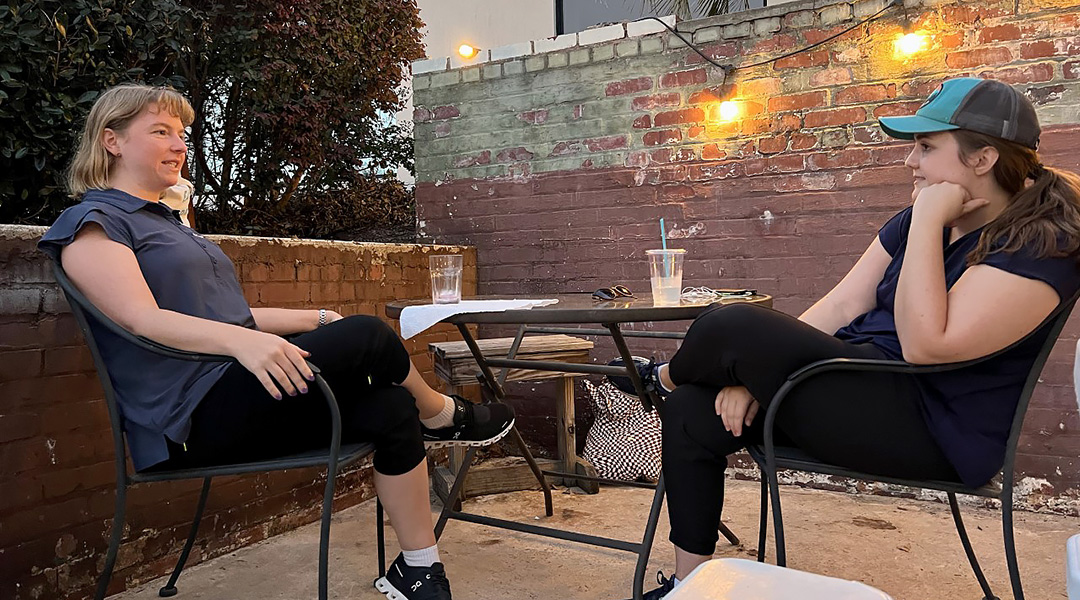 Michelle Bizzell hung up her Winnie the Pooh overalls and slipped into her collared shirt and pants for her podcast club meeting.

Bizzell does not watch television. In fact, she doesn’t even own one. Instead, she does puzzles or goes on walks around her Earlewood neighborhood — all while listening to podcasts. With purple polish on her nails and bouncy bangs framing her face, this seven-year podcast fan is the chapter leader of the Podcast Brunch Club in Columbia.

Podcast Brunch Club is a global organization similar to a book club — but for podcasts. There are more than 30 chapters worldwide, and 24 of those are in the United States. Columbia’s chapter meets once a month at Curiosity Coffee Bar on Main Street. The Columbia group’s most recent meeting centered on the theme of healing. Despite the small turnout, the meeting still garnered discussion and members hope to grow the chapter.

Club founder Adela Mizrachi lives in Chicago. She started Podcast Brunch Club in 2015 as something to do with her friends and didn’t expect it to go beyond that. After about a year, she said people beyond her friend group and beyond Chicago told her they wanted to join.

“It’s sort of global and local at the same time,” Mizrachi said. “It makes it kind of fun because that means that everybody all around the world is listening to the same set of podcasts during the same month.”

Sara Betenbaugh joined Columbia’s chapter in 2020, during COVID. A dedicated member, she has an entire folder in her email devoted to Podcast Brunch Club and has attended almost every meeting. She said she appreciates podcasts because they expose her to topics she would not know about otherwise, and they allow her to view the world through a wider lens.

“As someone who grew up in the conservative South, I don’t know, it expands you to different viewpoints of how people view the world,” Betenbaugh said. “You’re listening to someone you don’t know, and you’re never going to meet, so there’s no pressure to continue the conversation. You can digest it on your own.”

Shannon Martin is a global chapter leader who lives in Valencia, Spain. Martin works at Podbean, a podcast host platform that sponsors Podcast Brunch Club. She said the club is beneficial for people living in a new country and looking for community.

“We have a lot of differences, and yet this commonality of the curiosity of living abroad and wanting to explore new things,” Martin said. “And there’s this underlying thing that’s kind of in common.”

Before leading the Spain chapter, Martin headed the Podcast Brunch Club chapter in Shanghai, China. She said the meetings there brought in almost 20 people. In Valencia, she gets about six to eight members per meeting, although there are roughly 30 people registered in the chapter’s WhatsApp group chat.

“Podcast fans is one set of it, but people that like to go to discussion groups is the other huge target audience,” Martin said. “We’ve had so many people come over the years. They’re like, ‘I never really listened to podcasts until I heard about this group.’”

A study by the Pew Research Center in July 2021 found that 23% of adults said they get their news at least sometimes from podcasts.

As of December 2021, Spotify streamed 2.2 million podcasts — 450,000 more than it had in 2019 — according to research from the International Institute for Management Development.

That can be an overwhelming amount of content — another reason why chapter member Betenbaugh said she enjoys Podcast Brunch Club.

“It’s just nice to have something consistent to come into,” Betenbaugh said. “A lot of these podcasts I would’ve never listened to before because they aren’t in the realm of what I listen to.”

Although podcasts surfaced before social media in the early 2000s, they entered the cultural mainstream with Apple’s iTunes 4.9 update in 2005, according to a research article for Sage Journals from 2019. The Apple software update allowed people who were not tech-savvy to access podcasts.

The podcast “Serial” also gave the medium a boost when it was released in 2014.  It followed the death of Hae Min Lee in Baltimore and the trial of her boyfriend, Adnan Syed, who was charged with her killing. “Serial” was the fastest podcast to reach 5 million downloads at the time, and was on the iTunes Top 100 for more than 1,100 consecutive days, according to an article published to Journalism Practice for Taylor and Francis Group. On Sept. 19, Syed was released from jail after serving 23 years for Lee’s murder.

Jenna Spinelle is another chapter leader of Podcast Brunch Club who leads a virtual chapter out of her hometown of State College, Pennsylvania. There’s not a chapter where she lives, so she decided to start a virtual chapter in 2019 that’s open to anyone.

Roughly eight to 10 members show up for the virtual meetings, Spinelle said. She said most of the members who join her virtual chapter are from the United States. But she has had members dial in from places like Canada, Australia, Thailand and Africa.

“I think that we, as Americans, tend to get locked into a very American-centric perspective on things,” Spinelle said. “It is often very interesting and insightful to hear perspectives from outside the U.S.”

Back in Columbia, only Bizzell and Betenbaugh came out to the chapter’s most recent meeting. Bizzell hopes to reach more people and grow the chapter — but knows that can be hard.

“People are busy,” Bizzell said. “They’ve got their lives and their commitments going on, and it can be hard to fit in something new. But for somebody who’s kind of introverted or shy or socially anxious, it’s not as simple as that. It’s maybe asking more of them than it might be for somebody who’s really extroverted and loves to meet new people.”

As for Columbia’s Betenbaugh, she’d like to see more diversity — such as members of the LGBTQ+ community and those of different religious affiliations — and to hear more perspectives during the group’s discussions.

Betenbaugh said even if people do not join the club, they can still learn about different podcasts from the national group — meeting or no meeting.

“I just think so many people are just so content to just live their life and not think about how other people view the world,” Betenbaugh said. “I just feel like it would create more empathetic, understanding people.” 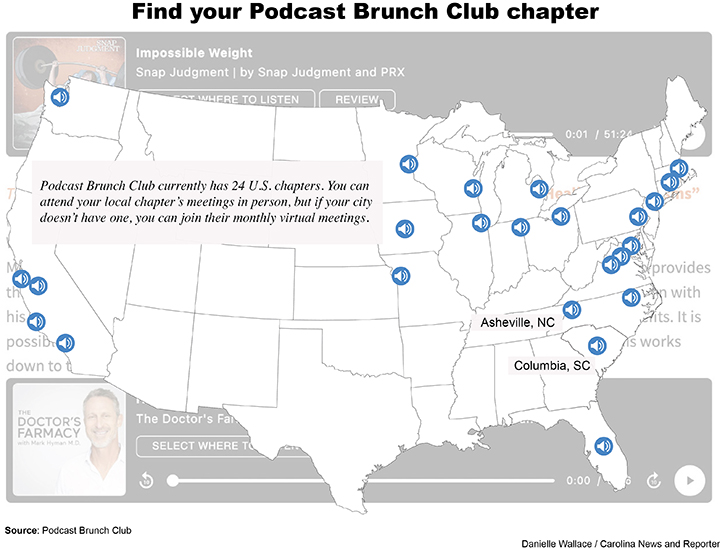 There are 24 chapter locations of Podcast Brunch Club throughout the United States, depicted by the blue sound icons. 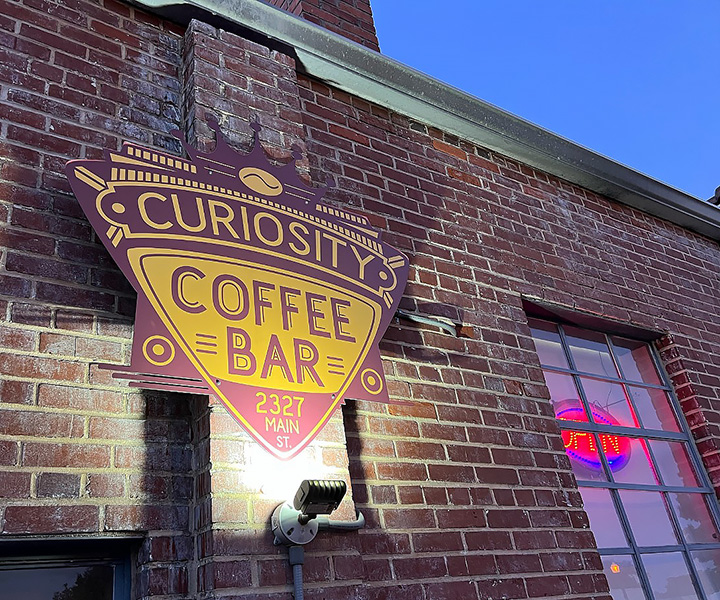 Curiosity Coffee Bar on Main Street is the meeting site for the monthly meetings of Podcast Brunch Club’s Columbia chapter. 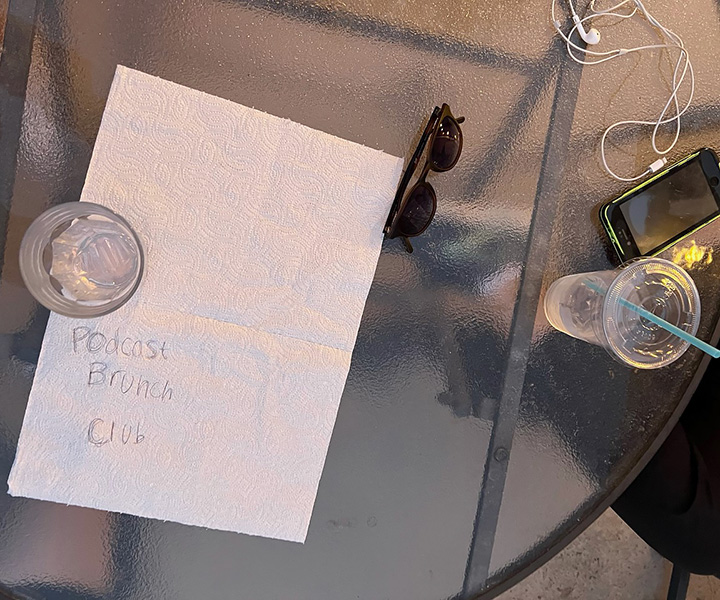 The sign created by chapter leader Michelle Bizzell notifies Columbia chapter members what table the meeting is at outside of Curiosity Coffee Bar.