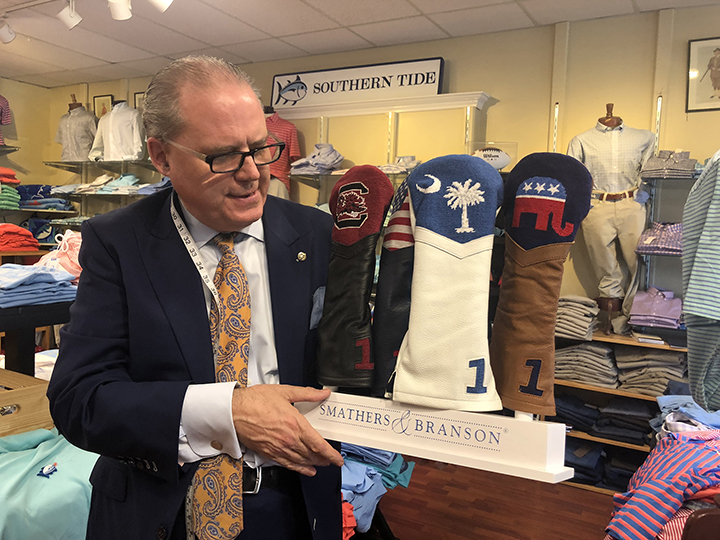 Perry Lancaster, manager of Brittons clothing store on Devine Street in Columbia, says fashion is a tradition in golf that extends further than just pants and shirts and includes dressing up a golfer’s drivers as well. 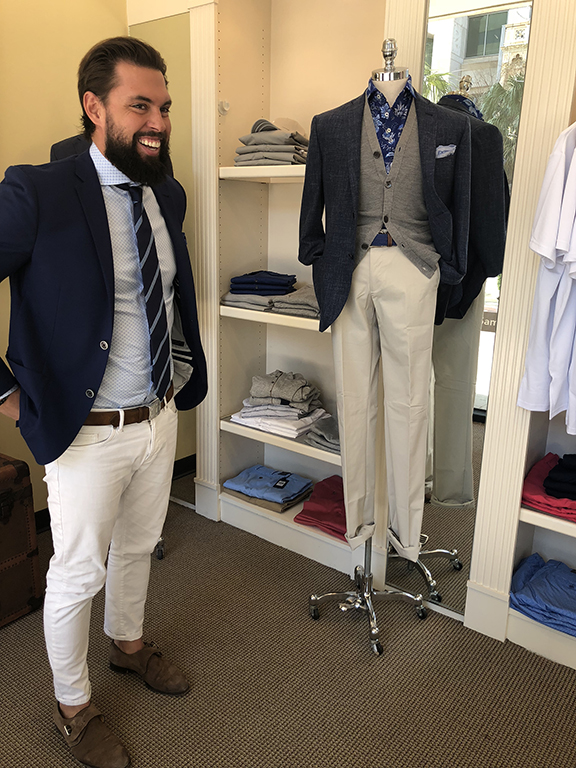 David Ashworth, a Granger Owings sales associate of four years, says that performance fabrics with floral patterns can be worn on and off the course. 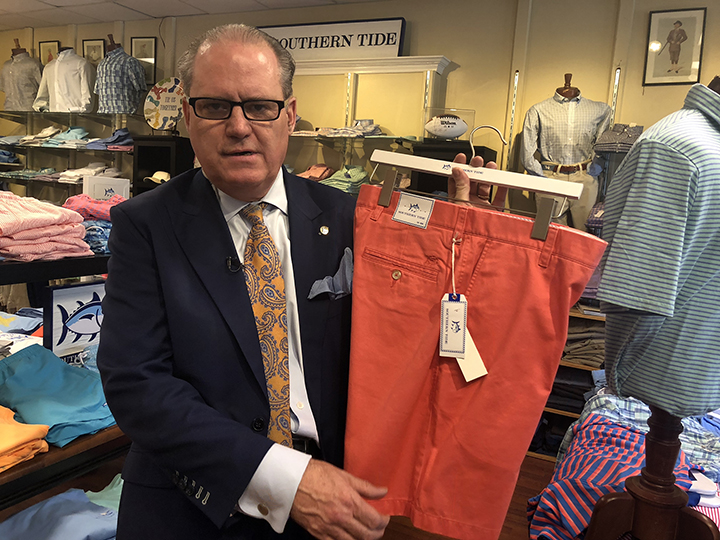 Traditionally, Masters spectators don’t wear a regular, 5-inch short and opt instead for a classic 9-inch short in a bright color. 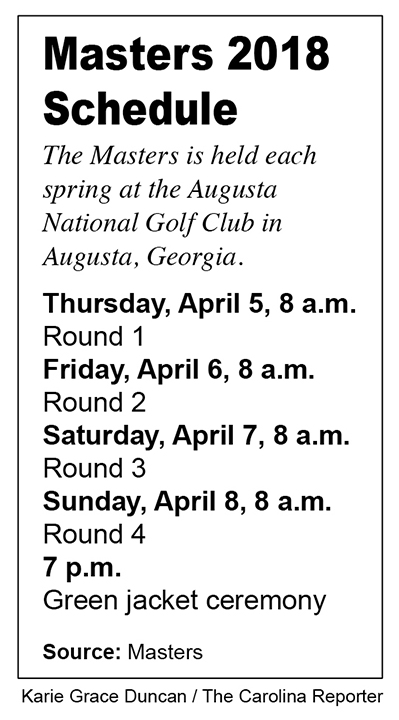 New York City has Fashion Week and the Midlands has Masters week.

Hotels are booked up, the airport is buzzing, and clothing stores are restocking as customers flock to Columbia before making their way to the Masters this week.

“A lot of people come in from Europe with a package in a hotel to stay in, play golf and then go to the Masters,” said David Ashworth, sales associate at Granger Owings. “They come into Granger Owings looking for performance shirts and shorts.”

Ashworth said customers spend anywhere from $300 to $500 for each outfit they plan to wear to the Masters.

At Brittons, manager Perry Lancaster said that customers spend around $250 per outfit for the Masters.

“They don’t want to look like the golfer that’s on the tour, but they still want to have a professional – but sport – look to wear to the Masters,” Lancaster, who has been outfitting Midlands men for 42 years, said.

The economic impact of golf apparel is major with clothing making up 66.33 percent of the market share of golf products sold in 2016, according to a market study by Technavio.

Golfers are fashion conscious members of every generation.

“With a lot of golfers, shopping is something they’re more comfortable doing,” Ashworth said. “They know they like one fabric over another and one fit over the other.”

Golf lovers are more familiar with shopping and make that obvious by adopting the latest trends.

“They want to emulate what they see Tiger Woods and other golfers are wearing on TV,” Ashworth said.

The crowd at the Master’s this year is sporting the hottest trends in fashion from more comfortable fabrics to bright colors and stripes.

“Five years ago, this shirt would have just been a blue-and-white stripe, but now it’s all about brighter colorations,” Lancaster said, holding up a shirt made of neon-striped performance fabric.

“This season is all about pinks and oranges. The brighter the better. People are asking for a bright, bold stripe,” Lancaster said.

Lancaster first noticed the shift to more comfortable golf fashion about five years ago with the onset of the athleisure trend. Young customers bought the styles first, and now older customers are wearing those fabrics to the Masters.

“Modal has been put into cotton to give it a nice, soft feel while also making it wear better and cutting down on wrinkles,” Lancaster said.

While Masters goers are on the cutting edge of fashion, there are still rules of dress to abide by.

“Don’t show up in white or tan or stone; show up in a fashion color,” Lancaster said.

Golfers also don’t wear a regular, 5-inch short and opt for a classic 9-inch short instead.

Ashworth said that bold stripes and bright colors aren’t the only shopping, and floral patterns are now welcomed. 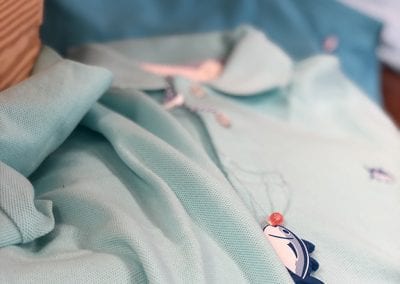 Classic styles for golfers include basic shirts without prints and oldschool picot knitting. The new styles use sweat wicking fabrics. 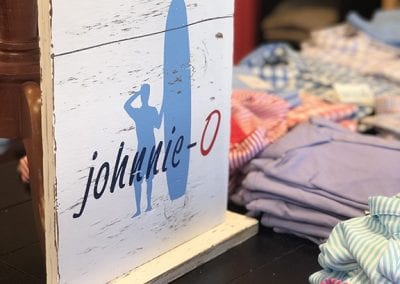 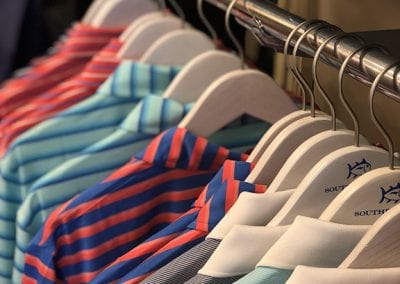 Color trends at the Masters

Bolder strips and brighter colors like orange, pink and bright blue are among the biggest trends in menswear at the 2018 Masters. 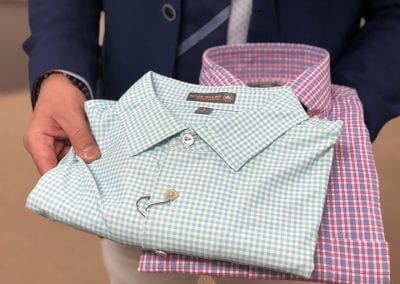 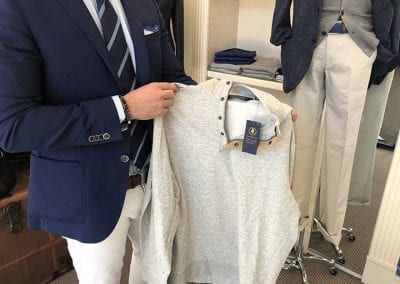 On chillier days at the Masters, attendees can sport a performancewear pullover which takes advantage of new technology allowing them to stay active without getting overly warm. 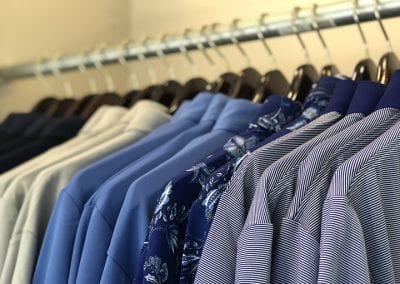 Stripes and floral shirts in bright blue colors from Ralph Lauren are among some of the most trendy items being sold to Master goers at Granger Owings.