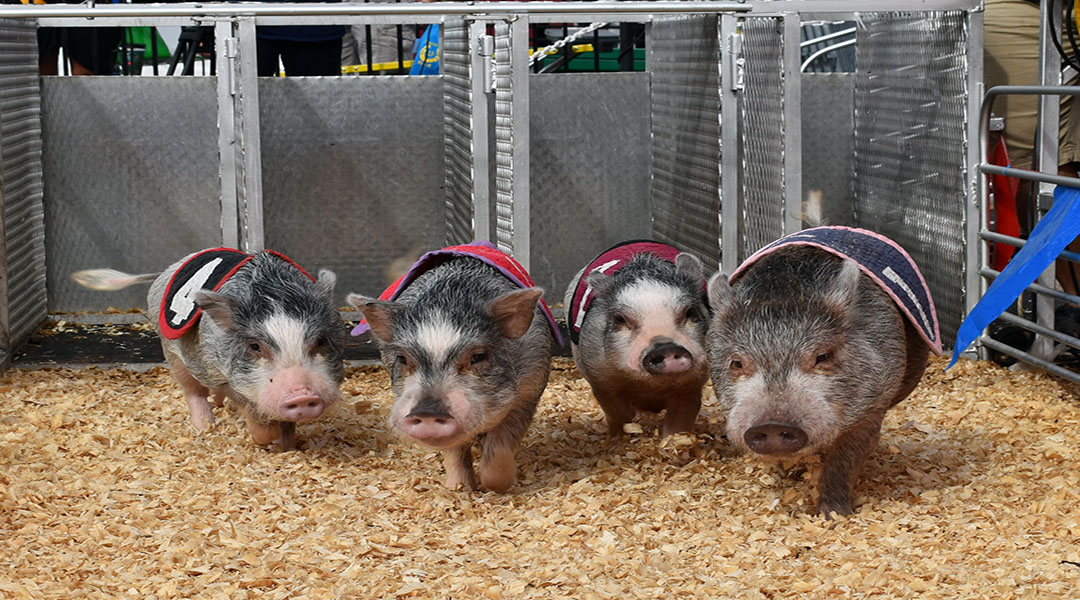 These miniature potbelly pigs race to the finish line in front of hundreds of fairgoers, where a special treat, an Oreo cookie, awaits the winner.

The S.C. State Fair marked the 14th fair this year that Josh Hollenbeck, “Swine Master,” and his wife Kelcie, “Pig Mama,” showed off their racing potbellies.

The couple works for Swifty Swine Productions, a pig racing and swimming exhibition that tours the country. They travel in a large red trailer that functions as home to both them and their pigs while on the road. On Sunday, they packed up their pigs as the fair closed and readied themselves for a much-needed break in November.

Swifty Swine Productions was started over 20 years ago by Zach Johnson, the original “Swine Master,” who discovered the secret to making pigs not just run, but run fast.

“He finally found out the right formula for getting them to run around the track as fast as possible, and that is an Oreo cookie,” Hollenbeck said.

Hollenbeck describes pig racing as “the most American thing you can do,” and holds shows five times a day for hundreds of curious eyes.

The pigs are miniature potbellies and range in age from six months to four years old. As adults, they grow to 50 to 60 pounds, and Hollenbeck says that his pigs often outrun his dog, a Beagle-Jack Russell mix.

“For a big, fat animal, they can move really fast. It’s surprising,” Hollenbeck said. “What’s more surprising is how fast they can swim.”

Each pig is given a title, like racer or swimmer, and part of the job of a Swine Master includes bonding with and desensitizing the pigs to humans. Hollenbeck says that he and his wife often have to cuddle up and watch television with certain pigs to prepare them for crowds and petting.

“We’ll watch Netflix with the pigs,” Hollenbeck said while holding a piglet he’s been training. “This little guy’s favorite show is “Orange is the New Black.”

Hollenbeck likens pig behavior to that of cats or dogs, but he says that they’re as intelligent as a three-year-old child, making them easy to train.

The pigs, whose names include Kevin Bacon and Brad Pig, are tested for illnesses everywhere they go, and Hollenbeck says precautions for their health is always a number one priority.

“We have them tested constantly to make sure they’re happy and healthy,” Hollenbeck said. “The most important thing is to keep them clean… and away from other animals.”

Unlike many fair and exhibition animals, after a few years of racing and swimming, the pigs are retired and sent to live out their lives at petting zoos around the country. Hollenbeck says that letting go of the pigs can be difficult, but it comes with the job.

“We try not to get too attached, but it’s impossible because they have such personality, they’re such wonderful animals,” Hollenbeck said. 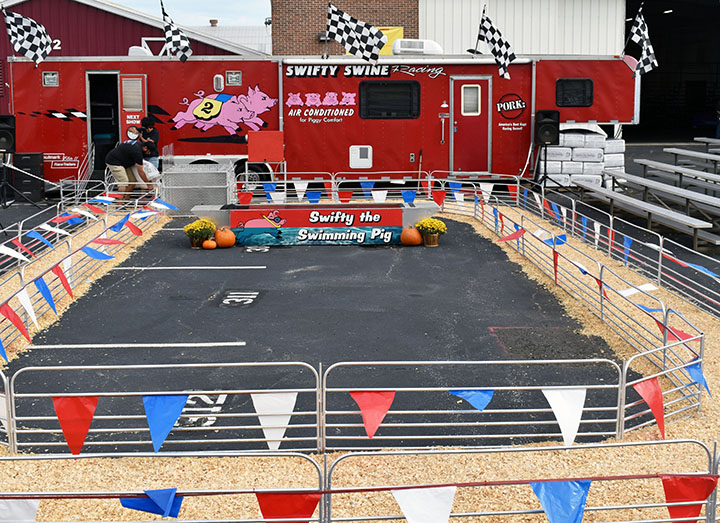 When it’s time for the pigs to race, some audience members are chosen as “cheerleaders” and are asked to pick the pig they hope will win. The cheerleader who picks correctly gets an Oreo cookie and a plastic pig snout to wear. 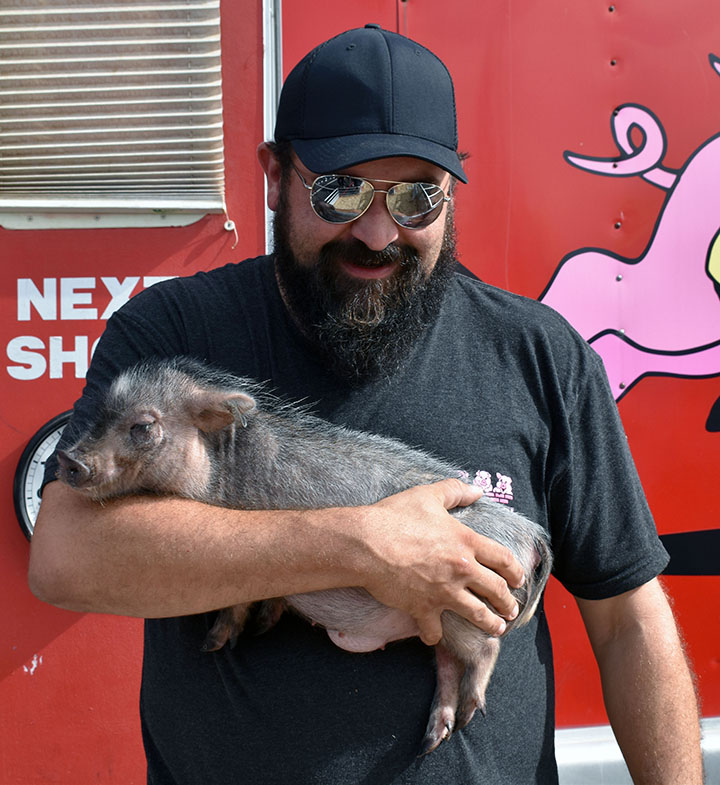 Jared Hollenbeck, “Swine Master,” says his love of animals lead him into the pig racing profession. He is holding Swifty, a pig he trained to swim. 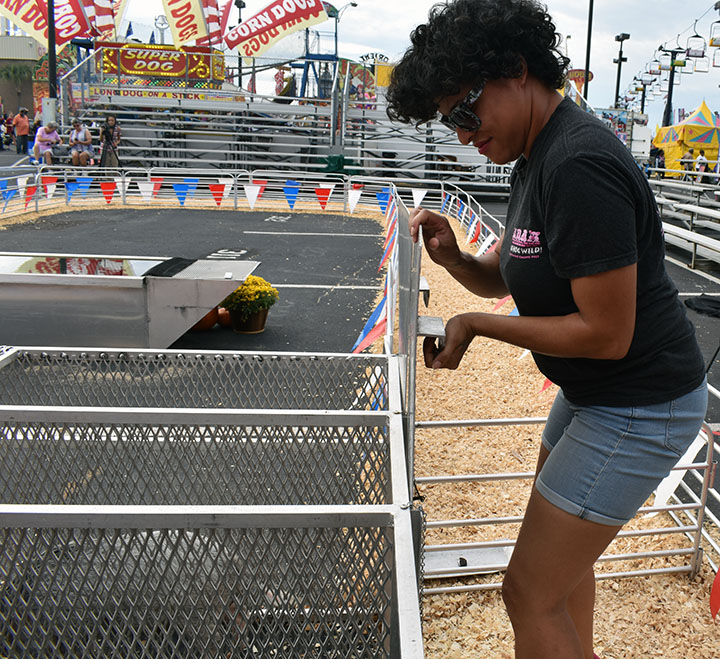 Jared Hollenbeck’s wife Kelcie, “Pig Mama,” is also known as the pig wrangler for shows. She takes them out of their pens in the trailer and gets them ready to race. 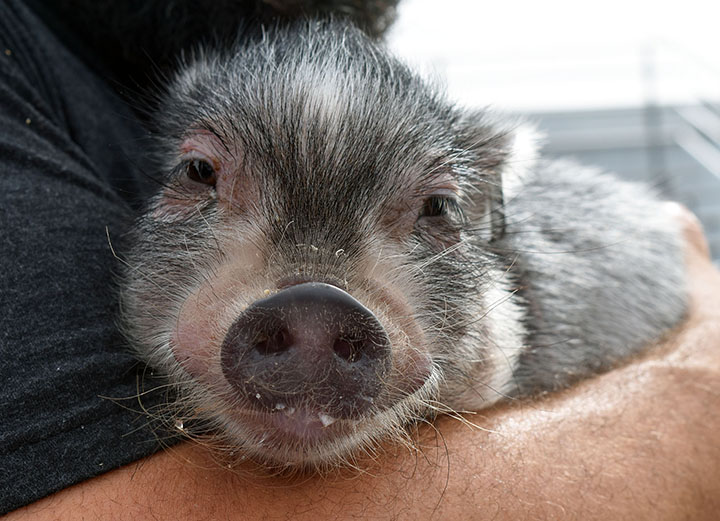 Swifty the pig is a fan favorite. His special talent is swimming and performs a swimming routine during the show. 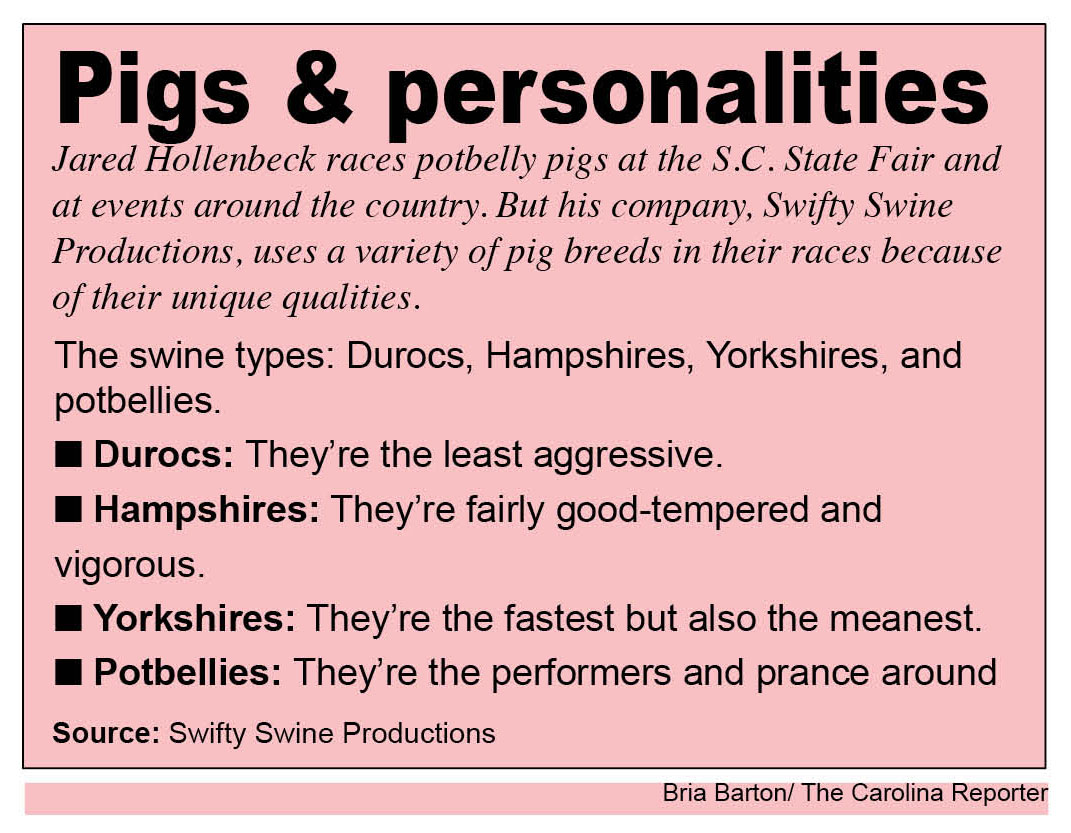