Creating ‘the inside scoop’ for the SEC Network

When news broke that Collin Hill would be the starting quarterback for the Gamecocks Sept. 26 opener, Madi Webb began to scramble.

The Southeastern Conference Network’s social media manager knew University of South Carolina fans would erupt at the sidelining of quarterback Ryan Hilinski, but she couldn’t find a photo of the newest QB. A check of Hill’s social media turned up nothing. Same on Getty Images and Associated Press Images.

As adrenaline started flowing and her fingers flew over her keyboard, Webb reached out via email to South Carolina’s assistant athletic director Steve Fink for the green light to use a photo from Gamecocks Online. Yes.

Within moments, the SEC had a tweet up and social media humming:

Webb heaved a quick sigh of relief, sipped her coffee and moved on to the next social media sports moment, the excitement of Hill now in the rearview mirror.

For the rest of her day, Webb will focus on breaking news while meeting virtually with the SEC social media team to plan for SEC college game days.

“You go until your work’s done,” Webb said.

A win for the brand

Here is Madi Webb’s working life: The alarm goes off at 10 a.m. Feet hit the floor. With coffee in hand, checks Slack for updates. Settles in on her couch. Opens her laptop to check in with her team. Begins scrolling through the latest sports news.

Webb works from home due to COVID-19 and is not expected to return to her office in Charlotte, North Carolina until early January. Her homemade office is a laptop tray that sits in front of her couch in her one-bedroom apartment with her two cats, Ellie and Fitzgerald.

It doesn’t hurt that she counts among her mentors and former bosses Steve Spurrier, the renowned Florida and South Carolina coach, who epitomes the fierce competitiveness of the SEC.

Webb is not the only person who triple checks her breaking news content on the team. Associate news director for SEC Network, Brandon Zimmermann, is Webb’s “go-to guy,” for fact-checking news and statistics.

“The bigger the story, the more platforms you want to go on,” Webb said.

The different ESPN platforms in Los Angeles, Charlotte, New York and Bristol use Slack, FaceTime and Outlook mail as a way to communicate.

Webb adheres to a strict process before hitting “publish” and alerting 9 million SEC Network Twitter fans to see the content.

She recognizes that her young age gives her an advantage to constantly adapt to ever-changing social media trends.

“This job is hard,” Webb said. “The minute I log on, I probably do not stand up until nine or ten hours later.”

Coming from the Swamp

Webb was passionate about childhood sports like gymnastics, cheer, tennis and flag football, but took a longer time to embrace sports media.

Webb started her first two years as a biology major at the University of Florida, where she was a veterinarian technician.

“I loved it, but working in it, I realized it wasn’t for me,” Webb said.

Webb volunteered to run a humane society’s social media account, which ultimately sparked her interest in switching her major to public relations. Webb knew she wanted to work in sports.

The outgoing Florida native decided to show up at the social media manager’s office at the University of Florida during her third year. Webb said she went in without an invitation, introduced herself and told the social media lead to hire her. Luckily, the two were able to bond over their love for cats.

From that moment, Webb worked in sports communication and social media for two years and was Spurrier’s assistant during her last year at Florida.

Webb continues to keep in touch with Spurrier on a consistent basis and showcases their friendship with pictures of them together on her apartment wall.

After graduation, Webb applied only for the Atlantic Coast Conference social media manager position. That job went to Krista Meyers who landed the position at the ACC, who helps her create content for the SEC.

The SEC job “was a role that was created for me,” Webb said.

Some people have picture-perfect first days on the job, but Webb found herself stuck in a blizzard at orientation in Bristol, Connecticut, without her social security card.

Webb’s first day at the Charlotte SEC Network office was Feb. 10, 2018, one day after her birthday. She said it was the best present she could’ve received.

Getting the inside scoop

Confidentiality is a major component of Webb’s job when sports news is provided before it is released in the public eye. Webb knew about a week in advance about the SEC’s 2020 football matchups.

“We get the inside scoop because we are the face,” Webb said.

Webb said it is confidential information, but she has to make sure she is talking to the right people to secure breaking news.

From preparing content for Athlete of the Year to having to prepare content for a potential cancelled season, Webb has to be in the loop. The ultimate goal is to create content that will live for days, especially on Instagram and Facebook.

This year, because of the coronavirus, she will not travel to games.

The typical road atmosphere includes Webb preparing her meals to take in a carry-on bag at the airport.

Building relationships with the SEC Network on and off the road is the heartbeat of executing content for followers.

“That’s what Madi and myself are here for, is to hold each other accountable to make sure everything looks to the standard of how our conference networks are supposed to look,” Meyers, the ACC social media manager, said.

Webb hangs out with Brooks and SEC Network anchor and reporter Alyssa Lang and on a recent night the friends went out for custards together.

On the days that Webb has time to take a break, she either exercises at Crossfit Mecklenburg or grabs a to-go lunch. Webb said COVID-19 has really helped her log off for an hour and step away.

“Since I am in a social media role I need to be on 24/7, Webb said. “I have to be paying attention to everything, so there is really no off day when that is really not the case. I need to learn to put myself first and give myself more free time.” 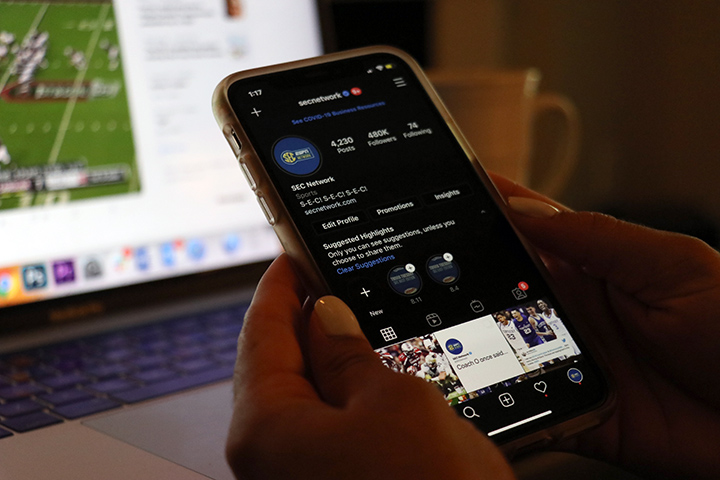 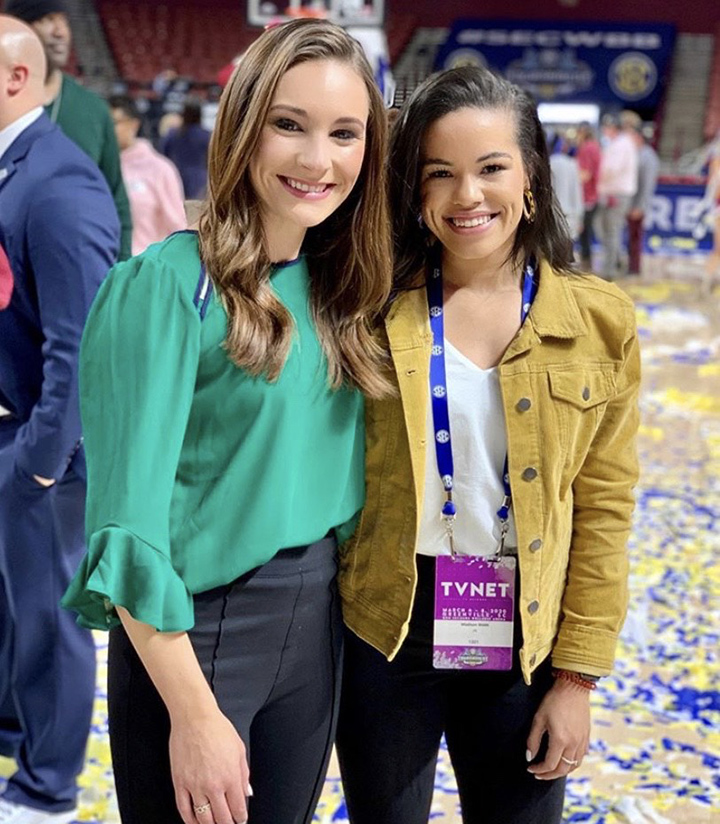 Webb and Alyssa Lang standing on the court at the women’s SEC basketball tournament on March 8. Photos: Madi Webb. 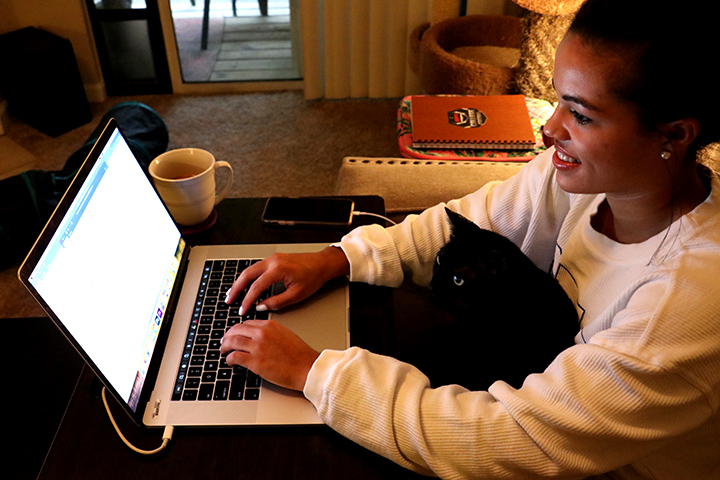 Webb sits with her cat Ellie in her lap while working on a Thursday. Webb said that Ellie enjoys watching basketball and nods her head at the ball. 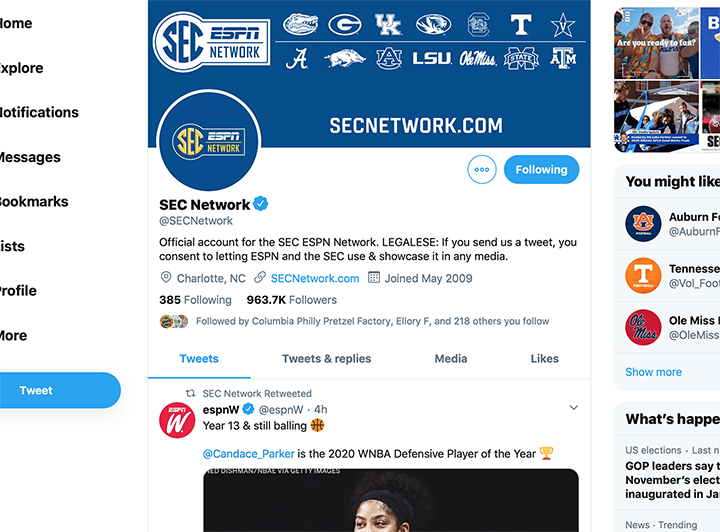