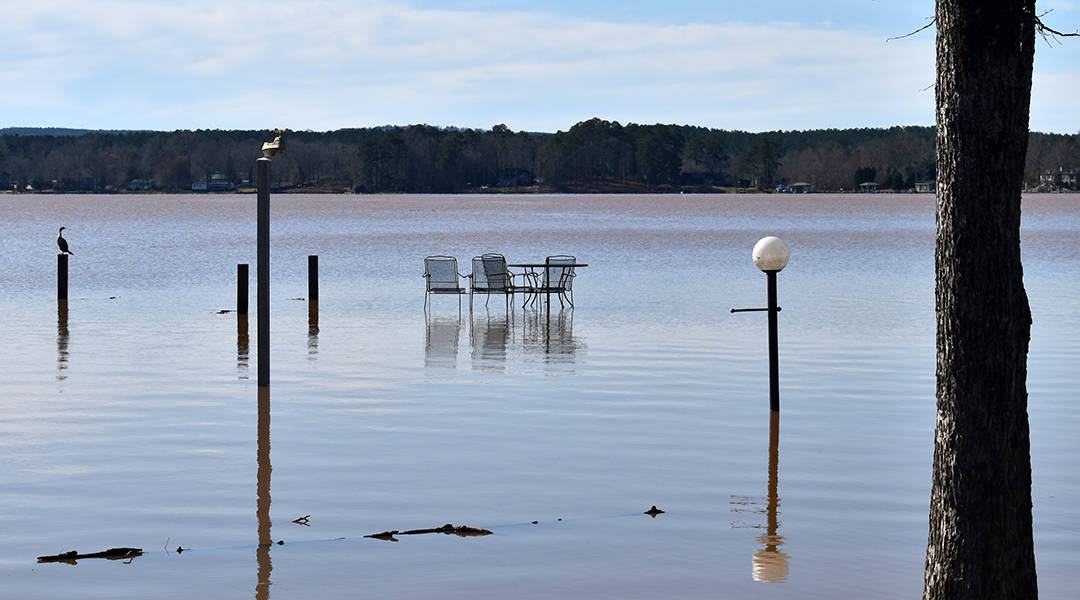 An outdoor deck table and chairs appear to float on water because of the recent flooding at Lake Wateree.

By MADDOX MCKIBBEN-GREENE and LANDON STAMPER

The pair are flood mitigation specialists with the state Department of Natural Resources. They were joined by construction specialists and representatives from nearby Fairfield County who got a close-up look at early February flooding that damaged dozens of homes. Lake Wateree rose to 106.04 feet at the height of the flooding on Feb. 8, close to the record of 107 feet.

“It’s important for people to understand their true flood risk.  That’s kind of our mission with the flood mitigation program, to protect lives and protect properties,” Lamm said.

The specialists knocked on doors along the lakefront of Lake Wateree, one of the largest man-made lakes in South Carolina. The lake is located about an hour northeast from Columbia and measures 21 square miles.

One way residents can protect their property in flood-prone areas is through the National Flood Insurance Program. The NFIP is a voluntary flood insurance program that allows communities to adopt and enforce ordinances and, in return, receive federal flood protection. Both Kershaw and Fairfield Counties are members of the NFIP.

“The reason for this regulation is to stop the cycle of flooding. We’ve seen repetitive flooding in the last few years, and the houses that are in compliance [with the regulations] are a lot less likely to flood,” Artz said.

During this assessment, S.C. DNR recorded information on substantial damage estimate worksheets, or “SDEs,” which are two-page packets which include information about individual structures’ locations, physical attributes and damage measurements.

According to the Federal Emergency Management Agency, or FEMA, if a structure reaches 50% damage – or receives any reconstruction that equals 50% or more of its original market value – then it is treated as a “substantial improvement” and has to be brought up to current standards.

“In some situations, that could mean elevating the house. That’s kind of the worst-case scenario,” Artz said.

Though S.C. DNR was aware that they would come across violations – including living spaces underneath elevated buildings – Artz stressed the importance of gathering information and focusing on damage assessment.

“We’re not going to try to figure out who is currently compliant at the moment. We’re just going to go out and do those damage assessments and figure out what we need to do later on,” Artz said.

They made assessments of manufactured homes, homes on stilts and new two- and- three story structures. At least one was entirely surrounded by lake waters.

“If someone comes in and says, ‘Oh, I didn’t have any flooding. I don’t know what you’re talking about,’ then you have this information and these pictures to back it up,” Lamm said.

Though many of the residents weren’t at home, Frank Robinson answered the door.

A resident of Lake Wateree for over 30 years, Robinson said he had to think on his feet during recent flooding, resorting to a generator to make coffee and watch TV.

While the specialists assessed underneath Robinson’s home, he recounted how this flood was different.

“It came up so fast. I’ve never seen it — even during [Hurricane] Hugo it didn’t come up that fast,” Robinson said.

Lamm cautioned residents in flood-prone areas in the state to take the proper precautions.

“Anywhere it can rain, it can flood,” Lamm said. 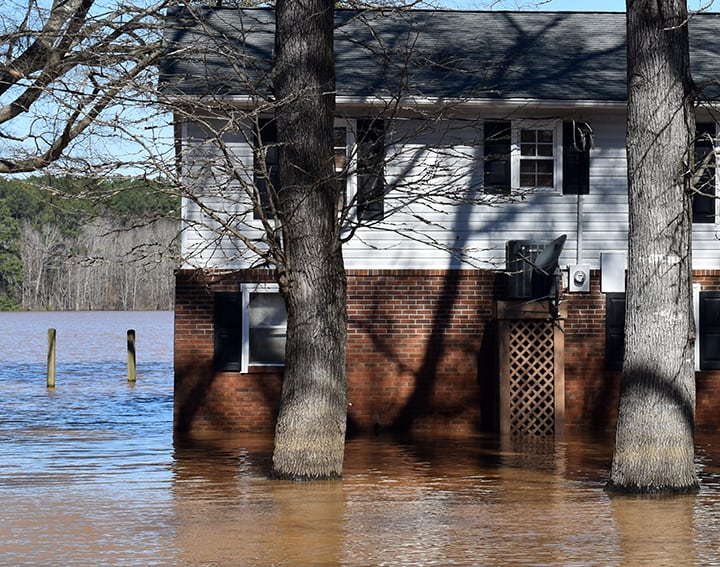 A house on Lake Wateree in Liberty Hill is surrounded by water on all four sides as a result of recent flooding. 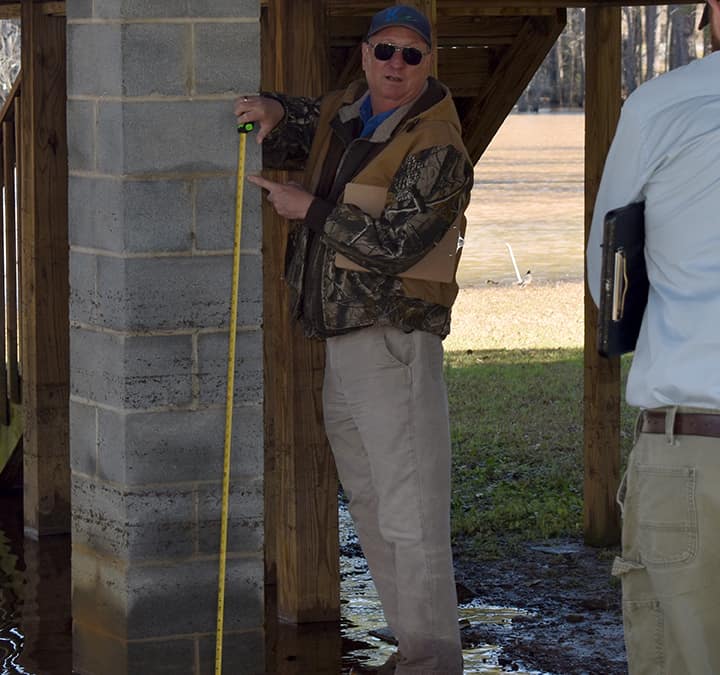 Rollie Reynolds, a Kershaw County building inspector, measures the height that flooding reached on a home. 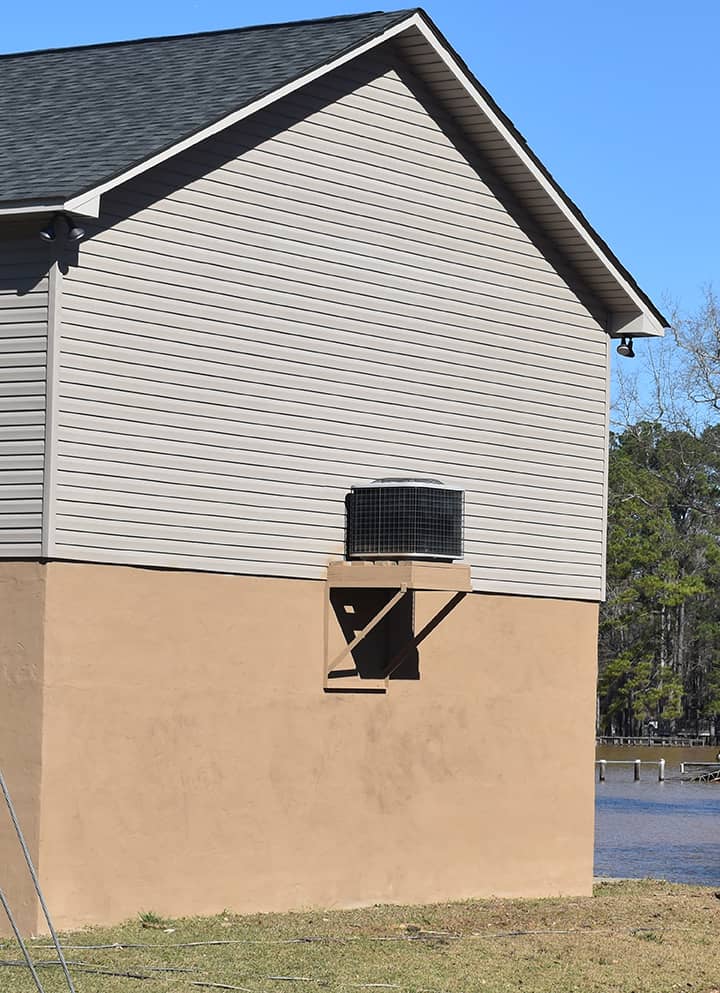 Many residents on Lake Wateree are used to minor flooding, so many have their HVAC units mounted so that the water will not damage the units. 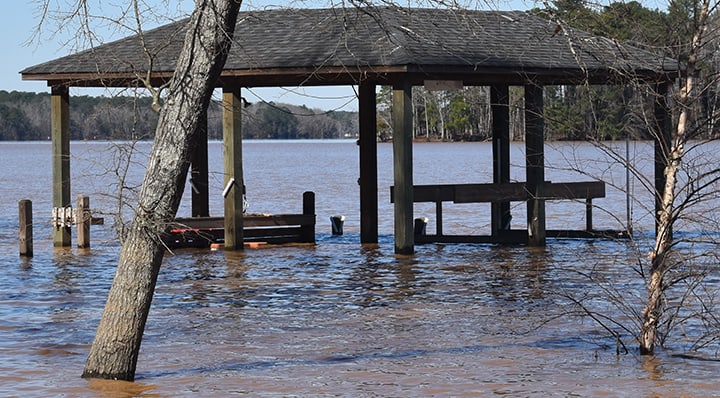 Many of the decks behind homes on Lake Wateree remain submerged several days after flooding.