Erosion gives and takes away at Botany Bay 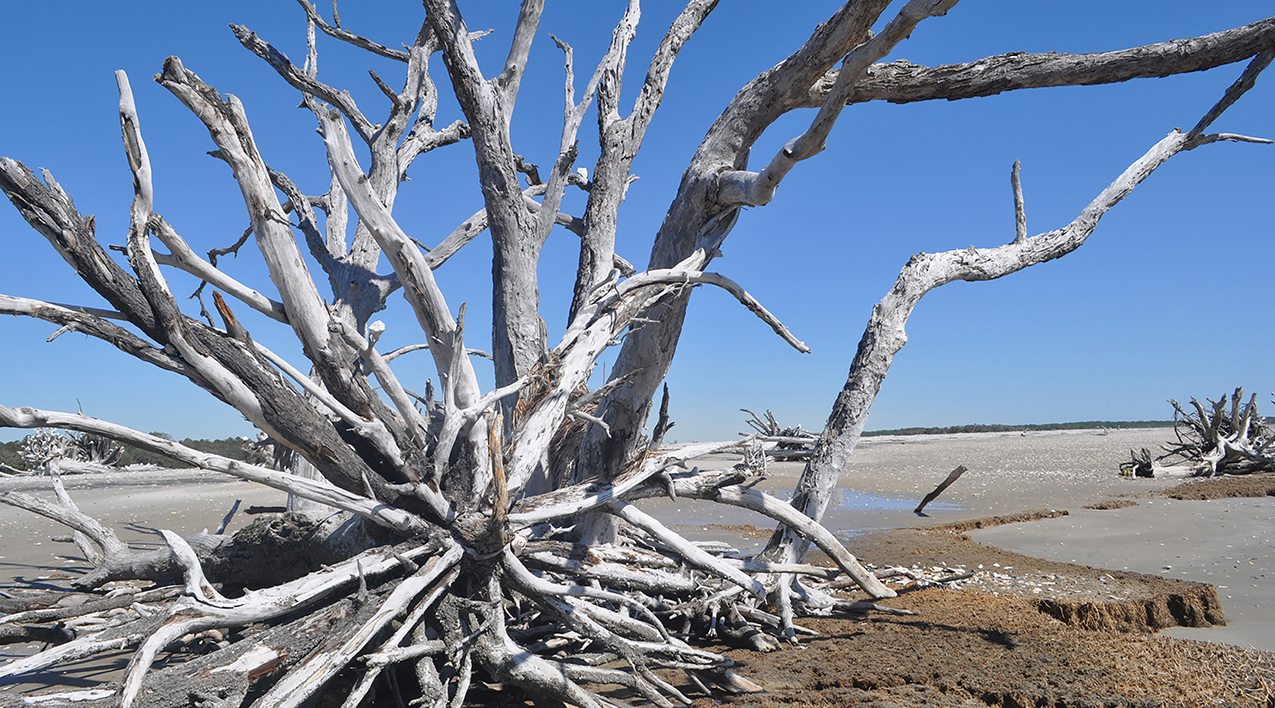 The exposed roots of an overturned, sun-bleached oak tree lie atop one of the beach’s marsh relicts- sections of slick mud and dead grass that mark where an ancient marsh once stood. 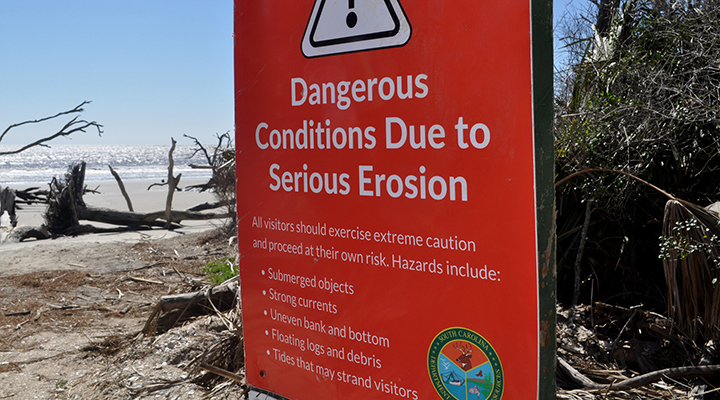 Signs warning of the beach’s dangerous erosion hazards have been erected by the Department of Natural Resources to keep visitors safe. 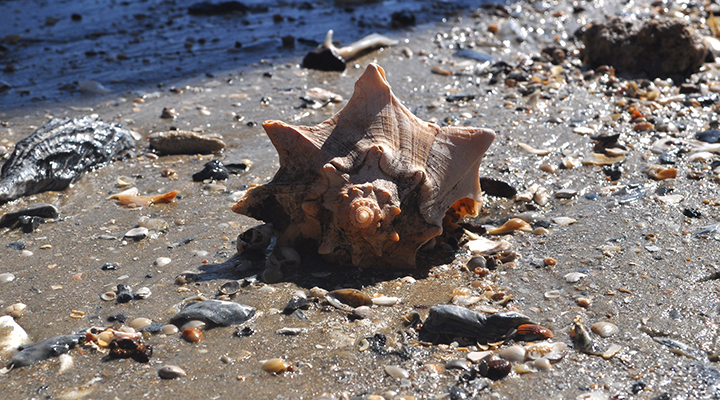 Large shells such as the Knobbed Whelk are extremely common on Botany Bay. The shells are protected under state law and taking them from the beach incurs a $470 fine. 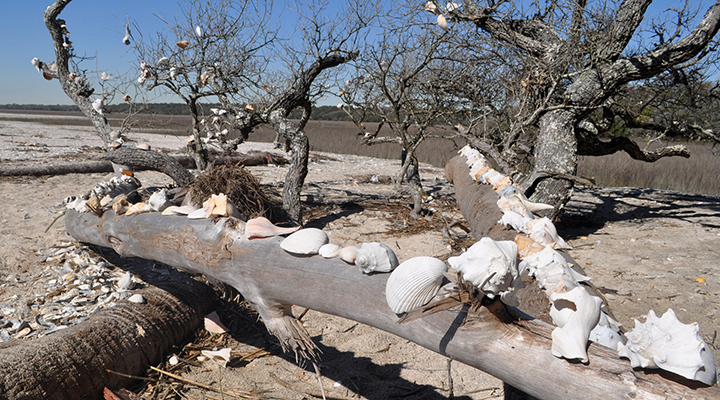 It is long-standing tradition for visitors to pile Botany Bay’s spectacular shells on fallen trees along the beach. 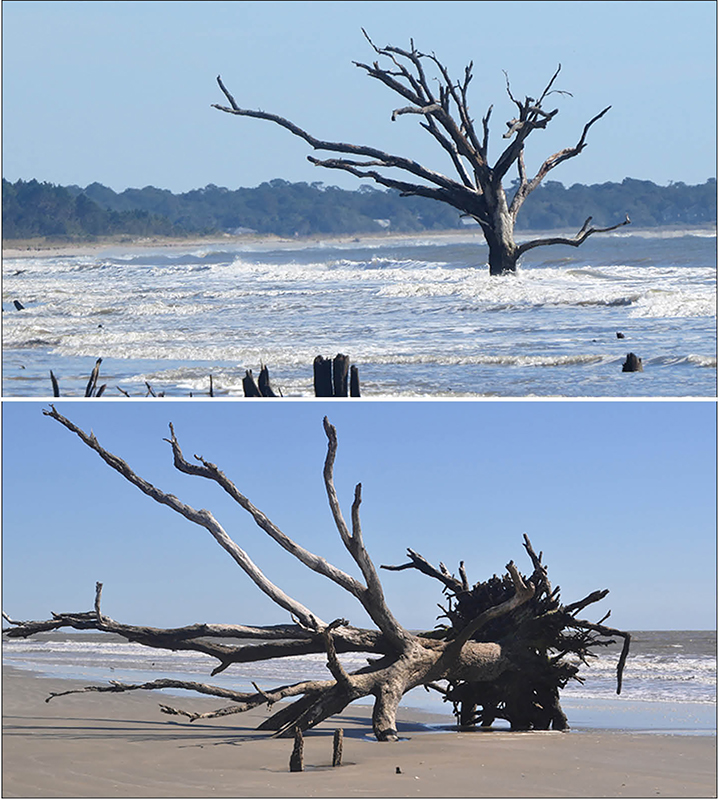 For years, Botany Bay was the boneyard beach that many people didn’t know existed. It has become popular for its wild beauty and unique features, but it has also been eroding away for decades.

The beach looks unlike most beaches in South Carolina. Its shoreline is covered in the silver skeletons of sun-bleached oaks, red cedars, and the trunks of old palmettos. Ancient stumps protrude from the sand, marking where an old forest once stood. Large, colorful whelk and conch shells cover the beach, which visitors pile on driftwood logs and hang like ornaments from the branches of the dead trees. Pelicans dive in and out of the surf and seabirds such as Wilson’s plovers forage along the shoreline.

This remarkable seascape is both eerie and breathtaking in its beauty, making it a favorite site for photographers, photoshoots, and nature-lovers.

The barrier island beach is a part of Botany Bay Plantation, and it was formed from two antebellum sea cotton plantations, Bleak Hall and Sea Cloud. The area was given over to the state  in 2007 and became a Wildlife Management Area and Heritage Preserve. It contains vast acres of pine-hardwood and maritime forest, agricultural fields, wetlands and a barrier island beach. It is home to a multitude of wildlife, such as sea birds, sea turtles, deer and raccoons.

After signing in, visitors can either head straight to the beach or take a driving tour around the property to see historic sites like the foundation of a manor house. The beach itself is not exactly easy-access; after parking, visitors must be prepared to walk half a mile over a causeway that crosses the marsh to get to the barrier island beach.

The state’s goal in maintaining Botany Bay was preservation, not development, which is part of what helped it remain one of Edisto Island’s best-kept local secrets. Unlike Folly Beach and Myrtle Beach, Botany Bay is a heavily protected area and has stricter environmental regulations to safeguard the threatened species that live there.  Alcohol, dogs, and drones are not permitted on the beach, and removal of any beach artifacts- such as shells and sea grass- will result in a heavy fine.

Its lack of public facilities (including restrooms and trash cans) and isolated location meant that it was often overlooked in favor of the nearby Edisto Beach.

When photos of the beach’s unusual appearance and beauty surfaced on the internet, Botany Bay began drawing in a much larger crowd. It is now visited by many locals frequently, and by tourists from across the country.

But erosion – helped along by storms and rough currents – is eating away at what is left of the barrier island beach. Experts predict Botany Bay may not be a permanent fixture of the South Carolina coast line forever.

But even while Botany Bay is threatened by erosion, it was erosion that formed Botany Bay in the first place. One hundred years ago, the shoreline was nearly a mile out to sea, and the area where the beach now stands was a saltwater marsh.  This is evidenced by large strips of slick mud deposits that line areas of the beach called “marsh relicts” which mark the foundations of where the marsh once stood.  Over time, erosion caused by longshore drift currents formed a two–mile beach along one of the wooded barrier islands.  The saltwater poisoned the trees, and the sun turned them white.

The erosion that created Botany Bay is now wearing away at the current beach, accelerated by the passing of hurricanes. It was closed for nine months after Hurricane Matthew ripped away the causeway bridge. The beach took a beating again when Hurricane Irma swept through, carving a large, impassible inlet towards one end of the beach, and sweeping almost all the sand away for a period of time.

Botany Bay is a perfect example of beauty and destruction coinciding in nature. For many visiting beachcombers, part of the beach’s charm is that its striking appearance is ever-changing, its beauty transforming each day due to sweeping high tides and erosion. To some, that is also what makes the beach so special.

The Beauty of Botany Bay 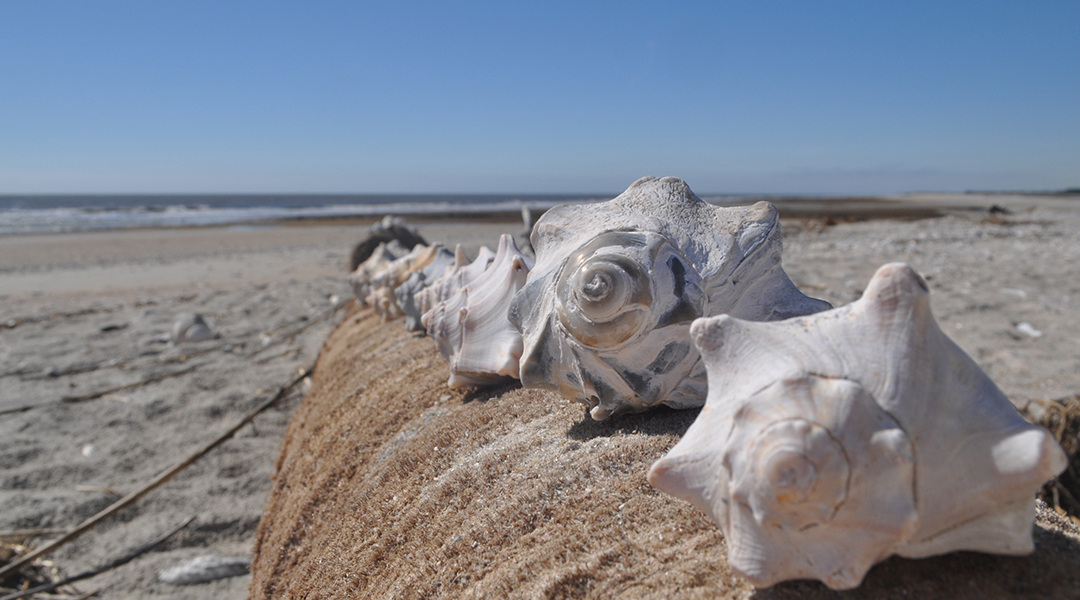 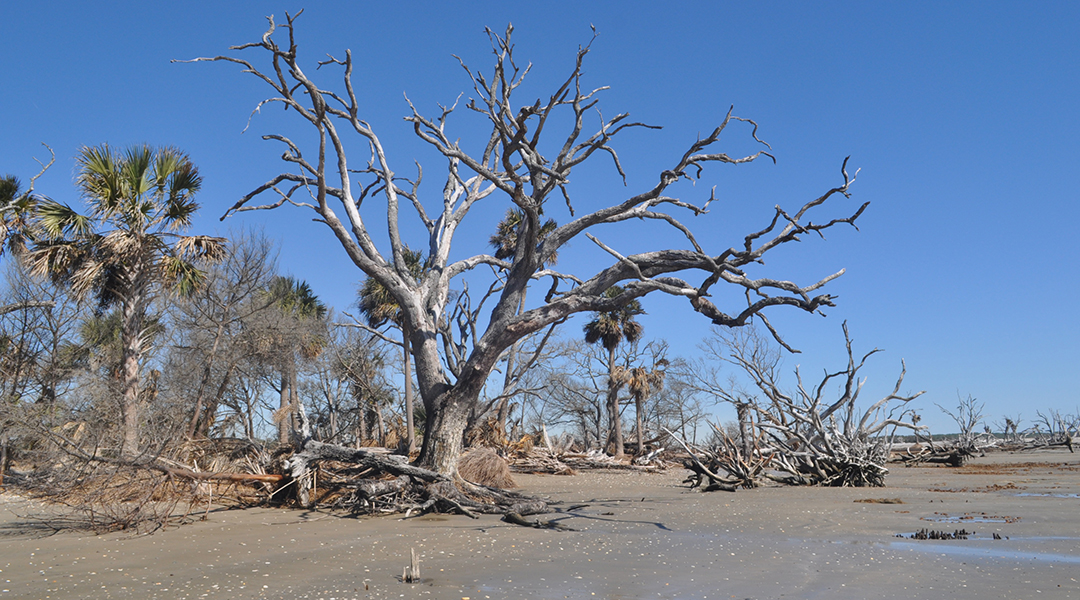 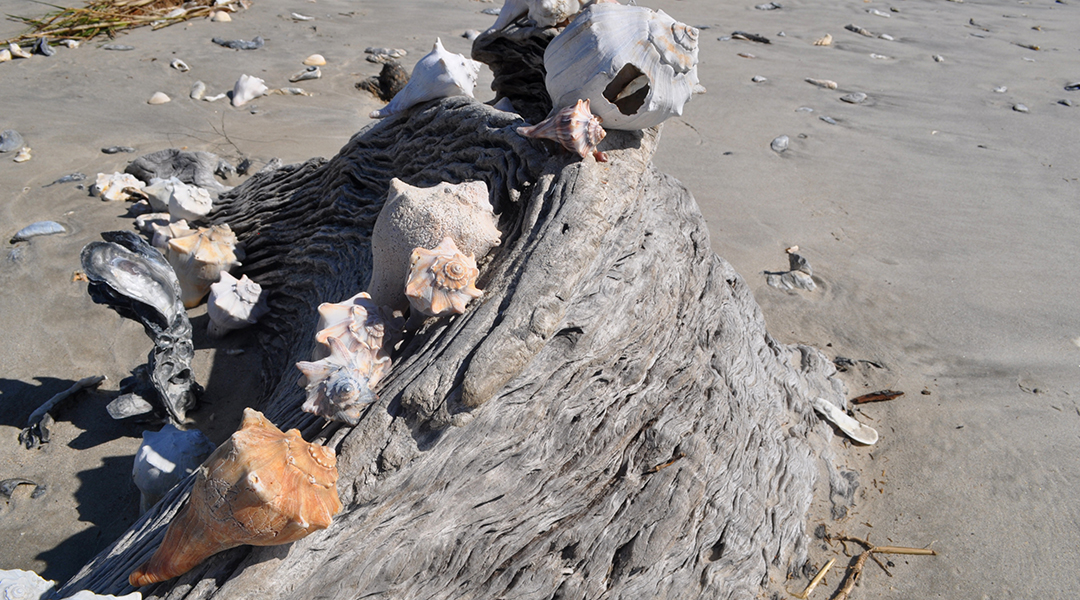 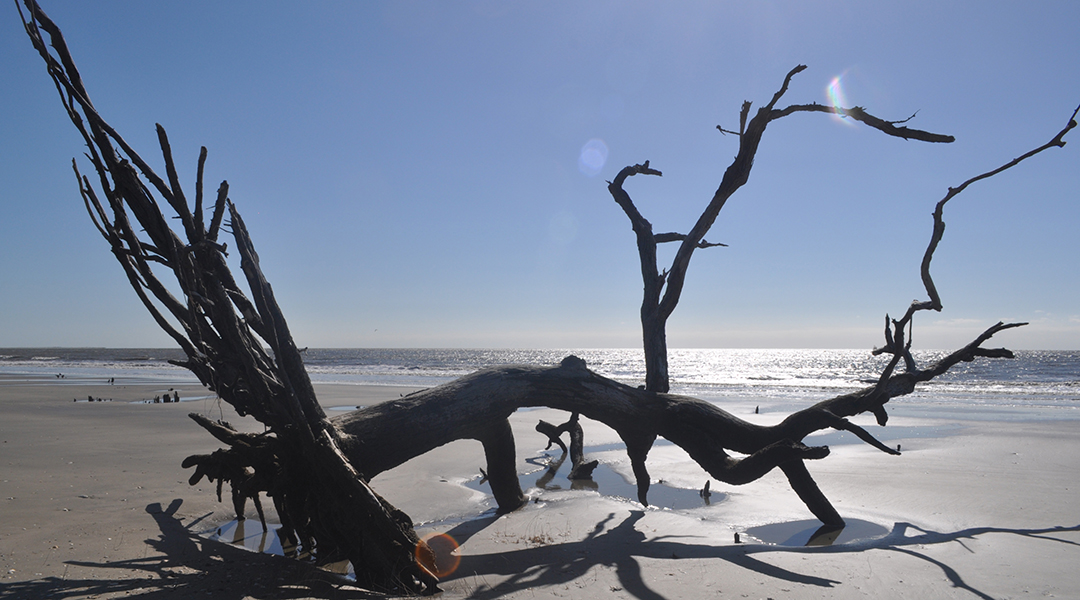 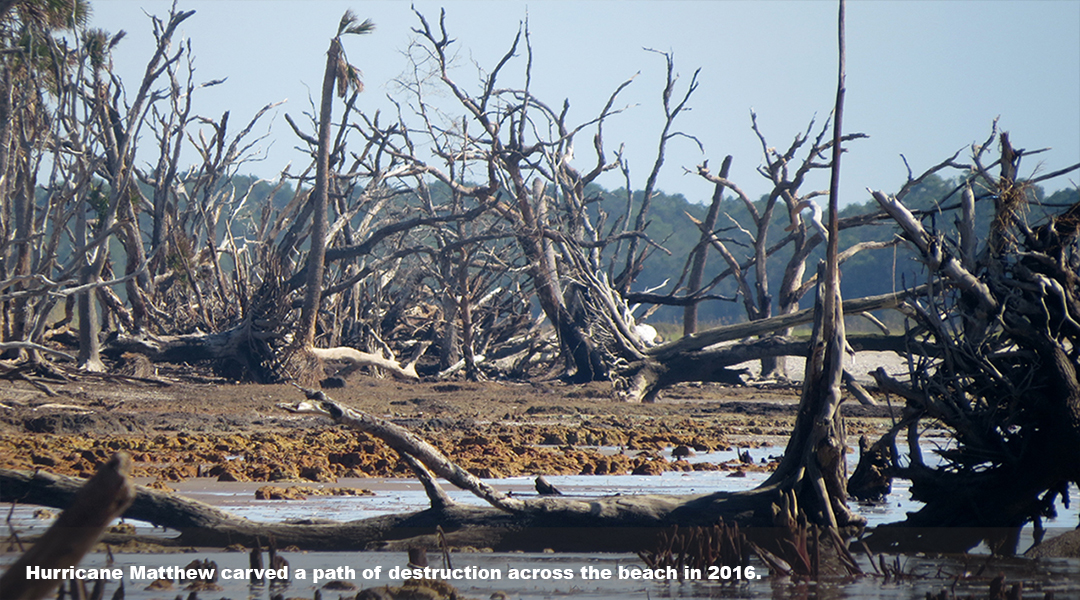 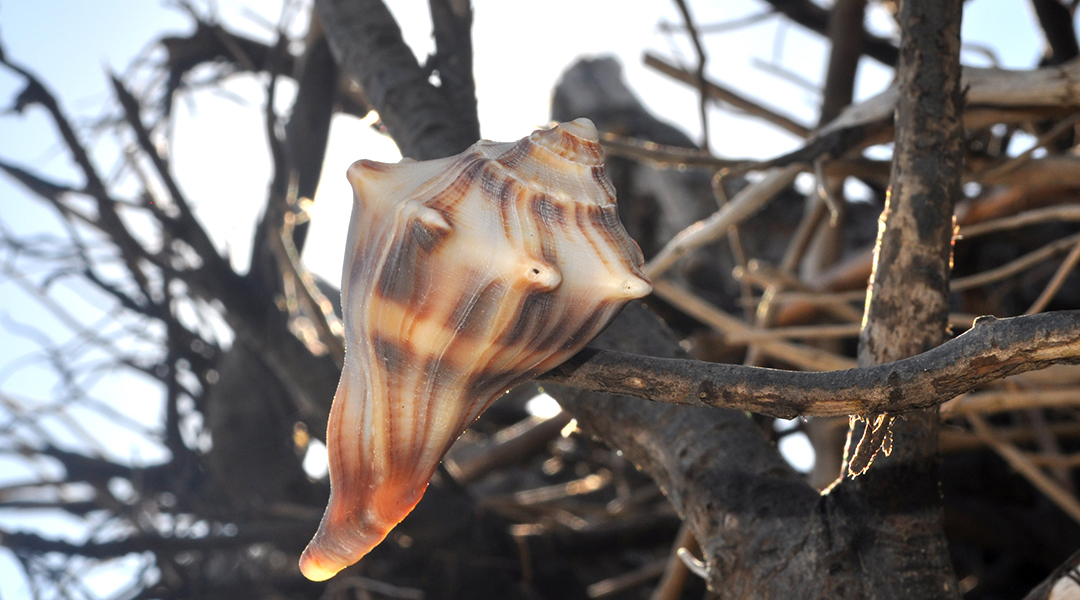 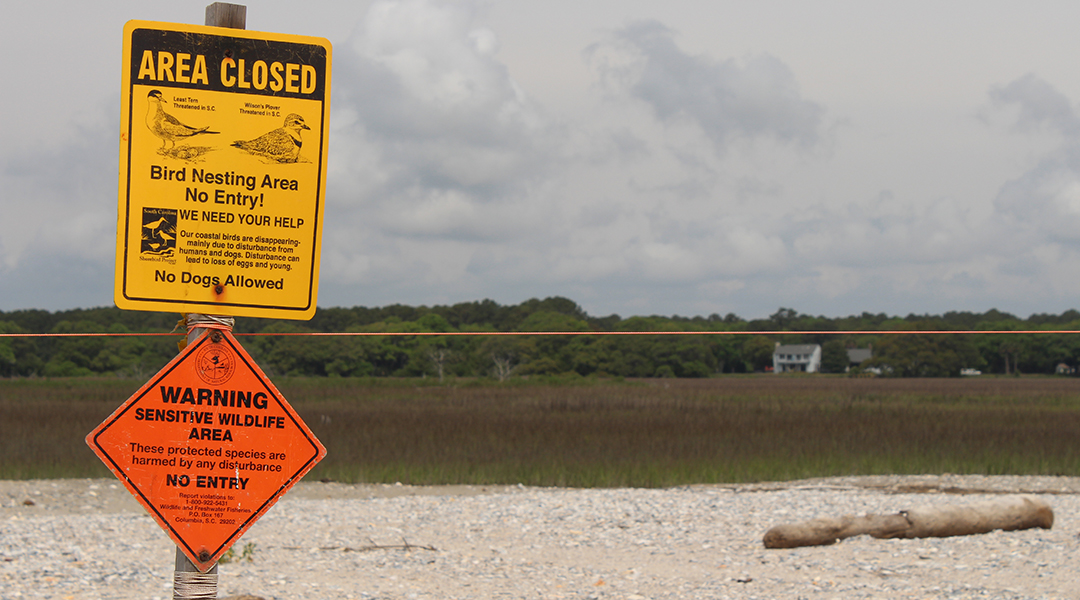 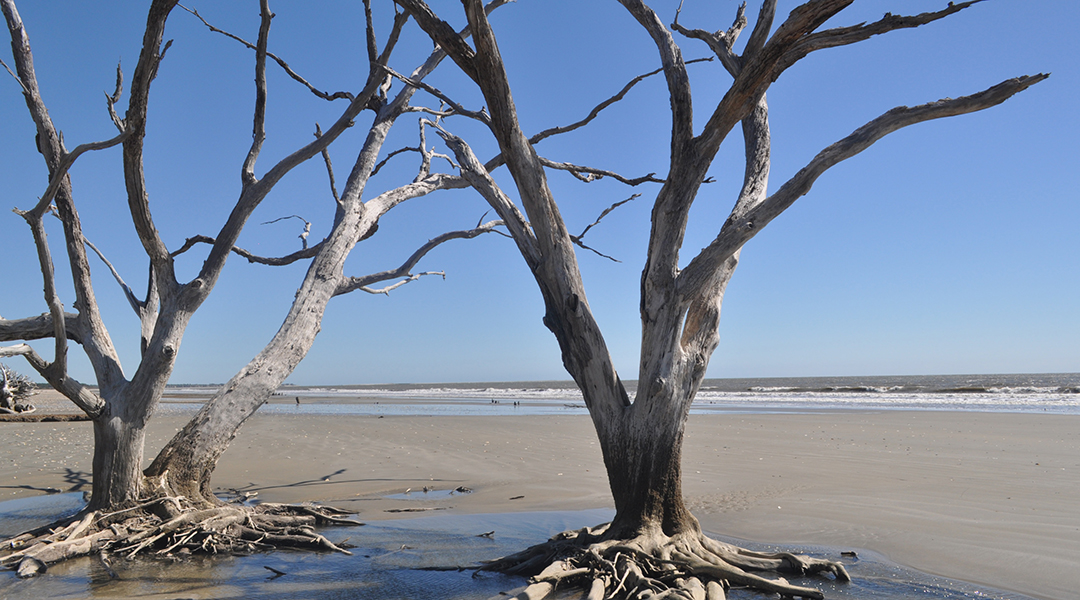 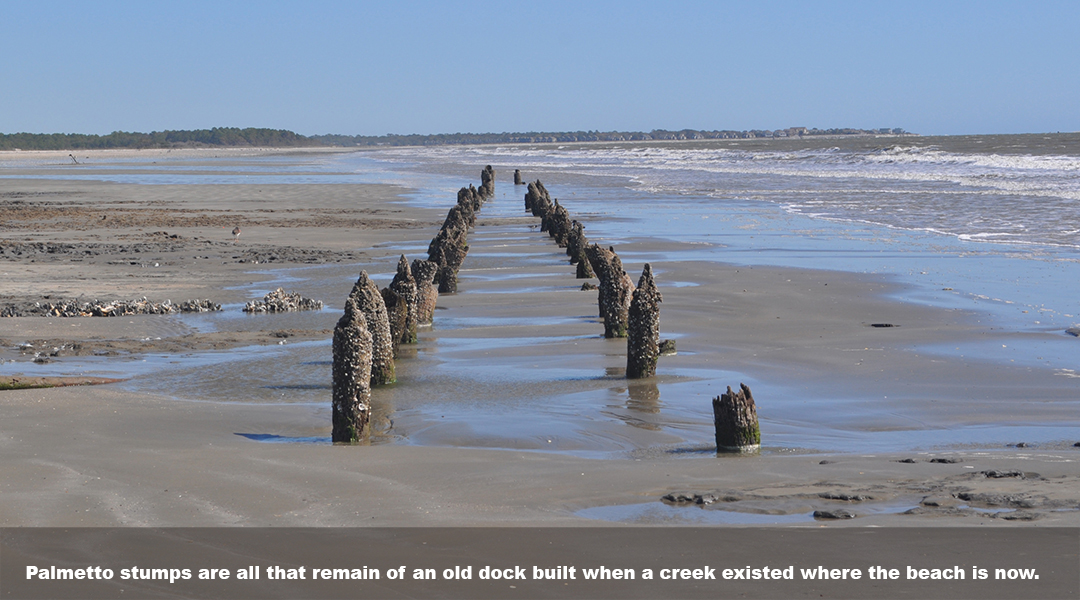 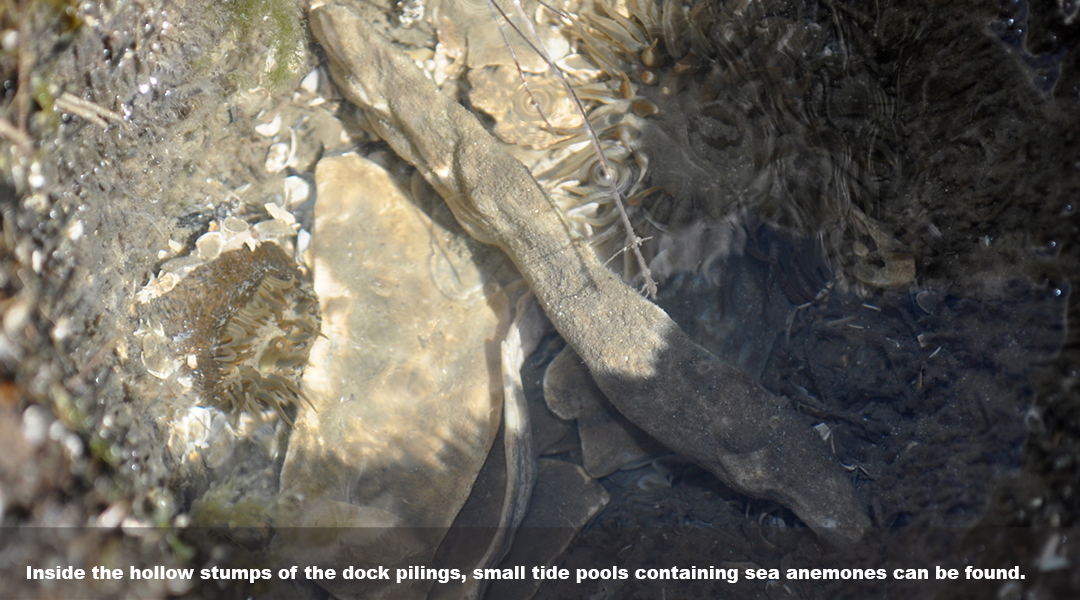 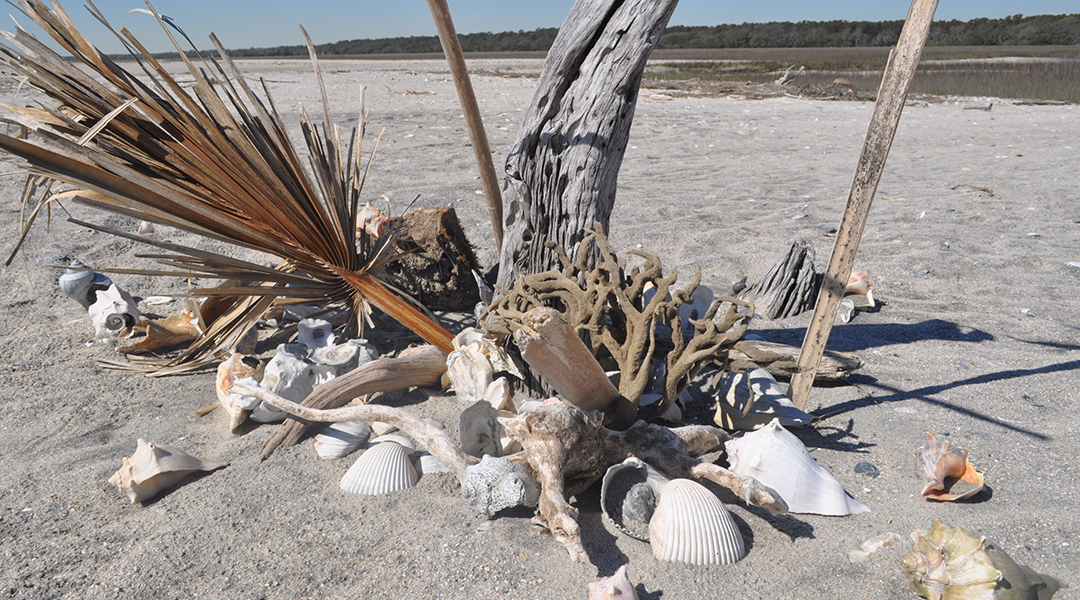 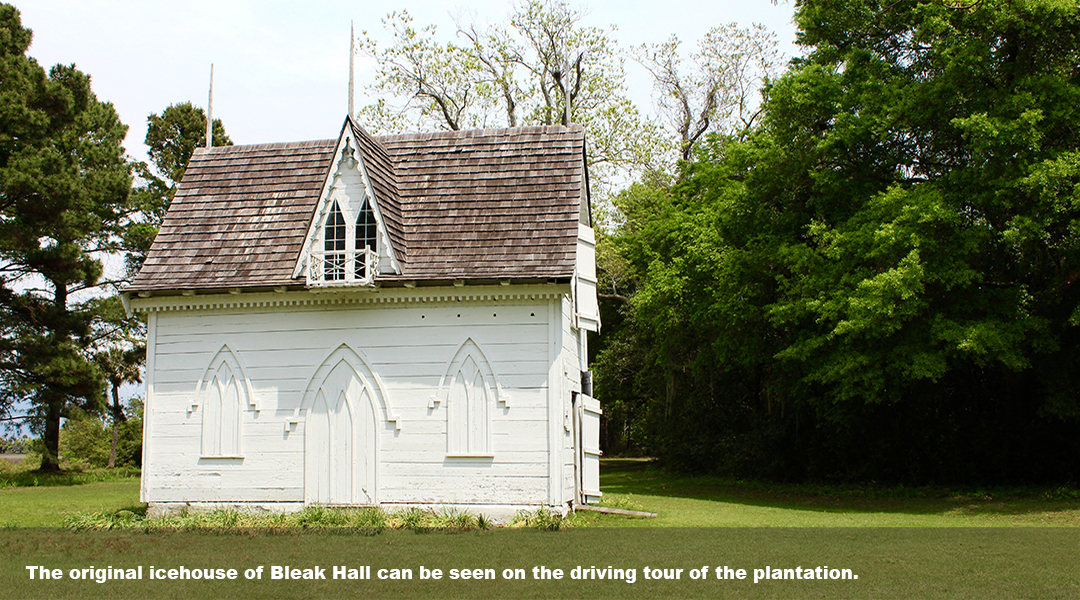 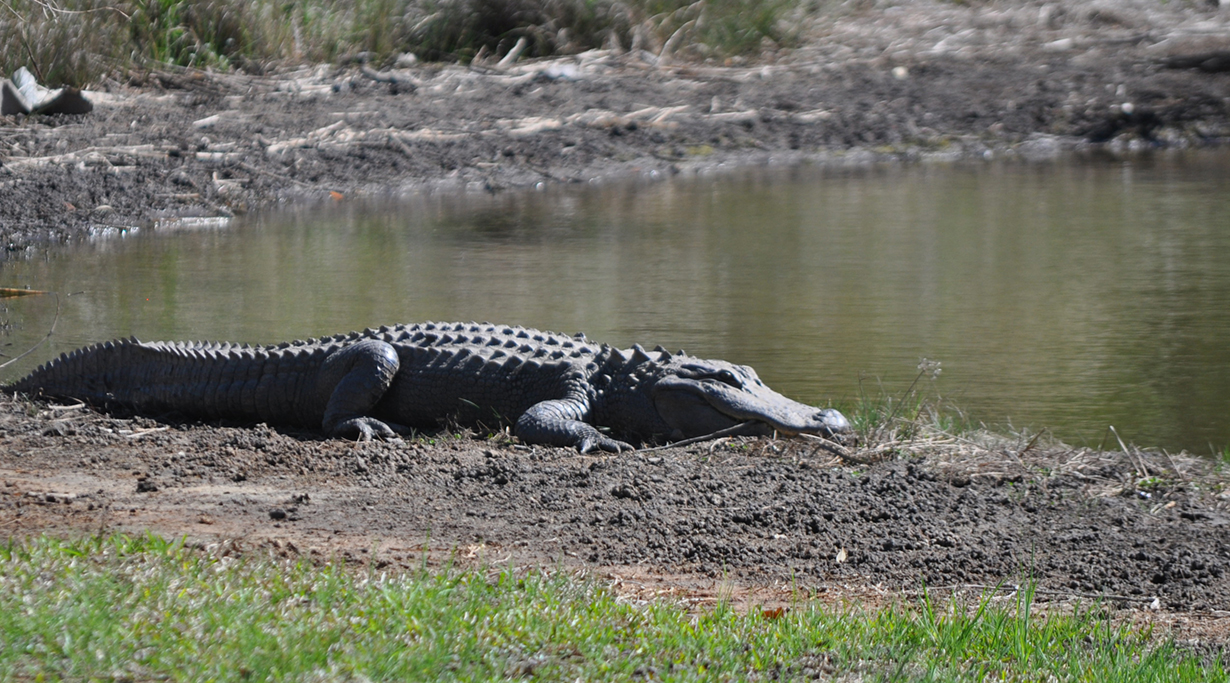